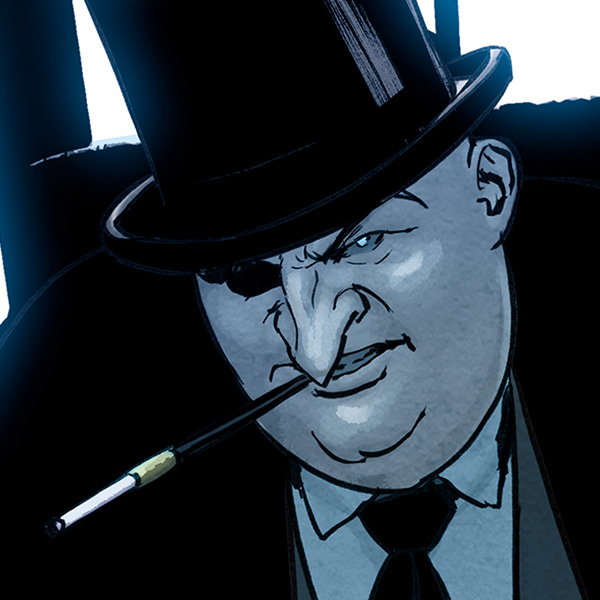 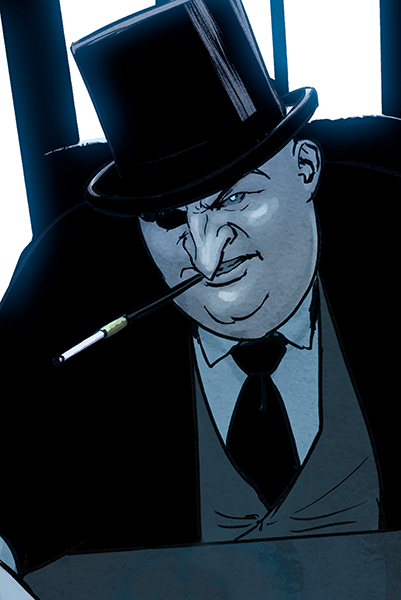 Despite his mocking nickname and less-than-intimidating physicality, Oswald Cobblepot rules his underground empire as a self-proclaimed "Gentleman of Crime"

Despite his mocking nickname and less-than-intimidating physicality, Oswald Cobblepot rules his underground empire as a self-proclaimed "Gentleman of Crime"

Not many villains in Gotham City can be touted as both dapper and dangerous but there is one name that definitely fits the bill: the Penguin. Methodical, strategic and deadly with a tricked-out umbrella, the Penguin is a fowl-like fiend whose monocled-eye is always watching the Dark Knight.

Born into one of Gotham’s first and influential families, Oswald Chesterfield Cobblepot was anything but fortunate growing up. Short, rotund and with a beak-like nose, his odd physique resembled that of a certain black and white flightless bird and everyone from classmates, peers and even his brothers made sure he knew it by calling him “Penguin”. Well, if the name fits—wear it. And Oswald did more than just wear it; he lived it, turning years of ridicule into revenge, one plot at a time.

With a family name already tainted by corruption, it wasn’t hard for the Penguin to turn to a life of crime. Dressed from head to toe in a tuxedo and top hat, he dealt in legitimate business ventures, all of which served as a cover for criminal interests. An extensive network of illegal ties in and around Gotham gave the Penguin access to crucial information at any given time and of which he could use to manipulate and blackmail others to his own willful desires. Especially when flanked by an army of henchmen. His curiosity for technology has led to an impressive array of penguin-inspired gadgets that can only be rivaled by Batman’s own collection. But the Penguin isn’t one to let his high-tech weapons have all the fun. Even this mastermind loves a good physical face-off, if it means silencing the Bat for good.

Before he became his alter ego, the Penguin, he went by his given name Oswald Cobblepot. Various narratives of his early years have been told, among them, how Oswald turned to a life of crime after neighborhood bullies killed every single animal in a pet shop his mother owned. In another account, his mother insisted that Oswald carry an umbrella with him at all times, for fear that he would fall victim to the same fate as his father, who died from pneumonia. Yet the common denominator remained the same, a childhood riddled by incessant teasing slowly ebbed away any goodness he had left and helped pave the road to a life of crime and evil.

Decked out in a tuxedo, top hat and wielding an umbrella, the Penguin made his debut at an art gallery where he bumped into Batman and Robin. Little did the Dynamic Duo know, he had stolen and smuggled a pair of priceless paintings into the hollow handle of his umbrella. After joining one of the biggest racketeers in the city, he embarked on a spree of robberies. When word leaked that he and the gang were hitting up the Stahl auction house to steal a jade idol, Batman arrived on the scene to thwart their thieving plans. But the Penguin, who anticipated his presence, gassed him with a trick umbrella and framed Batman for stealing the jade idol. As police arrested Batman and drove him away, a car driven by Penguin’s men careened right into their police vehicle to break out Batman and make it appear that he truly was guilty. Despite being tied up at Penguin’s home, Batman was able to communicate to Robin via Morse Code and the Boy Wonder rescued him. Together they were able to bust another stolen jewelry attempt. As Batman gave chase to the dirty bird, the Penguin fled on an express train and managed to escape.

The Penguin brandishes a series of high-tech, trick umbrellas with built-in concealed weapons. From flamethrowers and poison gas to rifles and knives, the Penguin’s umbrellas are his weapons of choice to aid in his criminal undertakings.

He has developed some skill in boxing but when close combat isn’t an option, he also employs deadly bird-themed inventions such as animatronic birds and the Penguin-Blimp, both of which were introduced in 1963's BATMAN #155. 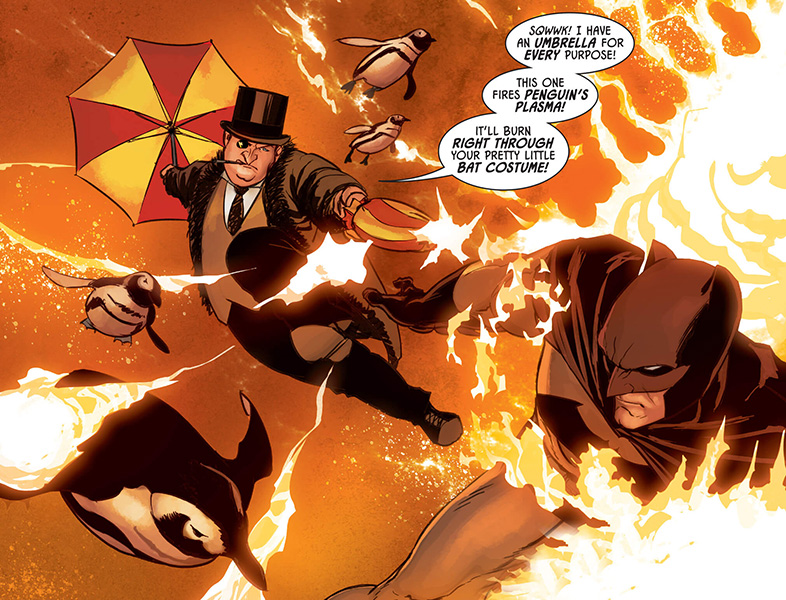 What the Penguin lacked in looks, he more than made up for in strategy and has stumped Batman on more than one occasion. Using his high-society status as a facade, he is able to mask his nighttime criminal affairs. His strong underworld connections allow the Penguin to hire out assassins, additional henchmen and spies when the plan calls for it. 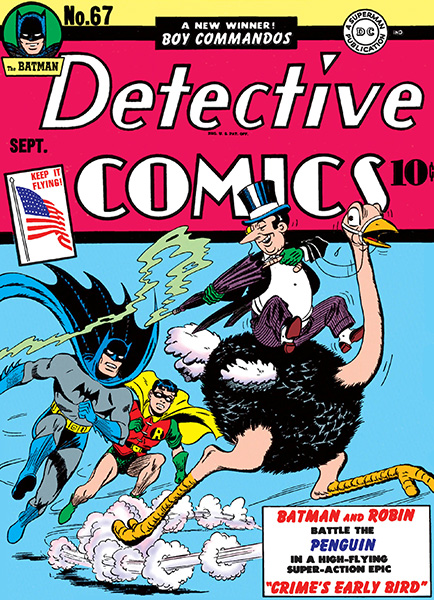 The Penguin first appeared in 1941's DETECTIVE COMICS #58 as a short and stubby, pointy-nosed man dressed to the nines and carrying an umbrella. Stealing a priceless painting right under Batman’s nose, this classy criminal went on to become the ringleader of a string of robberies and in a genius move, framed Batman for theft during one of those attempts. Although Batman was later exonerated and prevented the Penguin from further executing his plan, the “gentleman of crime” was able to escape and cemented his status as a worthy adversary of Batman.

When the Penguin was captured and tossed into prison once more, in 1944's BATMAN  #25, he found himself in the company of his new cellmate—the Joker. As the two arch-criminals bantered back and forth as to who would rule Gotham’s underworld, they eventually struck a wager: whoever steals the Van Landorpf Emerald claims his right to remain in Gotham City. After breaking out of prison, they both set off to make plans of stealing the Emerald. When Batman caught wind of their escape, he and Robin set a trap for them and their gangs. To avoid capture, Penguin and the Joker teamed up, a first for these two iconic villains, to take on Batman and Robin. Although they had to abort mission of stealing the Emerald, they discovered a newfound respect for each other’s talents and formed a full partnership. Gotham was no match for this dastardly duo as crime and corruption swept the city. During another attempt to apprehend the Penguin and the Joker, Batman and Robin were captured instead and taken to their shared hideout. When they couldn’t agree on how to kill the Dynamic Duo, Batman took advantage by pitting them against one another. Their puffed up egos and stubbornness contributed to their own demise as Batman and Robin freed themselves and beat their longtime foes into submission. 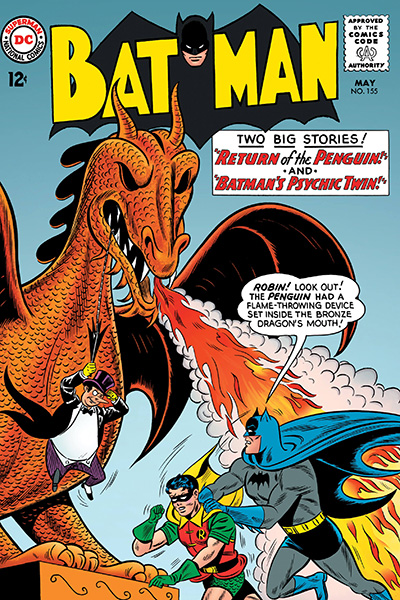 During the Silver Age, the Penguin returned in 1963's BATMAN #155 to renew his battle of wits with Batman. After serving time in jail, the Penguin was released but did not receive the homecoming he expected. Hoodlums began goading him, calling him a has-been and to prove it otherwise. Determined to shake their taunts, the Penguin initiated a new wave of bird-inspired crime in Gotham City. These activities attracted the attention of Batman and Robin who both quickly got on his tail. Picking up on his fowl-patterned deeds, Batman and Robin were steps ahead of the Penguin’s next bird-crime and were able to stop him before he stole pieces from a museum. 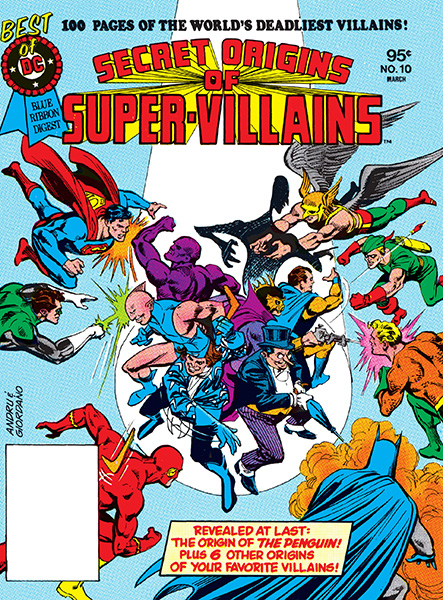 Nearly 40 years after his debut, the Penguin finally got an origin that introduced his overbearing mother, as stated in 1981's THE BEST OF DC #10. As a young boy, Oswald lived in the family bird shop with his mother who had fallen gravely ill. She insisted that her son carry an umbrella at all times, the direct result of her husband being caught in a thunderstorm and dying from bronchial pneumonia 2 weeks later. With an odd name and an even odder body shape, the umbrella was the perfect accessory to garner even more insults. Nonetheless, Oswald attended college and majored in ornithology to complement his love of birds. When Mrs. Cobblepot passed away, Oswald inherited her mountain of debt. To make matters worse, creditors seized the shop and birds living inside. About ready to crack, Oswald turned toward a life of crime, seeking revenge for his tragic youth. 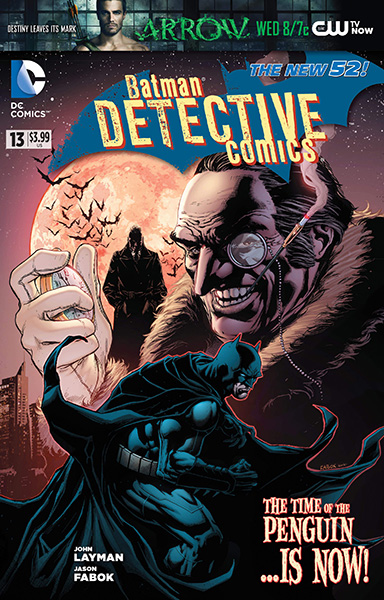 In the New 52 storyline “Emperor Penguin”, Oswald Cobblepot was a crime lord in Gotham City and owner of the Iceberg Casino, a place of pleasure and dirty business. Tired of the citizens thinking he was scum, he decided it was time to leave a more permanent mark. It was time that they loved him. With money and of course, force, Oswald persuaded the director of the Neville Community Center to change the new wing from Wayne to Cobblepot. When it was announced, he received praise all around. The cherry on top was him stopping a hit on Bruce Wayne. His plan seemed to go swimmingly until he was called away to help a friend in Arkham. In his absence, his right-hand man Ogilvy was to temporarily oversee his operations. But Ogilvy had an agenda of his own. Calling himself Emperor Penguin, he took control of Penguin’s casino, gang and assets. Rocked by betrayal when he returned, Penguin tried to attack Ogilvy’s new empire, but Batman prevented that plan and the police took him into custody. 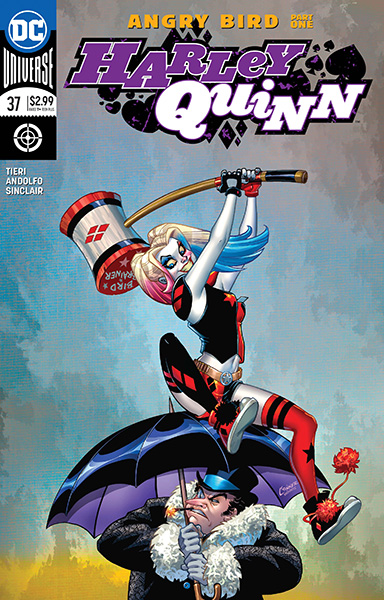 This rogue’s reboot included teaming up with a few other lords of organized crime. Together, Penguin, Black Mask and Great White Shark formed an unholy trinity known as “The Black & Whites”. With a common goal, they met with KGBeast, one of the best assassins, and hired him to kill Batman. He agreed so long as they cleaned up the mess he would leave in his wake. As the mayhem began, Great White Shark was concerned about what KGBeast would do to them if he knew they couldn’t pay what they promised him. Penguin told him to leave those worries to him.

Aboard the Silver Dollar Casino boat, KGBeast was holding Batman and Harvey Dent captive. The Black & Whites were also present and Penguin demanded that Harvey give them the access code to his blackmail files. Suddenly there was an explosion, and Batman and Harvey Dent got away. The casino boat, no longer anchored, started to drift toward the river falls. But Batman stopped the boat from going over and the trio went underground.