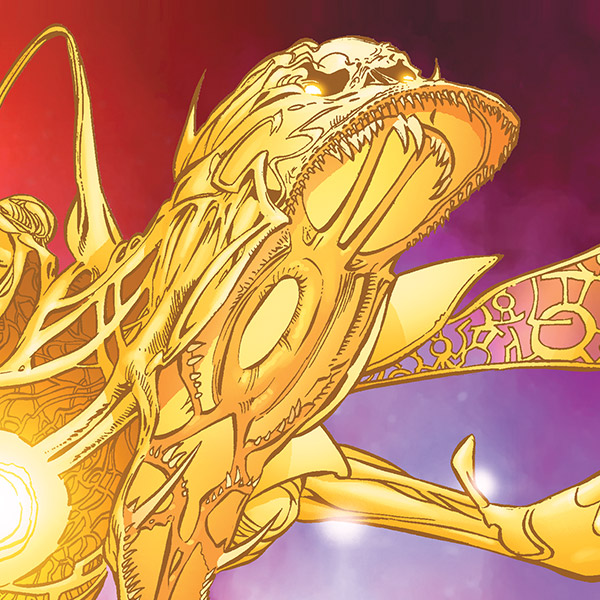 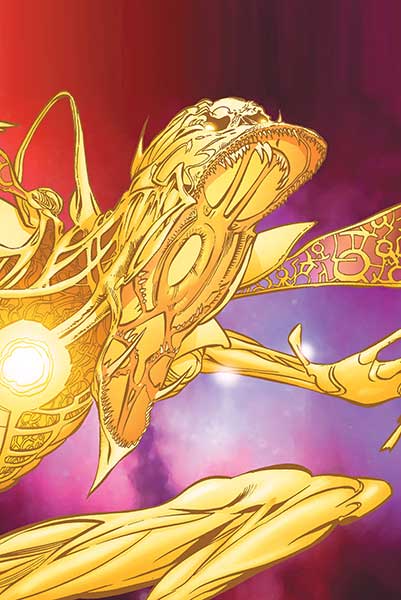 One of the greatest threats to the universe is the fear-fueled entity known as Parallax, the ages-old enemy of the Green Lantern Corps.

One of the greatest threats to the universe is the fear-fueled entity known as Parallax, the ages-old enemy of the Green Lantern Corps.

When the universe was young, an insect-like creature was the first sentient life to experience terror. This creature was called Parallax, who became the embodiment of the yellow energy of fear. After causing several civilizations to destroy themselves, Parallax was imprisoned for millennia. But it was able to escape by possessing the heroic Green Lantern warrior named Hal Jordan. Hal was later freed from Parallax’s influence, but since then the monster has escaped imprisonment time and time again – eager to increase its power by spreading terror to all life. 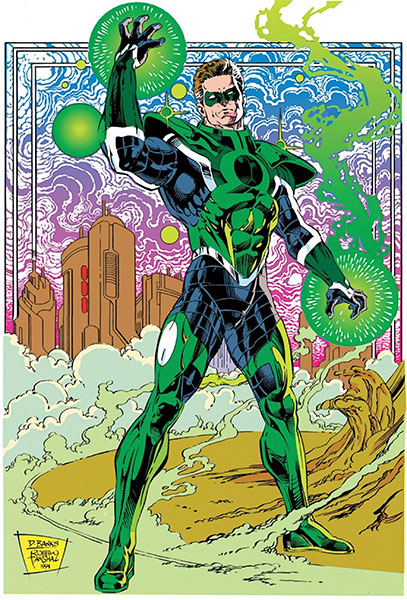 Just as there is an electromagnetic spectrum that includes light and radiation, there is an emotional spectrum created by the feelings of all sentient life. Each major emotion of the spectrum corresponds to a color and has an avatar, a creature that embodies its power and nature. Parallax was the first sentient life form to experience terror and wound up evolving into the embodiment of the yellow energy of fear.

Traveling throughout the cosmos, Parallax inspired panic and paranoia in different civilizations, causing them to turn on each other until their worlds were wastelands. Meanwhile, on the planet Maltus, a group of immortals declared themselves Guardians of the Universe (to atone for the crimes of the corrupt Maltusian scientist Krona). The Guardians stopped Parallax so it could do no more harm, imprisoning its essence inside the Central Power Battery they built on the planet Oa. This Central Battery accessed the green energy of will power and housed the will power avatar called Ion. With the Central Power Battery, the Guardians provided power to the personal batteries and rings of their troops, the Green Lantern Corps

Cut off from the outside world, Parallax went dormant. Its presence, however, weakened the power of the Green Lantern rings against anything colored yellow. Due to the presence of Parallax in the Central Battery, the Guardians only recruited those with the willpower to overcome great fear, and thus master the power ring. They kept the creature’s existence a secret. Over time, they simply referred to Parallax as a “yellow impurity” that existed within the Central Battery and all rings. But thousands of years later, the Lanterns would learn the truth (Green Lantern: Rebirth vol. 1 #1, 2004).

Parallax is a creature of fear-based energy and can’t be harmed by standard physical methods. Parallax can alter its size and appearance, produce energy blasts, and mentally sense and enhance the fears of others. It can also create illusions or hard-light constructs. Although these constructs and illusions are often colored yellow, with intense concentration Parallax can have them take on different colors.

Parallax is empowered by the fear in people around it, while a lack of strong fear will disrupt its power. The presence of Blue Lantern hope-based energy will also disrupt its power, as hope is the natural enemy of fear.

Parallax often takes organic beings as hosts so it can better focus its power. Parallax can only take possession of a person if they’re experiencing strong fear, and some have been able to resist its control. 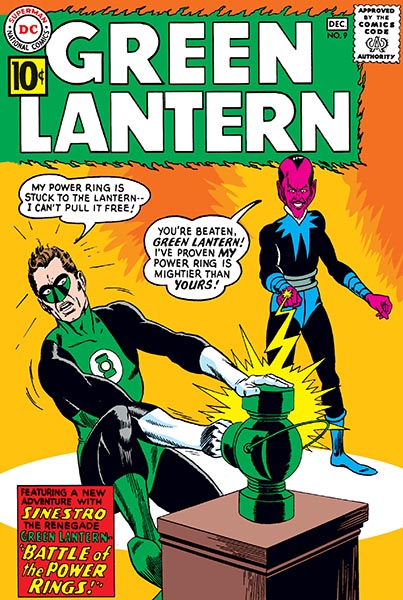 Millennia after Parallax’s imprisonment, the Green Lantern called Thaal Sinestro concluded that the Green Lantern Corps could not properly ensure order unless they became leaders of their territories and instilled fear in their populaces. After learning of Sinestro’s corruption, the Guardians banished him to the planet Qward in the anti-matter universe. There, Sinestro had a new ring constructed, which utilized yellow energy and drew power from Green Lantern rings. Unknowingly, Sinestro now tapped into the fear part of the emotional spectrum, stirring Parallax awake.

Sinestro fought many battles against the Green Lanterns. After Sinestro destroyed entire planets, the Corps executed him for his crimes (Green Lantern Corps vol.1 #222, 1988). But the villain found a way to transmit his essence into the Central Power Battery. There, Sinestro met the yellow impurity and found a way to disrupt the powers of the Green Lanterns. Hal Jordan journeyed into the Central Power Battery and defeated Sinestro, leaving his spirit imprisoned there, but was surprised to hear a voice claiming to be the yellow impurity. He returned to the outside world without learning Parallax’s true nature (Green Lantern Corps vol.1 #222 – 224, 1988).

With Sinestro’s help, Parallax mentally influenced Earth’s Green Lantern Hal Jordan during moments of doubt, making him less certain about his actions. While Hal was away from Earth, his home of Coast City was completely wiped out by the villains Mongul and Cyborg Superman. Parallax took advantage of the emotional trauma by pushing Hal further (Green Lantern/Sinestro Corps: Secret Files and Origins #1, 2008). 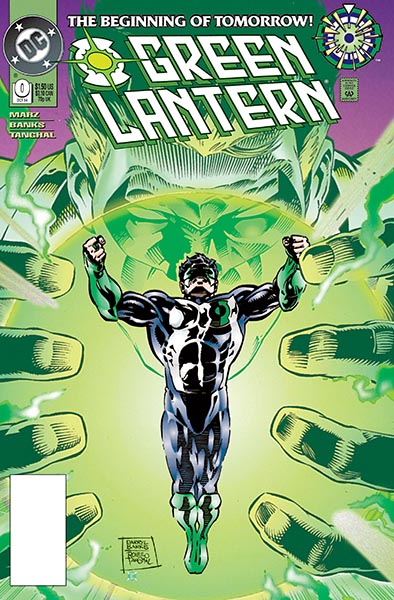 Now obsessed with resurrecting Coast City, Hal journeyed to Oa and absorbed the energy of the Central Power Battery, destroying it in the process. This freed Sinestro and Parallax while rendering all green rings powerless. Destroying his own ring, he declared his new name was “Parallax.” No one, including Hal, would realize until years later that Parallax was actually a separate entity now in possession of Hal’s mind (Green Lantern vol. 3 #48 – 50, 1994).

Hal’s ring was reconstructed and re-powered, then given to his fellow Earthman Kyle Rayner. Because Parallax wasn’t tied to the power source behind this last remaining green ring, Kyle Rayner had no difficulty affecting anything colored yellow.

When a Sun-Eater creature threatened all life on Earth, Kyle Rayner sought out Hal Jordan for help. His true personality resurfacing, Hal used Parallax’s power to reignite the sun and destroy the creature while sacrificing himself (Final Night #1 – 4, 1996).

Hal’s spirit wandered aimlessly in limbo, still bound to Parallax. The Spectre, an angel of vengeance, offered Hal the chance to be its partner in fighting evil on Earth, just as it had partnered with other human souls over the years (Day of Judgment #1 – 5, 1999). For a time, Hal operated as a ghostly avenger, writing wrongs and punishing criminals.

Eventually, Kyle Rayner discovered the truth about Parallax and the emotional spectrum. The Spectre then revealed it had bound itself to Jordan’s soul in order to exorcise Parallax. After finally doing so, the Spectre severed its connection to Jordan; who was then resurrected, his mind free of fearful influence for the first time in years.

Now that the truth was known, Parallax and Sinestro made another move for power. But they were fought by Hal, Kyle Rayner and other Lanterns. In the end, Parallax was imprisoned within the new Central Power Battery on Oa and the Green Lantern Corps was reformed (Green Lantern: Rebirth, 2004). Parallax’s presence restored the weakness to yellow, but adept and experienced Green Lanterns were able to overcome this impurity by accepting their capacity for fear, an exercise known as the Parallax Fear Anomaly. 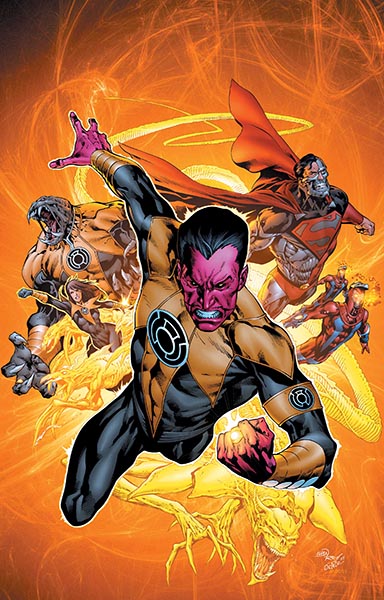 Parallax was later freed again so Jordan could use it as a weapon during 2010’s Blackest Night. Afterward, Parallax was transported away by the renegade Maltusian scientist Krona (Green Lantern vol. 4 #60, 2010). Krona again placed Parallax within the Central Power Battery. But the creature escaped again.

In the wake of 2011’s Flashpoint, though much of the DC universe’s continuity was reimagined, most of Parallax’s history remained intact. During this New 52 era, Sinestro became a host for Parallax and murdered almost all of the Guardians of the Universe. 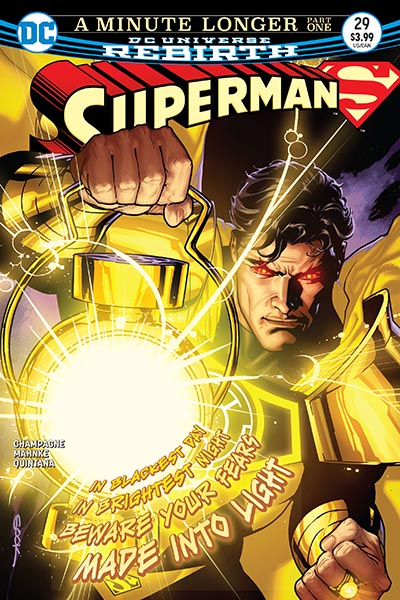 Following the events of 2016’s DC Universe Rebirth #1, much of the DC universe’s pre-New 52 history was restored. It’s unclear how much this has affected Parallax’s overall history, if at all.

In the Rebirth era, Hal Jordan destroyed the Sinestro Corps base, freeing Parallax (Hal Jordan and the Green Lantern Corps #1 – 7, 2016-17). Parallax then made its way to Earth, kidnapping and terrorizing children to feed off of their fear. In the end, Superman defeated Parallax and imprisoned the creature within Sinestro’s yellow ring, which he then gave to Hal Jordan (Superman vol. 4 #29 – 30, 2017).