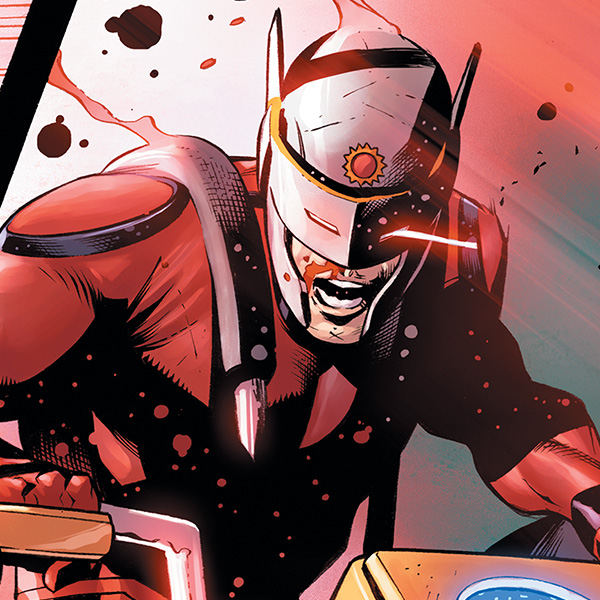 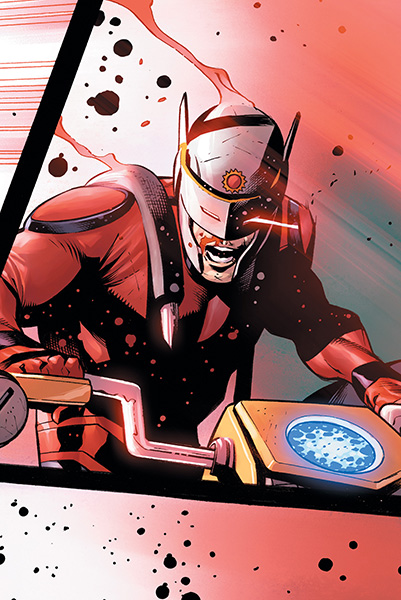 The son of Darkseid, but raised by High Father on New Genesis, Orion is the apotheosis of "nature versus nurture" in the world of the New Gods.

The son of Darkseid, but raised by High Father on New Genesis, Orion is the apotheosis of "nature versus nurture" in the world of the New Gods.

There came a day when the Old Gods died. But from the ashes of their world, the twin planets of New Genesis and Apokolips emerged—and went to war. A truce came about when Izaya, Highfather of New Genesis, and Darkseid, the despotic ruler of Apokolips, traded their infant sons as hostages.

Darkseid’s son Orion was raised to understand the ways of peace and love, and chose to fight for the cause of life with his great strength and the power of the Astro-Force. Whether alone, aided by Earth’s Super Heroes or fighting alongside his fellow New Gods, Orion will stop at nothing to halt the evil schemes of his father Darkseid the Destroyer and protect all reality from his domination.

There was once a race of beings called the Old Gods. Their home was the Godworld, a planet known to some as Urgrund and others as Galacia (GREEN LANTERNS vol. 1 #28, 2017). The Old Gods’ wars destroyed them and their world. Its remains became two new planets: New Genesis and Apokolips. New Genesis gave birth to humanoid “bugs” who eventually formed the Insect Empire, as well as powerful New Gods who were connected to the Source, the energy behind all life. The dark planet Apokolips gave birth to other humanoid forms and to the dark New Gods, who sought only to conquer (NEW GODS vol. 1 #1, 1971). 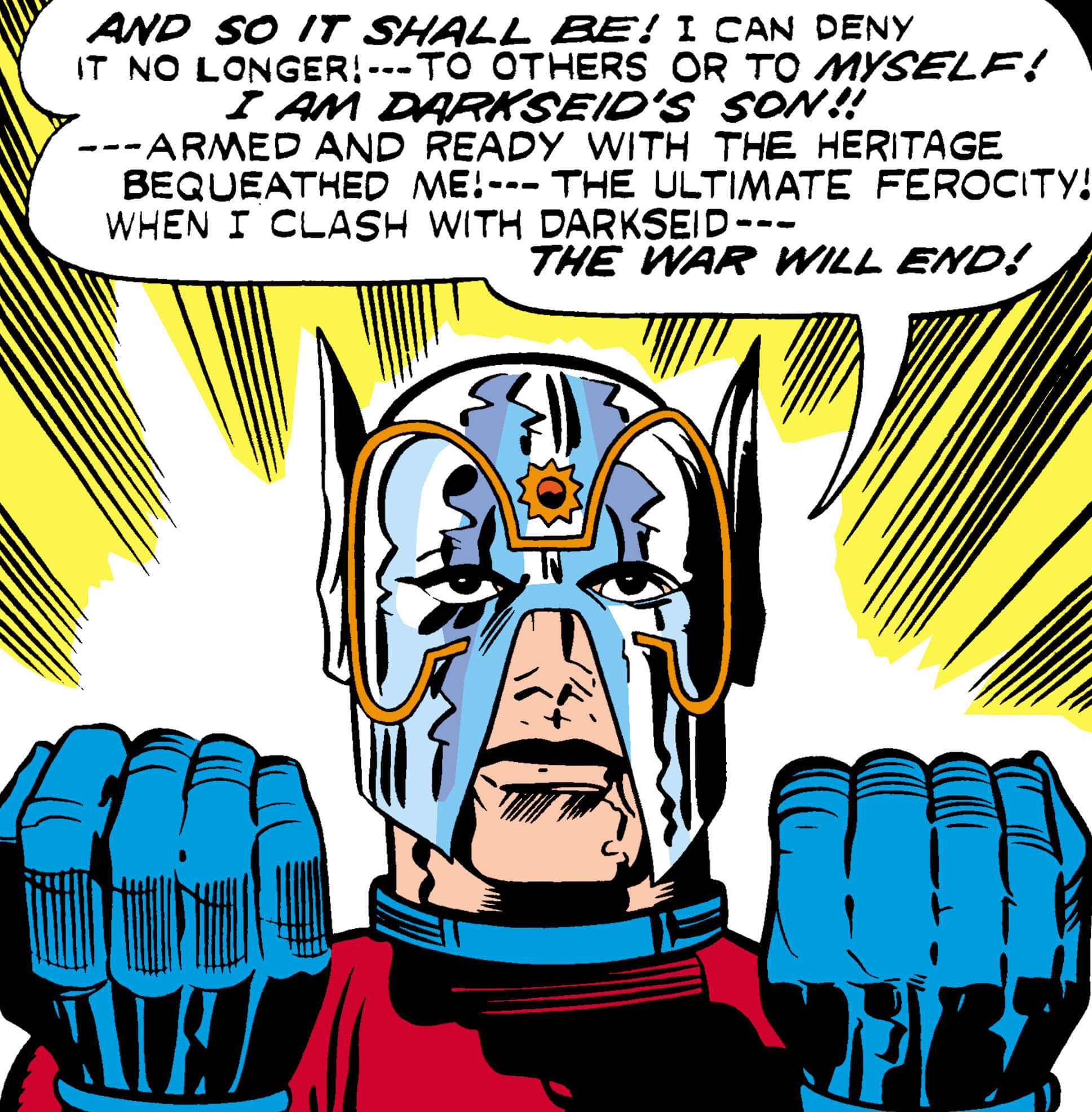 After long years of war, Izaya, the leader of New Genesis, also known as Highfather, agreed to a truce with Darkseid the Destroyer, dictator of Apokolips. The truce involved an exchange of infant sons as hostages. Izaya’s son was taken to the harsh orphanage of Apokolips, where his skill at escaping death traps earned him the name “Scott Free.” Meanwhile, Izaya raised Orion, the son of Darkseid and his imprisoned wife Tigra (NEW GODS vol. 1 #7, 1972).

Growing up, Orion wrestled with bouts of rage and a talent for violence. Though he felt like an outsider among the New Gods, Orion was loved by Highfather and wasn’t without friends. The New God called Lightray became Orion’s most trusted comrade-in-arms, while Lonar was one of the few people who could make him laugh (FOREVER PEOPLE vol. 1 #5,1971).

Orion largely mastered his rage, and learned to tap into the extradimensional Astro-Force to deliver devastating attacks. He became a formidable warrior, a “Dog of War” dedicated to stopping Darkseid (NEW GODS vol. 1 #1, 1971). During his battles, he became allies with Scott Free (now living on Earth and calling himself Mister Miracle) and his wife Barda (a former soldier of Apokolips who defected), as well as with the Justice League of America. In his war against Darkseid, Orion has even fought alongside people he doesn’t truly trust, such as Metron (a New God scientist who claims to be from neither New Genesis nor Apokolips) and Forager (a champion of the Insect Empire). 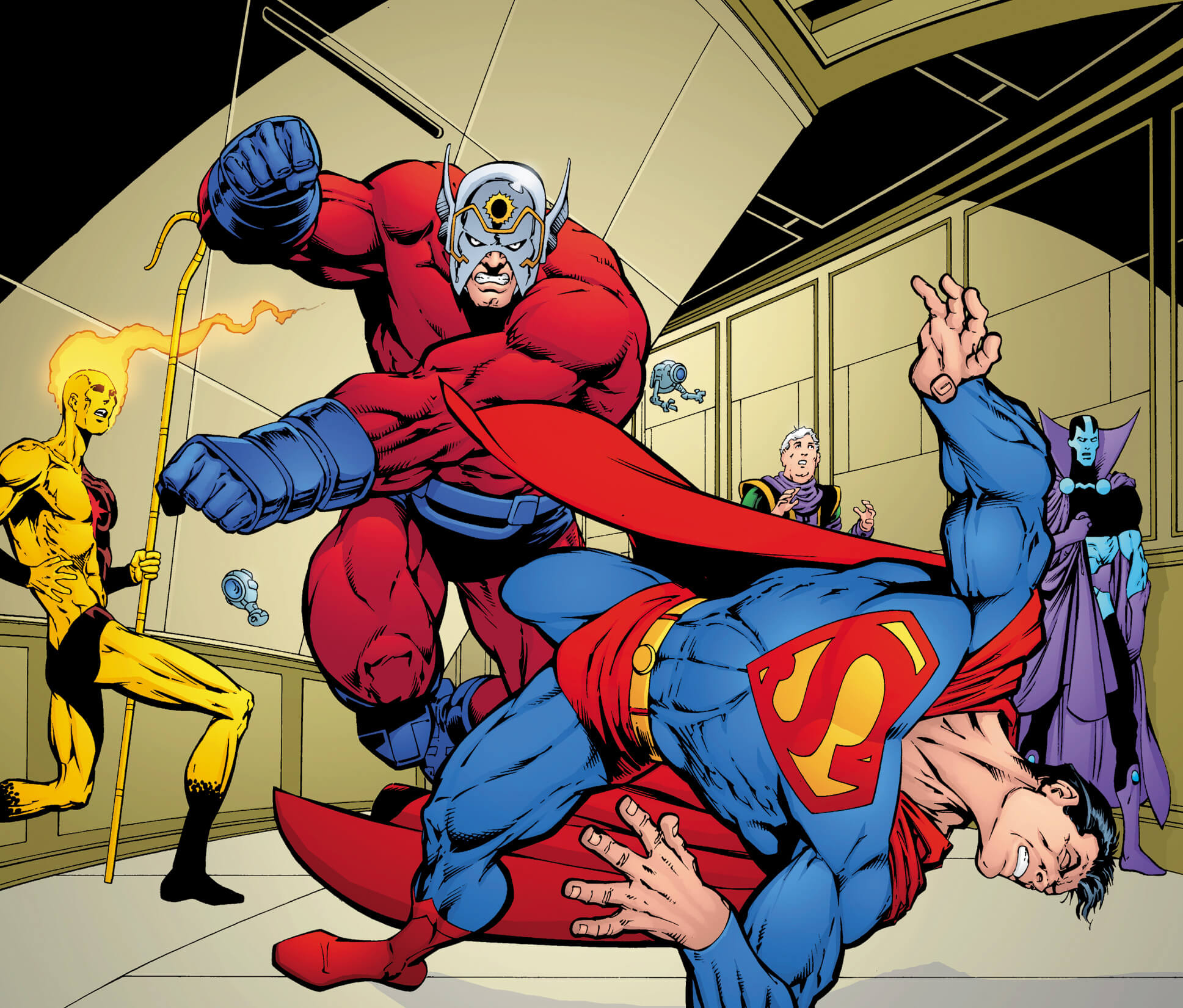 As one of the New Gods, Orion has a lifespan of millennia and is immune to Earthly illnesses. Orion is a particularly powerful New God, with levels of physical strength, speed, stamina and resistance to injury that rival those of Superman.

Orion can tap into the Astro-Force, an energy field of immense power tied to the Source. Orion focuses the Astro-Force through his wristbands or his Astro-Harness. He can use it to increase his strength and healing ability, rearrange matter to a limited degree, create force fields and tractor beams and unleash intense blasts and shock waves. Powered by the Astro-Force, Orion’s chief mode of transport, the Astro-Harness, can fly at supersonic, suborbital and even light speed.

Like several New Gods, Orion carries a living computer called a Mother Box that directly links to the Source. It can create boom tubes (wormholes between Earth’s universe and the New Gods’ plane of reality). Orion’s Mother Box is often attached to his Astro-Harness and will repair it if it’s damaged. Orion’s Mother Box sometimes calms his rages, and alters his face to give it a more handsome, human appearance. When Orion flies into a rage, his features turn monstrous and he more closely resembles his father, Darkseid.

Like all New Gods, Orion can be killed by attacks that deliver more damage than his body and healing abilities can handle. He is also vulnerable to the “theo-toxic” element radion. 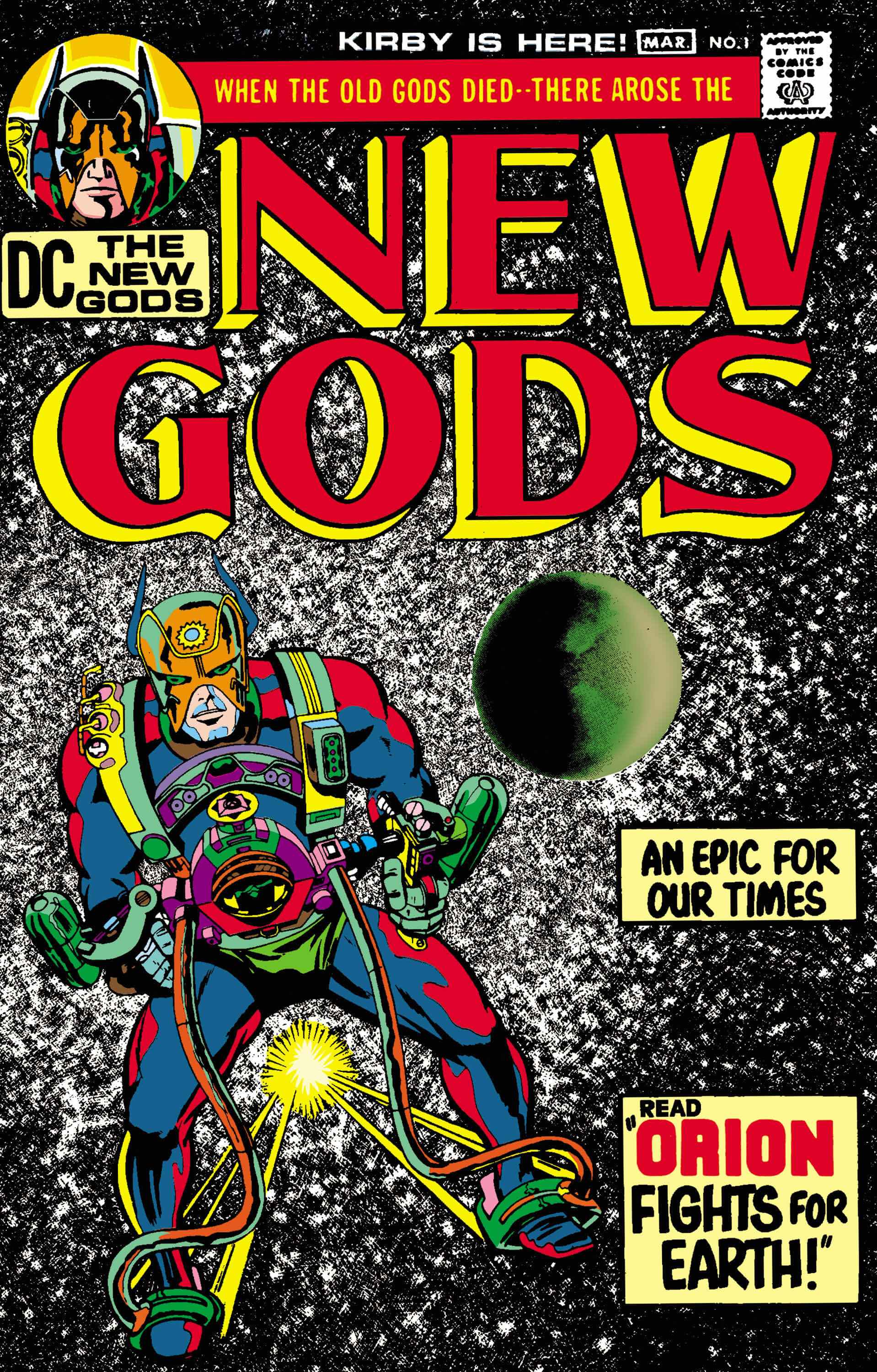 In 2005’s SEVEN SOLDIERS, it was revealed that Orion, Metron and other New Gods visited Earth when early human beings were just evolving. After these early visits, Orion did not spend much time on Earth again until the modern era, some time after Superman debuted.

For years Darkseid sought the Anti-Life Equation, a mathematical expression that could give its user the ability to bend others to their will (free will being the core aspect of life, according to the New Gods). Believing that parts of the Anti-Life Equation existed in the minds of human beings, Darkseid began secretly operating on Earth. When Orion learned of this, he secretly went to Earth to stop him, adopting the cover identity “O’Ryan” and recruiting several humans to his side (NEW GODS vol. 1 #1-6, 1971-1972).

At one point Orion, Lightray and Forager defended Earth from Mantis, a renegade of the Insect Empire who had allied with Darkseid so Earth could be his new colony world (NEW GODS vol. 1 #9-10, 1972).

Up until this point Orion was in denial about his true parentage and how much it affected his identity. But after fighting his half-brother Kalibak (born of Darkseid and a woman named Suli), Orion accepted his heritage and decided it was one more reason he was obligated to stop the dark gods of Apokolips (NEW GODS vol. 1 #11, 1972). 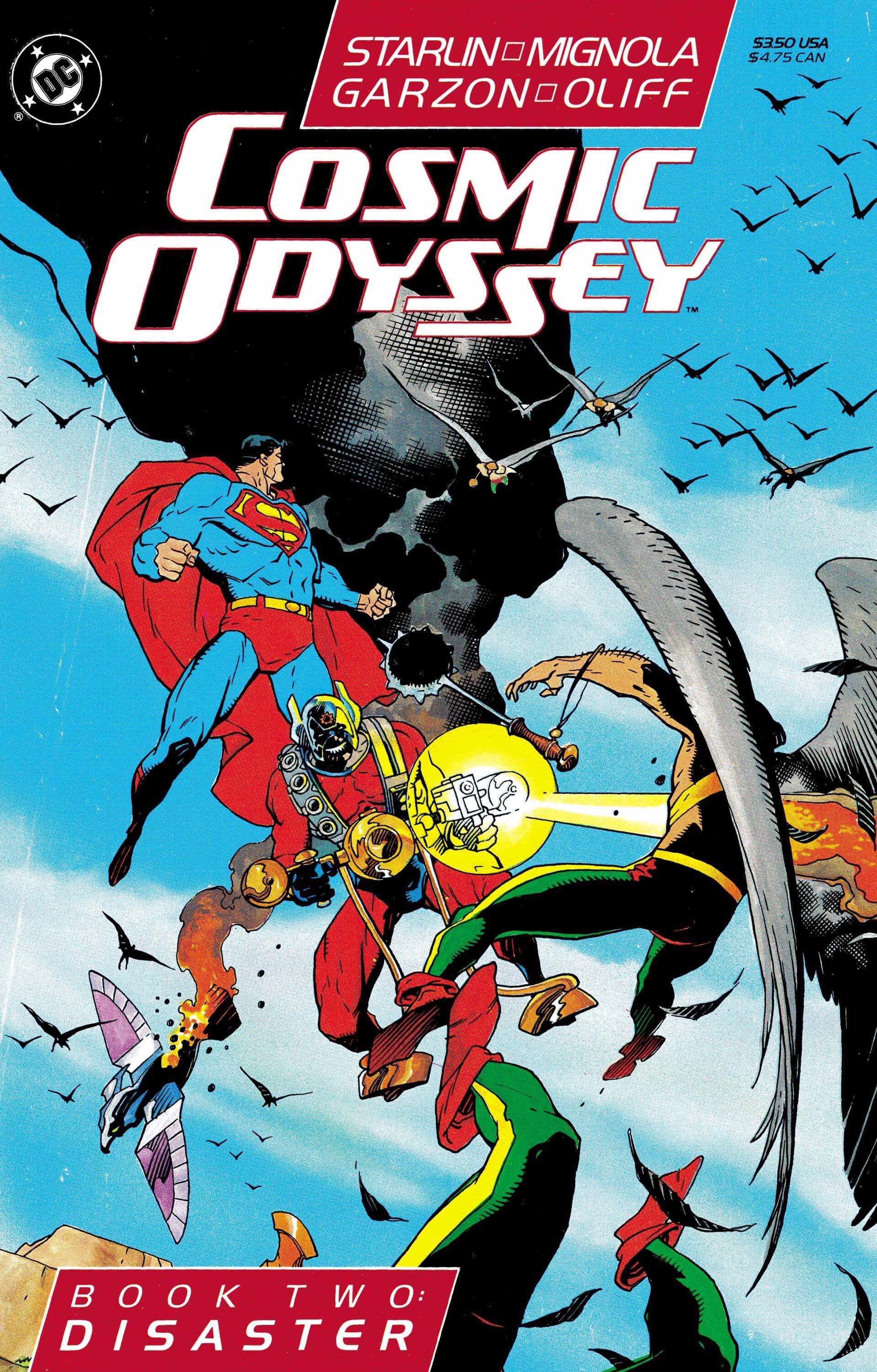 In 1988’s COSMIC ODYSSEY, Orion and Earth’s heroes fought against an Anti-Life Entity. Forager sacrificed his life to stop this Entity, and Orion took his body back to the Insect Empire. The Insect Empire appointed a new Forager, a female insect whom Orion came to admire. Through her, Orion confronted his prejudice toward the Insects and realized how the New Gods had oppressed them. Disillusioned, he wondered how much difference there really was between New Genesis and Apokolips (NEW GODS vol. 2 #3-4, 1989).

Mantis and his followers made another attack on Earth and unleashed nuclear missiles. Believing they had killed the new Forager, Orion took revenge by creating a boom tube that sent the missiles to the Insect Empire, wiping out much of the civilization. The new Forager then reappeared, appalled that Orion had killed innocent Insects along with those who had sided with Mantis (NEW GODS vol. 2 #4-5, 1989).

For a few months Orion and Lightray served in the Justice League of America, following the apparent death of Scott Free, who had served on the team for years (JUSTICE LEAGUE AMERICA vol. 1 #42-50, 1990-1991). Orion and Lightray also aided Superman and Earth’s heroes against the villain Brainiac in 1992’s PANIC IN THE SKY event.

Some time later Orion and Barda joined the newly reformed Justice League of America in order to help defend Earth from the coming of Mageddon, a great and powerful war machine that had survived the time of the Old Gods (JLA vol. 1 #16, 1998). Following Mageddon’s defeat, Orion and Barda left the group (JLA vol. 1 #41, 2000). 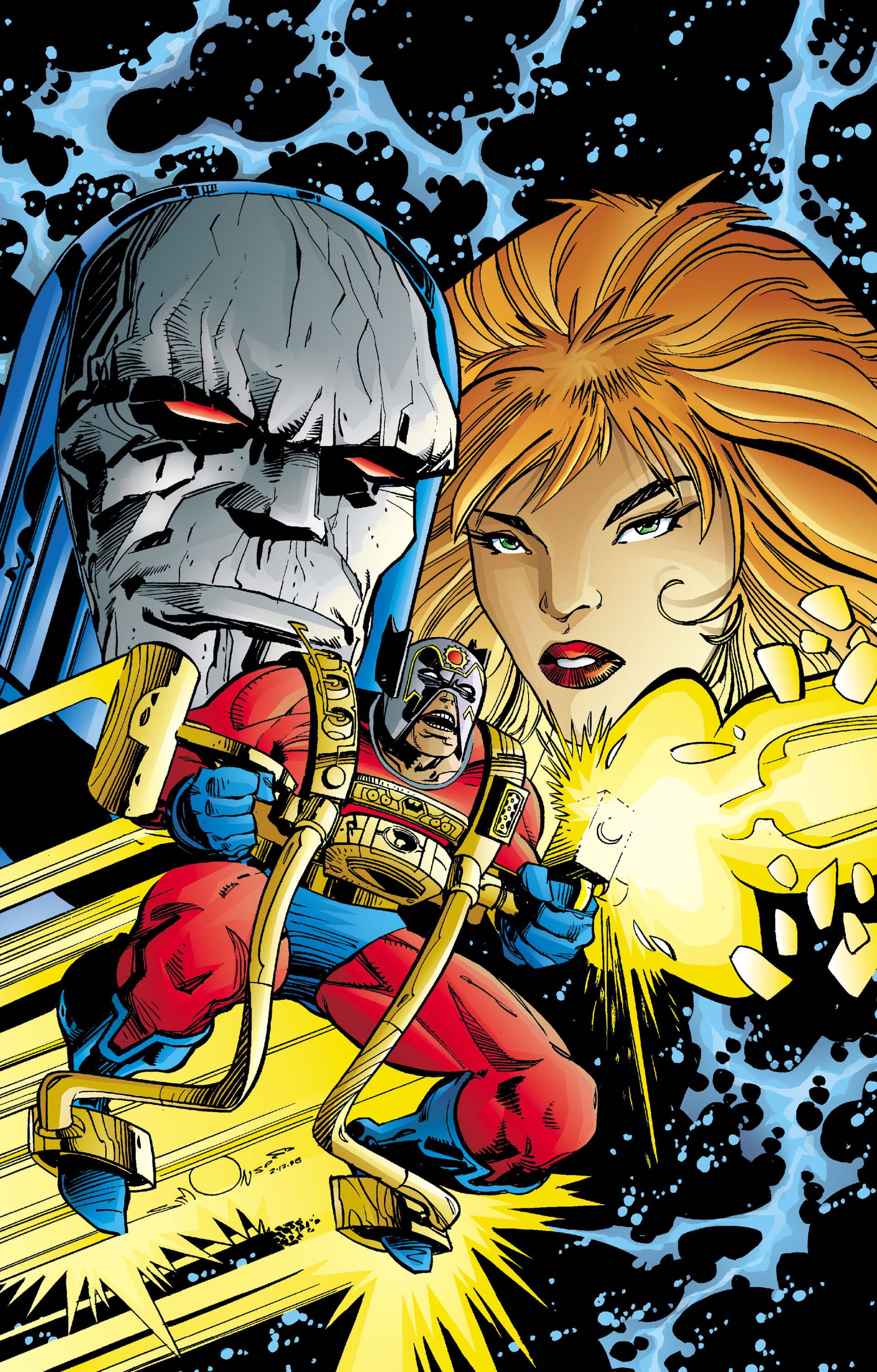 One day Tigra told her son Orion that he wasn’t actually Darkseid’s son and that his real father had been one of the dark god’s personal guards. This was a lie to trick Orion into finally abandoning any reluctance he still had about destroying his own father. Before she could see if her plan would work, Darkseid’s bomber troops known as the Suicide Jockeys attacked and killed Tigra. Eventually Orion realized his mother’s deception (ORION vol. 1 #1-2, 2000).

After Tigra’s death, Orion challenged Darkseid to single combat and won. As ruler of Apokolips, he tried to reform it into a more just world. He also learned the Anti-Life Equation and tried using it to bring peace. But Darkseid was still alive and had hoped this chain of events would convince his son to share his point of view. When Orion tried using the Anti-Life Equation to force Darkseid to kill himself, the dark god exiled his son from the universe. He then resumed his rule over Apokolips (ORION vol. 1 #5-15, 2000-2001).

Realizing he had lost his way and become corrupt, Orion surrendered the Anti-Life Equation from his mind, destroying a cosmic threat known as the Ecruos in the process (ORION vol. 1 #17, 2001). He then wound up on Earth. After talking with Scott Free, who also possessed the Anti-Life Equation but had sworn not to use it, Orion felt a renewed sense of purpose. He returned to his role as a warrior of New Genesis (ORION vol. 1 #25, 2002). 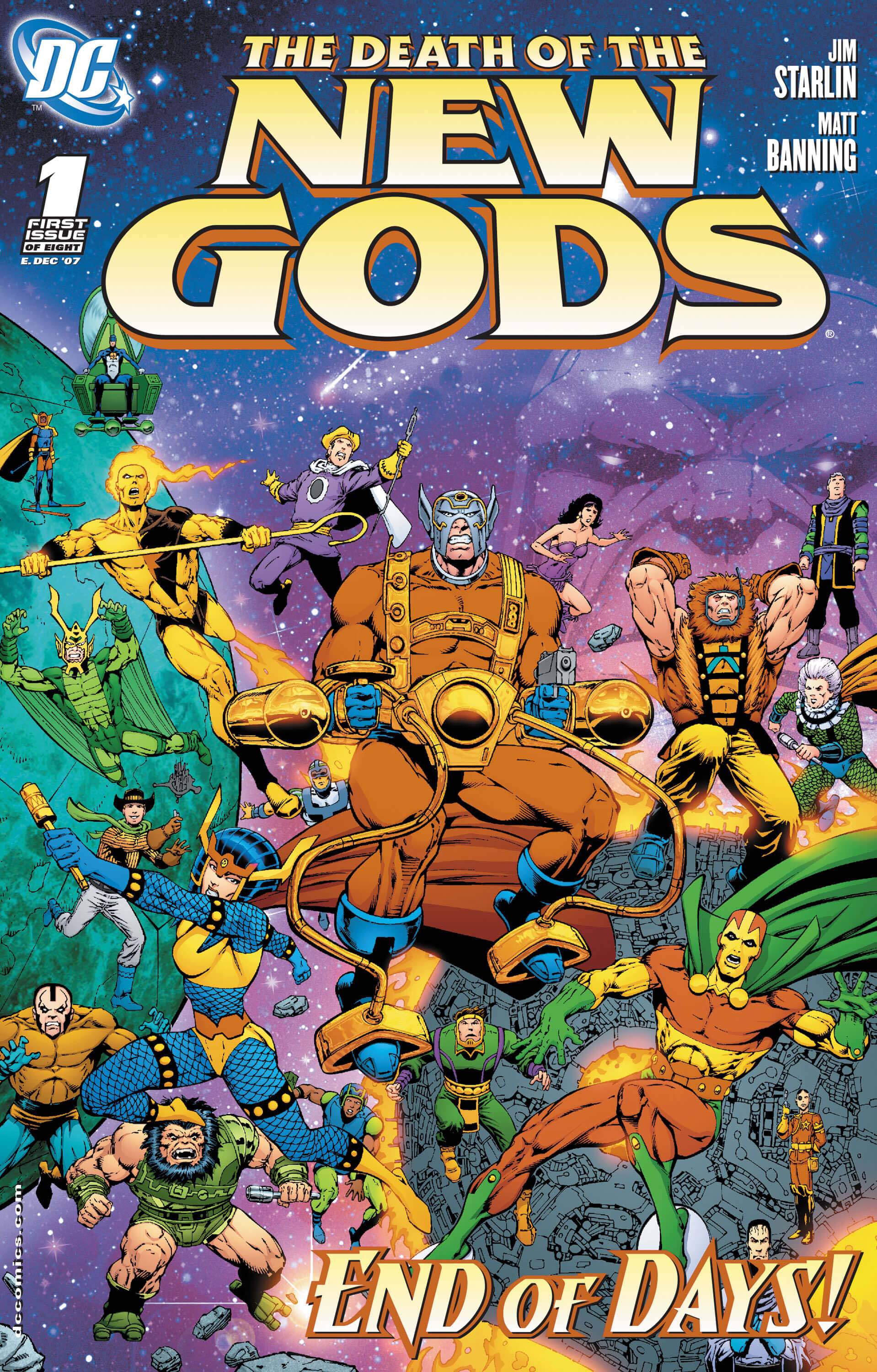 When an Anti-Life Entity merged with the Source, a new entity was created, which proceeded to kill the New Gods, including Orion (in 2007’s DEATH OF THE NEW GODS). When Darkseid was the only god left, the Source brought Orion back to end him. Orion succeeded, but his father’s spirit refused to die and found shelter in a human host.

Before Orion could stop Darkseid’s new plans, he was shot and killed by a radion bullet. His death marked the beginning of 2008’s FINAL CRISIS, in which Darkseid and the spirits of the other dark gods attempted to corrupt the entire Multiverse. Batman discovered that the radion bullet had been fired by Darkseid in the near future and had been sent backward in time to take Orion by surprise. Darkseid later explained that Orion’s death had such significance in the universe that the event echoed throughout space and time, which is why he had appeared to die and resurrect repeatedly before his final death by radion bullet.

At the end of FINAL CRISIS, Darkseid’s spirit was destroyed. The New Gods, except for Orion, were revived in the parallel universe of Earth-51. From there they watched as new versions of themselves and Darkseid appeared in other universes (MULTIVERSITY GUIDEBOOK, 2015).

In DC’s New 52 continuity, Orion was a more jocular and arrogant warrior. He spent some time aiding Wonder Woman in her dealings with the gods of Olympus (WONDER WOMAN vol. 4 #12, 2012). 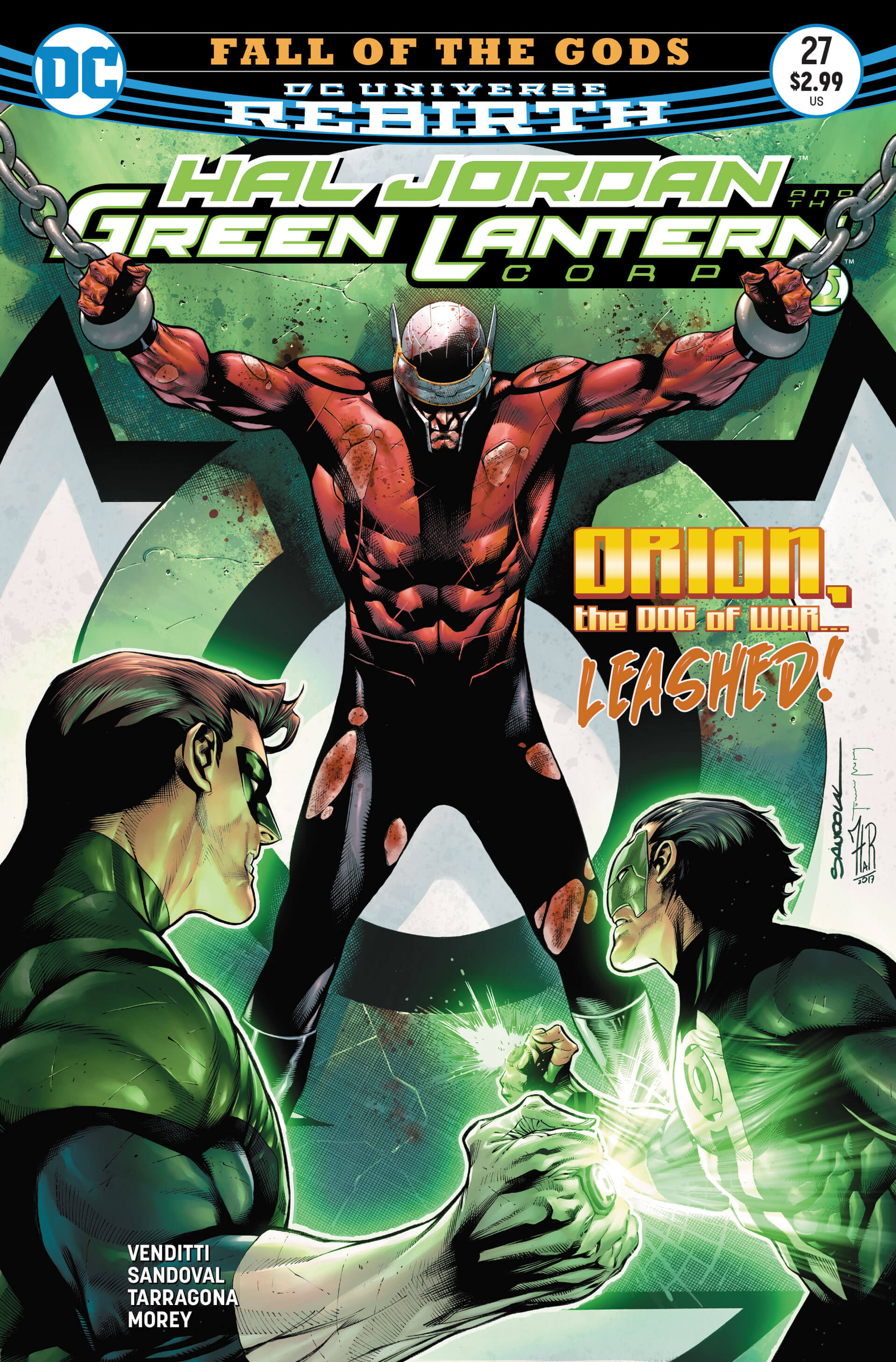 In 2016 DC’s Rebirth restored much of the universe’s pre-New 52 history. In Orion’s case, it is still unclear how much of his history has been altered.