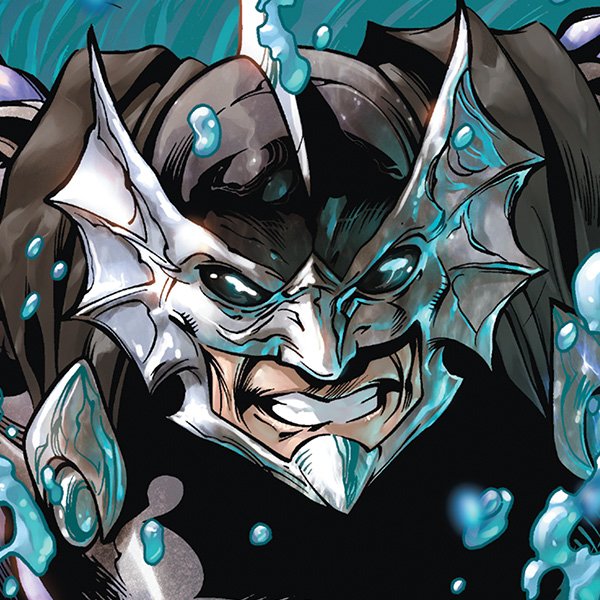 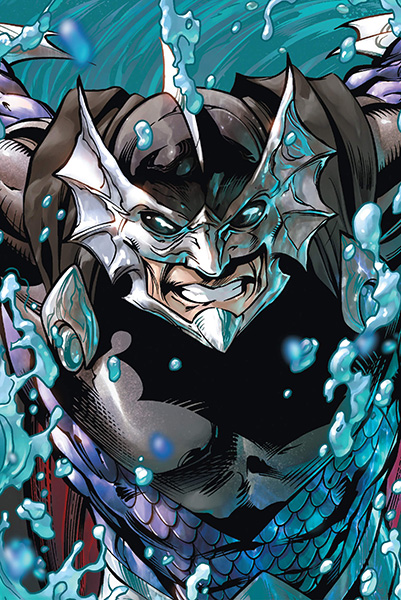 Ruthless and bloodthirsty, Orm Marius will crush anyone who stands in the way of his ascent to the Atlantean throne, even his own half-brother, Aquaman.

Ruthless and bloodthirsty, Orm Marius will crush anyone who stands in the way of his ascent to the Atlantean throne, even his own half-brother, Aquaman.

Cain and Abel. Zeus and Poseidon. King Richard and Prince John. Ever since the beginning of time, there have been tales of brothers vs. brother. And the underwater kingdom of Atlantis is no different, having given rise to the legendary rivalry between Arthur, King of Atlantis, and his half-brother, Orm Marius, who is better known as the Ocean Master.

Orm is eternally jealous of his brother, known on the surface world as Aquaman, and has dedicated his life to not only taking his throne away from him - and thereby taking it for himself - but also destroying everything and everyone that he holds dear. Although they are related by blood, Orm has none of his brother’s nobility or charity, and only exhibits ruthlessness and sadism.

Although the nature of their brotherhood has changed over the decades, it seems that the two half-brothers are always destined to be at odds no matter how the universe shakes out. Ocean Master will never rest until his older brother is destroyed, and the throne of Atlantis belongs to him.

Although Orm and Arthur have always been presented as half-brothers, the circumstances of their relation has changed over the years. In the Silver Age, Orm was born Orm Curry, the son of Aquaman’s human father Tom Curry and a human woman named Mary O’Sullivan. Having grown up in the shadow of his brother Arthur, he held deep resentment for his brother’s remarkable abilities. He turned to crime at an early age, and at one point, lost all his memory when he was stricken with amnesia.

Due perhaps to residual memories and resentments, Orm, now having given himself the surname of Marius, became a high-tech sea pirate. At first, he merely held sea faring vessels for ransom, but eventually moved on to causing natural disasters in the ocean. This brought him into conflict with his long lost brother Arthur, now known as the Super-Hero Aquaman. He eventually created a special helmet that allowed him to breathe underwater, and on several occasions, tried to steal the throne of Atlantis from his brother.

At one point, the heroic spirit who goes by the name Deadman possessed the body of Orm. He unlocked his memories that were stricken from his mind when he initially got amnesia, but access to his full memories only deepened his hatred for his half-brother, and furthered his desire to take his vast kingdom away from him. 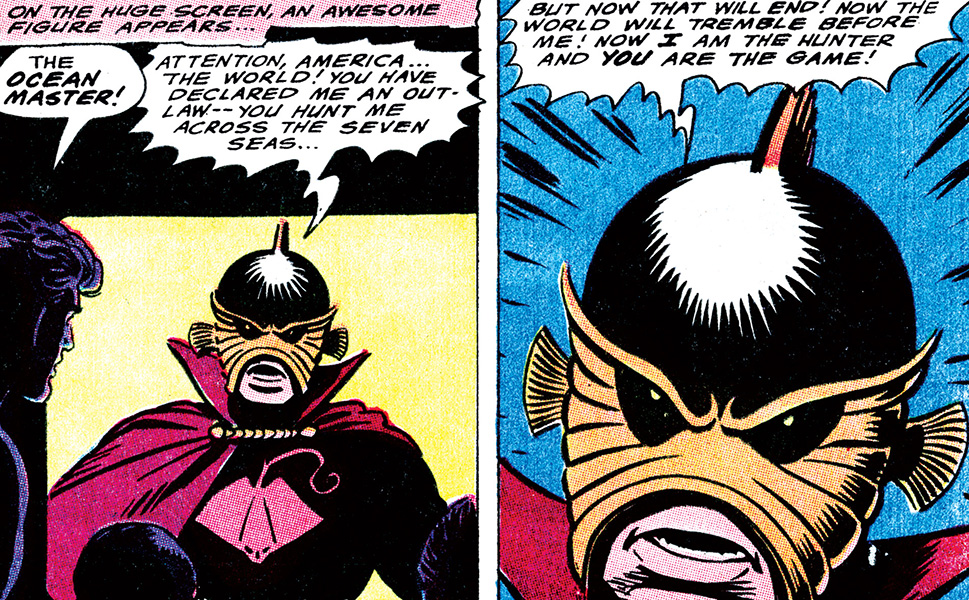 After the universe shattering events of the Crisis on Infinite Earths, Orm’s origins were altered along with his brother Aquaman’s. Although he was still Aquaman’s half-brother, the circumstances of that relation were different. In this new reality, neither Orm nor Arthur were the son of Tom Curry, but instead, they were the children of the ancient Atlantean wizard Atlan. (A lighthouse keep named Arthur Curry still raised a young Aquaman and passed his human name on to him). Atlan sired another child with an Inupiat woman, and that child grew up to be Orm.

When a young Aquaman rescued a young Inupiat girl named Kako from a polar bear, this began a romantic relationship between the two. Her cousin, it turns out, was a young Orm, who was instantly jealous of this interloper who had stolen Kako’s heart, and attacked her. Although she didn’t remember who it was who was behind the attack, this incident began the long rivalry between Orin (Aquaman’s Atlantean name) and his brother Orm, even though the two didn’t know of their sibling status at all just yet.

Years later, Orm resurfaced as the Ocean Master, now using magical abilities in an effort to steal the throne of Atlantis for himself. He once even sold his soul to the powerful demon Neron, in exchange for a powerful trident of his own. The catch was, Orm felt intense pain whenever he didn’t have the trident in his possession. With this new power however, Orm managed to conquer a place called the Dreaming City, which was home to an offshoot Atlantean race. It was during this time that Aquaman finally revealed to Orm their brotherly relation, but this realization caused Orm’s mind to snap, not being able to bear the reality that his most hated enemy was also his brother.

Afterwards, Ocean Master joined Lex Luthor’s Injustice Gang for a brief time, coming into conflict with his brother’s teammates, the Justice League. Orm fought the League once again, during a time when it appeared that Aquaman had died, and he tried to claim the kingdom of Atlantis for himself. He even once his magical skills to alter reality, so that Arthur was “Ocean Master,” and Orm was “Aquaman.” As the villainous Aquaman, Orm held the underwater city of Sub Diego under his thrall, but Arthur broke this spell, and reality reasserted itself to what it once was.

Reality in the DC Universe was altered once again, after the time shifting event known as the Flashpoint. In this new reality, the nature of Orm and Arthur’s relation is changed once again. In this new history, Orm was the son of Queen Atlanna, also Arthur’s mother (In previous histories, Orm and Aquaman shared a father instead). After Queen Atlanna has Arthur with a human male, once again Tom Curry, she gives up the child and allows him to raise her young son. Eventually, Atlanna is forced to marry a member of the Atlantean Guard, and Orm is the result of this union.

Twelve years later, Orm’s father dies, and soon, so does Atlanna, under mysterious circumstances. Young Orm is suspected as being behind his parent’s deaths, but with no proof, he ascends to the throne of Atlantis. Knowing that Orm is a corrupt ruler, the Atlantean advisor Vulko seeks out Arthur on the surface world, and tells him that he is the rightful ruler of Atlantis, and must take the throne from his brother. Aquaman allowed Orm to remain King of Atlantis as long as he did not invade the surface world. That was not a promise that was kept.

Due to manufactured circumstances, which made it seem like the humans was looking to destroy Atlantis, Orm invaded the surface world, causing massive amounts of destruction and loss of life. This cause him to finally fight his brother for throne of Atlantis, which his brother wins with the help of his paramour, Mera, and his friends in the Justice League. Orm – now known on the surface world as “Ocean Master” – is remanded to Belle Reve prison. His hatred and jealousy of his brother now ingrained in him for all time, he spends his days plotting how and when he will regain the throne that he sees as rightfully his. 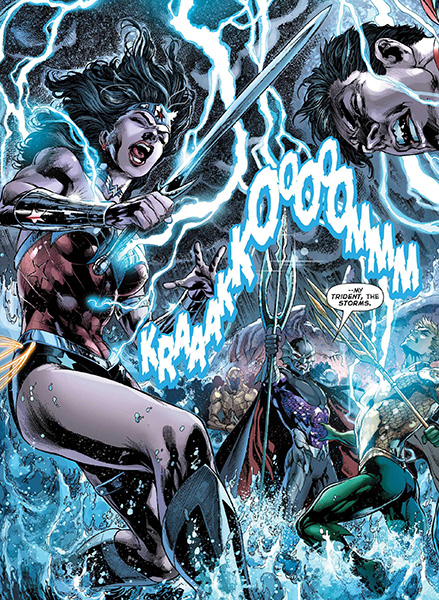 Ocean Master’s abilities vary depending on which reality he resides in. In his original incarnation, Orm was a surface dweller by nature, and had no metahuman abilities. He developed a helmet that allowed him to breathe underwater, and special body armor that protected him from the intense pressures of the ocean floor. He was able to arm his minions with similar armor.

Orm also studied magic, and became quite proficient at different schools of sorcery. Among those magical abilities are telepathy and energy projection. When he received his trident from the demon Neron, he was able to augment his magical abilities significantly. He was also proficient in harnessing the powers from ancient Atlantean talismans.

In the post-FLASHPOINT reality, Orm was now a full blooded Atlantean, and therefore had full Atlantean abilities like super human strength, durability, speed, and other enhanced senses. He is also a proficient warrior, and a superior fighter to almost any regular surface dweller who has similar training. The drawbacks of his Atlantean heritage are that Orm dehydrates much faster than a regular human, which end up weakening him while up on the surface world.

King Orm also had special weapons like his crown, which allowed him to control the oceans using a powerful form of hydrokinesis. His trident allowed for weather manipulation, which he used to cause tidal waves powerful enough to flood several coastal cities. 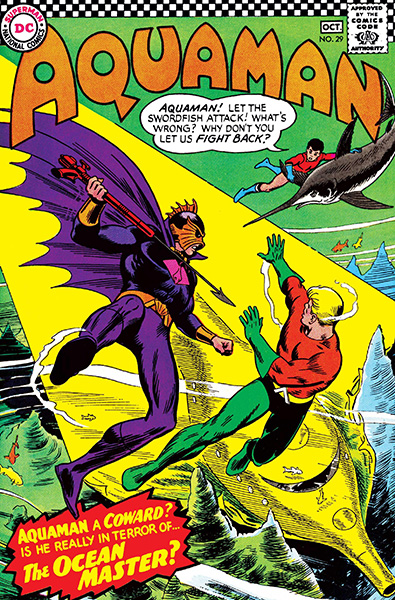 The Ocean Master’s first appearance occurred during the middle of the Silver Age of comics, and although it was a seemingly one-off story, it established the core of the rivalry between the two men that would end up being played out over the next several decades. Ocean Master appears as an underwater pirate, similar to Aquaman’s other arch enemy, Black Manta. He attacks both Aquaman and his young partner Aqualad.

As the story unfolds, Aquaman explains to his teenage partner the truth of their connection, that Orm is in fact his half-brother. He explains that Orm grew up jealous of his lack of special powers, and his bitterness caused him to become a criminal. Eventually he suffered from amnesia, but his hatred for Aquaman remains. He explains to Aqualad why this made it impossible to fully hate Ocean Master, for he and he alone knew they were siblings. 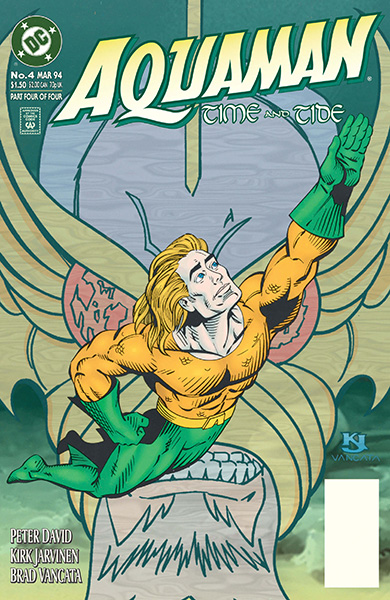 In the new history of the DC universe formed by the CRISIS ON INFINITE EARTHS, the nature of Orm and Arthur’s relationship was changed. In this story, which recounts an incident from Aquaman’s teenage years, he tells the story of how as a young man, he save an Inupiat girl named Kako from being killed by a polar bear, although he is injured himself. While she is nursing him back to health, we are introduced to her cousin Orm, who although unknown to him, is the half-brother of Arthur. Both men had the same father – the ancient wizard Atlan.

Young Orm is presented as a bully, one who is disliked by most of his family for abandoning the “old ways” of his people, instead embracing the way of life of the white man. When he finds that his cousin Kako is infatuated with a new stranger, he becomes insanely jealous of him, totally unaware of his blood relation to the young stranger. This rivalry would last for the rest of their lives, and even beyond.

In the once again changed history of the DC Universe, altered after the events of FLASHPOINT, Orm was now the King of Atlantis and a full-blooded Atlantean. When a United States Navy submarine accidentally strikes Atlantis with underwater missiles, 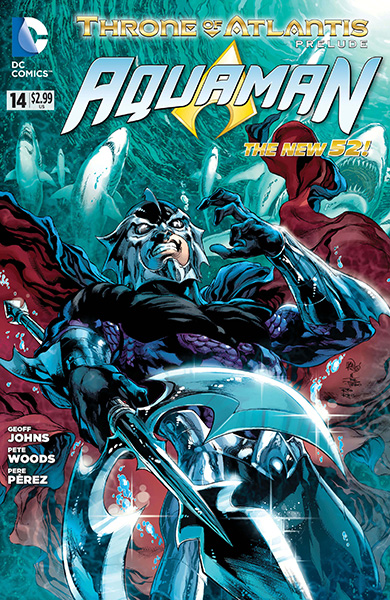 the undersea kingdom sees this as an act of war. King Orm sends tidal waves into coastal American cities like Gotham, Metropolis, and Boston, killing civilians and destroying billions in property.

Aquaman defends the surface world along with his Justice League teammates, and ultimately defeats Orm, taking the throne of Atlantis for himself, and stopping the war between the surface world and Atlantis. Orm is sent to Belle Reve prison, humiliated as his crown is taken from him, and vowing revenge on his brother. It is revealed that it was Aquaman’s assistant Vulko who caused the incident between the American sub and Atlantis, hoping the conflict would cause a conflict between the brothers, in which Aquaman would take the throne from his brother.