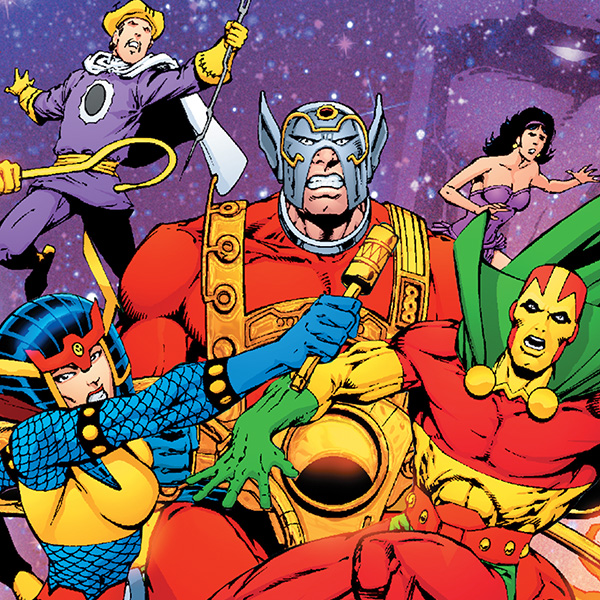 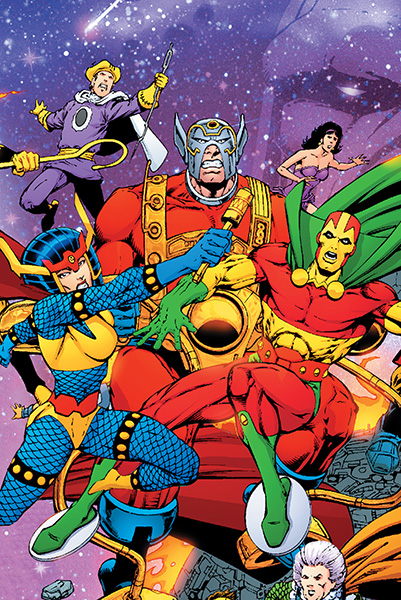 Though they look human, the aptly named New Gods represent the peak of evolutionary perfection, as they wield the Source in an eternal battle between good and evil.

Though they look human, the aptly named New Gods represent the peak of evolutionary perfection, as they wield the Source in an eternal battle between good and evil.

There came a day when the Old Gods died. Their destroyed world reformed into two planets of light and dark, New Genesis and Apokolips, each inhabited by New Gods who warred against each other to either protect or control all life and the Source, the energy behind all living things.

For many years, there existed a truce between Apokolips and New Genesis when its rulers Darkseid and Izaya the Highfather exchanged their infant sons. But Darkseid eventually set the truce aside to resume his quest for conquest and the Anti-Life Equation. Many times, the New Gods have brought their war to Earth, making allies and enemies of its super heroes. Theirs is a conflict that transcends time and space, and the ultimate victory will affect all life. 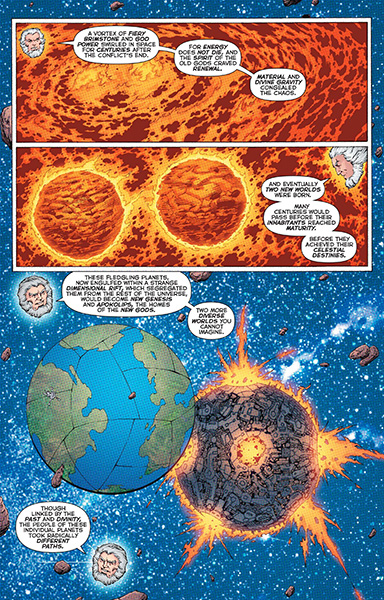 Billions of years ago, there existed a place that would one day be called Godworld or Urgrund or Galacia (GREEN LANTERNS #28, 2017). According to some accounts, this world was the original Asgard of legend. Its primitive age would later be known by the phrase “First World.” God-like figures rose on it, their presence changing the nature of reality around them, ushering in the age called the Second World. These beings, later known as the Old Gods, went to war with great weapons of cosmic scale. In the end, there were no victors. They simply destroyed themselves and the Godworld (NEW GODS #1, 1971).

The shockwave of this destruction rippled throughout the universe, leaving energy seeds that would eventually form into beings and pantheons worshipped by different planets. The energy release also shifted the remnants of the Godworld into another dimensional plane, cutting it off from the rest of the universe. The remnants formed into two new planets orbiting the same star: New Genesis (full of life) and Apokolips (a place of barren terrain and fire pits). New Genesis became home to the Insect Empire, while a race of humans called Lowlies or Hunger Dogs evolved on Apokolips. On both planets, there rose immortal beings with strong connections to the Source, the energy field behind all life. Descendants of the Old Gods, they were known simply as the New Gods. The different natures of New Genesis and Apokolips drove the two planets to war.

The New Gods referred to the outside universe and its pantheons (which included the Olympians and others) as the Third World, while their dimension was the Fourth World.

Existing in a dimension slightly removed from Earth’s plane, the New Gods are immortals who are not touched by age or disease. Their godly energies, attributed to a strong connection to the Source, give them all superhuman strength, stamina, speed, intelligence and resistance to injury. The power of these abilities varies, and some New Gods have unique powers. For instance, Lightray can fly under his own power while Orion can’t but has strength rivaling that of Superman.

New Gods are giants in proportion to Earth humans. But traveling to Earth and the outside universe through boom tubes allows for their size to adjust to human standards.

All New Gods can be killed by sufficient physical or energy force. Like Scott Free, they can give up their “godhood,” in which case they become as strong and vulnerable as human beings. New Gods are also vulnerable to the “theotoxic” element called radion.

According to the Green Lanterns, New Gods are not like most biological life forms and their bodies are mostly comprised of energy. Along these lines, Batman once hypothesized that the reason the New Gods are so powerful and difficult to kill is because their dimension is a place of Platonic ideals, and each New God is, to some degree, the living embodiment of an idea (Orion is war, Scott Free is freedom, Darkseid is tyranny, etc.). 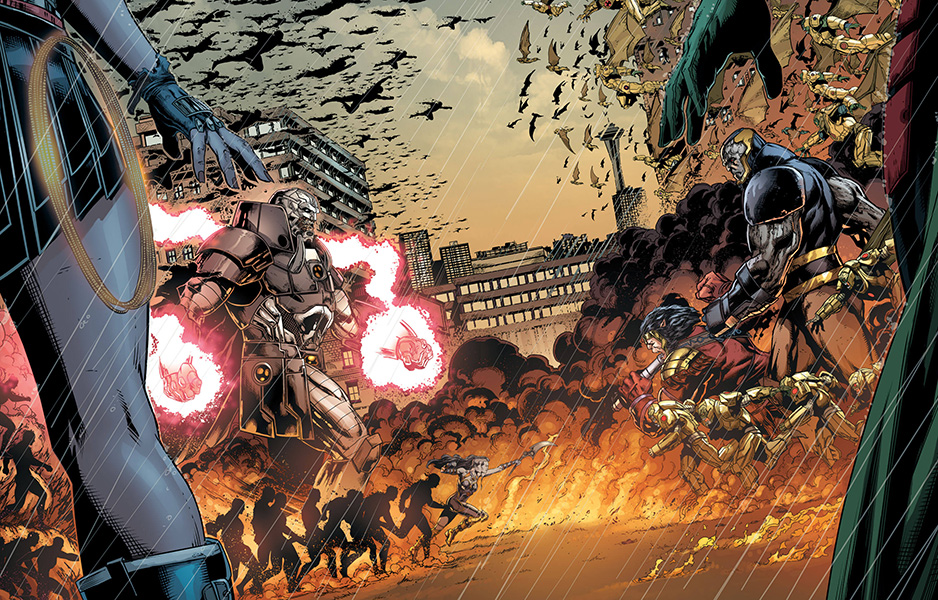 The Rise of Highfather and Darkseid 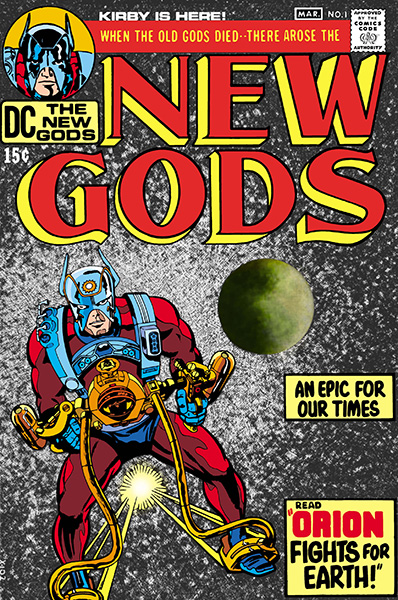 On Apokolips, the warrior Uxas was born to the rulers Yuga Khan and Heggra. Yuga Khan was lost to the Source Wall, the barrier between reality and the Source. Heggra took over as ruler, but Uxas wanted to supplant her and his older brother Drax.

When Drax attempted to attain great power by connecting with the energy known as the Omega Force, Uxas interrupted the process, taking the power for himself and seemingly killing his brother. Uxas was transformed into a stone-like being of incredible power and remained himself Darkseid the Destroyer. One of Darkseid’s earliest acts was to convince his uncle, the warrior Steppenwolf, to hunt the people of New Genesis for sport. This led to the death of Avia by Darkseid’s hands. Her husband Izaya declared Darkseid an eternal enemy (NEW GODS #7, 1972).

Repeated attempts at revenge brought now peace to Izaya. Eventually, he communed directly with the Source and came to embrace pacifism and compassion. He became the peaceful leader of New Genesis, assuming the title of Highfather. At times, he was guided by the Source itself through fiery words written out by the image of a hand (NEW GODS #1, 1971).

Hovering on the edge of the New Gods’ war was Metron. Though he seemed to be a New God himself, one dedicated to knowledge and scientific research, he did not seem to be native to either New Genesis or Apokolips. Metron claimed that his creation was unforeseen, that he existed before the New Gods and would still exist after they were gone. On one occasion, he gave Darkseid access to boom tubes, star gates that could transport people not only between the two planets of the Fourth World, but also to the outside universe. In exchange for this, Metron was given the X-element, a versatile element that could power his transdimensional Mobius Chair.

Himon, the creator of X-element, also used it to create Mother Boxes, living personal computers tied to the Source.

Darkseid fathered children and eventually arranged for his mother to be poisoned after discovering how she had conspired against him in the past. Now ruler of Apokolips, he determined to not only conquer New Genesis but all of reality, seeing it as a chaotic realm that needed his control. He gathered powerful allies to his side, referring to them as his Elite. He also set up mass scale production of Parademons, soulless monster troops engineered from Lowlies and other people Darkseid sacrificed without hesitation.

Seeking to end the conflict between their worlds, Izaya offered a truce to Darkseid and eventually an agreement was made. Izaya exchanged his infant son Scott with Darkseid’s son Orion by his wife Tigra, each boy acting as a hostage. The war was over for the time being. While Orion was raised by Highfather’s compassionate guidance, Scott suffered through the training and death traps of Granny Goodness’s “orphanage” on Apokolips.

As the “dog of war” of New Genesis, Orion fought for the cause of life, armed not only with his great strength but his access to the energy known as the Astro-Force. On at least one occasion, he and Lightray visited Earth during the early years of homo sapiens. Metron also visited Earth and gave the secret of fire to an early human named Anthro (FINAL CRISIS #1, 2008).

When Darkseid’s Elite visited the planet Mars, they learned of their mathematical philosophy known as “Life Equations.” Inspired by this, it occurred to Darkseid that there must be an Anti-Life Equation that would give someone mastery over the minds and bodies of others (MARTIAN MANHUNTER #33-35, 2001). He came to believe that some human beings on Earth had at least part of Anti-Life Equation buried in their minds, but his truce with Highfather prevented him from openly attacking the planet and investigating his hypothesis.

The War comes to Earth 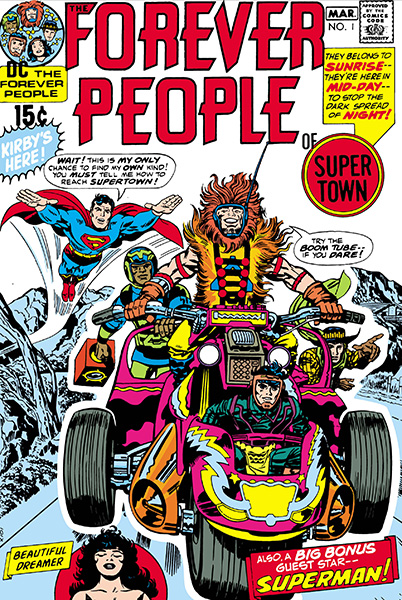 Eventually, Scott (nicknamed Scott Free for his expertise at escaping traps, shackles and cages) escaped Apokolips. Darkseid used this as an excuse to say the truce as now broken, and so began moving his operations directly to Earth. To help his agenda, Darkseid armed the criminal cabal known as Intergang with advanced weaponry from Apokolips.

Scott Free gave up his godhood and came to Earth, becoming a normal human being for all intents and purposes. He assumed the identity of escape artist and stunt performer Mr. Miracle. With help from his love and later wife Barda, herself a former warrior of Apokolips, he fought Darkseid’s schemes even though he largely wanted no part of the Fourth World war (MISTER MIRACLE #1, 1971).

Orion went to Earth to stop Darkseid, as did a group of young New Gods (the equivalent of teenagers) who called themselves the Forever People. The Forever People were able to use their Mother Box to summon Darkseid’s brother Drax, who now lived as the super-powered champion called Infinity-Man (FOREVER PEOPLE #1, 1971).

The conflicts of the New Gods wound up attracting the attention of various people on Earth. At times, Darkseid’s forces attacked Earth in subtle ways, such as during the 1986-1987 event LEGENDS, when Glorious Godfrey of Apokolips began a smear campaign against all super heroes. 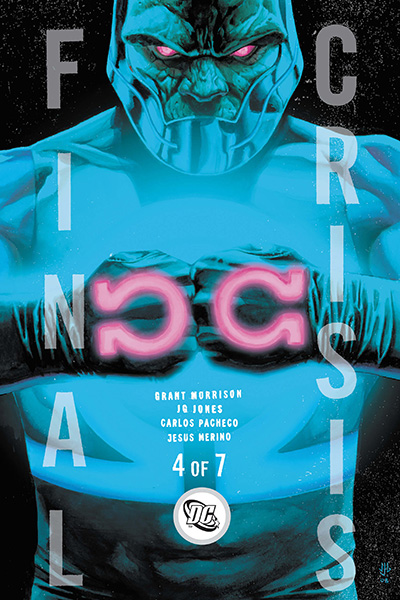 The Source decided it was time for the Fourth World to end and a new Fifth World to emerge. It sent out an agent to kill the New Gods one by one. When Darkseid proved resistant and learned the Anti-Life Equation, the Source resurrected his son Orion to finally destroy him. He did so, only to then die again from a radion bullet to the head.

Darkseid’s spirit refused to die and he found safety inside a human host. Assuming the identity of Boss Dark Side, he used the Omega Force to summon the spirits of his Elite and place them in human hosts. Now armed with the Anti-Life Equation, he passed it on to children and attempted to kidnap young metahumans for his new army.

Darkseid’s refusal to die caused a corruption in the universe. This, plus his new plan to unleash the Anti-Life Equation on Earth’s population, led to 2008-2009's FINAL CRISIS event. When his human host burned out, Darkseid transferred his mind into Metropolis police detective Dan Turpin.

It was discovered that Darkseid himself had killed Orion, firing a radion bullet backwards in time so it couldn’t be foreseen or stopped. Batman used this same bullet on Darkseid to weaken his human body. Superman eventually destroyed the dark god’s energy essence, forcing him to experience his death at last.

In the wake of this, the New Gods (except for Orion, it seemed) rose again in the parallel universe of Earth-51. 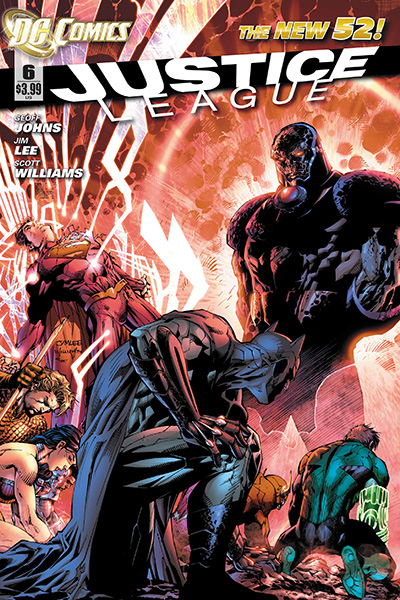 In 2011, much of DC's history was reimagined in the New 52 universe. In this version of history, Darkseid and Izaya co-existed with the Old Gods and were the ones to destroy them by raising an army against them. In modern times, Darkseid led an attack on Earth-2, then years later against the people of Earth-1. In that universe, his invasion inadvertently caused the formation of the Justice League.

Highfather became obsessed with finding the Life Equation to combat Darkseid. This quest led to a conflict between the New Gods and the various Lantern groups that harness the power of the emotional spectrum through power rings.

In the 2015 event Darkseid War, Darkseid and the villain called Anti-Monitor battled. The result was that Darkseid died, then was reborn only to then be transformed into an infant.

It was revealed that these versions of the New Gods were echoes of the true New Gods who still lived in the universe of Earth-51, watching their counterparts from afar.

Following 2016's DC UNIVERSE: REBIRTH #1, much of DC’s pre-New 52 history has been restored. What this means for the New Gods is as yet unclear, but their original origin story and early adventures appear to be canon once more.