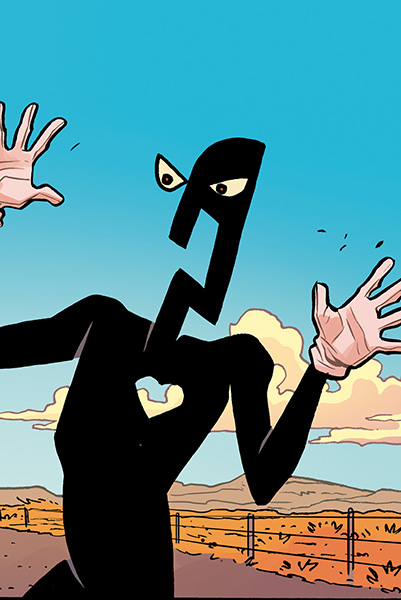 The leader of the Brotherhood of Dada and an archenemy of the Doom Patrol, Mr. Nobody seeks to envelop the world in madness.

The leader of the Brotherhood of Dada and an archenemy of the Doom Patrol, Mr. Nobody seeks to envelop the world in madness.

The mysterious Mr. Nobody began as Eric Morden, a man who fancied himself a criminal mastermind. In the early years of the Doom Patrol, he stole one of the Chief's lunar exploration droids in an effort to impress the Brotherhood of Evil in the hopes they would allow him to join. But Morden and the Brotherhood had a falling out, and he fled to Paraguay and hid from the team for years. There, Morden contacted a Nazi scientist who exposed him to something called the White Room, which drove him completely insane and converted his body into a living virtuality which could drain the sanity from others. Now looking like a living shadow, he changed his name to Mr. Nobody.

Soon, he formed his own team, the Brotherhood of Dada, who shared Morden's insane belief that the world was "a drooling idiot with no fashion sense," and that it needed to be radically changed into something far more interesting. He fought the Doom Patrol when he attempted to steal a magical painting and feed the city of Paris into its alternate dimension. Eventually defeated, he wound up banished for several years, but eventually returned to plague the Doom Patrol when they were operating out of Oolong Island. Before the events of 2011's history-altering FLASHPOINT, he snuck into the comatose body of the team's leader, The Chief.