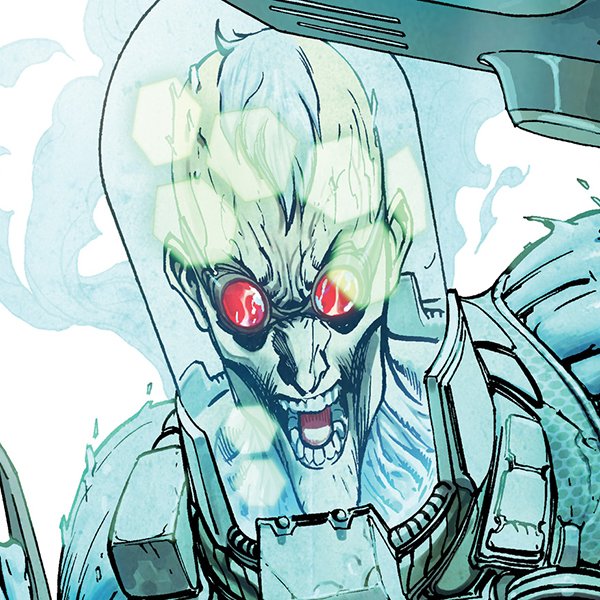 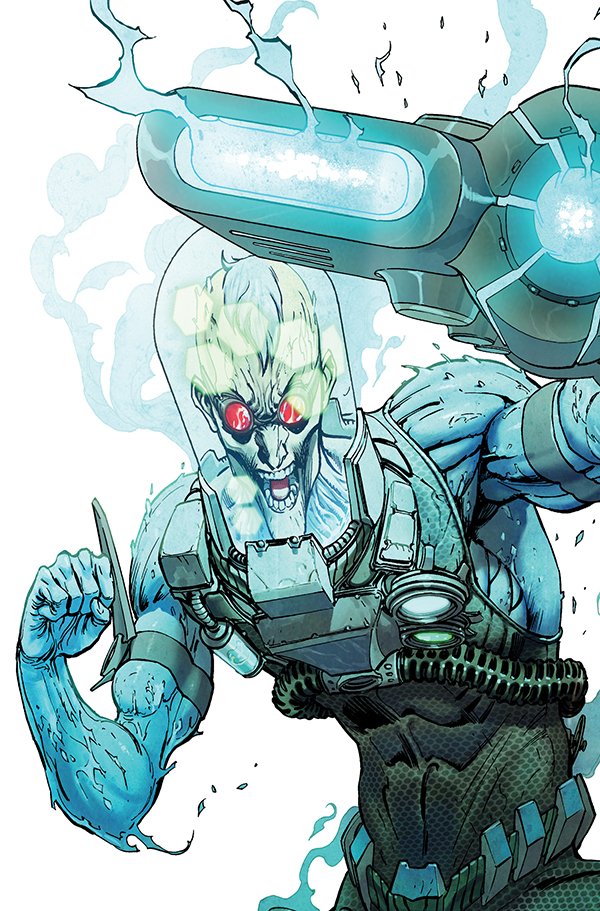 The most coldhearted of all the Batman's foes, Victor Fries pursued a life of crime in order to save the life of his wife Nora.

The most coldhearted of all the Batman's foes, Victor Fries pursued a life of crime in order to save the life of his wife Nora.

Batman’s friends sometimes accuse him of shutting off his emotions as he wages his war on criminals. But the Dark Knight’s stoicism pales when compared to that of one of his deadliest enemies—Mr. Freeze.

When this scientific genius was bathed in cryogenic chemicals, he was forced to wear a subzero-temperature cryo-suit in order to survive. But his curse became Gotham’s when he used his technology to lead a life of crime. At first, his motives were as pure and uncomplicated as the ice he weaponized in his countless crimes, through the use of his trusty freeze guns.

But although he began his criminal career in pursuit of wealth, Freeze acquired a more tragic motivation in the form of his wife, Nora, whom he long kept in frozen stasis, in the hope of one day curing her life-threatening illness. 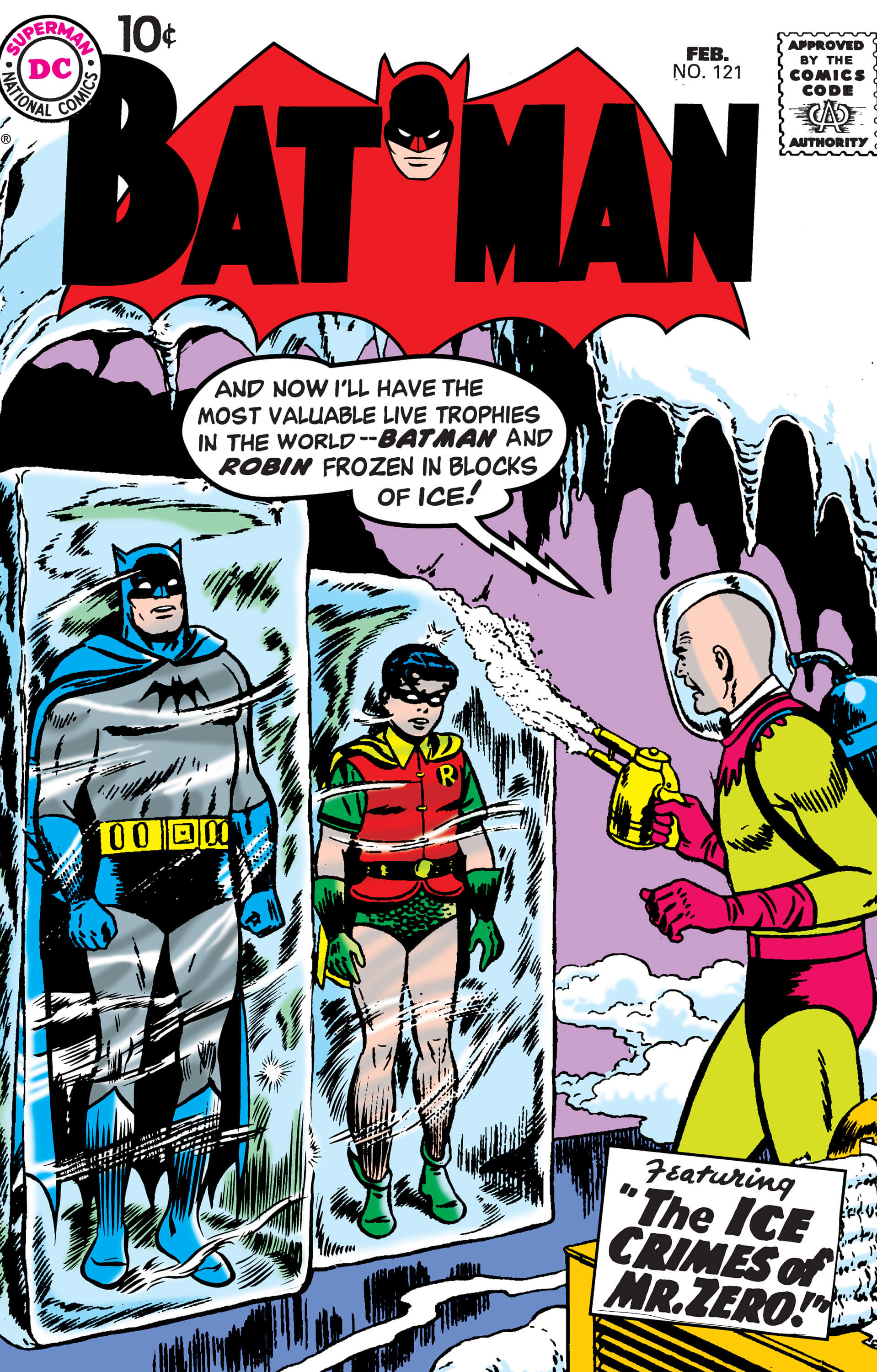 In his first appearance, Mr. Freeze operated under the name “Mr. Zero,” a bald criminal scientist who invented an “ice gun” that froze its victims. After accidentally saturating himself with a freezing solution, he learned that in order to live he must maintain his body temperature below zero degrees Fahrenheit. So he created a special suit, topped with a glass helmet, and established a refrigerated, secret lair in a mountain near Gotham City.

Mr. Zero used his signature weapon to commit a string of robberies, catching the attention of Batman and Robin. In their first encounter, the Dynamic Duo were imprisoned by their foe in a pair of enormous ice cubes. But they escaped with the aid of a loose steam pipe that melted their icy enclosures. The resulting steam bath cured Zero of his affliction. In time, however, the villain’s unique condition returned and he renamed himself Mr. Freeze.

After the dimension-collapsing events of CRISIS ON INFINITE EARTHS, Freeze’s origin was revised and expanded. Now named Victor Fries, the good doctor was shown to have had a troubled childhood. As a boy, he demonstrated a keen interest in cryogenics, freezing small animals in an effort to preserve them. Unfortunately, this disgusted his parents, who sent Victor away to boarding school. In school, Victor met the love of his life, Nora, whom he later married. But their union was sadly short-lived. Nora grew terminally ill, and Victor took a job working for Ferris Boyle at GothCorp to develop technology to place her in cryogenic stasis. When Boyle learned of Victor’s secret project, and the amount of money it was costing him, he pulled the plug on it and knocked Victor into his cryogenic chemicals. Left for dead, Victor discovered the chemicals had mutated his body, requiring it to remain chilled in a cryo-suit.

To complement his new look, Victor—now dubbed Mr. Freeze—created a freeze gun and sought revenge against Boyle, while also hoping to find a way to cure Nora. 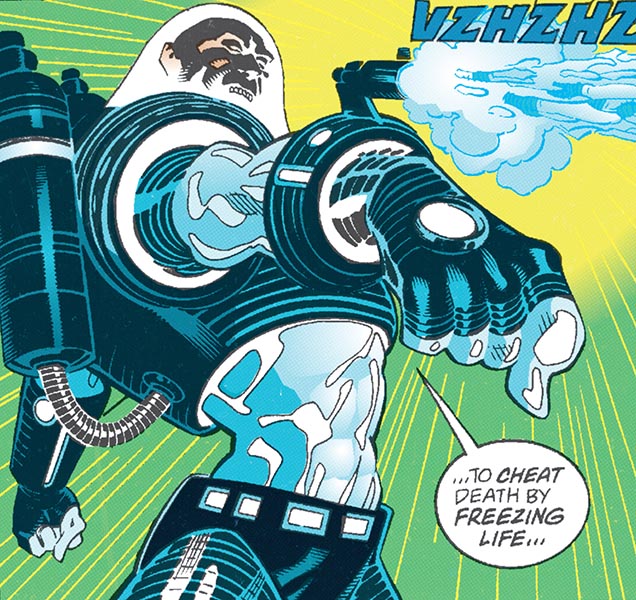 Mr. Freeze’s principal weapons are his deadly quick-freeze guns, which can trap his victims in a mass of ice.

In addition to maintaining his body at a constant low temperature, Freeze’s refrigerated outfit has evolved over the years into a nearly indestructible exo-suit of armor, giving him enhanced strength and endurance.

For a brief time, Freeze had cryokinesis, the ability to control ice—the result of a deal he struck when he offered the demon Neron his soul in UNDERWORLD UNLEASHED #1 (1995).

Yet Freeze’s deadliest weapon has always been his mind. A scientific genius, his mastery of cryogenic technology is unparalleled. Many have thought him to be without emotions, as cold as the suit he wears, but the driving force behind Freeze’s crimes is his burning passion for his wife, Nora. 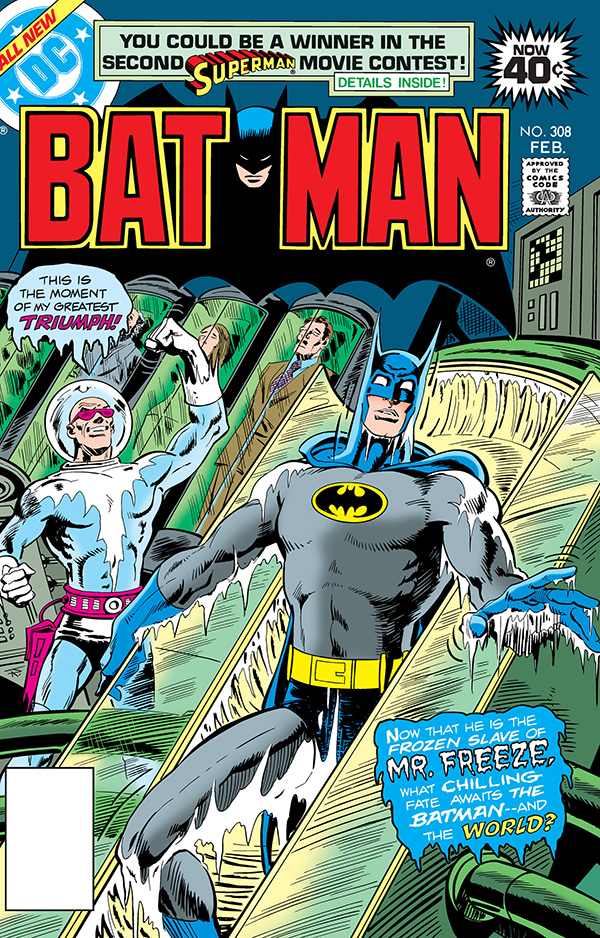 Mr. Freeze first appeared as Mr. Zero in BATMAN #121. Clad in a whimsical skin-tight yellow costume with a fishbowl helmet, magenta boots, gloves and a jester collar, he wasn’t as immediately popular as Batman villains like The Joker and the Penguin.

Since he was cured of his affliction at the end of his first appearance, he retired from committing ice crimes, and wouldn’t face Batman again until DETECTIVE COMICS #373 (1968). He wore a green suit with white boots and gloves for that caper, then disappeared again until BATMAN #291 (1977), later appearing in a more thematically appropriate blue-and-white ensemble in BATMAN #308 (1979). In this costume, he returned to Gotham City numerous times to menace the Dark Knight and his allies. He upgraded his apparel into a full suit of armor in the 1980s, and a fearsome super-powered exoskeleton in the 1990s. By this time, his skin had acquired an icy blue hue.

Mr. Freeze’s longstanding hope that he might one day reclaim his life with his beloved wife was briefly renewed by Nyssa Raatko, the daughter of Batman’s archenemy Ra’s al Ghul and the sister of Talia al Ghul. Nyssa, then the leader of Ra’s’ League of Assassins, offered to save Nora with the use of a Lazarus Pit, in exchange for Freeze’s help in fashioning a weapon for “The Society” (a.k.a. the Secret Society of Super-Villains) to use against her enemy Batgirl. Freeze agreed to the deal, and Nora was placed in the Pit. She was returned to life, but—as it so often does—the Pit took the sanity of the person using it.

The once-gentle Nora was reborn as a fire-conjuring demon with the same powers over life and death as the Pit itself. Calling herself “Lazara,” she told her husband he was responsible for her tragic fate and tried to kill Freeze. He struck back with his freeze gun, but Nora escaped. 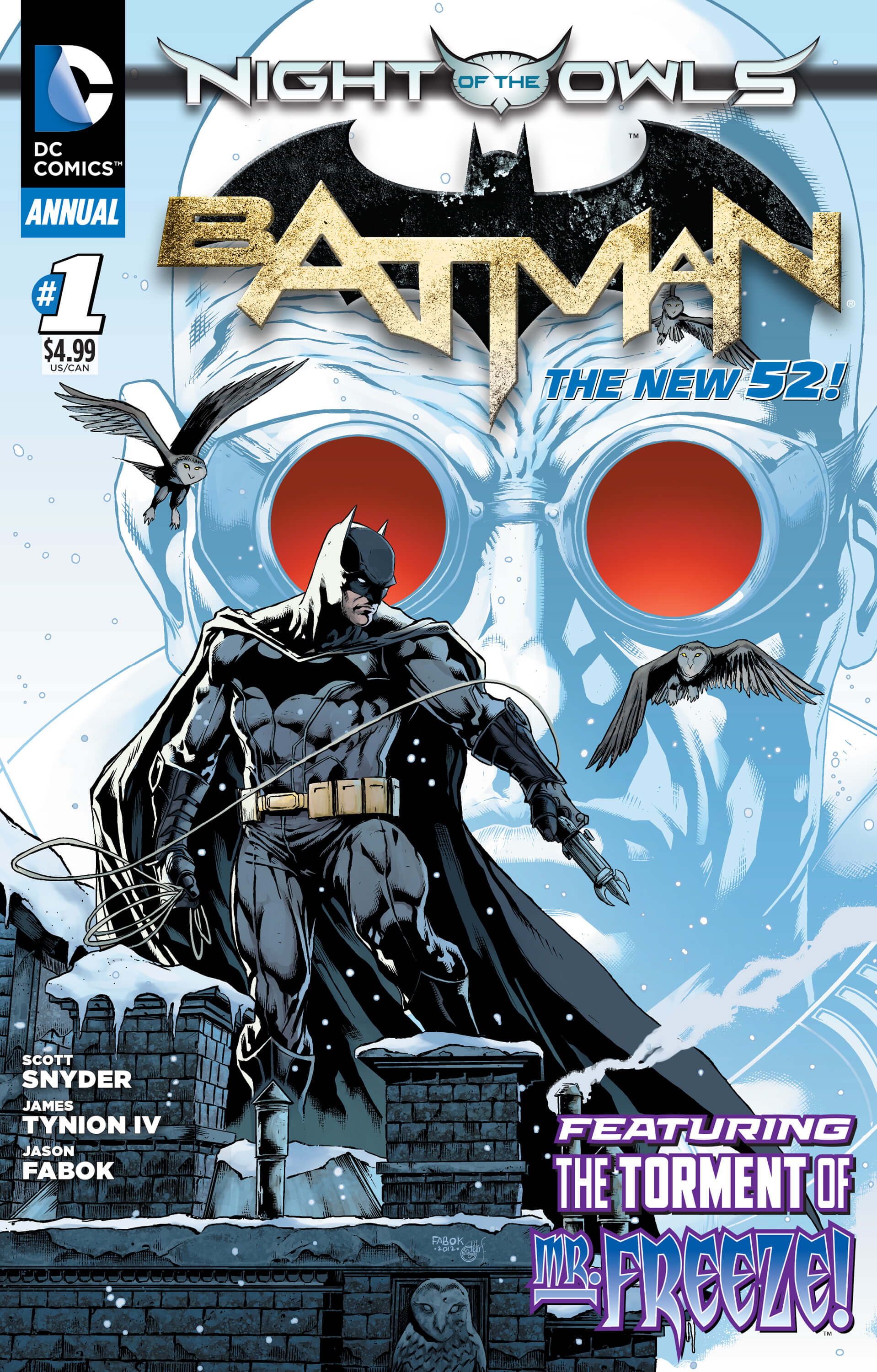 Mr. Freeze’s backstory was again altered in the New 52 universe. This Victor Fries was abandoned as a child by his father, and left to care for his sick mother. To cure her of her suffering, Victor pushed her wheelchair into a hole in the ice atop a frozen lake.

Instead of GothCorp, Victor went to work for Wayne Tower Laboratories and began a project reanimating the frozen dead. When Bruce Wayne returned to Gotham, following the years he spent traveling in preparation for his war on crime, the young billionaire ended the project. Victor, meanwhile, had developed an unhealthy fixation on one of the deceased—Nora Fields. The subject of Fries’ doctoral thesis, this Nora had died in her twenties (in the 1960s) and was the first woman ever to be put into cryogenic suspension. Calling her his “wife,” Fries tried to retain control of her body after Wayne terminated his work. In a scuffle with Wayne, Fries caused a laboratory accident that again ended with him in a subzero suit.

The New 52 Mr. Freeze is also responsible for creating the technology that the villainous Court of Owls used to activate their dormant assassins, the Talons.

Mr. Freeze’s pre-New 52 history was restored when he first battled the Dark Knight in the Rebirth universe, in ALL-STAR BATMAN #6 (2017). An alternate version of Freeze has appeared in DARK NIGHTS: METAL (2017). This Freeze doesn’t require an exo-suit—preferring instead to go bare-chested—and has the power to create giant ice creatures to do his bidding.