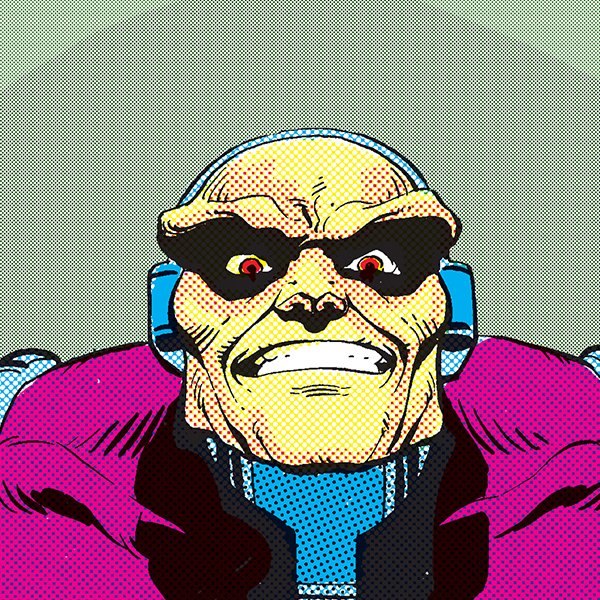 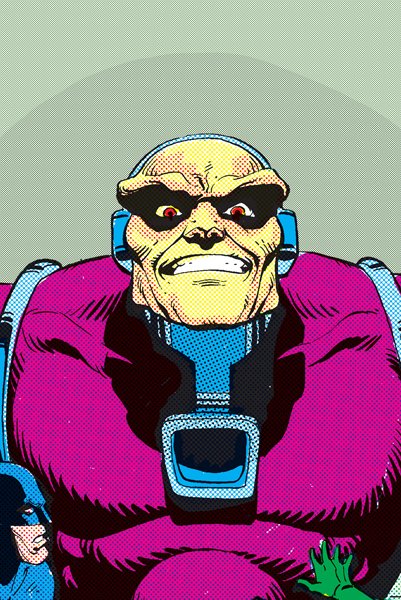 This extraterrestrial tyrant controls his empire through two means: the mass entertainment of combat death sports, and the ever-present threat of the planetary superweapon called Warworld.

This extraterrestrial tyrant controls his empire through two means: the mass entertainment of combat death sports, and the ever-present threat of the planetary superweapon called Warworld.

Over the years, the alien king Mongul has always been a power-hungry tyrant. The only variations are whether he is currently enjoying that power, or seeking it. With strength and endurance to rival Superman, Mongul has always been a commanding force. But the key to his conquest has always been Warworld, an enormous, ancient battle station the size of a planet. When Mongul first found Martian Manhunter guarding the key to Warworld, Mongul forced Superman to battle his ally by taking Lois Lane and Jimmy Olsen hostage. In the ensuing battle, Mongul took the key, and control of Warworld for the first time, but was defeated by Superman with the assistance of his cousin, Supergirl.

Mongul’s next campaign was on the planet Kranaltine, where he usurped the throne of the planet’s Prince Gavyn, known on Earth as one of the many heroes to call themselves Starman. He attempted to use a superweapon on Starman’s Throneworld to expand his conquest. Superman returned once more to free Starman from his grasp and beat Mongul back a second time. A third attempt at conquest was made when Mongul took control of a deadly Sun-Eater, but he was defeated this time by Superman, Supergirl, the Justice League of America, and the Legion of Super-Heroes.

At this point, Mongul’s vendetta against Superman was personal. If he was to make any further progress in his quest for conquest, the Man of Steel had to be dealt with for good. On Superman’s birthday, Mongul broke into the Fortress of Solitude to trap him in the grasp of the Black Mercy — a deadly plant which sapped the life from its victims by trapping them in a fantasy of their greatest desires. With the help of Batman, Robin, and Wonder Woman, Superman broke free of an imagined life on an idyllic Krypton to place Mongul in his own poison trap.

After 1985-86’s CRISIS ON INFINITE EARTHS, Mongul returned once more as the master of Warworld and a new empire all his own, which thrived under the placation of regular gladiatorial death matches. But that golden age for the Mongul Empire ended when his greatest warrior, Draaga, usurped Mongul’s throne and banished him from the empire. Robbed of his power, Mongul struck up an alliance with Hank Henshaw, the Cyborg Superman, to convert Earth into a new Warworld — starting with the destruction of Coast City, home of Hal Jordan. Though Coast City was lost, Superman, resurrected after his battle with Doomsday, fought Mongul and Cyborg Superman back with the aid of the cloned Superboy and the industrious Steel.

After this final failure, Mongul was approached by the demon Neron for another alliance in exchange for his soul. Offended by the offer, Mongul attacked the demon, and subsequently perished under the thumb of Neron’s otherworldly power.

Mongul was succeeded by his son, Mongul II, who had a more complicated relationship with Superman. Together, they stood against the threat of Imperiex in a war for the fate of the universe. Later, Mongul II was recruited as a power ring wielding member of the Sinestro Corps, where he led a failed coup for its leadership.

After the events of 2011’s FLASHPOINT, the histories of the two Monguls were consolidated into one. Since then, Mongul has been with Warworld and without, led a campaign for control of the Phantom Zone, and allied with some of Superman’s greatest enemies to destroy him and his family. Recently, Mongul has learned about the foundation of the United Planets, a universe-spanning government of alliance and cooperation. And Mongul is displeased.