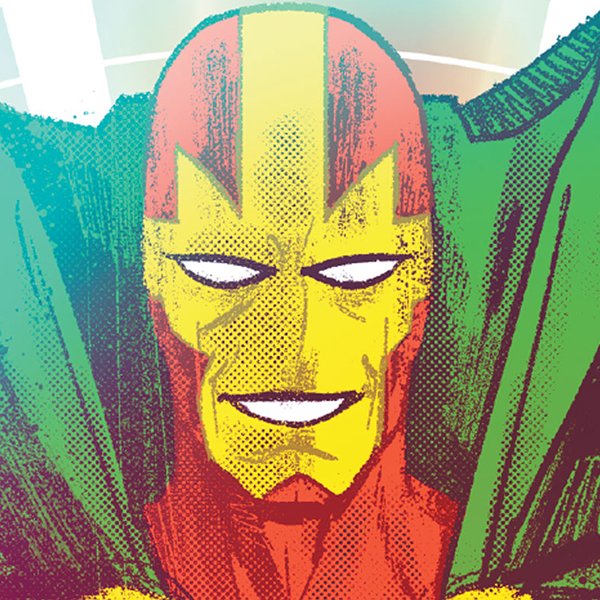 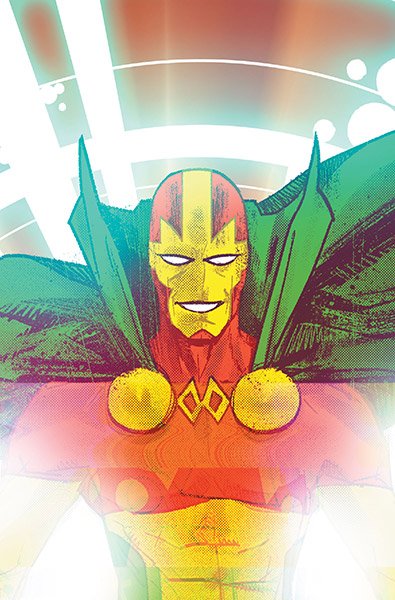 The world's greatest escape artist and a son of New Genesis, Scott Free longs for a world of peace with his wife and partner Big Barda. 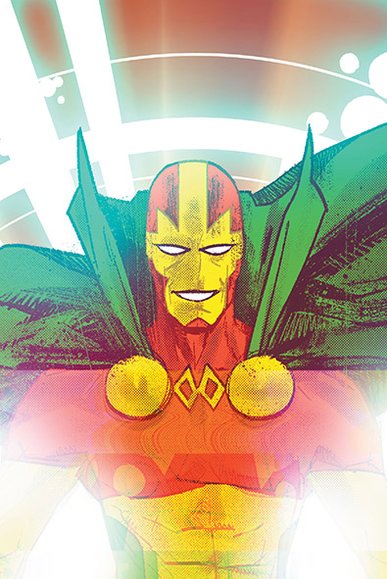 The world's greatest escape artist and a son of New Genesis, Scott Free longs for a world of peace with his wife and partner Big Barda.

That’s how Scott Free, a child of New Genesis, came to be raised in the torture pits of Apokolips by monsters like Granny Goodness. Growing up, Scott was forced to endure endless suffering at the hands of his captors, believing that they were his family. It wasn’t until he met an underground network of rebels, including his future wife, the Female Fury named Big Barda, that Scott was inspired to escape his prison and flee to Earth—a choice that wound up breaking the peace treaty and reigniting the war between worlds.

A perpetual victim of circumstances beyond his control, Scott is often looking for ways to escape the hands being dealt him, no matter the cost. After years enduring torture as a trophy for the enemies of his father, he has little time or care for things like destiny and duty, and instead wishes only to live the rest of his life with his wife in peace and quiet, away from the fire pits of Apokolips or the gardens of New Genesis.

Unfortunately, as so often happens with DC Super Heroes, fate has conspired to pull Scott back into the heart of battle, whether he likes it or not. 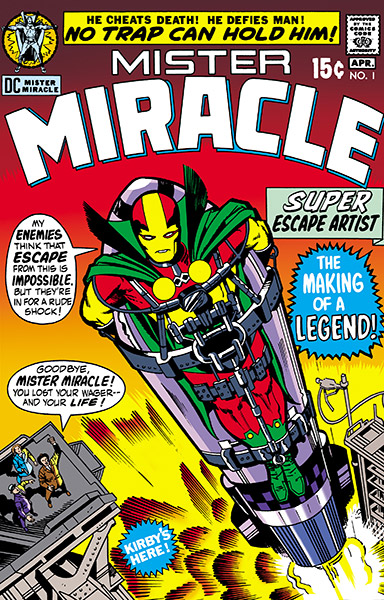 By all rights, Scott Free should have been given the chance to live his life in the luxury of New Genesis’ high society, but fate intervened. As part of peace negotiations in the endless war between New Genesis and Apokolips, Highfather and Darkseid offered their children up as collateral. Scott was condemned to a childhood raised in the fire pits of Apokolips, while Orion, son of Darkseid, was raised in the floating paradise of New Genesis.

Scott spent his childhood subjected to endless atrocities at the hands of the terrifying and cruel Granny Goodness, but his time in Apokolips was not without its silver linings. During his stay, he met and fell in love with one of Granny’s Female Furies, a warrior by the name of Big Barda, who represented his only reprieve from daily suffering.

Together, Barda and Scott hatched a plan to escape Apokolips. They would go to Earth and start a life together, free of the political maneuverings and wars of their homeworlds.

On Earth, a famous performer named Thaddeus Brown who used the stage name “Mister Miracle” trained Scott in illusion and escape artistry. Eventually, Brown passed the name on to Scott as he began performing and gaining a public following himself. Scott’s life as a “super escape artist” also garnered him the attention of DC Super Hero teams like the Justice League International, which both he and Barda joined to put their considerable and specialized skill sets to use.

Scott is a New God, which means he is ageless and near-immortal by human standards. He has enhanced endurance, from both his physiology and the childhood he spent subjected to torture and cruelty. He also possesses superhuman strength, speed and fighting ability.

In addition to his training in escape artistry, Scott has access to New God technology such as his Mother Box, a small, living computer capable of analyzing environments, accessing information and producing Boom Tubes for teleportation. Scott also has Aero-Discs, which allow him to fly.

Scott is one of the few people to ever possess full knowledge of the Anti-Life Equation, a cosmic-level power of frightening proportions long sought by Darkseid. 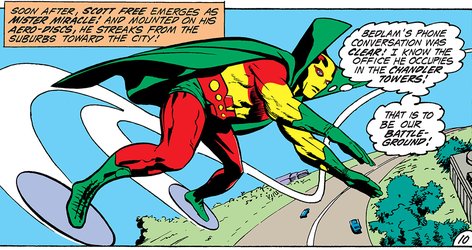 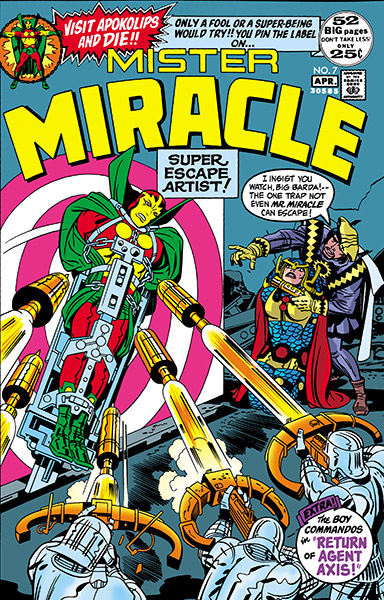 Scott’s childhood in one of Apokolips’ many Terror Orphanages initially afforded him no knowledge of his parentage or origin. While he was relentlessly tortured, he was secretly trained by a rebel named Himon, who was gathering agents to overthrow Darkseid’s totalitarian regime. It was through this training that Scott met Big Barda, and the two fell in love.

Scott escaped from Apokolips to Earth with little difficulty, but it was later revealed that Darkseid had intended for Scott to escape, thus breaking the treaty between Apokolips and New Genesis and reigniting the war.

Upon arriving on Earth, Scott was taken under the wing of an escape artist named Thaddeus Brown, who used the stage name Mister Miracle. With Thaddeus’ help—and the assistance of the advanced technology he’d brought with him from Apokolips and New Genesis—Scott became an accomplished escape artist. Following Brown’s death, Scott took on the Mister Miracle mantle—but his career as a performer was interrupted by Darkseid, who’d sent agents to Earth to recapture both Scott and Barda. 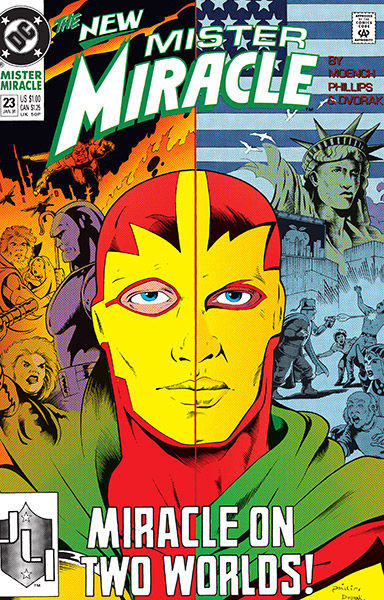 Following 1985’s CRISIS ON INFINITE EARTHS, the Justice League was reformed with an all-new roster as Justice League International. Both Scott and Barda joined the team. When not acting as Super Heroes, the couple attempted to live a quiet, suburban life as a married couple, and were happy to leave the war between New Genesis and Apokolips behind them

But one too many close calls with the League made Scott give up his life as a hero and the Mister Miracle mantle. A new hero took his place, Shilo Norman, the former sidekick of the original Mister Miracle (Thaddeus Brown). Shilo was featured in 2006’s SEVEN SOLDIERS: MISTER MIRACLE.

In the buildup to 2008’s FINAL CRISIS, the New Gods were stalked and killed by an unknown assailant. Barda was among the victims, sending Scott into a depressive episode he was unable to recover from. He eventually traveled to the Source Wall and, feeling betrayed and manipulated by the cosmic forces that conspired to take his wife from him, begged to be killed. The Source listened, and destroyed him.

It wasn’t until after the events of FINAL CRISIS that the New Gods—including Scott and Barda—were reborn into a “Fifth World,” which lasted until the continuity-reshaping events of 2011’s FLASHPOINT. 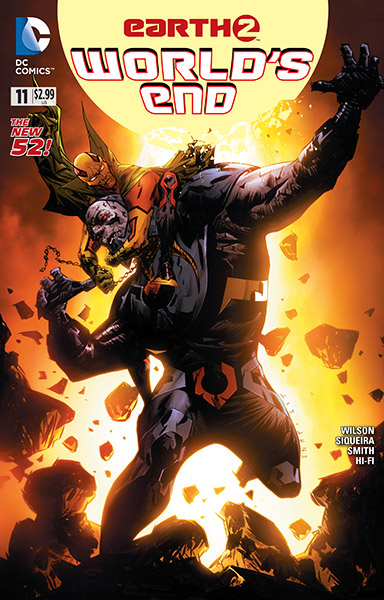 The post-FLASHPOINT continuity saw Scott slightly reimagined, using the name “Scot” as his birth name and Scott Free as his human alias. Both he and Barda were residents of Earth-2 (as seen in 2013’s EARTH 2), and again caught in the endless war between Apokolips, New Genesis and their adopted home.

Scot and Barda’s relationship was also reconceived, and the stories told on Earth-2 were set before they fell in love and were wed. In this version of events, Scot was never sure if he could trust Barda, after multiple betrayals orchestrated by her to help Apokolips and Darkseid rise to power (EARTH 2 #12).

After Apokolips’ destruction of Earth-2, Scot and Barda reluctantly escaped but found themselves caught in the “Darkseid War” (2015), which brought Super Heroes and Super-Villains from multiple Earths together against the armies of Apokolips.

The events of DC UNIVERSE REBIRTH #1 (2016) returned Scott and Barda to their pre-FLASHPOINT status quo. They then lived as a happily married couple in Los Angeles, California (MISTER MIRACLE #1, 2017), where Scott was a famous escape artist and performer. His history with New Genesis and Apokolips was restored, as well as his history with teams like the Justice League.

But his normal life was threatened by unrest on New Genesis, pulling both Scott and Barda back into the life they’d tried so desperately to escape.