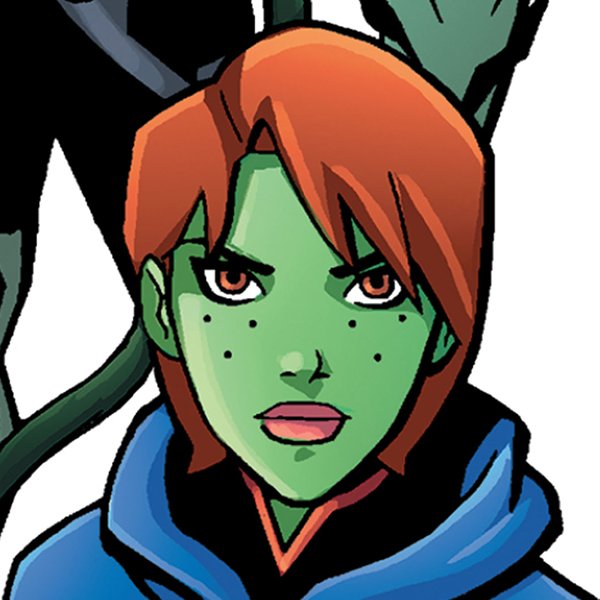 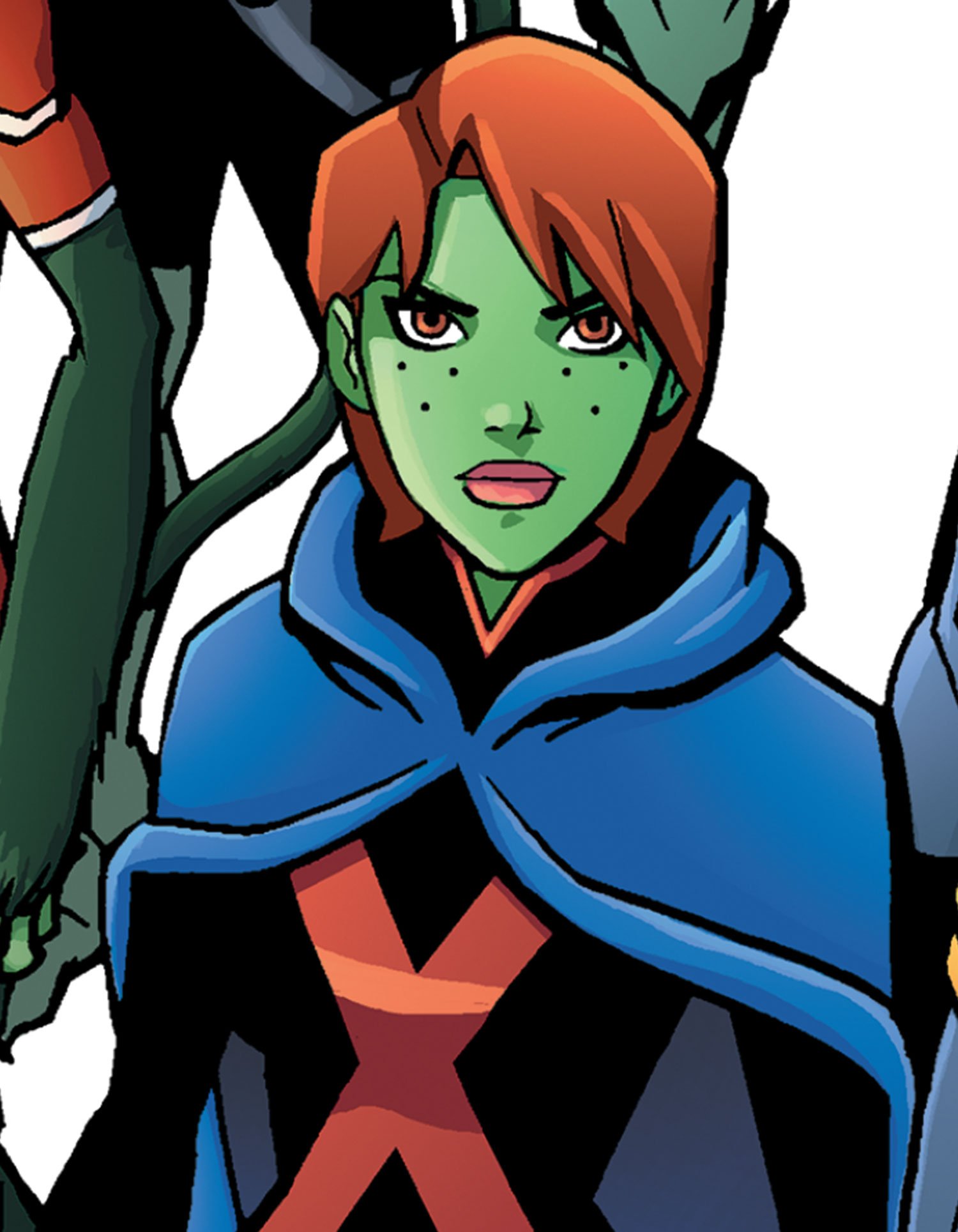 A white martian forced to contend with her destructive heritage, M'gann M'orzz battles injustice alongside her mentor, the Martian Manhunter, and the Teen Titans.

A white martian forced to contend with her destructive heritage, M'gann M'orzz battles injustice alongside her mentor, the Martian Manhunter, and the Teen Titans.

Born on the planet Mars, M’gann M’orzz is a White Martian and is thus a shape-shifter with telepathic powers and a host of other abilities. Sent away by her parents to avoid the horrific events of the Martian civil war, M’gann arrived on Earth and decided to follow in the paths of DC Super Heroes such as the Martian Manhunter. Adopting the appearance of a Green Martian, M’gann embarked on a heroic career as “Miss Martian.” She has since worked alongside some of Earth’s greatest Super Heroes in the Justice League, and as a Teen Titan. A caring and altruistic person, she’s haunted by the fear that one day she could succumb to the violent conqueror values of White Martian society. 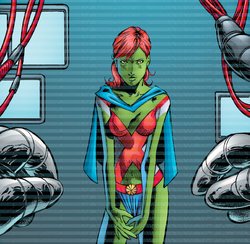 In the universe of DC Comics, the planet Mars houses two races: the White Martians and the Green Martians. The White Martians embraced conquest, whereas the Green Martians were largely peaceful. This led to repeated conflicts and wars, with members of each society learning to hate and fear the other side. M’gann’s parents decided to spare their child what would escalate into a world-ending conflict, and sent her away to the Vega system on a small starship (as referenced in BRIGHTEST DAY #8, 2010).

What happened to M’gann in the Vega system and how long she stayed there aren’t known. But she eventually learned that while the Martian races were largely wiped out due to a plague (MARTIAN MANHUNTER  #0, 1998), M’gann’s parents had escaped to Earth. Unfortunately, they were discovered by the U.S. government and executed (MARTIAN MANHUNTER #1-8, 2006-07).

She also discovered that a Green Martian named J’onn J’onzz had found a new home on the planet Earth and was acting as a Super Hero called the Martian Manhunter. Journeying to Earth herself, she became familiar with the cultures of humans largely through popular media. In contrast to White Martian society, M’gann preferred to live in peace and wanted to find fun and friendship. She decided to become a Super Hero, too, and took on the appearance of a Green Martian so she wouldn’t frighten those who knew of the behavior of White Martians.

Miss Martian joined the Teen Titans following the events of INFINITE CRISIS. She wound up a trusted ally to many of Earth’s heroes, including the Justice League, even after she confirmed that she was a White Martian. 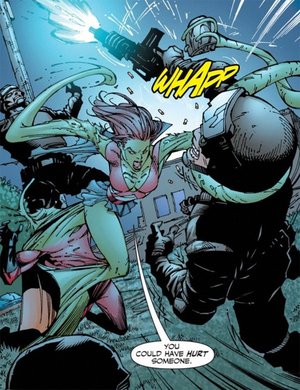 As a native Martian, M’gann is a powerful shape-shifter. This ability allows her to alter her appearance, shift her mass, regenerate injured tissue, become invisible and even, with effort, intangible. Martians have heightened senses as well as telepathic abilities, though M’gann does not like to force her mind into others. Martians are also gifted with great strength, resistance to injury and flight.

Martians suffer from pyrophobia. In the presence of flame, they experience great fear. If the flame is large or strong enough, they suffer a psychosomatic reaction that shuts down their powers and weakens their bodies. Their resistance to injury drastically drops, and they become far more vulnerable to physical attacks. 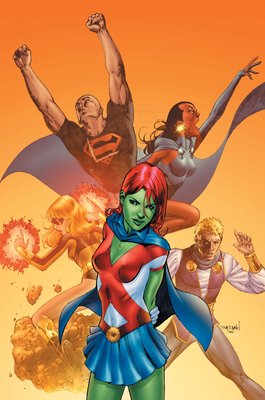 When she first joined the Teen Titans, M’gann’s teammates didn’t understand her, and she soon left the group. On her own, she operated as a hero in Australia, but returned to the team during an adventure in which the Titan called Bombshell was revealed to be a traitor (TEEN TITANS #37-41). M’gann’s White Martian nature was revealed during these events, but her efforts to protect the Titans convinced them she could be trusted. She was welcomed back onto the team.

The Titans later fought a group of Super-Villains Deathstroke had recruited specifically to battle them, in 2007’s TEEN TITANS #43. Due to her fire-based abilities, the villain Sun Girl proved a particular problem for M’gann. A time-traveler, Sun Girl claimed M’gann’s actions in the future would lead to the surviving Martians’ enslavement. Miss Martian eventually defeated Sun Girl by forcing her underwater, dousing her flames. It was later revealed that in Sun Girl’s future, she kept M’gann as a personal slave.

In 2007’s TEEN TITANS #51, the Teen Titans met another group of villains: themselves, from the future. This “Titans Tomorrow” team included an older version of M’gann who now used the name Martian Manhunter and embraced her White Martian appearance and aggressive nature. M’gann was startled by her own potential for evil. During the battle, Miss Martian beheaded her future self, but the older M’gann saved her own life by transmitting her consciousness into her younger self. Afterward, M’gann would frequently wrestle against the influence of her older self.

M’gann established a human identity as “Megan Morse,” attending Arizona’s Wolfman and Perez High School. But after repeated evidence that her dark future self could still influence her, she decided it would be safer to leave the team and find a solution for her divided mind on her own. She left in 2008’s TEEN TITANS #62. 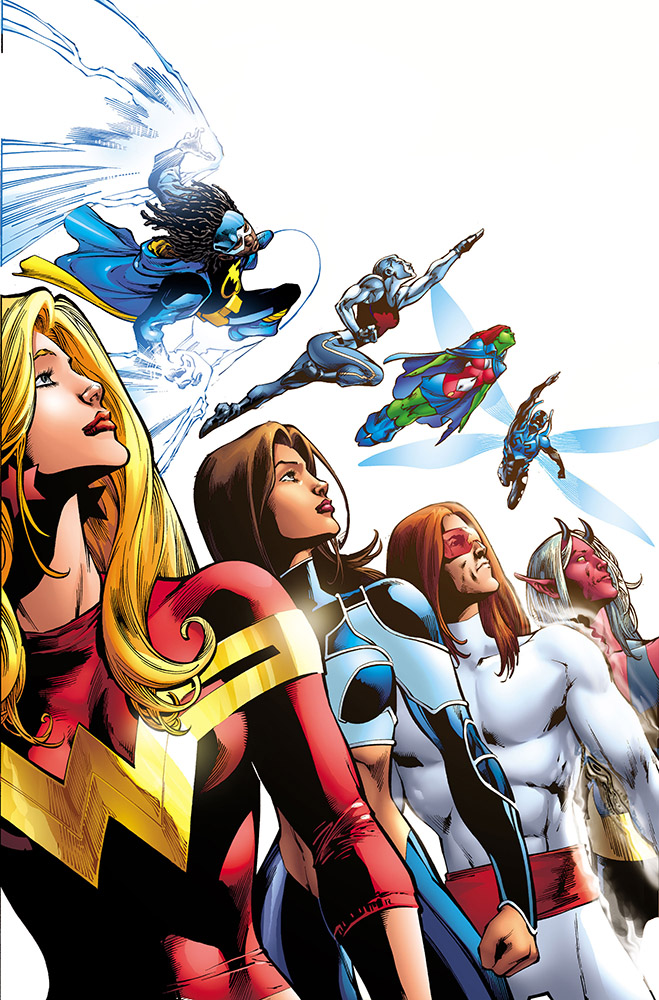 Final Crisis and Beyond

A more stable M’gann later appeared when she disguised herself as the hero Star-Spangled Kid and infiltrated the Dark Side Club in 2009’s TERROR TITANS. Under the control of Darkseid, the club was a safe house where he kept children and teenagers whom he brainwashed to serve his will. M’gann used her telepathy to free the kids and led them against the Terror Titans. Victorious, they left the Dark Side Club and M’gann helped Earth’s heroes and the agency Checkmate against the threat of FINAL CRISIS in 2009. When FINAL CRISIS concluded, M’gann rejoined the Teen Titans as a full member in 2009’s TEEN TITANS #69, but took another leave of absence a few months later.

Following the events of NO JUSTICE, Nightwing’s team of Titans underwent a radical reformation, now incorporated into an expanded Justice League. In TITANS SPECIAL #1 (2018), Miss Martian is planted on the roster by Martian Manhunter himself as a liaison between the two teams. As the only team member not handpicked by Nightwing, M’gann was initially viewed as a “babysitter” and was met with coldness and mistrust. But eventually, the team gets to know her and accepts her as one of their own.

One of the biggest differences between DC Comics continuity and the Young Justice TV series can be found on Mars. Unlike most versions of the DC Universe, the Mars of Young Justice remains home to a thriving, advanced civilization of White and Green Martians, each far from extinct — though it is suggested throughout the series that Green Martians may enjoy a higher social status than their White counterparts.

One such citizen is M’gann M’orzz, a young Martian with an affinity for superheroics and Earth culture… and who holds a few deeply guarded secrets.

Shortly after Robin, Kid Flash, Aqualad and Superboy found their own team, Martian Manhunter of the Justice League introduced M’gann to the group as his niece. Going by the codename “Miss Martian,” M’gann quickly established herself as integral to Young Justice by providing a psychic link between members for communication. Although Superboy initially mistrusts her ability to peer into his mind, he soon came to see her as not just a teammate, but a romantic interest.

On a mission to Bialya, Miss Martian had her first battle against Psimon, a telepathic agent of The Light, where she restored the blocked memories of her fellow teammates. And when M’gann and Superboy go undercover to infiltrate Belle Reve Penitentiary, their romance blossomed as they shared their first kiss.

Months later, on a mission to Qurac, Young Justice met Marie Logan, a retired actress who looks remarkably like M’gann in her human identity. They soon learn that M’gann based much of her appearance and personality on episodes of an old, unsuccessful sitcom called Hello, Megan!  Under duress, M’gann admitted she had been hiding her true Martian form. She also assisted Marie’s son, Garfield Logan, after he’s hurt in an explosion by transmuting her own blood to match his rare blood type — an incident which we later learn may have triggered his metagene. But it’s not long before Queen Bee, one of the leaders of The Light, attempts to blackmail M’gann over her true identity, as revealed to her after M’gann’s psychic battle with Psimon.

M’gann wrestled with this dilemma for a while, but ultimately chose to put her faith in her team. Before Queen Bee can use her secret against them, she voluntarily revealed that she had been a monstrous White Martian this whole time, using her shapeshifting abilities to masquerade as a Green Martian. Once again, Young Justice proved their loyalty by accepting her for who she is, and together they launched a crucial assault against The Light.

Five years later, we find Miss Martian still with Young Justice, now dating new member Lagoon Boy. We also find her having accepted the role of a foster sister to Garfield Logan, now serving as the changeling Beast Boy, after his mother Marie was tragically killed by Queen Bee.
Later, Superboy admits that he pushed M’gann away during the interim over his own crisis of identity. Left hardened by Superboy’s rejection, M’gann throws herself entirely into her missions with Young Justice, to a dangerous degree. When they are tasked with uncovering and repelling an alien invasion of Earth, M’gann begins to “brain blast” enemies and captives for information — a process which proves effective but leaves the interrogated party comatose.

The ethics of this technique finally catch up with M’gann when she uses her brain blast on a turncoat Aqualad, who to her horror she discovered had been playing double agent for Young Justice this whole time. With Aqualad comatose and hospitalized, M’gann vowed to never probe another mind again. Eventually, fellow team member Artemis helped M’gann find redemption by encouraging her rediscover her heroic roots, and restore Aqualad’s mind.

M’gann and Lagoon Boy eventually broke up over the realization that she still harbored feelings for Superboy — feelings which were rekindled when the couple reunited after defeating the invasion of The Reach.

Two years later, Miss Martian functions as the new team leader, now fully embracing her White Martian heritage in appearance. When M’gann expresses her concern over Superboy joining up with Nightwing’s renegade team of Outsiders, he confirms the importance of their relationship by proposing to her — which M’gann accepts.

Later, M’gann took a few members of Young Justice with her to aid the New Gods, who have been framed for an attack on the Bugs of New Genesis. To her dismay, M’gann learned that her own brother, Ma’alefa’ak, was behind the deception. Ma’alefa’ak confessed to M’gann that he was now working as part of the alliance between Darkseid and The Light, in an attempt to secure a better future for the oppressed White Martian race.  With the battle between Young Justice and The Light now a family matter, the extent of Miss Martian’s future involvement remains to be seen.

Miss Martian was created by Geoff Johns as substitute for Supergirl in his TEEN TITANS line-up, as Supergirl was being used at the time in LEGION OF SUPER-HEROES. (Submitted by user HubCityQuestion)