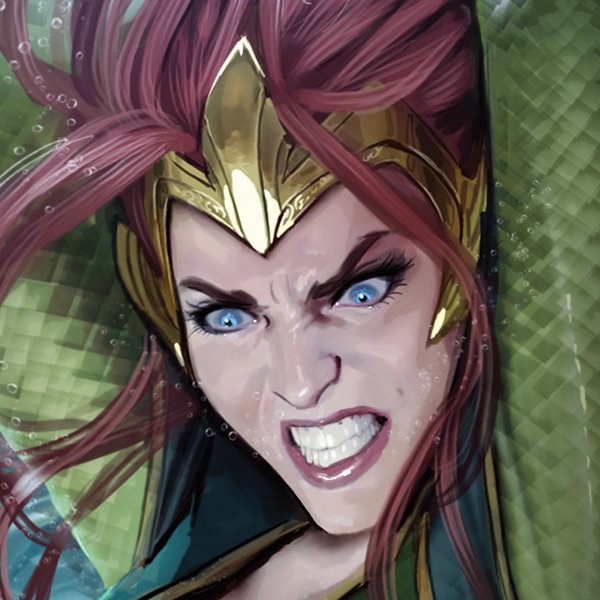 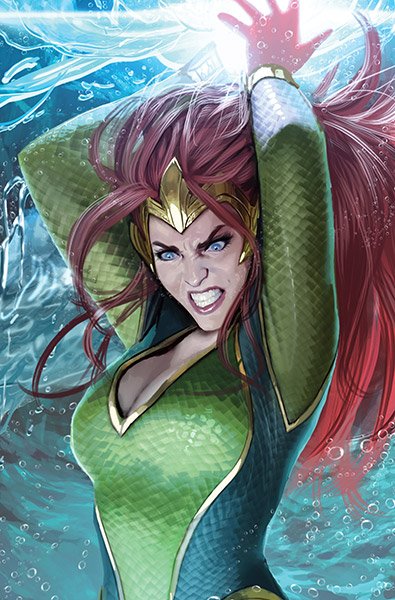 Though not a native of Atlantis, Mera is queen of the fabled underwater realm alongside her soulmate Aquaman. With her hydrokinetic powers, she defends both land and sea.

Though not a native of Atlantis, Mera is queen of the fabled underwater realm alongside her soulmate Aquaman. With her hydrokinetic powers, she defends both land and sea.

Fighting alongside Aquaman, the flame-haired warrior Mera has become a trusted protector of Atlantis and a respected DC Super Hero in her own right. Though she’s often felt Earth’s surface people haven’t earned the love and care Arthur Curry has had for them, she defends them as he would, sharing his hope that air-breathing humans and water-breathing Atlanteans can forge a lasting peace. To that end, she, like the man she loves, has worked alongside the Justice League, earning the respect and friendship of Earth’s champions.

In her original history, Mera was said to have been the queen of the water-breathing kingdom Xebel in another dimension, Aqua. After a coup removed her from power, she fled to Earth-One and recruited Aquaman’s help. After her usurper, Leron, was defeated, Mera abdicated her throne. She then stayed with Aquaman in Atlantis, later marrying him. This origin, first told in AQUAMAN vol. 1 #11 (1963), has been altered considerably over the years, and is no longer considered the official account.

In the modern DC Universe, the people of Xebel were separatist Atlanteans who were exiled by its ancient royal family. The Xebel penal colony was placed in an area of Atlantis that was then separated from the rest of the world by a dimensional barrier, one that could only be breached by shipwrecks from above. This area became known as the Bermuda Triangle (BRIGHTEST DAY #6, 2010). Over time, Xebel became its own society, with its own royal family. The rulers of Xebel did not acknowledge their true history. Instead, they claimed they’d been wrongly exiled by the corrupt and power-hungry rulers of Atlantis (SECRET ORIGINS vol. 3 #5, 2014).

Centuries after the exile began, King Ryus ruled Xebel and had two daughters, Hila, who would later adopt the name Siren, and Mera. Ryus told Mera, his eldest child, that it would be up to her one day to slay the ruler of Atlantis for exiling their people, and to prevent the Atlanteans from one day declaring war on the colony (AQUAMAN vol. 7 #6, 2012). Starting at an early age, Mera trained to be a warrior and assassin. Inheriting the royal family’s aquakinetic abilities, she became a powerful “water shaper.”

As a young adult, Mera was told by Ryus that it was time to carry out her mission. Military Chief Nereus, betrothed to Mera, insisted that he undertake the mission instead. But Mera was confident she would kill the ruler of Atlantis, whomever it was. She journeyed to the outside world through a small space-time fissure in the dimensional barrier (SECRET ORIGINS vol. 3 #5, 2012).

Mera was amazed to discover the current (and newly crowned) King of Atlantis was a hybrid named Arthur Curry, who spent his time protecting surface people and sea life. When Mera encountered this “Aquaman,” she learned he had no hatred for Xebel and no plans for conquest or subjugation. Mera then listened to a message left behind by her late mother. It turned out the queen of Xebel herself had suggested sending Mera into the outside world. Not so she could be a warrior, but so she would be free from obligation and decide to live whatever life she chose (SECRET ORIGINS vol. 3 #5, 2012).

Mera decided to stay with Arthur for a while, telling him she was an exile from a lost realm. The two fought alongside each other. In time, Mera and Arthur fell in love and eventually, ashamed of the lie, she told him the truth. To her surprise, Arthur accepted her still, and the two remained lovers and comrades in arms (BRIGHTEST DAY #6, 2010). 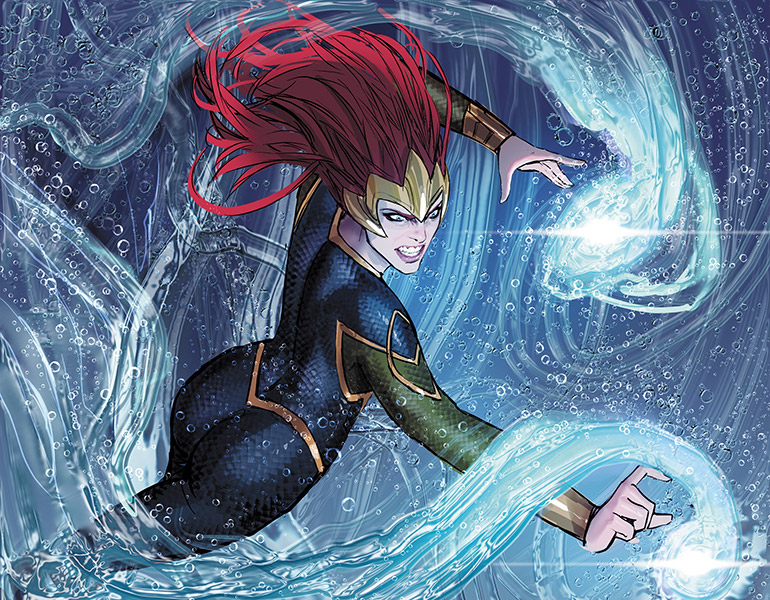 Mera is an Atlantean of the colony Xebel. Like all Atlanteans, she is superhumanly strong and resistant to injury. Mera appears physically more powerful than most Atlanteans, with greater strength and swimming speed. Though not bulletproof, her body offers far more resistance to gunfire than an average person’s would. She can breathe underwater and in air, and, like all Atlanteans, her senses are more advanced than those of a surface dweller. Her sight (including limited night-vision) and hearing are particularly acute. While on the surface, she is more prone to dehydration than the average human being.

Mera possesses aquakinesis (sometimes called hydrokinesis), meaning she can mentally manipulate water around her. In its most direct form, she can form and harden water into shields, battering rams, walls and weapons she can animate in the air. Aquakinesis also allows Mera to sense the direction and location of large bodies of water, and to sense when large objects, bodies or ships are moving through water in her surrounding area.

With focus, Mera can also remove water from various sources, such as engines or even human beings, weakening her enemies during a fight.

Mera is an expert in Atlantean martial arts, hand-to-hand combat, and weaponry. While serving with the Justice League, she has wielded a battle quindent similar in design to Aquaman’s mystical weapon. 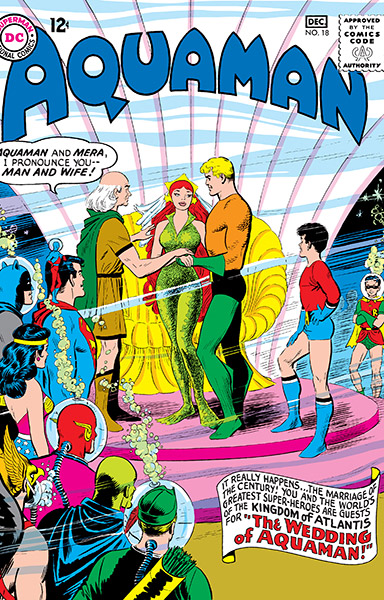 In Mera’s original history, she married Arthur not long after their first meeting, in an underwater ceremony attended by the Justice League (AQUAMAN vol. 1 #18, 1964). This led to the birth of their child, Arthur Jr. (sometimes called “Aquababy”), a year later (AQUAMAN vol. 1 #23, 1965). After many years of happiness and adventure, Arthur Jr. was kidnapped by the villain Black Manta and murdered (ADVENTURE COMICS vol. 1 #452, 1977). Mera went on a quest to bring back technology that would save her son, but she returned too late and found that Arthur Jr. had died (AQUAMAN vol. 1 #58-60, 1978). This led to her and Arthur’s marriage falling apart. Shortly thereafter, she appeared to have died during a fight only to resurface years later with another child, named A.J., before finally reuniting with Arthur. These events, however, do not apply to the modern DC Comics Universe, which has had its history revived on a few occasions. In the current history, Arthur and Mera have never married or had any children.

In the New 52 continuity, sometime after Mera and Arthur fell in love he decided to leave the throne of Atlantis to his half-brother Orm, a.k.a. Ocean Master. Mera was relieved, believing she and Arthur would never be accepted by the Atlanteans because they were seen as outsiders. The two of them moved into his childhood home, a lighthouse in Amnesty Bay (AQUAMAN vol. 7 #1, 2011). Despite her reservations about surface people, and after a few angry confrontations with the police, Mera eventually felt at home in Amnesty Bay.

Mera was instrumental in helping Arthur against numerous foes and in helping to stop a war between the U.S. and Atlantis (JUSTICE LEAGUE #15-17, 2012). After the war was stopped, Aquaman’s half-brother Orm was taken into custody by U.S. authorities for wrongfully attacking its borders. This left Arthur to take the throne in Atlantis. After some hesitation, Mera joined him as royal consort. She now not only helped him against Super-Villains on the surface world, but also with duties to the kingdom; sometimes acting as his official representative. 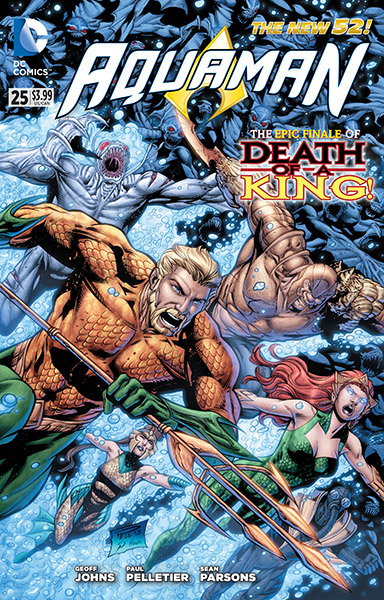 Soon after Arthur took power, the original “dead king” of Atlantis, King Atlan, returned from his tomb to unleash havoc and take back his kingdom. Before he was defeated, Mera wound up returning to Xebel and discovered that her former fiancé, Nereus, now ruled. The people of Xebel, now considering Mera a traitor, gained access to the outside world and served under King Atlan, helping to subjugate the rest of Atlantis. Atlan and the Xebel forces were overthrown. But Mera found the people of Arthur’s court had new reason to distrust her because of her heritage, even though she’d fought for their freedom (AQUAMAN vol. 7 #18-25, 2013-2014).

After discovering strange structures and signs of invasion, Arthur left to investigate and decreed that Mera was Queen of Atlantis and in charge while he was away (AQUAMAN vol. 7 #42). Unfortunately, Mera was soon replaced by her sister Hila, now called Siren, who impersonated her with the aid of a group of corrupt sorcerers known as the Coven of Thule. As Mera, Siren weakened Atlantis for their invasion. But Arthur and the true Mera were able to turn the tide and defeat both Siren and the Coven.

Not long after this, Mera decided to become the face of a campaign to improve relations between Atlantis and the surface world nations. To help market herself as Aquaman’s wife, she decided to take her “Aquawoman” nickname to heart and adopted a version of his costume (AQUAMAN vol. 7 #49, 2016). 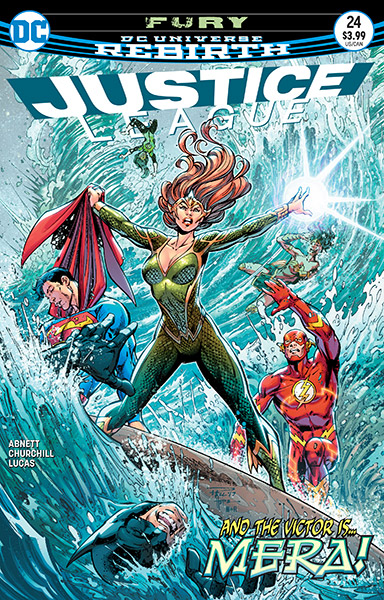 Arthur proposed marriage to Mera and she accepted in 2016’s DC UNIVERSE: REBIRTH #1. Over the next several months, Atlantis at last made progress in being recognized as a nation by the U.N., only to then be blamed for terrorist attacks against the U.S. These attacks were carried out by a criminal organization called N.E.M.O. and by Atlantean extremists known as the Deluge. Mera and Aquaman did their best to keep conflicts from escalating, and, in the end, they exposed the real culprits and were hailed as heroes worldwide (AQUAMAN vol. 8 #1-15, 2016-2017).

But Arthur’s court and some of the Atlantean population grew convinced his and Mera’s loyalty to the surface nations superseded their loyalty to Atlantis. What’s more, the Widowhood of Atlantis warned Mera repeatedly she should not be Arthur’s queen, as a prophecy said a woman of Xebel blood would watch her king fall and lead Atlantis to destruction (AQUAMAN vol. 8 #10, 2016). Mera wondered if she shouldn’t marry Arthur, but he refused to believe their lives were controlled by a prophecy.

Corum Rath, former leader of the Deluge, led a coup and took the throne of Atlantis for himself. While Mera escaped, Arthur was seemingly killed (AQUAMAN vol. 8 #23-24, 2017). Mera fell into depression, but then received news that Arthur was alive. Though she was unable to reach her beloved due to a barrier placed around Atlantis, the Justice League offered Mera friendship and a place to belong. She joined them on several adventures before reuniting with Aquaman. After forging a shaky alliance with Ocean Master to bring the people of Xebel to her aid (MERA: QUEEN OF ATLANTIS), Mera helped Aquaman and the people of Atlantis’s Ninth Tride dethrone Corum Rath once and for all. Upon his defeat, it was decided that Mera- not Aquaman- would henceforth be the rightful ruler of Atlantis.

Mera’s rule has been plagued by difficult challenges, with an incursion by the Suicide Squad (AQUAMAN/SUICIDE SQUAD: SINK ATLANTIS) shortly followed by an assault by interstellar ocean gods (DROWNED EARTH). But perhaps the greatest challenge yet has come with the arrival of a shocking personal development: the Queen of Atlantis is pregnant.