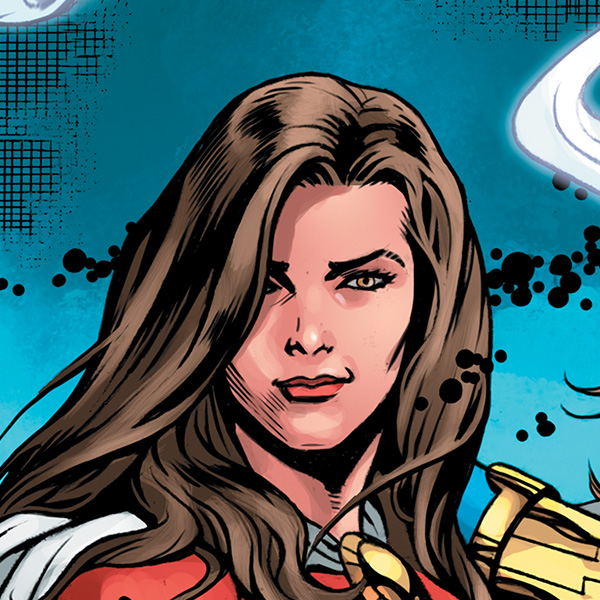 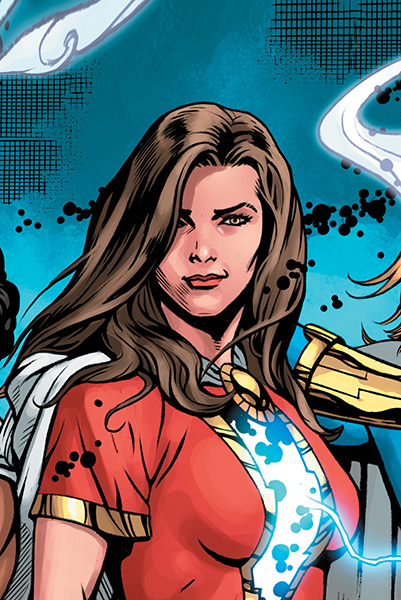 Drawing her lightning power from the same magic that powers Shazam, Mary Marvel is also known as Lady Shazam.

Drawing her lightning power from the same magic that powers Shazam, Mary Bromfield brings a dose of well-needed maturity to her youthful family of heroes.

Sometimes fate can surprise you. Mary Bromfield was the long-lost twin sister of Billy Batson before they were both orphaned as young children and Mary ended up in the care of the wealthy Bromfield family. Years later, after Billy had unlocked the powers found within the Rock of Eternity and become Shazam, he finally met Mary at a contest being held at the radio station where he worked, WHIZ Radio. Not long after, Mary was kidnapped for ransom money and was saved by Shazam and Captain Marvel Jr. Wondering if she could access the powers of the wizard Shazam like her brother, she uttered the magic words and she too transformed into a superhero and started adventuring as part of the Shazam Family. 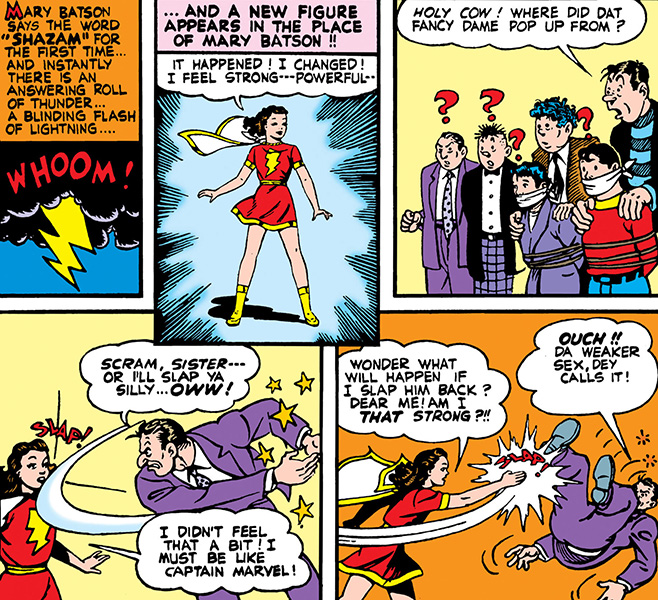 Mary Batson was born as the twin sister of Billy Batson, and both of them were cared for by a nanny named Sarah Primm. When the young children were orphaned after their parents died in a tragic car wreck, Primm substituted Mary for the baby girl of another family she also nursed for who had suddenly died, and then sent Billy to an orphanage, separating the twins for their entire early childhoods.

Some ten years after his parents' death, Billy Batson was now an on-air reporter and personality for WHIZ Radio, as well as the Super Hero Captain Marvel. He met his sister Mary Bromfield when she was competing in an on-air contest with several other contestants. Coincidentally, during this contest Billy received an urgent message from Sarah Primm, who was dying and requested to see him right away. On her deathbed, she told Billy about his twin sister, and gave him a locket broken in half. Before she died, she told Billy that his sister wore the other half of the locket.

Remembering that Mary Bromfield also wore a broken locket, he and Captain Marvel Jr. followed Mary's limousine home. But not long after, Mary, who came from a wealthy family, was kidnapped for ransom, and Captain Marvel and Marvel Jr. managed to save Mary. Soon after, Billy Batson discovered that Mary's locket matched his own, and was therefore his long lost sister. Revealing his secret identity to her, Mary wondered if she had access to the power of Shazam, due to being his twin. Billy scoffed at the idea, suggesting the old wizard would never grant such power to a "mere girl." But when Mary said the magic word "Shazam," she transformed into a female version of Captain Marvel, although she retained her teenaged outer appearance.

Mary Marvel had many adventures throughout the Golden Age, both with the rest of the Marvel Family, as well as on her own. After a twenty-year absence, Mary Marvel and the rest of the Marvel Family reemerged, and had several more adventures during the Bronze Age, when she discovered that her Earth was designated Earth-S in the greater DC multiverse.

In the post-CRISIS timeline, Mary Batson's backstory was similar to her Golden Age origin, as she was still Billy Batson's long-lost twin, who was separated from her brother as a young child, and raised by Nick and Nora Bromfield. Reuniting with her brother in her teens, she too discovered she could access the powers of the Rock of Eternity when shouting the magic word Shazam.

While in her Super Hero form, Mary Marvel now resembled an adult, similar to how Billy Batson transformed into an adult hero when he said those same words. In fact, she looked almost identical to her late mother in her super-powered form. To differentiate herself from her brother, she later wore a white costume instead of the traditional red one. For a time, she joined the group of former Justice Leaguers known as the Super Buddies, in which Mary's sunny disposition was a direct contrast to the cynical, sarcastic bunch. To the world at large, Mary liked to be addressed as Captain Marvel as well, although she would sometimes accept the name Lady Marvel.

After the events of the INFINITE CRISIS, Mary Marvel lost her powers mid-flight due to magic being snuffed out in many places in the cosmic upheaval, and suffered a three-mile fall, after which she fell into a coma. During the preceding COUNTDOWN TO INFINITE CRISIS event, Mary acquired the powers of Black Adam, which resulted in her having a new, black version of her uniform. During the course of this series, Mary struggled to control her darker impulses, which came about as a result of her new powers.

During the events of FINAL CRISIS, Mary Marvel underwent an even more dramatic transformation, as she was changed by the power of Darkseid's Omega Effect into a cosmically enhanced vessel for the New God named Desaad, who was Darkseid’s most loyal servant. Once changed, Mary started to appear older, started dressing in an even darker variation of her costume, had a shaved head, and even had claws for hands. This iteration of Mary was seemingly powered by Anti-Life instead of pure magic. Eventually, she lost all of her powers and resumed her life as an average teenager.

After the events of FLASHPOINT, reality was altered once more. Mary is no longer the twin sister of Billy Batson, but is now his adopted sibling; as they are raised by the same foster parents. Not long after Billy Batson begins his heroic career as Shazam, he channels a portion of his powers directly into Mary, along with his other siblings, in a battle with Black Adam. Now presenting herself as an adult Super Hero, Mary goes by the names Mary Shazam or Lady Shazam. 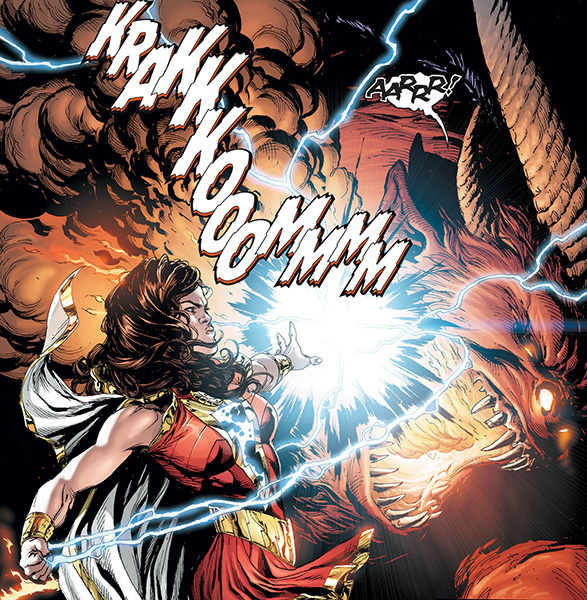 As Billy Batson's sister, Mary Marvel was granted the magical abilities of superhuman strength, durability, speed, reflexes, and flight. She has also shown that she has the powers of electrokinesis, electro-blasts, and has limited teleportation abilities which can take her directly to the Rock of Eternity. She also has accelerated healing and an advanced intellect. Unlike her brother, her powers are derived from a different set of mythological icons, in her case, all female.

In the post-FLASHPOINT reality, it is Billy Batson as Shazam who grants him the power, so he can also take it away at will. When the members of the Shazam Family are using their powers at once, they each have only a fraction of said powers, so Mary is at her strongest when she is the only one using it. 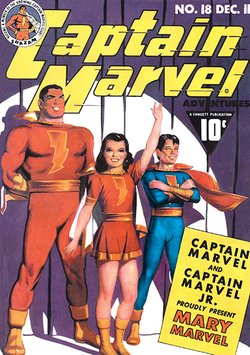 Just a year after Captain Marvel's first spin-off character (Captain Marvel Jr.) was introduced, Mary Marvel became the second spin-off version of the hero. After discovering that Billy Batson is her long-lost twin brother, she quickly finds she too can channel the powers of the wizard Shazam, and embarks on her own heroic career.

A few years after making her debut, Mary Marvel became one of the few female Super Heroes in the Golden Age of comics to receive her own ongoing comic book. In her first story, she faces off against her brother's arch-enemy Sivana, as well as Sivana's daughter, Georgia. 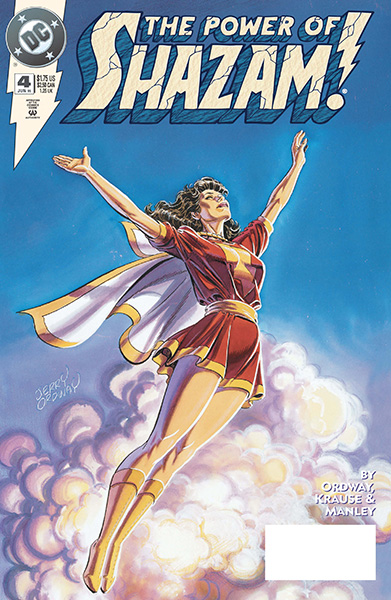 In her first post-CRISIS ON INFINITE EARTHS appearance as a Super Hero, Mary Bromfield discovers that she is Billy Batson's twin sister, and when she utters the magic words "Shazam," she too can transform into a vessel for the powers of the wizard Shazam. This issue also introduces the Shazam family to their talking tiger friend, Tawky Tawny. 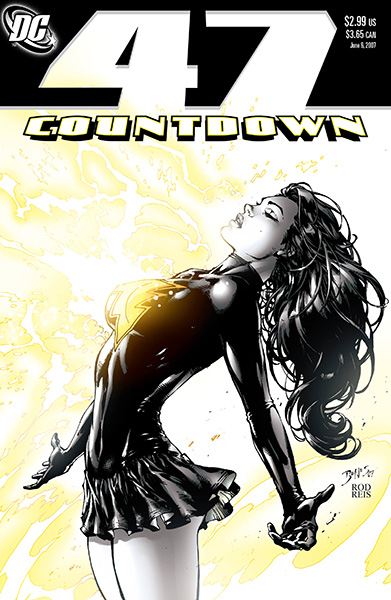 After losing her connection to the powers of Shazam, Mary reconnects with her former adversary Black Adam, who is mourning the deaths of his wife and brother-in-law. He then bequeaths all of his power unto Mary, and she once again transforms into her superheroic self, only now with a costume similar to Black Adam's. This begins a long, dark path for Mary Marvel.

In the post-FLASHPOINT universe, Mary is introduced as one of several foster siblings of Billy Batson's, during the time he was first granted the powers of Shazam. In the conclusion of the storyline reintroducing Billy Batson to the DC universe, Billy grants a portion of his power to his foster sister Mary, who is soon after called "Lady Shazam."