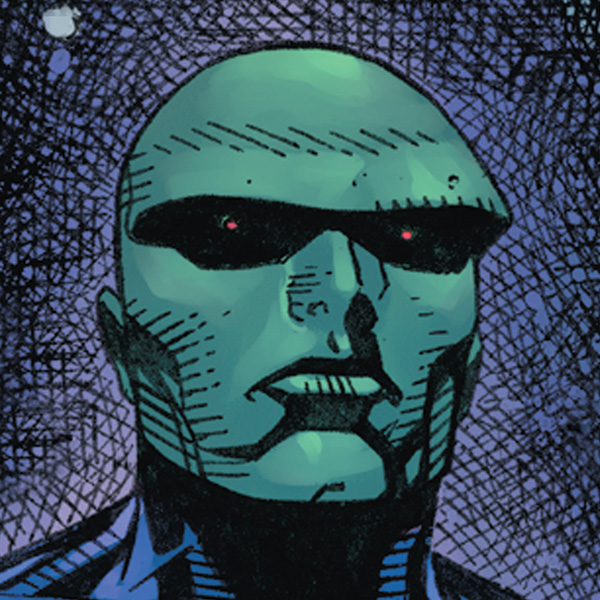 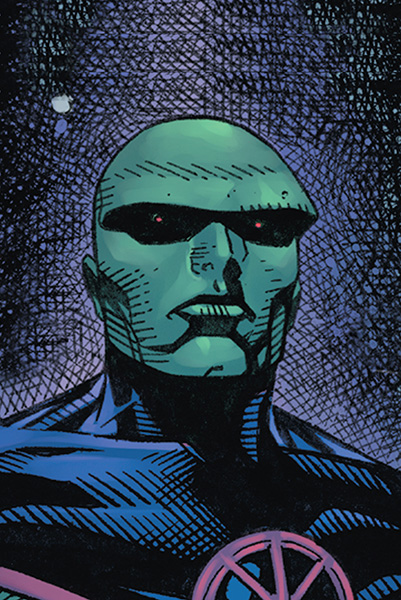 One of the last survivors of the civil war that ravaged his home planet Mars, J'onn J'onnz traveled to Earth and now fights to protect his adoptive home.

One of the last survivors of the civil war that ravaged his home planet Mars, J'onn J'onnz traveled to Earth and now fights to protect his adoptive home.

J’onn J’onzz of the planet Mars was accidentally transported to Earth, where he became one of its greatest champions under the moniker Martian Manhunter. Displaying a vast array of powers that can give even Superman a run for his money, the Martian Manhunter was a founding member of the Justice League of America, and has been a member of almost every incarnation of the League ever since. It has been said by many that J’onn J’onzz is the heart and soul of the League.

One of the last surviving members of his species, the Martian Manhunter wields such powers as the ability to shape-shift, telepathy, flight, invisibility, phasing, flight, super-strength and Martian vision. His only weakness in an inherent fear of fire, which all Martians have. All of these abilities make him one of the most powerful beings on the planet. But it is his brilliant mind and steady leadership style, along with his gentle soul, that have made him a beloved member of the League in all of its incarnations. Indeed, if there is one being whom the rest of the DC Super Hero community looks up to as their elder statesman and the voice of wisdom, it is the Manhunter from Mars.

Although J’onn J’onzz suffered great tragedies in his long existence, including the deaths of his wife, their child and almost his entire race, the Martian Manhunter passionately defends Earth, fighting to make sure his adopted home planet never suffers the same fate as his beloved Mars.

J’onn J’onzz first appeared at the dawn of the Silver Age, when he found himself instantly teleported to Earth from his home planet Mars in a science experiment gone wrong, conducted by the eccentric Dr. Saul Erdel. By creating a special ray with which to communicate with other worlds, Erdel accidentally brought J’onn to Earth. When he first appeared in Erdel’s observatory home, J’onn communicated to Erdel telepathically, explaining who he was and where he came from. Sadly, the shock of transporting an alien from Mars to Earth seemingly killed Dr. Erdel, leaving J’onzz without a way of returning home.

Realizing that his Martian abilities made him far more powerful than ordinary humans, J’onzz decided to fight crime on his newly adopted planet. He used his shape-shifting ability to assume the alias of John Jones, a hard-boiled detective working out of Middletown, Colorado. Eventually J’onzz changed his heroic name to the Martian Manhunter, after the term often used to describe police officers. 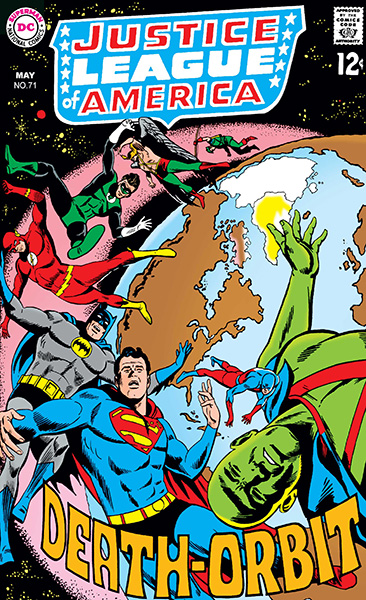 Not long after going public as a green, Martian hero, J’onzz helped save the Earth from an alien invasion along with several other heroes. With his new colleagues, he became a founding member of the Justice League of America. In many ways, the JLA became J’onzz’s new family, replacing the one he’d lost on his dead homeworld. After many years a group of Martian survivors contacted J’onzz, and convinced him to leave the Earth and help them build a civilization on New Mars.

Years later, after returning to Earth and leading a different version of the Justice League, J’onzz found out the truth about his origins. He learned that that Dr. Erdel had not died years before, and that the story of his arrival on Earth as he remembered it was a fabrication. When he first came to Earth, he had actually looked far less humanoid, and the more human form he adapted was because of the physiological trauma he endured—his own mind’s attempts to block out the extinction of his race. (The appearance most people recognize as the Martian Manhunter was based upon Dr. Erdel’s idea of what a Martian should look like based on pulp science fiction stories.) He also learned that he was not only displaced from Mars due to distance, but also time, as the plague that had wiped out his planet, including his wife and child, had actually occurred thousands of years prior.

J’onzz learned that he was born millennia ago, and that the name J’onn J’onzz means “Light to the Light.” He also discovered he had a twin brother who was born a mutant—without the natural Martian ability of telepathy—named Ma’alefa’ak, whose name means “Darkness in the Heart.” J’onzz had become a police officer and married a woman named M’yri’ah, and had a daughter named K’yhm. J’onzz’s brother, however, took the opposite path in life.

Feeling like an outcast due to his lack of mental powers, Ma’alefa’ak caused the genocide of his own race by creating a contagious virus. The virus reacted to telepathic energy and was transmitted from one Martian to another whenever they used their psionic powers. The plague also responded to the Martians’ innate fear of fire, causing them so much mental anguish that they would literally burst into flame. Because of this virus, almost the entire green Martian race was wiped out. The realization of his true past proved heart-wrenching for J’onzz, but he soldiered on as a hero and a member of the Justice League in spite of this new burden. 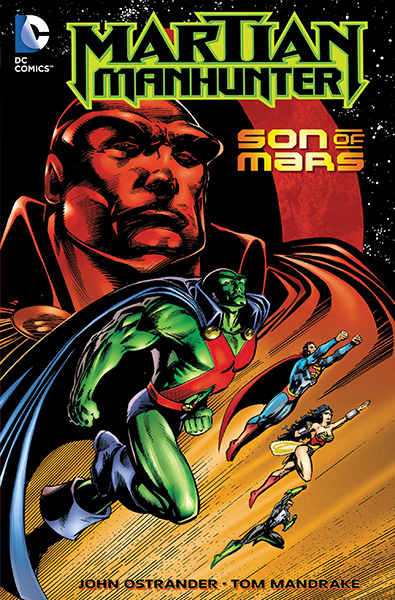 In the wake of 2011’s FLASHPOINT event, the DC Universe’s timeline was changed. In this new reality, J’onn J’onzz’s origins were altered. His time on Mars was now a million years ago, making him one of the most ancient beings on Earth. When still a young man, he and several other young Martians were recruited for a government experiment, or so they thought. It turned out that the government agent who recruited them, whose name was Ma’alefa’ak (like J’onzz’s brother in the pre-FLASHPOINT timeline), double-crossed the young recruits, killing all of the subjects except J’onzz. He then used their blood for a magic ritual that gave J’onzz superpowers, hoping to use him as a weapon. When the Martian race died, J’onzz was flung to Earth, where he lived many lives under many identities. In the 21st century he became a Super Hero, adopting the name Martian Manhunter.

J’onn J’onzz’s first appearance in the post-FLASHPOINT universe reintroduced him as a member of the covert Stormwatch organization. It was revealed that although he had briefly joined the Justice League, he was not a founding member, and had left after a very brief period with the team due to their lack of trust in him. When he eventually quit the Stormwatch organization, he used his telepathy to erase the knowledge of his ever having been a member from the team’s minds.

When the United States government decided to form their own League, the Martian Manhunter was asked to become a part of the team. This version of the League did not last long, and when it disbanded, J’onzz was asked to join a new League based out of Canada known as the Justice League United.

Following the events of DC UNIVERSE: REBIRTH #1, it appears that at least some of J’onzz’s pre-FLASHPOINT history has been restored. The Justice League now refers to the Martian Manhunter as a former member, and the glue that holds the team together. After the Source Wall was breached in the aftermath of 2017’s DARK NIGHTS: METAL, leading to changes in the Multiverse, the Martian Manhunter was asked to become leader of the League, organizing a powerful lineup of the world’s greatest heroes. 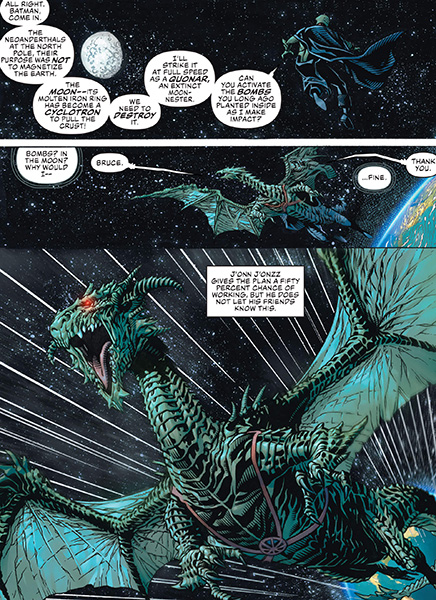 The Martian Manhunter is one of the most powerful beings on Earth. Among his many powers, J’onn J’onzz exhibits the natural Martian abilities of super-strength, invulnerability, speed and Martian vision, which includes X-ray vision and the ability to shoot force beams from his eyes.

Like all members of his species, J’onn J’onzz has an array of mental powers, including telepathy. J’onzz can also become intangible and phase through solid matter, as well as become invisible. As a shape-shifter, he can alter his form not only to look like other beings, but also to change his size and mass. In the post-FLASHPOINT timeline, J’onzz’s natural Martian abilities were augmented against his will as part of a blood-magic ritual while still a young man.

The only thing truly keeping J’onzz from Kryptonian levels of power is his innate Martian weakness to fire. This limitation was originally imposed on the young Martian race by the ancient Guardians of the Universe, who feared the potential problem of billions of beings with such power levels. 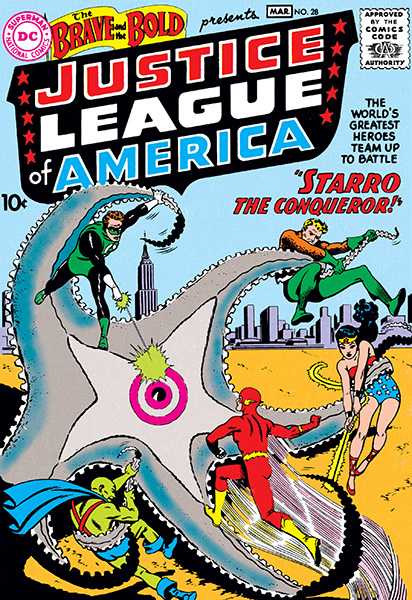 In his very first appearance, the Martian Manhunter became the first new DC Super Hero to appear on the scene since the disbanding of the Justice Society of America. In this backup story, it was revealed how a scientist named Mark Erdel (later changed to Saul) brought J’onn J’onzz to Earth and inadvertently left him stranded here. This first story gave J’onzz’s basic origin, explained his decision to become a Super Hero and established his human identity of “John Jones.”  Although J’onzz sported his famous “beetle brow” appearance in his debut, he soon after became more human in form, before eventually reverting to his original look.

After spending more than a decade away from the Justice League, the Martian Manhunter returned to the team during one of the lowest points in their history. After many of the founding members resigned in the wake of a disastrous attack on their satellite headquarters, J’onzz helped guide a new generation of heroes in an all-new League. Along with some returning veterans, they set up shop in a bunker in Detroit.  After a short stint in the new JLA, two of the younger members became the first Leaguers to die in the line of duty. In light of the tragedy, the Martian Manhunter disbanded the JLA, seemingly for good.

Learning the Truth (THE MARTIAN MANHUNTER, 1988) 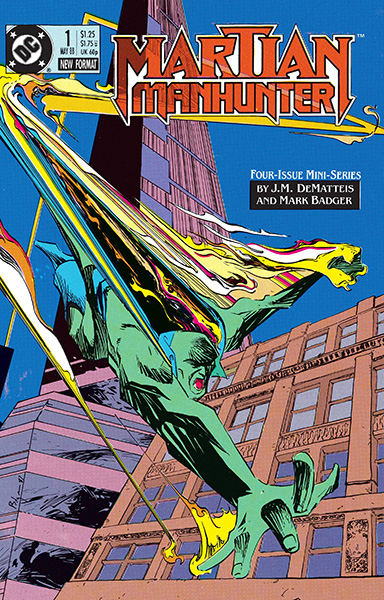 In his first-ever self-titled comic book series, J’onn J’onzz, having found a new purpose with the recently formed Justice League International, discovered the truth of his origins. He suffered a mental breakdown and had hallucinations, and started projecting those hallucinations into reality. During this breakdown, he learned that Dr. Erdel was still alive.

J’onzz then remembered the plague of fire that destroyed his species, as well as the tragic loss of his wife and daughter. He asked Dr. Erdel to teleport him back to Mars, where he learned that his telepathy created a link to the souls of his people who had died during the plague. Due to the psychic link, the Martian souls had not been able to move on into the afterlife for centuries. With J’onzz’s full memories restored, the link was broken, and J’onzz was able to find a measure of peace and return to Earth.

Some time after the seven best-known members reunited as the JLA, J’onzz suffered another heartbreak when he began a relationship with the reformed demoness called Scorch. She removed J’onzz’s fear of fire, but in doing so, she released an ancient fire being named Fernus, which ultimately resulted in her death. This left J’onzz feeling guilt-ridden, and he decided to channel his grief into dedicating himself more fully to the Justice League. 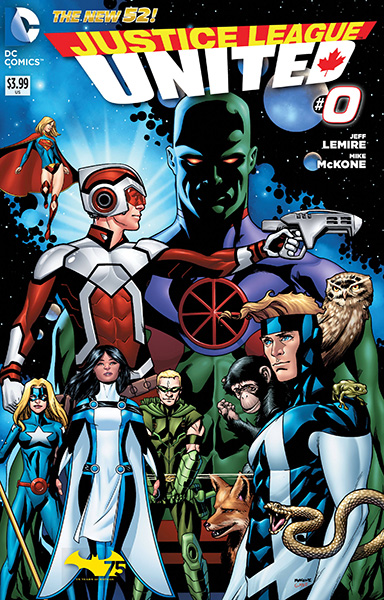 Following the events of 2011’s FLASHPOINT, J’onzz’s history was altered so he had never been accepted as a member of the Justice League. Looking for a place to fit in, J’onzz briefly served as a member of the group known as Stormwatch. After quitting the group, J’onn was recruited by Amanda Waller to join her government-funded Justice League of America, which, unbeknownst to the team, was created to combat the “true” Justice League should the team ever turn against humanity. J’onzz himself was picked as a way to fight Superman.

This new JLA did not last long. But during his time on the team, J’onzz formed a bond with young Courtney Whitmore, alias Stargirl. After this government-backed JLA disbanded, J’onzz and Stargirl formed the Justice League United, a non-national team.