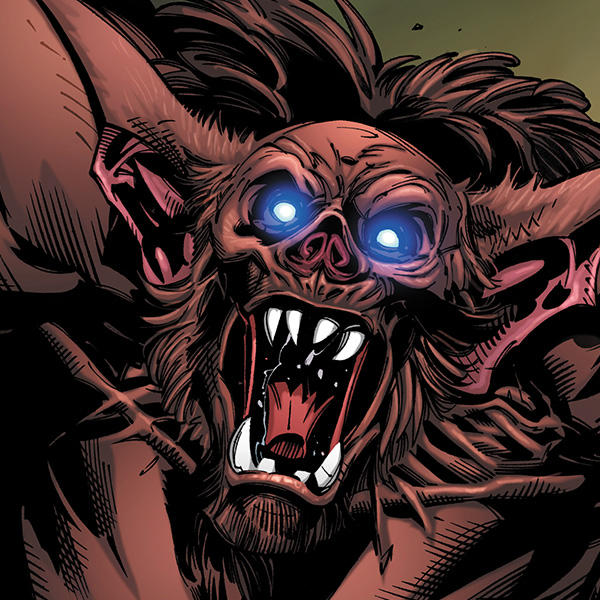 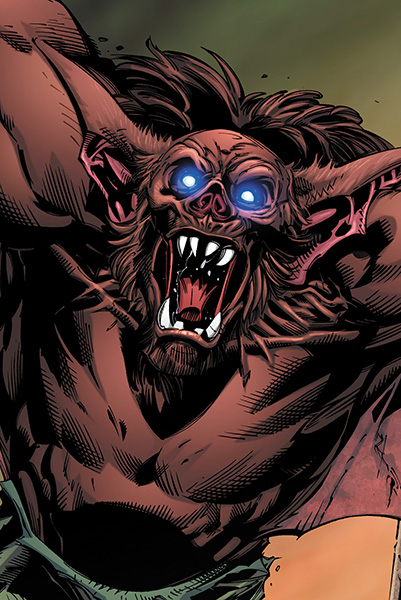 Kirk Langstrom's thirst for knowledge turned him into the tragic Man-Bat -- foe, and sometimes friend, to the Batman.

Kirk Langstrom's thirst for knowledge turned him into the tragic Man-Bat -- foe, and sometimes friend, to the Batman.

The most famous "creature of the night" in Gotham City might be Batman, but there is another who is far more fearsome and deadly – the Man-Bat. Originally a renowned zoologist named Kirk Langstrom, he invented a formula which was intended to give a regular person the sonar sense of a bat, something that could help the vision impaired and the deaf. He unfortunately tested the formula on himself, which transformed him into a half man, half bat creature, with giant leathery wings and razor sharp claws. Losing his sanity upon becoming a sort of "were-bat," he came into conflict with Batman, who was able to restore him to human form once more.

Unfortunately, the Man-Bat persona would continue to reemerge over the years, and at one point even Langstrom's wife and son were similarly transformed into monstrous human/bat hybrids. There were times that Man-Bat lost his sanity and any semblance of humanity and became a villain, and at other times, he maintained enough of his faculties as to use his powers to become a heroic figure, even working alongside the likes of the Justice League Dark. Constantly flipping between the light and dark, the Man-Bat remains one of the strangest and most tragic figures in Batman's rogue's gallery. 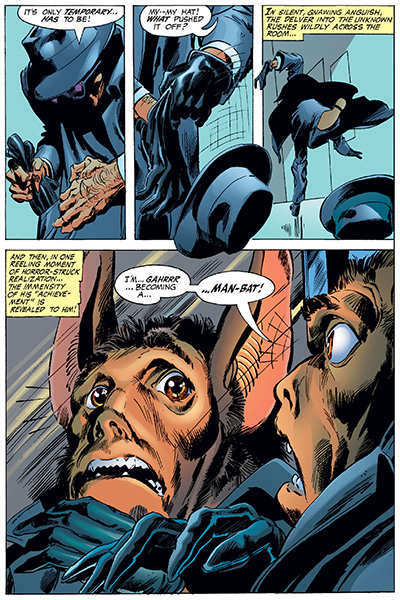 Dr. Robert Kirkland "Kirk" Langstrom was a well-respected scientist who worked at the Gotham Natural History Museum, whose area of expertise was in the study of bats. Having fallen into a cave of bats as a child, Langstrom had always been fascinated by these animals, something that extended into his adult life. Once he began working as a zoologist, he created an extract from bat glands, made with the intention of giving humans the sonar sense of a bat, in the hopes it could help those were afflicted with deafness or blindness.

Unfortunately, Langstrom then makes the mistake of testing the formula on himself, mainly due to the fact that he had recently learned that he was also becoming deaf. Although the formula did work when it came to his hearing impairment, it came with quite a price, as Langstrom then gradually found himself transforming into a man sized bat/human hybrid, developing a bat like appearance, including giant wings. When he first met Batman, he treated the Man-Bat like another hero, after he helps him stop a gang of high tech thieves.

But this new friendship wouldn't last, as soon Man-Bat came into conflict with the Batman when he attempted to steal the chemicals needed to reverse his transformation from a local lab, but finds he has almost no control over his actions when in his Man-Bat persona. In fact, Batman is forced to bring him down and subdue him just so he can deliver the antidote to him, and restore him to normal. Batman manages to cure Langstrom of his affliction for a time, although Langstrom's fiance Francine also becomes afflicted with a similar condition, when Langstrom forces her to take the same formula, and she becomes the She-Bat. Batman manages to cure both of them, and Kirk and Francine soon become engaged.

Eventually, Langstrom manages to refine his serum, which allows him to maintain his human intelligence while in Man-Bat form, and also allows him to control his transformations. He attempts to work as a detective and Super-Hero for a time as Man-Bat, and he marries his fiance Francine, and they have a daughter named Rebecca. Nevertheless, he eventually loses control of the Man-Bat persona again, and stops being able to control the transformations, a situation which causes him to battle Batman several more times. Batman suggests that Kirk and Francine move to another city, and Man-Bat leaves for Chicago, and later, New York. He begins a detective partnership for a time with Jason Bard.

After the events of 1985's CRISIS ON INFINITE EARTHS, Langstrom tries to maintain control of the Man-Bat persona and stay on the side of the good guys. He once even assisted Superman, when Jimmy Olsen inadvertently puts the Man of Steel inside a cave where Man-Bat was hiding out in, shunning the light. Man-Bat then offers to protect the Man of Steel from Kryptonite radiation that had reached Earth years after the destruction of Krypton.

Later, Kirk and Francine have a son named Aaron, but due to the alterations to both Kirk and Francine's DNA due to their nature as bat creatures, their own child is born with a bat-like appearance himself. Given the nickname "Baby Bat," Aaron was sought after by a team of criminals who wanted to use his powers to further their own ends. His whole family had to use the Man-Bat serum on themselves in order to defeat Aaron's kidnappers.

In the aftermath of 2005's INFINITE CRISIS, Kirk and his family attempt a normal life. But the international terrorist Talia al Ghul captures Francine Langstrom, and threatens to kill her if Kirk does not turn over the Man-Bat formula. In a desperate attempt to save his wife, Langstrom then gives Talia the formula, and she makes good on her word and releases Francine. Talia then uses the Man-Bat serum to turn certain members of the League of Assassins into her own personal army of Man-Bat style soldiers.

Some time later, during a time when Bruce Wayne was thought to be dead, several people attempt to assume the Batman role. During this time, Langstrom finds himself captured by the villainous Doctor Phosphorus, who reveals to him that despite what he's believed, the serum is no longer needed to begin the change into the Man-Bat. When Kirk finds out that Phosphorus has also captured his wife, he automatically transforms into Man-Bat to save her life.

However, Francine soon discovers that her husband's next transformation would be permanent if he did not take a newly created cure. Although Kirk attempts to take the cure, his Man-Bat personality won't allow him to do it. Right as Kirk is about to take the cure, Francine is wounded in the events of the Blackest Night, and an angry and distraught Langstrom transforms once again into Man-Bat, this time it seems for good.

Following the events of 2011's FLASHPOINT, almost all of Kirk Langstrom's history is reimagined. In this new incarnation, a villain known as Ignatius Ogilvy comes into possession of the Atavistic Gene Recall Serum, which was still created by Dr. Langstrom to help the disabled, and which he then unleashes upon Gotham City as an airborne virus. It then spreads throughout the city's 900 Block, creating an entire neighborhood of human bat creatures.

Langstrom reveals to Batman that he is the one responsible for the creation of the serum. Now feeling tremendous guilt over the misuse of his creation, he then uses a sample that Batman had procured, and he injected himself with it. By doing so, he creates an anti-virus that also becomes an airborne antidote, curing the afflicted. Although the citizens of Gotham are cured, Langstrom is now the sole Man-Bat creature in Gotham. As in the previous timeline, Langstrom's wife Francine later becomes a bat creature herself called the Bat-Queen, and even his father Abraham takes a version of the formula, becoming a Man-Bat as well.

Eventually, Man-Bat is recruited into the Secret Society during the Crime Syndicate's invasion of Earth. Langstrom is also employed by the secret counter terrorism taskforce called S.H.A.D.E., as well as becoming an instructor at the Gotham Academy, where he becomes the resident science teacher. 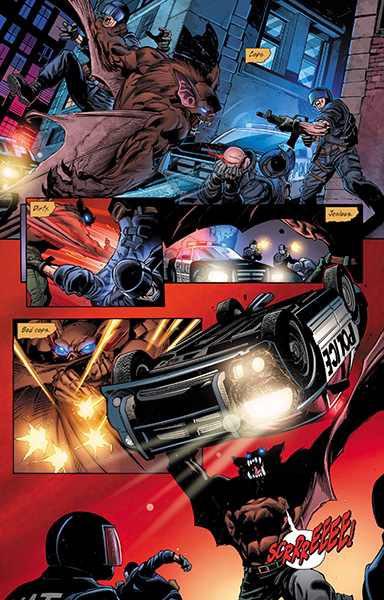 By taking his special formula derived from the glands of bats, Dr. Langstrom's whole body transforms into a half human, half bat hybrid creature. When Langstrom is in his Man-Bat form, he has enhanced strength, agility and endurance. He also grows a pair of leathery bat wings that allow him to fly, has extremely sensitive hearing, and a form of sonar which allows for echolocation. Man-Bat can emit sound waves at a high frequency, and can then hear the echoes they make when they bounce off any objects that are close by, which allows for him to navigate perfectly in total darkness. He can send sonic blasts which stun his victims, and his talons are razor sharp. Over the years, he has learned to communicate with real bats and ask them to do his bidding.

Unfortunately, if Kirk Langstrom is in his Man-Bat form for any kind of extended period of time, he begins to lose control over his more animal nature, and begins to function almost totally on instinct. This potentially makes him a danger to everyone, whether he means intentional harm or not. His hearing is extremely sensitive, and very loud noises can cause him great pain. Man-Bat is also extremely sensitive to any bright light, and chooses instead to stay in dark places. After many years Langstrom has developed the ability to trigger his transformations at will. 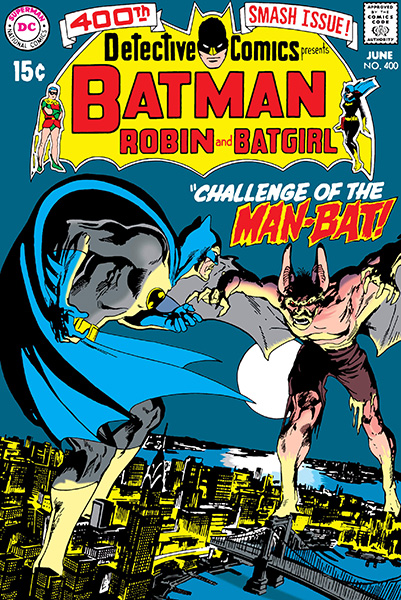 Man-Bat first appeared in this story in the milestone anniversary issue of Detective Comics, where we learn his origin story, and see how Dr. Langstrom injected himself with his own formula, becoming Man-Bat. When a group of high tech thieves called the Blackout Gang attempt to rob the Gotham Natural History Museum, both Man-Bat and Batman attempt to stop them. Batman believes Man-Bat's appearance is a disguise, but isn't sure if he's a new ally, or an enemy. 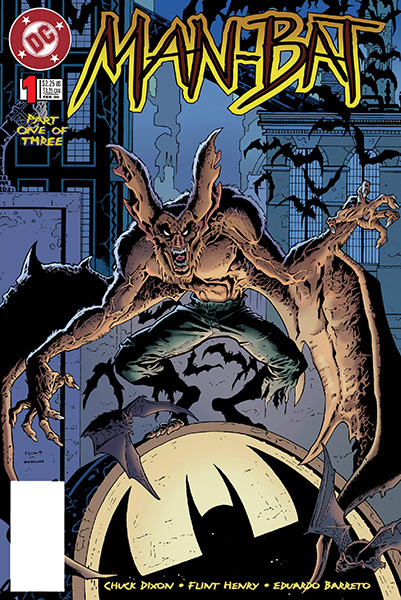 In the first issue of his own very short-lived series, Man-Bat finds out that his wife Francine has been transforming into the She-Bat again and murdering people, all while under the mental control of a sorcerer named Baron Tyme. When Batman finds out, he suspects it must be Langstrom again, and goes after him. But after explaining the situation, and with some help from the Dark Knight, Langstrom is able to free his wife from the wizard's thrall. 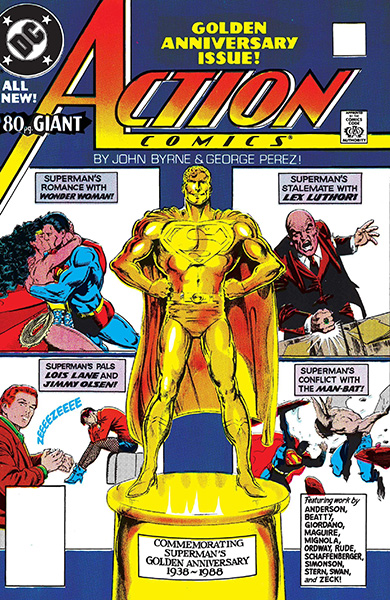 In one of Kirk Langstrom's more lucid moments, he assists Superman in a time of need. Superman's pal Jimmy Olsen unknowingly puts Superman into a cave to protect him from Kryptonite radiation that had reached Earth, and could drive Kal-El mad. Jimmy doesn't realize is home to Man-Bat. Despite wanting to be left alone, he helps Superman come back to reality before he harms anyone by accident. 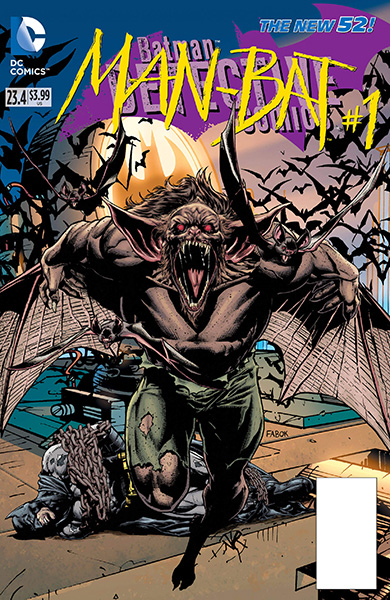 Talia al Ghul, daughter of criminal mastermind Ra's al Ghul, forces Dr. Langstrom into turning over his serum to her, forcing him to comply by keeping his kidnapped wife Francine as a bargaining chip. Langstrom hand over the formula, and with this new weapon, she is able to transform several of the deadly warrior in her League of Assassins into her own personal army of Bat-Men. 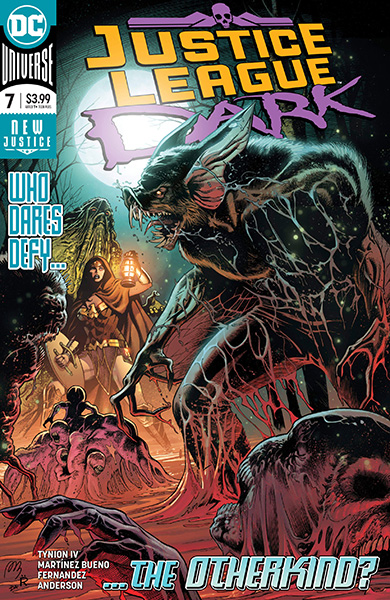 Following the events of 2011's FLASHPOINT, Kirk Langstrom is still the creator of the Man-Bat formula, but does not test it out on himself first. Instead, a villain steals the formula from Langstrom, and infects a large part of Gotham City with it, transforming them into bat people. Langstrom then creates an anti-body for this virus, but must inject himself with it for it to work, saving many lives, but leaving Langstrom as Gotham's only Man-Bat creature.