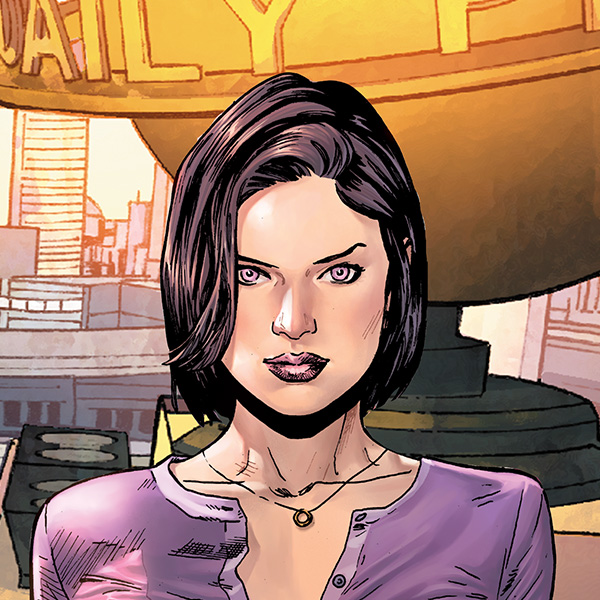 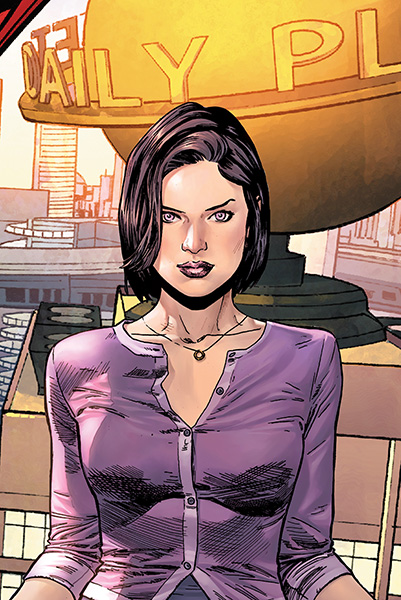 Lois Lane's career spans more than eight decades -- as the world's most celebrated journalist, the mother of Superboy, and the wife of Superman.

Lois Lane's career spans more than eight decades -- as the world's most celebrated journalist, the mother of Superboy, and the wife of Superman.

They say behind every great man is an equally great woman. So it’s fitting that Superman, the World’s Greatest Super Hero, has had the support of Lois Lane since he first appeared way back in 1938. But as the world’s most famous news reporter, Lois is every bit a hero in her own right. From her earliest years as a love interest and damsel-in-distress for the Man of Steel through her evolution into a fearless social crusader, Lois has become synonymous with everything Superman himself stands for: truth, justice, and the American way.

A Pulitzer Prize-winning reporter for Metropolis’s Daily Planet, Lois takes her work uncovering the truth very seriously. So seriously, in fact, that it’s had the unfortunate side effect of putting her in danger more than a few times. Luckily, even before they were romantically involved, Superman has always been there to catch her when she falls.

Over the years, Lois has worn many hats besides that of journalist. She's been a wife and mother, a costumed vigilante, a ghostwriter, and a political activist. Making her a Superwoman in fact as well as name. 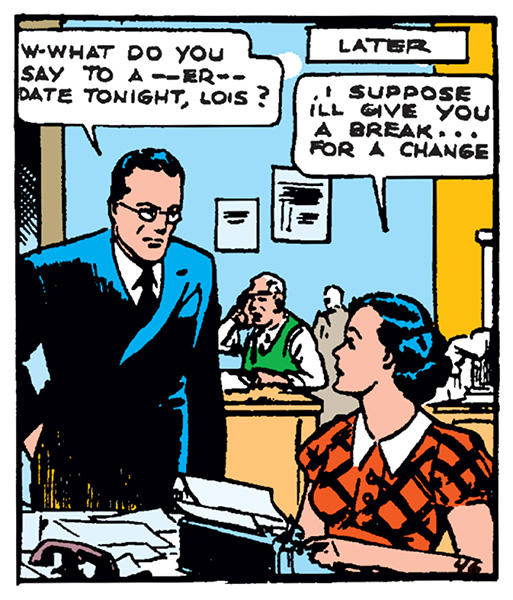 From childhood, Lois Lane knew she was going to be the best reporter in the business. The daughter of a career Army officer, Sam Lane, Lois spent her early years traveling with her family (including her sister Lucy, whom she helped raise after their mother’s death) from military base to military base. She honed her craft at every turn, and when the Lane family moved to Metropolis, Lois got her big break.

At just 15 years old, Lois Lane approached Daily Planet editor Perry White and asked him for a job, trying to bluff her way into a position by telling Perry she was actually 19. Not one to be fooled, Perry declined her resume – but the rejection only spurred Lois further. Determined to prove her worth, she launched a one-woman campaign to infiltrate LexCorp and steal information that would help her get a scoop on Lex Luthor to present to Perry.

She was, unfortunately, caught in the act. But Perry was so impressed with her initiative and her fearlessness, he agreed to hire her.

Years later, Lois's career took off when she won the Pulitzer Prize for her piece on the day she met Superman; after he saved her and her colleagues from crashing in an experimental aircraft. She became one of the first people to ever see Superman in action, and the first person to give him his name – in her headline "MYSTERIOUS SUPERMAN SAVES SPACE PLANE." 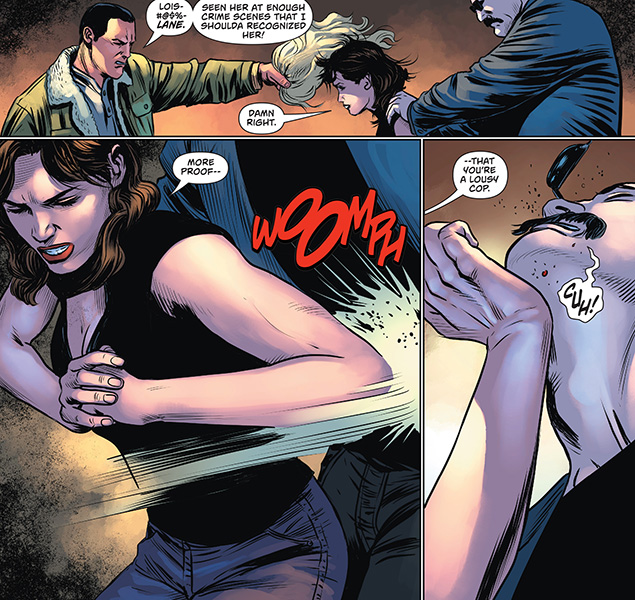 Lois has no metahuman abilities, but relies on her keen wit and intellect, along with military training in unarmed combat (which she received from her father). She’s a world-renowned, award-winning journalist and an uncompromising activist known for putting herself on the line to get a story. 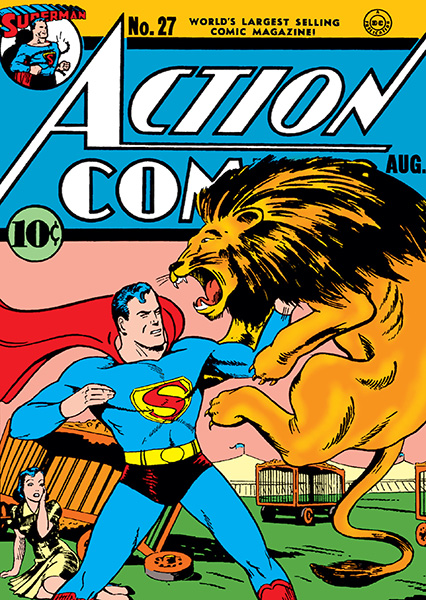 One of the first heroines in comic books, Lois had no shortage of stories in the Golden and Silver Ages of comics. From the 1930s to the 1960s, Lois existed as a career-minded reporter who was the on-again-off-again girlfriend of Superman and occasional professional rival of mild-mannered Clark Kent. In these stories, Lois was, more often than not, thrust into some sort of danger so the Superman could save her.

Alternate versions of Lois and Clark were created in the early 1960s. They lived on Earth-Two, along with the rest of the Golden Age Super Heroes. There, the two were officially married. Back on Earth-Prime, however, Lois continued to oscillate between wanting to be with Superman and wanting nothing to do with him. Occasionally, she and Clark were married in various "imaginary stories," but each time the marriage was revealed to be a trick or a dream and otherwise annulled.

In 1958, Lois proved popular enough to earn her own solo ongoing title, SUPERMAN's GIRL FRIEND, which emphasized the love triangle between Clark, Lois, and Superman.

The Modern Age Lois Lane was introduced in 1986’s THE MAN OF STEEL limited series, a retelling of Superman's origin story. Departing from her Silver Age portrayal, Lois became a tough-as-nails reporter who very rarely needed help, much less for a super hero to swoop in and save her.

During this time, Clark and Lois’s relationship evolved, and Clark eventually proposed marriage after revealing his secret identity to her (in 1991’s ACTION COMICS #662). But before they could wed, Superman was killed by the alien monster Doomsday (in 1993’s “The Death of Superman” storyline).

Lois and Clark pursued a life together, even adopting a Kryptonian son they named Chris Kent, who was revealed to be the son of General Zod. Despite his ancestry, Chris inspired Lois' maternal side, and she was devastated when he eventually sacrificed himself to seal the Phantom Zone and save Earth from Zod and his followers.

Following the events of 2011’s FLASHPOINT, much of DC history was reimagined, including Lois and her relationship with Clark. No longer married or romantically involved, Lois became one of Clark's staunchest allies and civilian friends. She retained her job as a reporter for the Daily Planet, but lost all prior knowledge that Clark Kent was in fact Superman.

Following an attack on Earth by Brainiac, Lois was given psychic abilities that allowed her to fight alongside Superman to stop the invasion. Unfortunately, the use of these powers caused her to lapse into a coma almost immediately after the battle was won. When she awoke, she was powerless and had no memory of anything she learned as a psychic (SUPERMAN #27, 2014).

Later, during the cosmic events of 2015’s CONVERGENCE, a version of Lois more reminiscent of the pre-FLASHPOINT continuity was introduced. This version of Lois was still married to Clark. The two welcomed a baby boy, Jon Kent, into the world during the crisis. 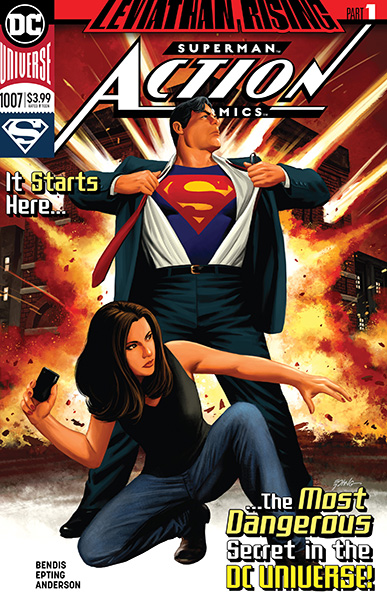 Following 2016’s DC UNIVERSE: REBIRTH #1, the version of Lois seen in CONVERGENCE was left in the prime DC universe where she, along with Clark and their son, lived in secret using the surname "White,” while the other Clark and Lois lived their lives in Metropolis.

This scenario, however, was torn apart following the "death" of the acting Superman and subsequent temporary empowerment of that version of Lois (SUPERWOMAN #1, 2016). Lois Lane briefly became Superwoman while Lois White wrote in secret under the pseudonym “Author X.” When Lois Lane's Superwoman powers finally overwhelmed and killed her, Lois and Clark White stepped out of the shadows and into the public eye once more.

Later, during 2017’s “Superman Reborn” story arc, a scheme by Superman’s old enemy Mr. Mxyzptlk resulted in a new collision of universes, causing the histories of both the Lane family of the New 52 and the White family of CONVERGENCE to merge into one solid timeline. This resulted in Lois returning to her job as a reporter at the Daily Planet.