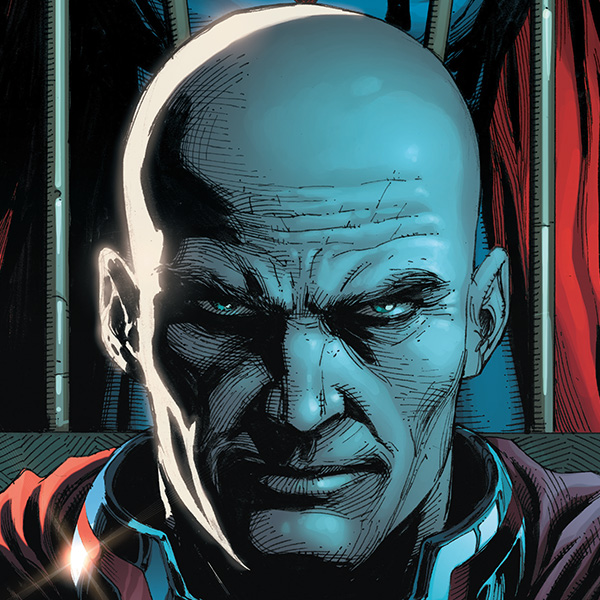 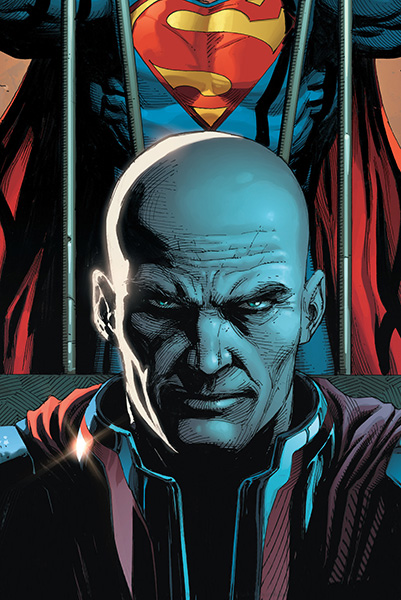 He’s the most intelligent man on Earth. But Lex Luthor has only ever used his brilliant mind for selfish gain, and to further his own bitter vendetta against those he feels have done him wrong. A notorious sociopath and xenophobe in almost every one of his incarnations—be it scientist, businessman or even the President of the United States—Luthor always uses his power and influence not to help mankind, but to attempt to destroy the one man on the planet who makes him feel insignificant: Superman.

Although he has no superpowers to speak of, Luthor has come closer to defeating the Man of Steel more times than any of his other adversaries. Due to his brilliant mind, his schemes nearly always come close to vanquishing Superman, until his massive ego gets in his way. No matter the situation, Luthor’s hubris is always his downfall.

To much of the world, he’s a respectable, self-made man, the pinnacle of human achievement, due to his massive wealth and standing in the worlds of business and politics. But to Superman and the other Super Heroes of the Justice League, he’s the most dangerous man alive, and the one DC Super-Villain who is never to be underestimated.

Originally, on what would later be designated Earth-2, Alexei Luthor was a scientific genius who would use his intellect and scientific knowledge on various bids for world domination. But from the very beginning, the Man of Steel was always there to thwart his plans. Although he first appeared sporting bright red hair, it wasn’t long before Luthor was only seen with his famous bald head. 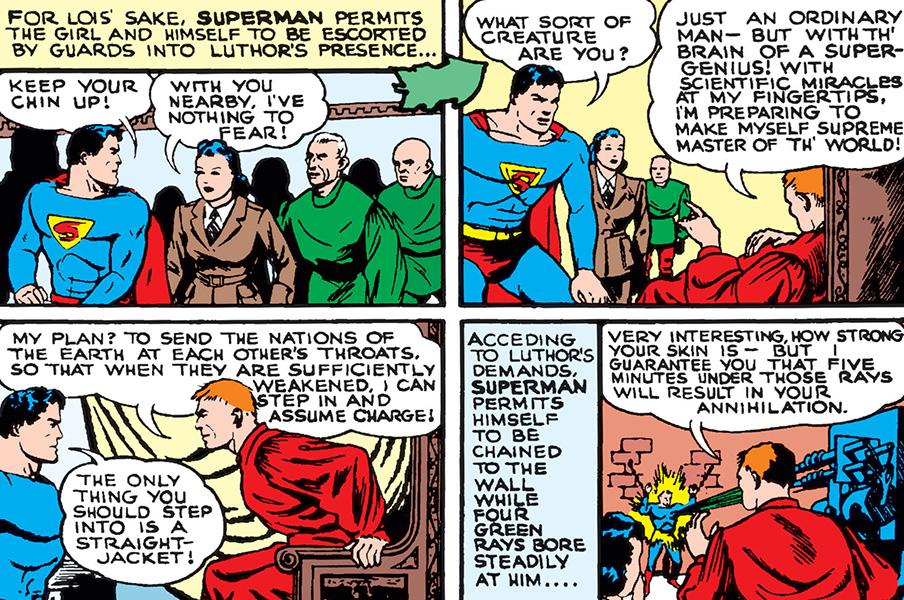 Alexei Luthor made several appearances throughout the 1940s, and in later decades would even team up with his counterpart from Earth-1. During the Crisis on Infinite Earths, when the evil android Brainiac gathered all the known Super-Villains from across the Multiverse, he chose the Lex Luthor from Earth-1 as his partner. When Alexei Luthor openly scoffed at this choice, claiming the need for “only one Luthor,” Brainiac agreed with his assessment—and disintegrated him, leaving only the Luthor from Earth-1. Soon after the Crisis, Alexei Luthor was erased from history.

The Lex Luthor of Earth-1 had a bitter history with Superman going back to their youth together in Smallville, Kansas. Lex was actually Superboy’s biggest fan and would often use his genius to help out the Boy of Steel on his missions. But one fateful day, Luthor’s experiments to find an antidote for Kryptonite accidentally led to a fire in his laboratory. Superboy put the fire out with his super-breath, but also accidentally blew away all of Luthor’s hair. The chemicals released into the air prevented his hair from ever growing back. 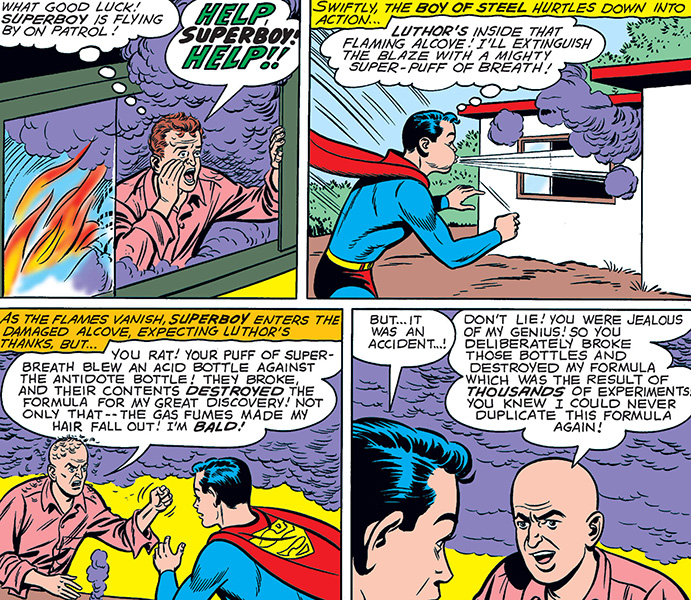 Luthor blamed Superboy for what he considered his “disfigurement,” and spent the rest of his life hating him and using his scientific knowledge to destroy him. By the time Superboy became Superman, Luthor was his most notorious foe. Throughout the 1960s Luthor came up with scheme after scheme to defeat his most hated enemy.

During the 1970s Luthor began using his genius to create technology that would help him approximate Superman’s powers and allow him to actually inflict some physical harm upon the Man of Steel. He started wearing a green, purple and black costume sporting miniature jets that allowed him to fly, and wielded other gadgets that could do actual damage to Superman.

In the mid-’80s Luthor received a major power upgrade when he started wearing an alien battlesuit he obtained on the planet Lexor (a distant world he renamed after setting himself up as its ruler). This suit allowed him to fight Superman in hand-to-hand combat for the first time, though the Man of Steel would always find a crack in his armor.

After the Crisis on Infinite Earths, the history of Earth changed, and Luthor was given an entirely different backstory. In this history, Lex was a child who grew up in the slums of Metropolis, who used his smarts to epitomize the self-made man. He climbed up out of the gutters and founded LexCorp, one of the largest, most powerful companies in the world. Although to the world at large Luthor was merely a successful businessman, he often engaged in illegal activities, many of which ended with innocent lives lost. 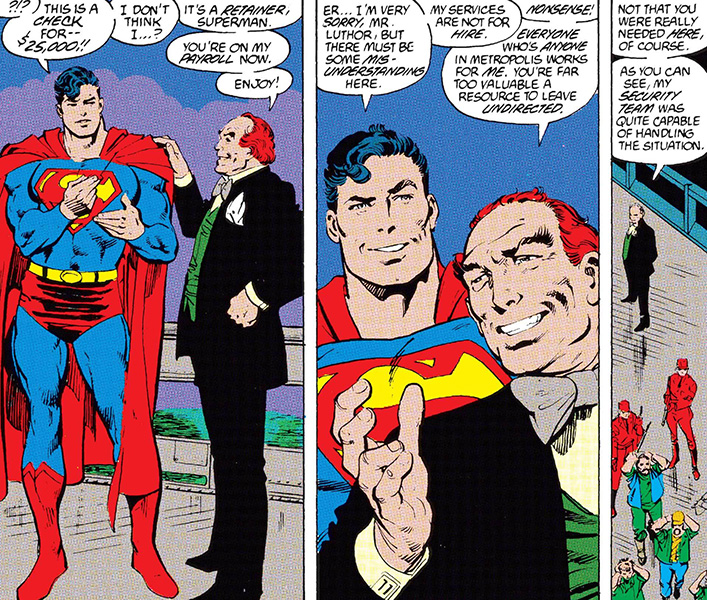 When Superman appeared in Metropolis, Luthor tried to put him on the LexCorp payroll. But when Superman refused to be owned by Luthor, Lex realized his city’s most powerful, beloved citizen was incorruptible. From that point on, Luthor made it his life’s goal to destroy Superman, by any means necessary.

After the second so-called Crisis, Earth’s history was altered yet again. The Silver Age history was combined with the Post-Crisis history, and Luthor and Clark Kent now shared some of their childhood together in Smallville. However, when Luthor moved to Metropolis and became its richest citizen by founding tech company LexCorp, he acted as if he had no idea who Clark Kent was, and disavowed ever having lived in an insignificant small town in the middle of nowhere. Due to various schemes, Lex lost his company and his social standing in the eyes of the public, forever blaming both Superman and reporter Clark Kent.

After the Flashpoint event, reality was altered once more. In this reality, Luthor again had his company LexCorp. His xenophobia and scientific genius caused the U.S. government to recruit him to defeat Superman when he first appeared in Metropolis, as they believed Kal-El was a hostile alien invader. Though the government would come to trust Superman, Luthor never did, and continued doing everything in his power to bring him down, believing it would elevate him in the eyes of the world.

Eventually Luthor appeared to have turned over a new leaf, and even joined the Justice League. He made himself a new suit, approximating Superman’s powers as best he could. Superman, however, never trusted this new and improved Lex, and always kept a wary eye on him. 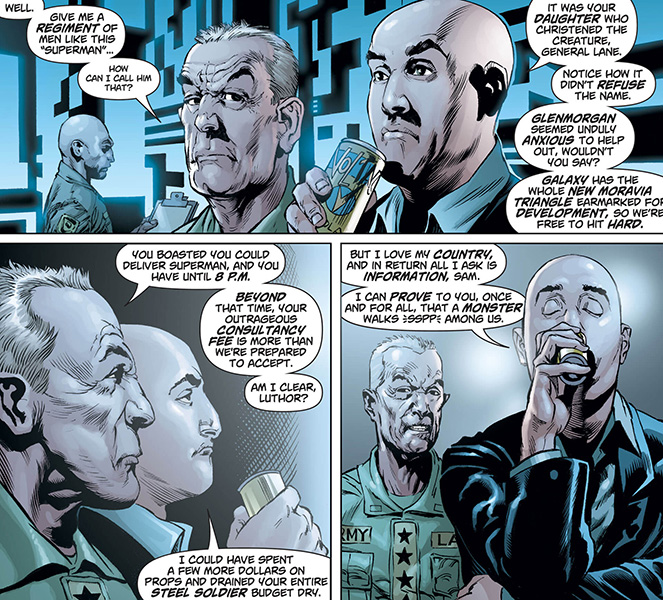 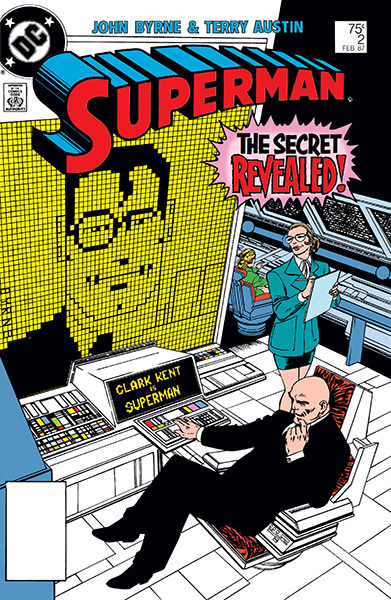 Even with no powers or metahuman abilities, Lex Luthor has one of the most brilliant minds on the planet.

In whatever reality he finds himself in, Luthor is always a scientific genius, displaying vast knowledge in every one of the known sciences. His intelligence level is beyond measure. What changes from one reality to the next is how he uses that genius—openly as a criminal mastermind, or hidden behind the veneer of the noble businessman. Yet he is always a sociopath.

Luthor often says that if he were to set his mind to it, he could solve all of Earth’s problems, from hunger to poverty to war. And all of these problems are ones he’s promised to address—once he destroys Superman. 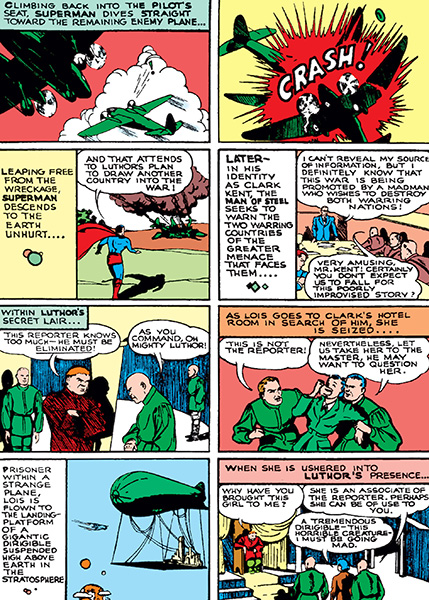 In Lex Luthor’s first appearance, he was a standard-issue “mad scientist,” who used the technology at his disposal to attempt to start a war between two European nations. Clark Kent and Lois Lane were sent to investigate, and Lois ended up getting kidnapped by Luthor. He used a green ray (although not Kryptonite) to fight the Man of Steel, but Superman defeated him soundly. This was the first of many times Luthor would use technology to hold countries ransom or try to set himself up as ruler.

After disappearing from the pages of Superman comics for many years, Luthor returned, and this time his backstory, and the origin of his villainy, were tied into Superman’s boyhood in Smallville. The broken friendship of Luthor and Superman led to a lifetime of schemes to humiliate and later murder Kal-El. During these years we learned that Luthor’s family, including his sister Lena, changed their last name to Thorul to distance themselves from his infamy. 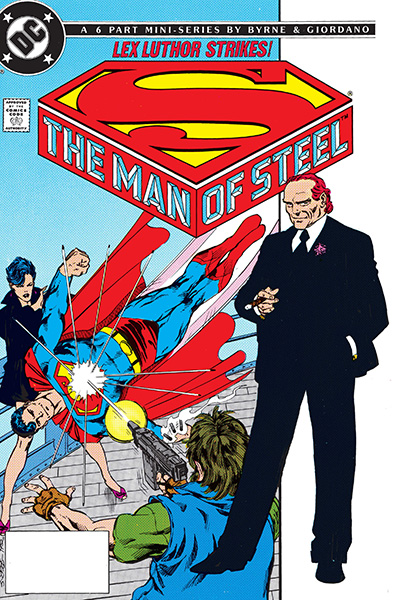 When Luthor was reintroduced post-Crisis for the first time, he was a heavyset, balding man running the mega-conglomerate LexCorp. He essentially owned all of Metropolis. Daily Planet reporters Lois Lane and Clark Kent were invited to a party on Luthor’s yacht, and when terrorists attacked the event, Superman saved the day. Lex attempted to pay the Man of Steel with a personal check, hoping that everyone at the party would believe the new hero was on Luthor’s payroll.

Lex admitted he arranged the attack to see what the Kryptonian could do. The mayor of Metropolis, outraged at the way Luthor put the lives of his guests in danger, deputized Superman and allowed him to arrest Luthor.

Lex Luthor was so paranoid about his enemy that he had a Kryptonite ring fashioned to keep Superman at bay. Although the radiation from Kryptonite was usually harmless to humans, prolonged exposure ended up giving Luthor incurable cancer. Knowing the end was coming, he faked his own death and transferred his mind to a younger, cloned body.

He passed off this clone as his own heretofore-unheard-of son, Lex Luthor II. This second, younger Lex tried to win the hearts of Metropolis and prove to everyone he was not like his “father.” Nevertheless, he was exposed by Lois Lane. In retaliation, he set bombs off all over Metropolis, killing thousands. Luthor’s cloned body then deteriorated to an approximation of his real age.

Luthor then turned himself in to the authorities. During his trial, he concocted a story in which he was kidnapped by renegade scientists, and Lex Luthor II was an impostor made to ruin his family name. He was acquitted, much to the disgust of Lois Lane and the staff of the Daily Planet, who knew the truth. Luthor again took control of LexCorp, but his greatest bid for power was still to come. 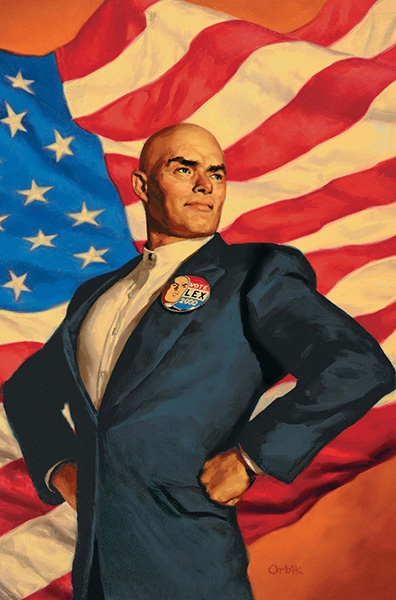 Upon clearing himself, Luthor contributed to many philanthropic causes, earning back the good name he’d destroyed. After helping save Gotham City after a disastrous earthquake, Luthor decided to run for president of the United States. He sought to use his presidential powers to destroy Superman once and for all.

When a giant meteor of pure Kryptonite was discovered headed for Earth, he found a way to blame Superman. But once again, his hubris was his downfall. This time Superman, along with Batman, helped expose Luthor for what he was to the entire world. Despite attempts at explaining away his crimes, Luthor never regained his standing. After losing the presidency, he again ended up in jail.

In the new DC Universe that resulted after the Flashpoint event, Lex Luthor was once again a tech genius, but he also served as a sort of troubleshooter for the U.S. government. When Superman first appeared in this reality, both the U.S. military and the corporate establishment didn’t trust the new alien, despite all the good he did, and Luthor offered his expertise to defeat him. Ultimately, however, he double-crossed General Sam Lane and Glen Glenmorgan, the billionaire who ran Metropolis, exposing their illegal activities. With Glenmorgan out of the way, Luthor and his company LexCorp took control of the city. 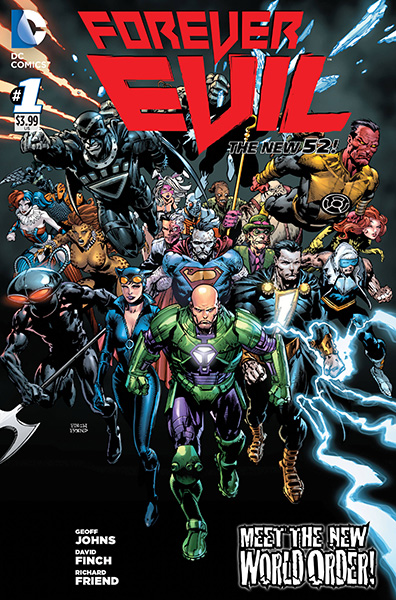 Reluctantly, the League’s members agreed to let him join, although none of them trusted him. During the so-called Darkseid War, Luthor traveled with the League to Apokolips. In the ensuing battle, he absorbed much of the defeated Darkseid’s energy, becoming, for the first time, a powerful metahuman.

Following the events of DC UNIVERSE REBIRTH #1, Lex Luthor returned to Earth from Apokolips, only to find that his enemy Superman had died. Mysteriously, another Superman had appeared on Earth, claiming to be from the previous, post-Crisis, pre-Flashpoint DC Universe.

In honor of the dead Superman, Luthor constructed a power suit for himself and used the fallen Superman’s cape as his own. For a time he protected Metropolis as its second Superman. But the older Superman was never convinced Lex was anything less than a charlatan. Realizing they could never be allies, Lex ripped the S shield off his chest and denounced any truce with the Man of Steel.