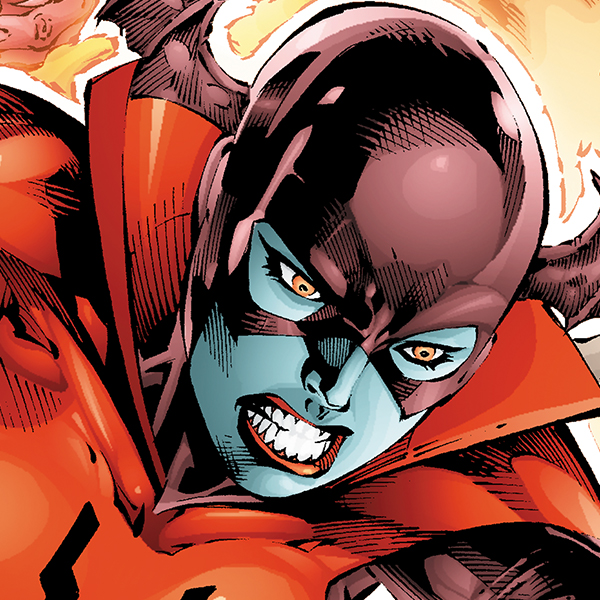 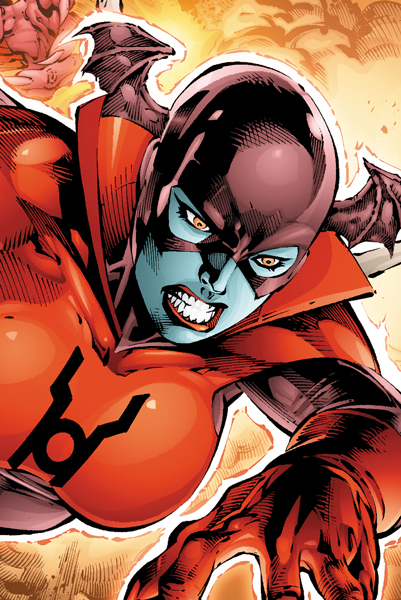 The lethal red right hand of Atrocitus, this once courtly lady’s mission is defined by a rage that has consumed her entire being. But Bleez is always just one revelation away from personal redemption.

The lethal red right hand of Atrocitus, this once courtly lady’s mission is defined by a rage that has consumed her entire being. But Bleez is always just one revelation away from personal redemption.

To receive a power ring as a member of the intergalactic Red Lantern Corps, a brutal requirement must be met: only the more enraged people in the universe have the venom in their blood necessary to wield its awesome power. Of the thousands who comprise the ranks of the Red Lantern leader Atrocitus’s army, one of the most famous is the alluring Lady Bleez, with bone wings at her back and often sporting a fresh, flowing coat of blood upon her skin.

The target of Bleez’s rage was originally the similarly ominous Sinestro Corps, formed by Thaal Sinestro to terrorize the universe into order. In times nearly forgotten, Bleez was a courtly lady with elegant feathered wings, one of the most beautiful and eligibly single noblewomen of the paradise planet of Havania. Though suitors asked for her night and day, not a one met her standards for marriage. This went on until two rejected paramours, brimming with frustration for her independence in turning them down, spread vindictive tales of her beauty to the Sinestro Corps. The Corps visited her homeworld, massacred her family, and visited unspeakable tortures upon her, culminating in the removal of her beautiful wings.

The rage which filled Bleez for the loss of her family, the betrayal of her people, and the horrors of the Sinestro Corps twisted her into a prime candidate for the fledgling Red Lantern organization. A red ring, attracted through the universe by her powerful, unfiltered rage, morphed her into a monster incapable of any thoughts but violence and revenge.

The magnitude of Bleez’s rage proved her to be a prime recruit, and she soon found herself by Atrocitus’s side as his most trusted and capable Corps member. When greater threats arose in the universe requiring the Red Lantern Corps to throw in with hated foes and uneasy allies, Bleez would usually be there either by Atrocitus’s side, or as his representative. Bleez proved herself so indispensable to the Red Lantern Corps operation that she was the first to be baptized by Atrocitus in the Blood Ocean of Ysmault, restoring her vocabulary and mental faculties while reducing none of her inner rage. It was Bleez who mentored Kyle Rayner to master the rage within him so that he could master the red light of the emotional spectrum, in his quest to become the White Lantern. It was Bleez who would assume control of the Red Lantern Corps when Atrocitus lost his way. And it was Bleez who, upon the restoration of her memories, returned to her homeworld to exact barbarous vengeance upon the nobles who sold her out -- but the red ring which perpetuated her rage would grant her no peace.

During an operation Atrocitus called the “Red Dawn,” he and Bleez attempted to transform Earth into the new homeworld for the Red Lantern Corps. The duty fell to neophyte Green Lanterns Simon Baz and Jessica Cruz to repel the invasion. In an unprecedented act of willpower, Simon granted Bleez a moment of clarity which allowed her to comprehend the actions she had taken as a Red Lantern, and reconcile with her own past. Though this only lasted for a moment, Bleez left the encounter with new inner insight, and has not been seen since. Who knows where her journey of self-discovery will take her next?