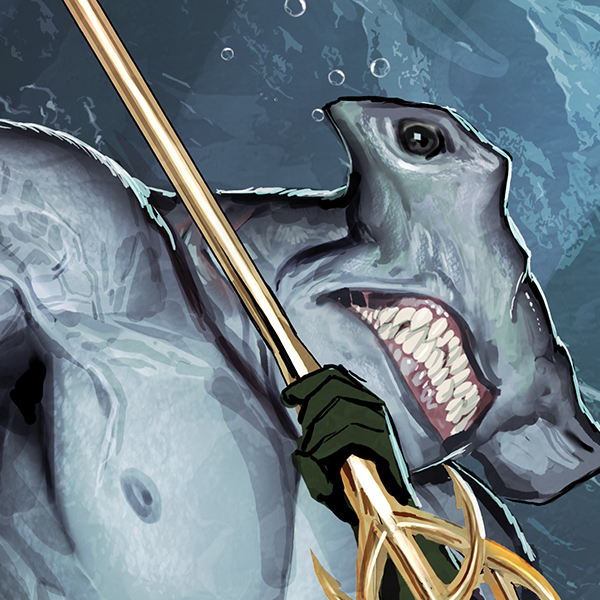 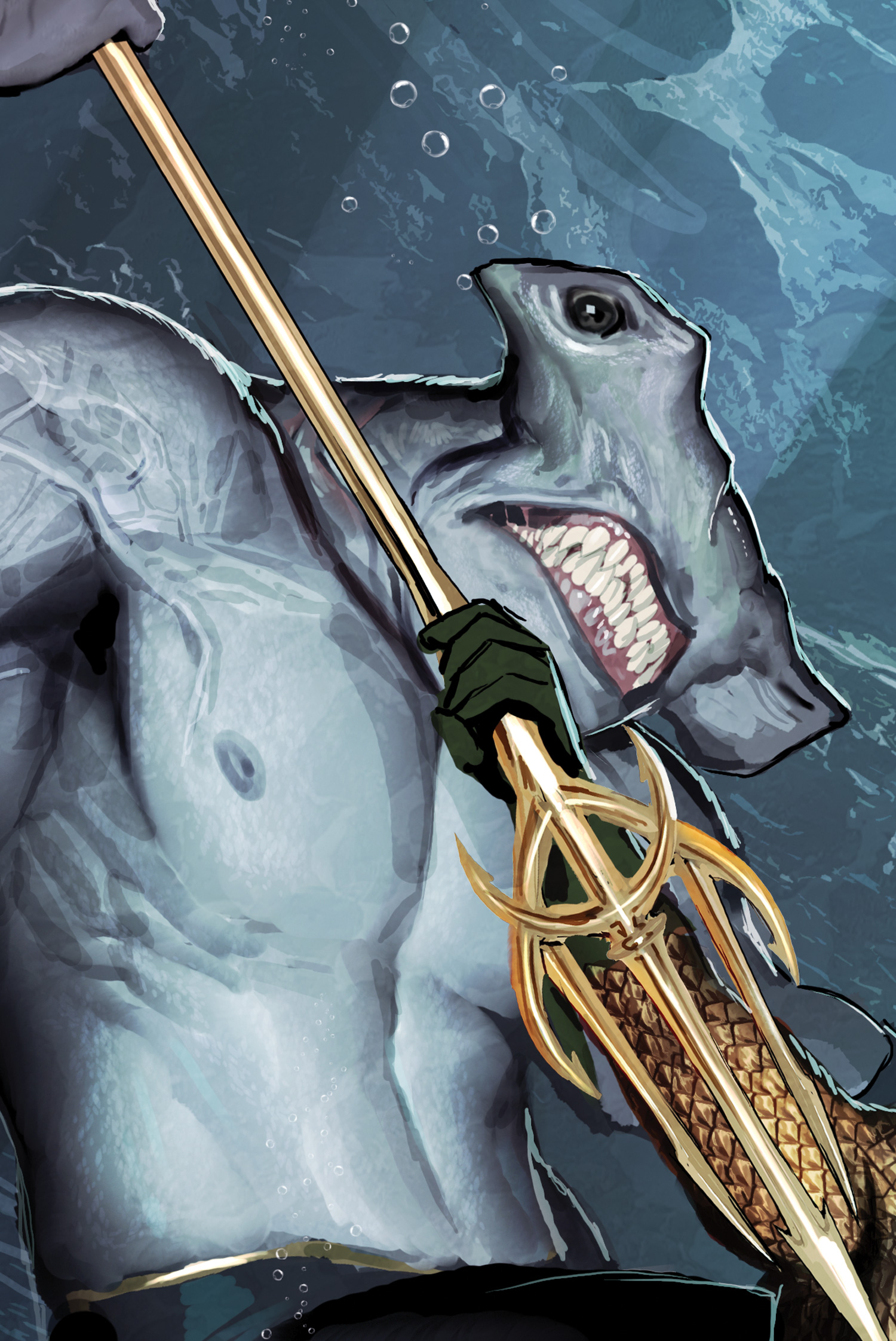 This lowborn son of an ancient shark god was the terror of the Hawaiian seas, before hard time with the Suicide Squad turned him towards a life of maritime crime.

This lowborn son of an ancient shark god was the terror of the Hawaiian seas, before hard time with the Suicide Squad turned him towards a life of maritime crime.

Not to be confused with the mutated Green Lantern enemy “The Shark,” or white-collar Batman villain “Great White Shark,” King Shark was originally an enemy of Superboy — although today, he’s more commonly associated with villain ensembles such as the Secret Six and the Suicide Squad, or as an enemy of Aquaman. The son of a shark deity, Nanaue usually seeks little more than to feed his prodigious appetites. Though since his liberation from the Suicide Squad, he’s set his sights on loftier goals: the criminal underworld of Atlantis.

When King Shark first appeared to menace the people of Hawaii who dared to wade too far into the water, speculations on his origins varied wildly. Some believed he represented a new mutant evolution of shark with humanoid features. Others supposed he was a man who had mutated a shark-like appearance. The truth proved more fantastic than either theory: King Shark’s true identity was Nanaue, the obstinate, prodigal son of the mystical Shark God and a human woman. At first, Nanaue was content to strike terror into Hawaiians, and occasionally feast upon them… but a run-in with a vacationing DC Super Hero would soon make his life much more complicated.

As a shark demigod, King Shark has enough power to make him a formidable enemy to any hero. King Shark exhibits heightened physical strength, speed, durability, and enhanced senses -- including sonar detection and regeneration from even extreme injuries. He also possesses razor-sharp claws and teeth which can easily tear and rend even the strongest of human flesh. Furthermore, King Shark has proven resistant to Aquaman’s telepathy. Naturally, he’s a very good swimmer.

King Shark’s first entanglement with the superhero community came years after he first started leaving blood in Hawaii’s waters. The first person to collar King Shark was a Honolulu-based policeman, Sam Makoa — though he sustained great injuries and nearly lost his life in the process. But King Shark was soon freed from captivity by the Silicon Dragons, Honolulu’s resident tech-based gang of criminals, hoping he’d join their ranks. King Shark was uninterested, and used his window of escape to return to his feeding frenzy. Unfortunately for King Shark, Superboy (the Cadmus Laboratories-grown teenage clone of Superman) had chosen the moment of his escape to set up patrol in Hawaii now that Superman was back in Metropolis. Superboy single-handedly returned King Shark to the police, earning the superhero skeptic Officer Makoa’s begrudging respect.

In an unlikely turn of events, King Shark found himself allied with both Superboy and Makoa when all three were drafted by the Suicide Squad to take down the Silicon Dragons. To keep King Shark in check, an explosive belt was placed around his waist in case he lost his temper. Naturally, when it came time to throw down with the Dragons, that’s exactly what happened. Director Amanda Waller detonated the belt to keep King Shark’s manic attacks against all sides, but it wasn’t enough to stop him. King Shark merely regenerated from the explosive fallout, and swam back into the depths from whence he came.

King Shark resurfaced a few times in the years between his encounter with Superboy and INFINITE CRISIS, but made few significant moves. His next major appearance came in AQUAMAN: SWORD OF ATLANTIS, humbled by a scar given to him by the hook-handed King of Atlantis after he had attacked an Atlantean priest in an attempt to increase his own father’s power. For three years, King Shark was held captive for his crimes by Atlantis’s holy Order of the Thorny Crown — until Aquaman, now reincarnated through the fallout of INFINITE CRISIS as the eldritch and powerful Dweller of the Depths, charged King Shark with a quest of personal redemption: to watch over his heir, Arthur Joseph Curry, a vessel for the lost human portion of Aquaman’s soul. Reluctantly, King Shark followed the Dweller’s commands, formally introducing the former Aquaman to his successor. King Shark persisted in this role for some time, though Arthur Joseph Curry left his post as heir some time before the original Aquaman himself would be reborn in BRIGHTEST DAY.

Weary from the burdens of authority and guardianship, King Shark returned to his simplistic lifestyle, feasting on people and making a modest living by accepting contracts on specific people to eat. This period brought him in opposition with the ragtag mercenary group the Secret Six on multiple occasions, though he eventually joined their gleefully murderous ranks as a member just in time for their ultimate defeat. At the end, King Shark was granted a rematch against his original enemy, Superboy — though it was the interference of Supergirl which proved to be his demise.

The next time King Shark appeared, it was with a sleek new hammerhead design, and once again as an initiate to the Suicide Squad. Though this time, the Squad had refined their punitive measures to an explosive chip in the cranium, removing the possibility for escape. King Shark’s ruthlessness and resilience made him an irreplaceable asset in this incarnation of the Squad for quite some time, with his utility even allowing Waller to overlook his ravenous consumption of the occasional disposable teammate. But when Belle Reve was compromised by the Crime Syndicate of America’s Secret Society of Super-Villains in FOREVER EVIL, King Shark took the opportunity to leave the Suicide Squad behind once more and join their ranks, before returning to the sea upon their defeat.

King Shark resurfaced in the REBIRTH era as an agent of N.E.M.O., the Nautical Enforcement of Macrocosmic Order, a terrorist organization led by Black Manta. King Shark was soundly defeated by the Teen Titans, which at the time included Black Manta’s own son, Jackson Hyde — the current Aqualad.

By this time, King Shark was done playing other people’s games. Nanaue posted up in the lower levels of Atlantis, with the other inhuman members of the kingdom, and leveraged his prodigious experience in the world of super-villainy to carve out his own criminal operation. This would lead to an unlikely alliance with an exiled Aquaman, after the xenophobic tyrant Corum Rath had deposed him from the throne. Reaching a mutual understanding with King Shark that Corum Rath’s defeat would be in their mutual interest, Aquaman teamed up with King Shark and used his resources to end Rath’s coup for the kingdom.

In the subsequent reign of Queen Mera, King Shark would enter an uneasy alliance with the authority of Atlantis, even defending the realm from his former comrades in the Suicide Squad — and doing battle in the process with his replacement on the team, Killer Croc.