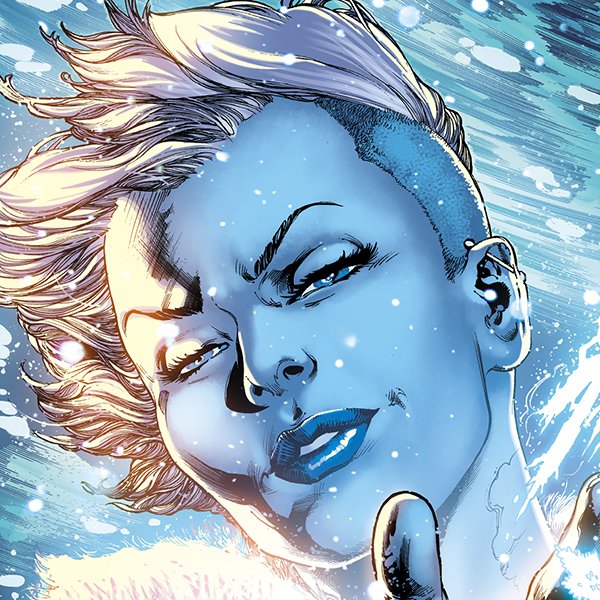 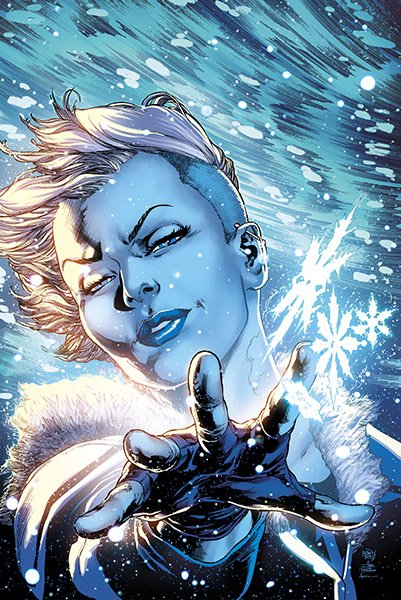 Due to her initial fusion with the ice emitted from a thermodynamic ultraconductor engine, Caitlin Snow has the ability to project various forms of frozen water—including ice and snow—from the tips of her fingers.

Due to her initial fusion with the ice emitted from a thermodynamic ultraconductor engine, Caitlin Snow has the ability to project various forms of frozen water—including ice and snow—from the tips of her fingers.

One of the chilliest characters in the DC Universe, Killer Frost has been a villain, an antihero and a hero. First introduced as Crystal Frost, a former student of Professor Martin Stein, she was an adversary for Firestorm until her death. Shortly thereafter, her friend Dr. Louise Lincoln replicated the experiment that gave Crystal powers, and became the second Killer Frost. With a vendetta against Firestorm, she would fight the nuclear hero for years, on her own and as a member of the Suicide Squad and Injustice League.

After the events of the New 52, a third Killer Frost was introduced in the form of Dr. Caitlin Snow, a scientist at S.T.A.R. Labs. When Snow was attacked by agents of H.I.V.E. in the Arctic, she gained cold powers and used them to help Martin Stein and Steve Trevor rescue the Justice League. In the DC Rebirth, Snow briefly became a member of the Suicide Squad, before Batman asked her to join the Justice League of America. 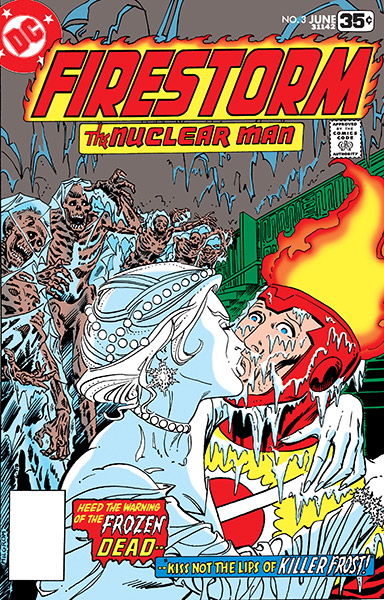 While studying science at Hudson University, Crystal Frost fell in love with her teacher, Martin Stein, although he did not return her feelings. Upset by the rejection, Frost went to work in the Arctic, and was accidentally locked in a thermafrost chamber, from which she emerged as the Super-Villain Killer Frost. She began a murderous crusade against the men who had wronged her, including Martin Stein and his alter ego, Firestorm.

A colleague of Crystal Frost, Dr. Louise Lincoln decided to repeat the experiment that transformed her friend into Killer Frost, eventually making her the second incarnation of the villainous character. Lincoln launched her own vendetta against Firestorm, whom she blamed for Crystal’s death.

After the death of the chief scientist of a S.T.A.R. Labs Arctic outpost, Dr. Caitlin Snow was sent to finish his work. She soon discovered that the outpost had been infiltrated by H.I.V.E. agents. When they tried to kill her inside the outpost’s thermodynamic ultraconductor engine room, she tried to escape via the coolant system, but her body merged with the surrounding ice. The accident transformed Caitlin into Killer Frost, who is plagued by a thirst that can only be slaked by absorbing the heat of another human being.

Due to her initial fusion with the ice emitted from a thermodynamic ultraconductor engine, Caitlin Snow has the ability to project various forms of frozen water—including ice and snow—from the tips of her fingers. Her power is limited, however, in that she must feed off of the heat generated by living things in order to replenish it. 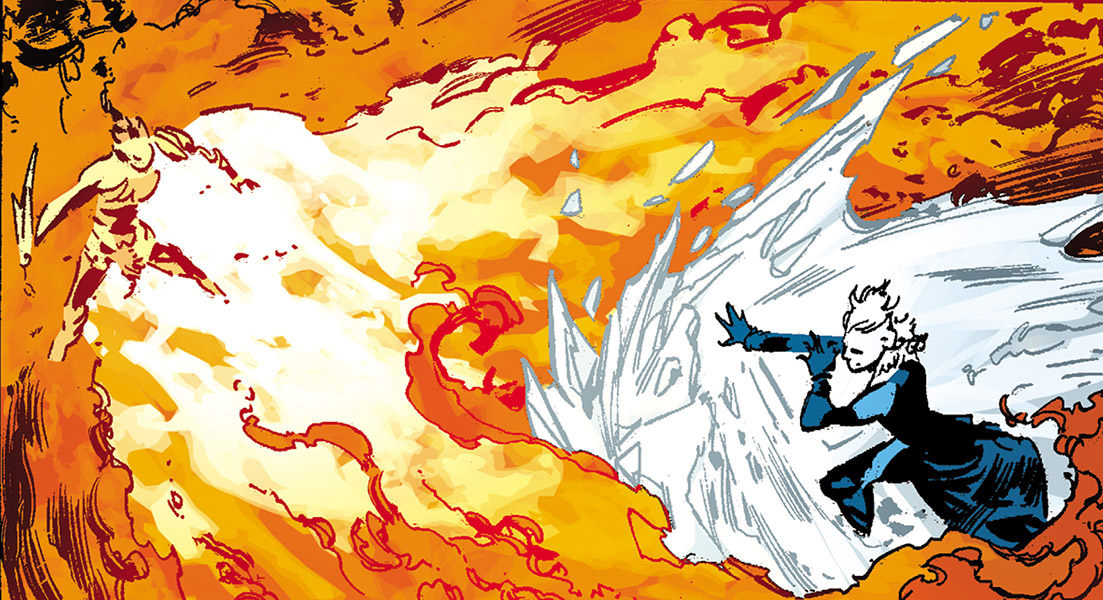 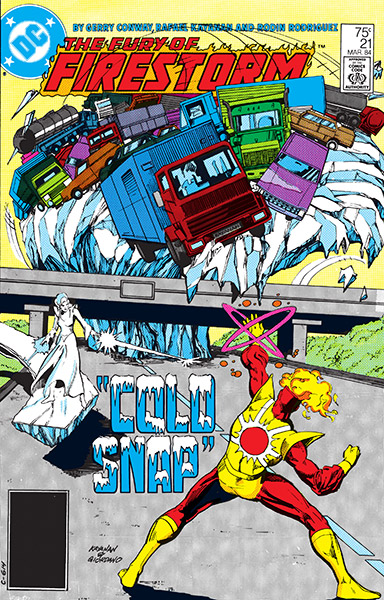 After gaining the powers of Killer Frost, Crystal’s first mission was to kill her former love, Martin Stein, whom she blamed for her transformation. But by this point Stein was one half of the Super Hero Firestorm and defeated her. After a brief membership in the Secret Society of Super-Villains, Frost consulted with her old college friend Dr. Louise Lincoln. Louise ran some tests and discovered that Crystal’s powers were killing her and that she had only hours to live. In THE FURY OF FIRESTORM #21 (1984), an enraged Killer Frost began terrorizing civilians on the George Washington Bridge and fought Firestorm. With Frost’s body aging rapidly from her disease, Firestorm realized that the only way to save her was to let her absorb the nuclear heat from his body. But when Killer Frost kissed Firestorm to absorb his energy, she was consumed by the resulting atomic explosion.

Following her christening as the second Killer Frost, Louise Lincoln blamed Firestorm for the death of her friend Crystal Frost. After several battles with Firestorm and the Justice League of America, she became a member of the Suicide Squad in THE FURY OF FIRESTORM #64 (1987), before being asked by Lex Luthor to join his new Injustice League.

This 1995 miniseries revolved around a new ruler of Hell, Neron, offering several Super Heroes and Super-Villains their greatest desires in exchange for their souls. Louise Lincoln was given greater cold powers by the demon. She then attacked Hawaii, freezing several of the islands before she was stopped by Superboy and Knockout.

In the 2003 SUPERMAN/BATMAN story arc “Public Enemies,” U.S. President Lex Luthor declared Superman and Batman enemies of the state, and offered a one-billion-dollar reward to anyone who could bring them to justice. Killer Frost joined a team of cold-based villains to take down the heroes, partnering with Captain Cold, Mr. Freeze and Icicle. But it was later revealed in SUPERMAN/BATMAN #3 (2003) that “Team Ice” was mind-controlled by Gorilla Grodd. 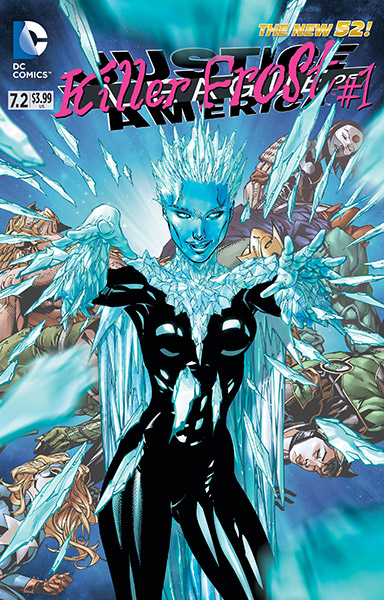 The New 52 saw a new Killer Frost in the form of Dr. Caitlin Snow, a former scientist at S.T.A.R. Labs. After she was transformed into the ice-cold villain in the Arctic, she was plagued with a disease that forced her to purge heat from others so she could survive. After meeting Firestorm, she realized his powers could temporarily heal her mutation. So she tried to re-create the Firestorm Nuclear Matrix many times, to no avail. After tracking down Martin Stein during the events of FOREVER EVIL (2013-2014), she encountered Steve Trevor and helped him rescue the Justice League, the members of which were thought to be dead after the Crime Syndicate’s takeover of Earth. But the League was revealed to have been trapped inside the Firestorm Matrix.

In Rebirth, Killer Frost was taken to Belle Reve Penitentiary, where Amanda Waller offered her membership in the Suicide Squad, alongside Deadshot, Harley Quinn and Captain Boomerang. In JUSTICE LEAGUE VS. SUICIDE SQUAD (2016), Snow fought with the Squad against the League, before the two groups joined forces to defeat Maxwell Lord’s original Suicide Squad. Batman asked Snow to join a new Justice League team in JUSTICE LEAGUE OF AMERICA: REBIRTH #1 (2017), one that included the Atom, Lobo, Black Canary, Vixen and the Ray.