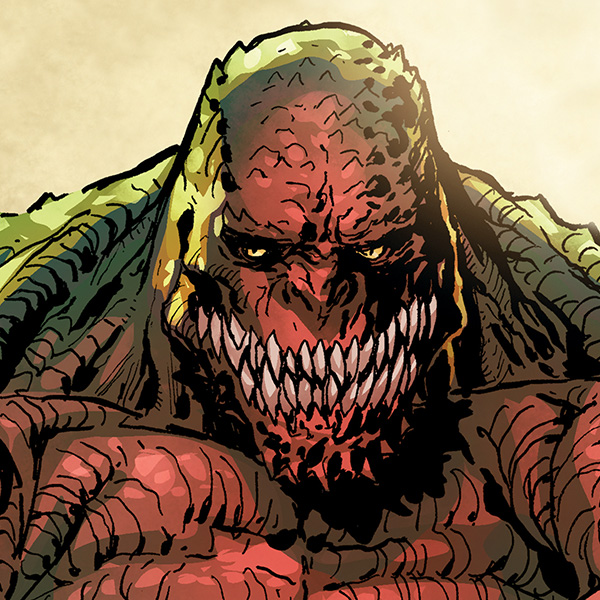 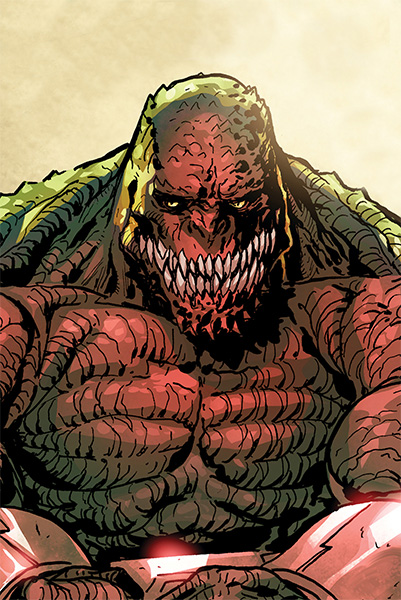 Part man, part reptile, Killer Croc has swam his way out of the sewers of Gotham City into the ranks of the Suicide Squad.

Part man, part reptile, Killer Croc has swam his way out of the sewers of Gotham City into the ranks of the Suicide Squad.

The Majority of Batman's primary rogue's gallery are mentally deranged killers, or diabolically smart criminal masterminds. But most are generally human. But one stands apart – the freak of nature known as Killer Croc. Born as Waylon Jones, Croc had a rare genetic condition which gave him a crocodilian appearance. Raised by an abusive aunt who mocked his deformity, he eventually ran away and joined the circus, becoming a sideshow carnival attraction, where patrons could come and gawk at the freakish strongman called "Killer Croc." He eventually departed for Gotham City, where he began a life of crime, one which brought him into conflict with the Dark Knight.

Although he began as just a man with crocodile-like skin, over the years, Killer Croc's appearance has grown more and more inhuman. He now has a more bestial form, complete with a truly reptilian head, razor sharp claws and teeth, and he even has a tail. His animal nature has made him a formidable foe, but his limited intellect has kept him from ever truly achieving his true potential. Nevertheless, his brute strength and killer instincts have made him an ever present thorn in the side of Batman, who must ever be vigilant that the deadly Croc will once again emerge from the sewers below to wreak havoc on Gotham City. 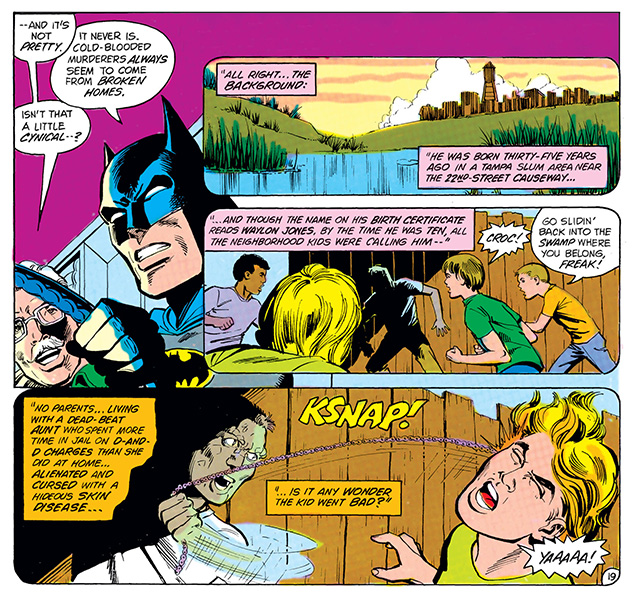 Waylon Jones was born in a poor section of Tampa, Florida, to a mother who died in childbirth, and a father who abandoned him. He arrived in the world with a condition which resembled epidermolytic hyperkeratosis, which was a serious skin disorder that had him covered in scales. It was later revealed that what Jones actually had was a form of regressive atavism, which meant that he'd inherited traits of ancestral species of humanity like reptiles. His inherited condition was then greatly amplified by being born with the metagene. So in addition to his physical deformity, he had great strength and endurance as well.

But Jones was not raised in a loving home, having been taken in by his aunt, who was an abusive alcoholic who resented having to care for him. Fleeing from his abusive environment after murdering his aunt in a fit of rage, he found work as an alligator wrestler in a sideshow carnival with the nickname Killer Croc. Tired of being gawked at and mocked by the carnival patrons, he then ran off to Gotham City, to begin a life of crime. He quickly rose to the status of one of Gotham's premiere criminal bosses, an astonishing achievement given that Croc was never very smart, and actually had below average intelligence. He eventually crossed paths with the Batman, and when he ultimately defeated Croc, he was soon placed in Arkham Asylum. But this encounter began a long simmering animosity for the Caped Crusader.

Like most of Batman's most notorious adversaries however, Croc would escape from Arkham again and again, and always, he'd be defeated and be sent back, even more humiliated. Each time this happened, he became more angry and monstrous, with his actions matching his appearance, and he went on several murderous crime sprees. Like the crocodiles of urban legend, he eventually found a home in the sewers of Gotham City. In addition to becoming an enemy of the Batman, Croc also found himself at odds with the criminal mastermind named Bane, who once broke both of his arms as a way of demonstrating his strength. For a time, he lived in the bayous of Louisiana with the elemental known as the Swamp Thing.

Eventually, Croc returns to Gotham and is infected with a powerful virus by the villain called Hush, one that substantially increased the rate of his devolution, making him even more reptilian in nature. His head now looked like a real crocodile's, and he developed a tail as well. His strength increased along with his body mass, and his already limited intelligence decreased, making him more of an animal than ever before. His original appearance and level of intellect would eventually return, but he would always struggle with his more animalistic side emerging again from then on.

In the post-Flashpoint reality, Croc actually had a far more tender side, and wasn't always a brutal animal, although he was still a criminal. Once, he fought Arsenal, a.k.a. Roy Harper, and eventually noticed that Roy wasn't fighting back. Realizing he was trying to commit assisted suicide, he comforted him instead of fighting him, and Croc actually became Roy's sponsor for his alcohol addiction. Later, when the Crime Syndicate took over the world, Croc took in many refugees from their tyrannical reign, and brought them into the sewers, where he became the leader of a group of survivors. Eventually, Croc was apprehended and taken in by Amanda Waller, and took a deal to become a part of the Suicide Squad. He developed feeling for his teammate, June Moon, also known as the Enchantress, and she returned those feelings.

Because of Croc's regressive atavism, he possesses scales, razor sharp talons and teeth, both of which can tear through wood and even metal. Croc's skin has become hardened in such a way that it has become almost totally impenetrable to regular forms of weaponry, like knives or bullets. Due to his having the metagene, Croc also has a high level of super strength, and is much larger than an ordinary man. Much like real reptiles, he has developed regenerative powers which allow for him to heal and restore his lost limbs and teeth.

He has an enhanced sense of smell, and can track something or someone based on their scent from a great distance. He also has a limited form of super speed, especially in the water. Because of the way he grew up, coupled with his bestial nature, he is known to have extremely violent outbursts, sometimes without any provocation at all. All of these abilities however are often negated due to his low level intellect, something which makes the already insecure Croc feeling even more like a freak and an outcast. However, in the post-Flashpoint reality, Waylon Jones is shown as being far more intelligent than in his earlier incarnation. 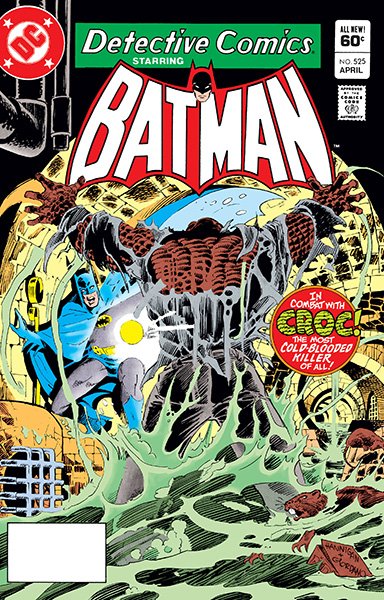 After an encounter with a new villain known as "The Squid," Batman barely escapes with his life. But the Squid turns out to not be the real new threat to worry about in Gotham, as one of his associates, a reptilian-skinned man known simply as Killer Croc, is the real menace. In this first appearance, he takes out the Squid, emerging as a more dominant criminal in the Gotham underworld, and soon, one of Batman's greatest villains.

After already having broken both of his arms by the musclebound criminal known as Bane, Croc is dead set on vengeance. After Bane kidnaps the Tim Drake version of Robin and holds him prisoner in the sewers of Gotham during the KNIGHTFALL saga, he is ambushed by Croc, seeking revenge. The two have a massive brawl which brings down the sewer walls around them, and which leaves them both for dead, although of course both survive and return to plague the city. 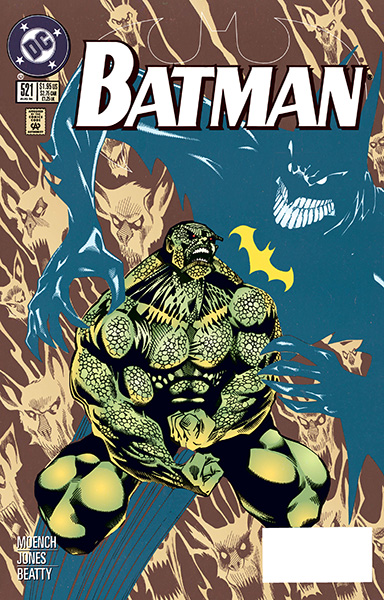 When Killer Croc escapes from Arkham Asylum, he finds that his consciousness is devolving into a more animalistic, primal state of being. When a mysterious force guides him to look for something called the "wet dark," Croc finds himself compelled to go to the Louisiana bayou, where he encounters Swamp Thing. The Elemental being then informs Batman that Croc has devolved into becoming a part of what he calls "the Green," and must remain there with him. 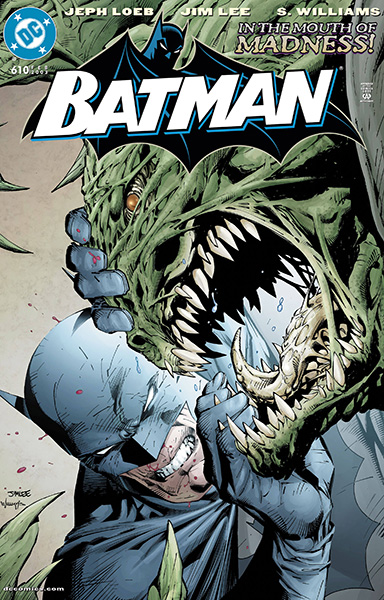 At the beginning of the "Hush" storyline, Batman faces off against Croc, who is more reptilian in appearance than ever before. Having kidnapped a young boy, Batman realizes that kidnapping was never Croc's M.O., and along with his more animal like appearance, realizes someone has been altering and controlling him. It’s revealed that by infecting him with a virus, one which makes him more animal-like, he’s now controlled by someone else: the villain called Hush.

Killer Croc looks for a cure for his more animalistic condition by enlisting Doctor Maria Belleza, who finally manages to create a cure for him. But after injecting Croc with the serum, his body reverts to his more human-like form after just a few minutes. She tries again, but now hungry and enraged, he kills and devours Maria Belleza, fully giving in to his animal side. Although he feels remorse for this act, he knows he is now fully an animal and no longer a man.

Following the events of 2011's FLASHPOINT, much of DC continuity was reimagined. In one of his earliest appearances in the resulting "New 52" universe, we see that Waylon Jones is a kinder version of Croc in this reality. We see Roy Harper/Arsenal's flashback to a time when he fought Killer Croc, who realizes that the young hero is looking for him to kill him in battle, and is barely putting up a fight. Instead of murdering him, he helps him get his life in order. 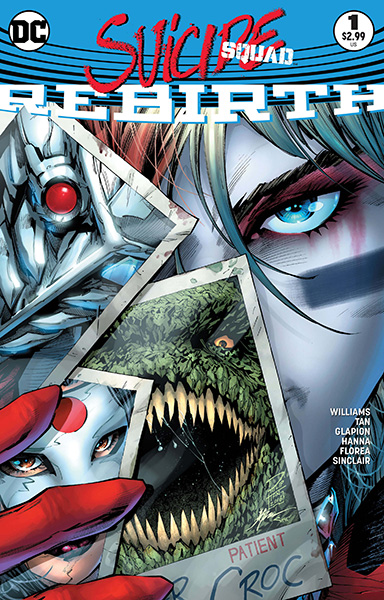 Most recently, Killer Croc was recruited into Amanda Waller's Suicide Squad. On their first mission, Croc and the Squad embark on a mission to bring back a "cosmic item" from a Russian undersea prison, which turns out be a portal to the Phantom Zone. Managing to fight the Kryptonian General Zod together, he forms a deep bond with his fellow Squad member June Moon, the Enchantress.