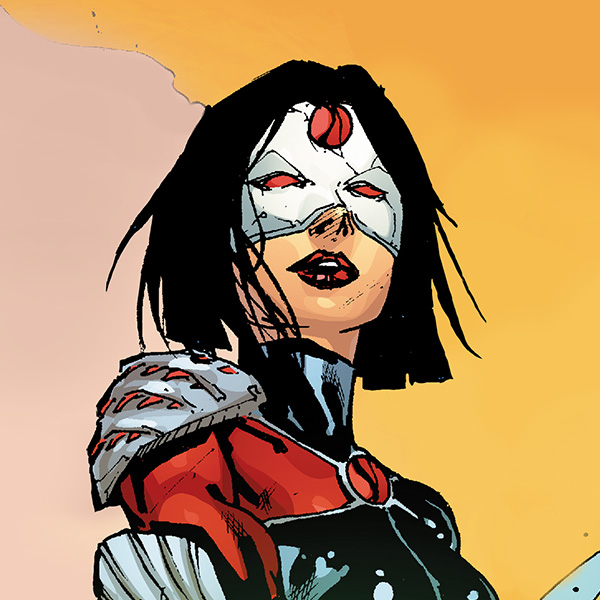 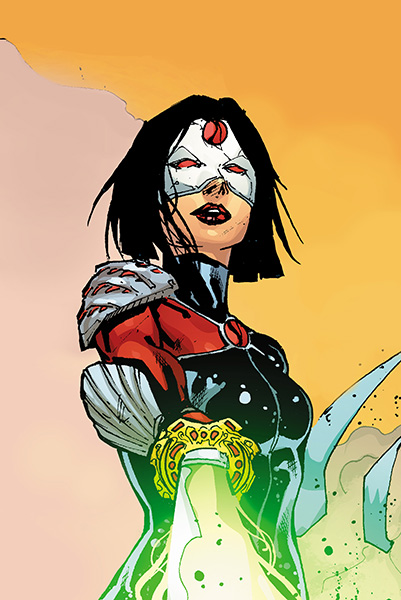 Wielder of the fearsome Soultaker Sword, Tatsu Yamashiro escaped a tragic past to fight alongside the Outsiders and the Suicide Squad.

Wielder of the fearsome Soultaker Sword, Tatsu Yamashiro escaped a tragic past to fight alongside the Outsiders and the Suicide Squad.

While there are many great warriors in the DC universe, there is simply no one more proficient with a sword than the hero known as Katana. Born in Japan and trained in the ways of the Samurai, Tatsu Yamashiro had a wonderful life; a loving husband and two wonderful children. Until one fateful night, it was all taken away from her, when a jealous suitor she once spurned murdered her entire family. Seeking revenge, she took possession of the mystical Soultaker Sword, a legendary blade that housed the spirts of those who lost their lives to it, including Tatsu's husband.

Calling herself Katana, named after the sword she now wielded, Tatsu embarked on a mission to bring to justice those who had harmed the innocent. First finding a home under the guidance of the Batman as a part of his team the Outsiders, Katana eventually served as a part of the Suicide Squad, and later, became a member of the Birds of Prey as well the Justice League of America. Forever marked by the tragedy that created her, Katana is one of the most formidable Super Heroes in the DC universe, and a living weapon of justice that all evildoers should fear. 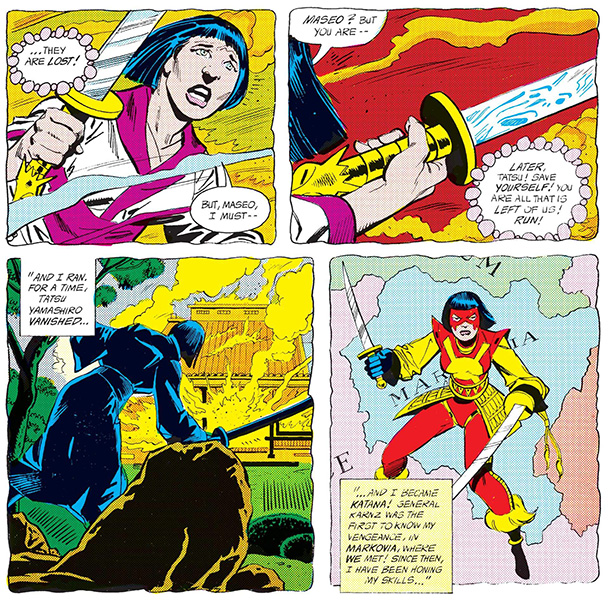 As a young girl growing up in Japan, Tatsu Toro was proficient in the martial arts, and knew how to swing a sword. She caught the eye of two brothers, Maseo and Takeo Yamashiro, who both fell madly in love with her. Although she was fond of both men, she ultimately chose Maseo to marry. This enraged Takeo, who saw this as a betrayal by his brother, and refused to attend his wedding to Tatsu. He joined the Yakuza, and in doing so, was disowned by his family.

Tatsu and Maseo soon started a family of their own, and she gave birth to twins, Yuki and Reiko. As Takeo ros in the ranks of the Yakuza, he began to collect ancient weapons. He was gifted with a pair of matched swords by his boss, General Karnz, one of which he was told had magical powers, and which he later discovered was called the Soultaker Sword. One fateful night, Takeo took both swords to his brother's home, in order to kill him as an act of revenge for marrying Tatsu. He murdered Maseo with the Soultaker sword, but Tatsu later took the sword from him. During the fight, Takeo accidentally started a fire, and Tatsu's children died. Her husband's soul was trapped within the sword however, along with all the other victims the sword had taken over the years. She could hear her husband's voice coming from the blade, and he told her to flee the burning house, as both their children were gone.

Now grieving the loss of her family, and with Soultaker sword in her possession, Tatsu began training as a samurai under the watchful eye of her master, Tadashi. After intense training, she left for the small European kingdom of Markovia, where she tracked down General Karnz, Takeo's boss. She killed him for his part in her family's murder, and soon met several super-powered individuals in Markovia, including their crown prince, Brion Markov (Geo-Force), as well as Black Lightning, Metamorpho, and a young teenage girl named Halo. She took the codename Katana after the sword that she wielded, and joined with these metahumans as the team the Outsiders, under the leadership of Batman. The team then relocated to Gotham City, and later, Los Angeles. There, she became Halo's guardian and mother figure.

Takeo had escaped Justice however, and Tatsu would not rest until she got her vengeance on the man who murdered her family. Takeo travelled to America, where he attacked Tatsu and Halo at their home, and during the battle, he got the upper hand on her, and the two switched swords. He left for Tokyo, and Tatsu followed him. Takeo took the sword to his master, the godfather of the Yakuza, known only as the Oyabun, who performed a magic ritual which conjured the souls that inhabited the sword and gave them corporeal form.

Among them were many warriors and legendary assassins, but also her husband Maseo, who was now a puppet to Oyabun. Katana fought them all, and she was finally able to take back the Soultaker sword from Maseo. Forced to kill her own husband, and lose him all over again, she then finally killed his brother Takeo, finally ending her quest for revenge. Maseo and those killed a second time by the Soultaker passed on to the afterlife, leaving Takeo trapped in the sword in his place.

Over the next several years, the Outsiders disband and reform several times, but Katana is usually a primary member. During the times the Outsiders were defunct, she aided the Suicide Squad, and the Birds of Prey. She also provided assistance to former Outsiders leader Batman on several occasions.  At one point, her old teacher Tadashi sends the world's deadliest assassin, Lady Shiva, to take back Katana's Soultaker sword. Shiva killed Katana with her own sword in a fight, but Katana returned to life after a trial by combat within the sword, in which she had to confront many of the souls of the people she had killed. Later in an act of vengeance, she found Master Tadashi and killed him.

In the post-FLASHPOINT DC Universe, Tatsu's origin story is more or less the same as in the previous timeline. Katana is asked by Black Canary to become part of the Birds of Prey, which she joins alongside Starling and Poison Ivy, who Katana considered to be evil, and therefore not worthy of redemption. The other Birds think that Katana is mentally unstable however, as she often talks to her dead husband, whose soul resided within her sword.

Not long after, Amanda Waller asks Katana to be a member of the government sponsored Justice League of America, as a counterpoint to the regular Justice League's Batman. She joins in the hopes Waller will give her information on her family's killers, and their current whereabouts. She eventually leaves the Justice League, and goes on a quest to find them in Japan. Upon her return, she is appointed the co-leader of the Suicide Squad by Amanda Waller.

She later learns that The Soultaker sword is a totem of the Sword Clan, which has parallels in the Fist, Mask, Shield, Axe, Arrow, and Spear Clans, while on an adventure with Oliver Queen, the Green Arrow. Representatives from each of these clans make up the Outsiders, and Katana becomes a part of this version of the team, just as she had been part of Batman's Outsiders in the previous timeline. Katana also fights various different crime families in San Francisco’s Japantown. 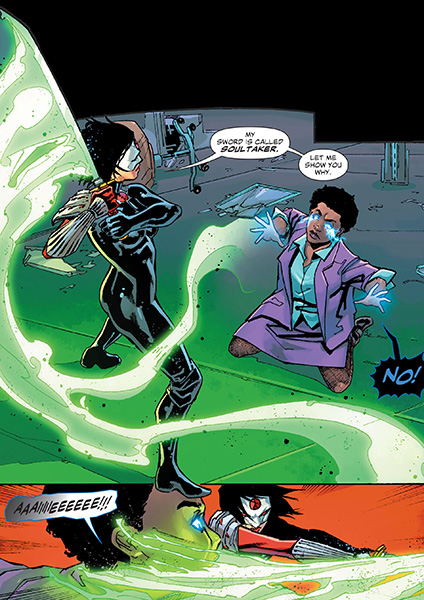 Katana exhibits superior martial arts and also swordsmanship skills, dating back to her Samurai training as a child under the mentorship of her master, Tadashi. In addition to her incredible skills with a sword and with several different forms of hand to hand fighting, she also has great marksmanship, and is an expert with a bow and arrow and a shuriken. In addition, she is proficient acrobat as well. Thanks to the Samurai training and her incredible tactical mind, she is a great trainer for those who have powers, like her foster daughter Halo, thanks to the rigid self-discipline she teaches them to use.

Katana's main weapon of choice is the Soultaker sword, which has many mystical properties, including being almost indestructible, and being able to slice though almost any known materials. The sword also contains the souls of every person ever killed by it. As its owner, Katana can summon the souls that are within the sword to manifest on the blade and speak to her, although whether they choose to help her is always up to them. Katana can also physically manifest these souls in the real world, and even command them to do her bidding. In addition to being an expert in wielding the Soultaker sword, Katana has other armaments at her disposal, like shurikens, a dagger, and other projectile weapons. 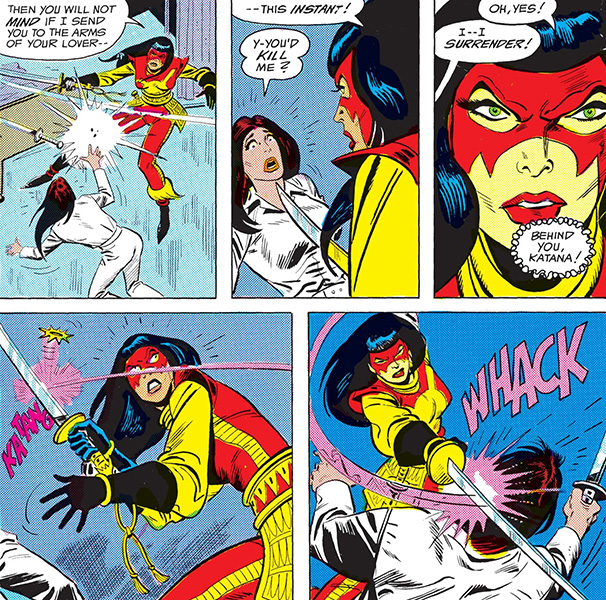 In Katana's first ever appearance, she is one of three new heroes who joins with Batman and two other Super-Hero veterans in his new team the Outsiders, whose first mission finds them saving Gotham from a terrorist organization run by a man called Miklos. From her very first adventure, Katana was shown as being the DCU's best sword-fighter. 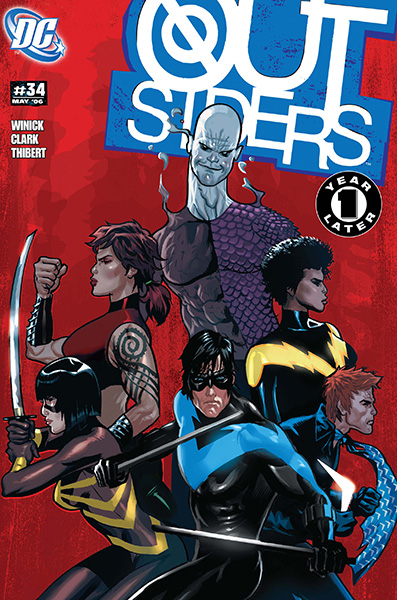 After many adventures together, the Outsiders disbanded. But Katana then joined a new iteration of the Outsiders, led by Nightwing, after helping them defeat the villainous Sabbac. The team fakes their deaths during this time, and Katana starts wearing a new costume, one not based on Japan's flag, as she was exiled from her home country for joining the vigilante team. 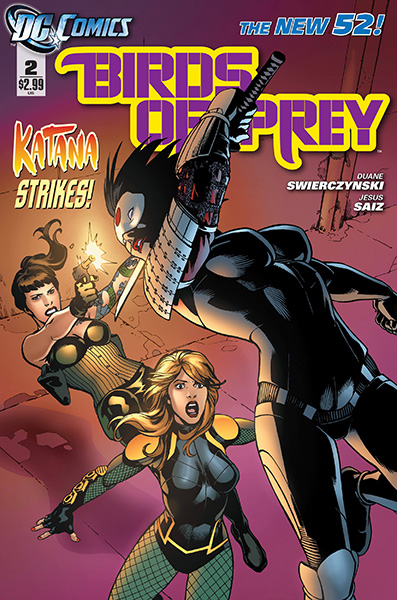 In the post-Flashpoint universe, Tatsu is asked by Barbara Gordon (Batgirl) to join a new version of her team the Birds of Prey, due to Katana's legendary fighting skills, and to fight alongside heroines like the Huntress and "reformed" villains like Poison Ivy. She travels to Gotham on the advice of her husband, whose soul resides inside the sword, but her new teammates think she's not quite all there mentally because she talks to an ancient weapon. 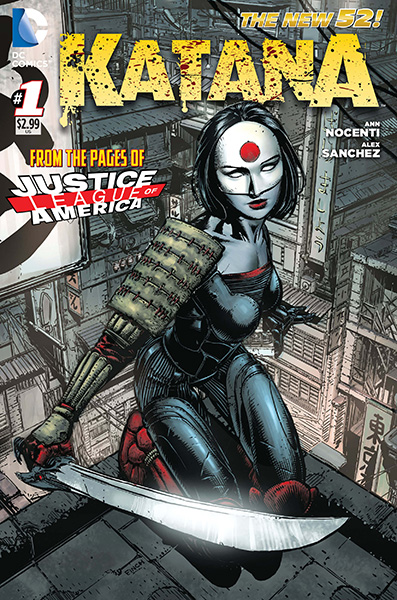 In her first every ongoing solo series, Katana, recently a member of the Justice League of America, travels to Japantown in San Francisco to take down the gangs that run rampant there. Here she encounters fellow Super-Hero the Creeper, who is a reporter by day, but becomes a Japanese evil spirit by night. Katana also discovers new revelations in regards to the deaths of her family.