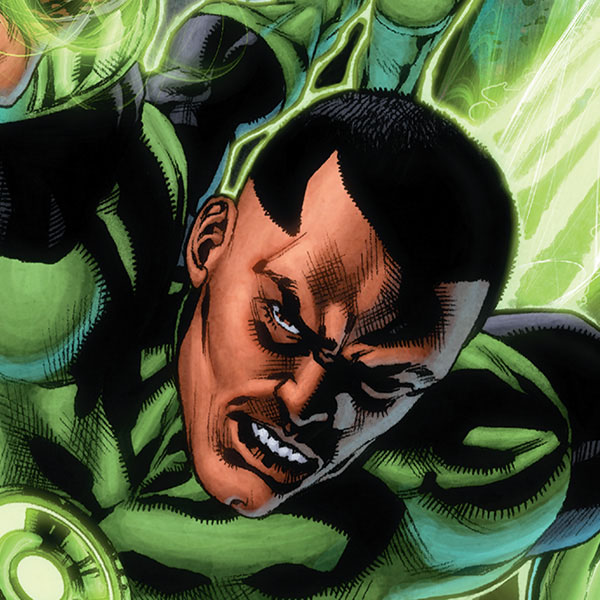 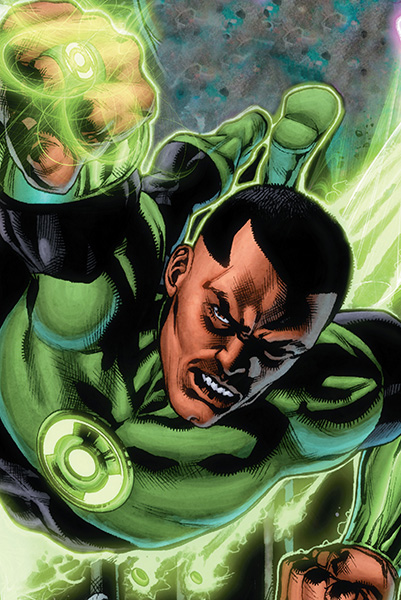 The third human to ever wield a Green Lantern ring, John Stewart's leadership and tactical brilliance is legendary throughout every sector of the galaxy.

The third human to ever wield a Green Lantern ring, John Stewart's leadership and tactical brilliance is legendary throughout every sector of the galaxy. 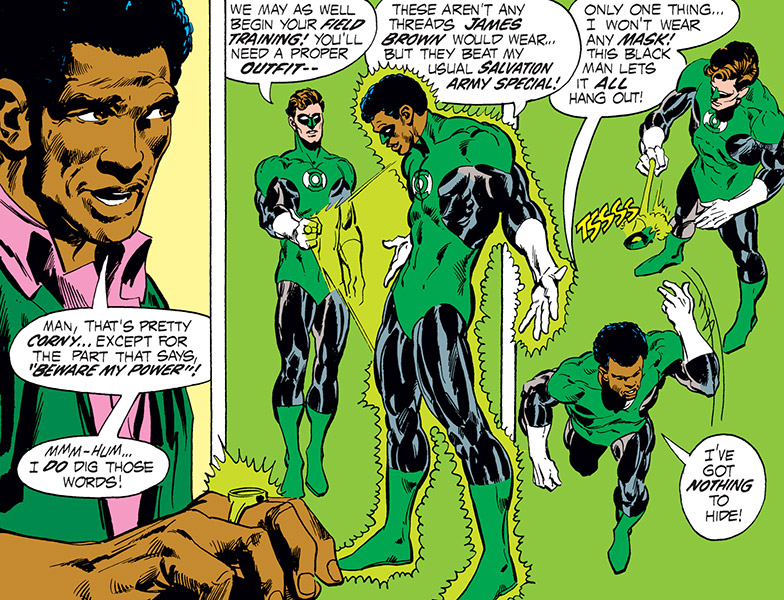 A former architect, Stewart creates his power ring constructs differently than his fellow Lanterns, as they are never hollow. He always builds them from the inside out, down to the last nut and bolt—the result of his keen architectural mind. Stewart also differs from some of Earth’s other Green Lanterns in that he has chosen not to conceal his identity behind a mask.

John Stewart has suffered numerous tragedies in his life. But he’s always overcome them, and emerged even more dedicated to the ideals for which the Green Lantern Corps stands.

John Stewart was born in Detroit, Michigan. In his youth, he found himself resenting his family’s impoverished circumstances, and would often get into trouble with the law. His mother was a community organizer, who tried to improve life for her family. In order to pay his way through college and earn a degree in architecture, Stewart joined the Marine Corps, against his mother’s wishes. In the Marines, he proved to be an expert sniper. It wasn’t long before Stewart was promoted to sergeant. He eventually received an honorable discharge, completed his architecture degree and moved to Coast City, California.

When Hal Jordan’s backup Lantern Guy Gardner was incapacitated by a head injury, John Stewart was chosen by the Guardians of the Universe to take his place. Jordan at first objected to Stewart as his alternate, believing he possessed an aggressive attitude toward any kind of authority figure. Nevertheless, the Guardians stood by their selection. In time Hal Jordan realized what an asset Stewart was, and for a while Stewart even replaced Jordan as the permanent Lantern of Earth.

Over the years, Stewart earned a reputation as one of the greatest Green Lanterns of all time. Nevertheless, he suffered many personal tragedies while a member of the Green Lantern Corps. Stewart, however, has remained a faithful Green Lantern, and his loyalty to the Corps has seen him earn the rank of Corps Leader.

John Stewart is known for his meticulously designed constructs, which he is able to create primarily because of his background as an accomplished architect. Due to his military training, one of his favorite constructs is a sniper rifle, which he uses against his enemies from a good distance. 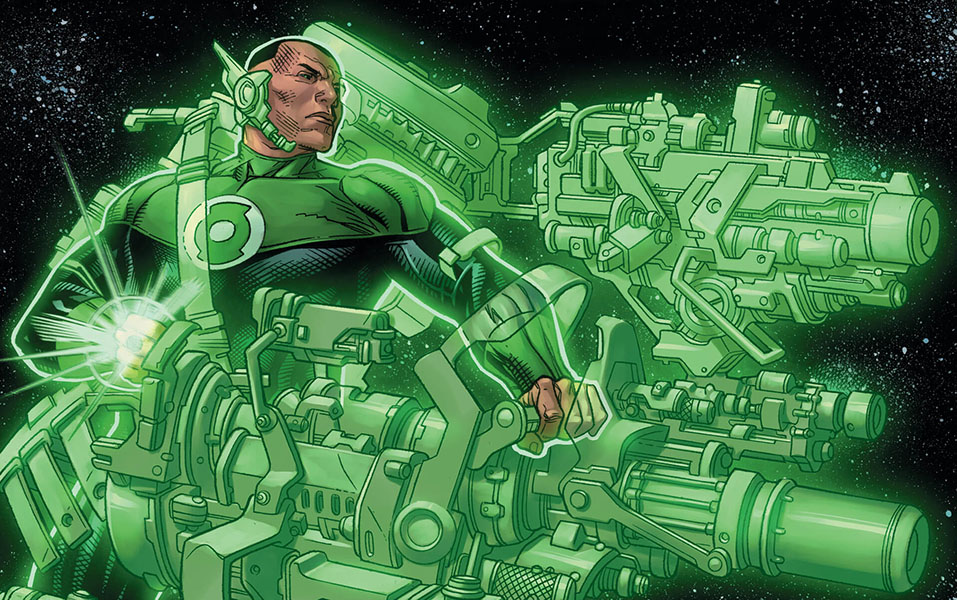 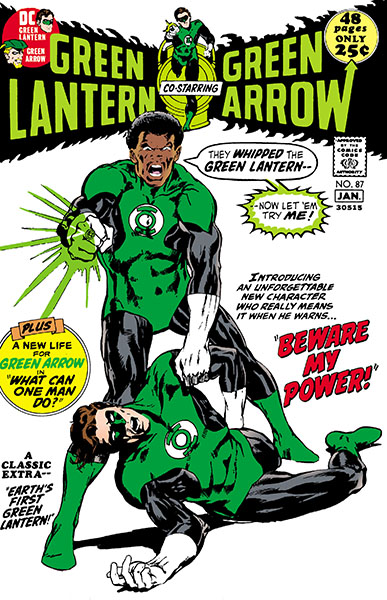 In John Stewart’s first-ever appearance, the newly appointed Lantern was tasked with the job of protecting a politician. It was on his first assignment that he showed veteran Lantern Hal Jordan that he didn’t always do things “by the book,” as he discovered that the politician had staged an assassination attempt. Jordan realized that Stewart’s outside-the-box thinking got the job done, and what an excellent candidate the Guardians had chosen. Stewart had Jordan’s respect from there on out. For the next several years, Stewart remained Jordan’s backup Lantern, and served on Justice League missions when Hal Jordan could not.

When Hal Jordan quit the Green Lantern Corps after becoming fed up with his bosses, the Guardians of the Universe, John Stewart stepped in to become his permanent replacement as the Lantern of Sector 2814. In his first job in this capacity, Stewart fought the villain Major Disaster, who sought a rematch with Jordan, who had defeated him years before. Stewart stopped Major Disaster’s quest for revenge, and proved he was as good a protector of his space sector as Hal Jordan was.

Stewart remained the official Green Lantern of Sector 2814 for almost two years. During this time he received additional training in the use of his powers from Katma Tui, the Lantern from the planet Korugar who replaced Sinestro when he betrayed the Corps. The two Lanterns eventually became more than teacher and pupil, and fell in love.

For a time, John Stewart was happy, as he and Katma married and served in a smaller version of the Green Lantern Corps stationed on Earth, alongside fellow Lanterns like the returned Hal Jordan and the aliens Kilowog and Arisia. But this happiness would not last, as the machinations of the villainous Sinestro caused all the Lanterns’ power rings to become powerless. Now just an ordinary man, Stewart was unable to prevent the villainous Star Sapphire from killing Katma, a murder for which he was falsely accused—though he eventually was able to clear his name.

While still in mourning over the death of his wife, John Stewart became part of a coalition of Earth heroes gathered by the New Gods of New Genesis and Apokolips to stop avatars of the Anti-Life Equation from destroying the universe. Due to his overconfidence in his abilities, Stewart’s actions ultimately resulted in the planet Xanshi being destroyed. This caused Stewart to spiral into a deep depression, blaming himself for genocide for many years. 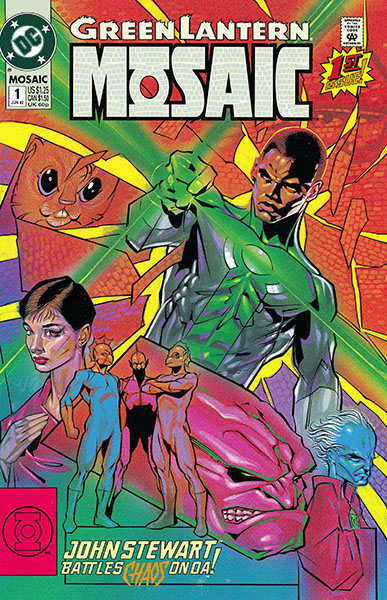 The double tragedy of his wife’s death and the loss of Xanshi sent John Stewart down a dark path of depression and suicidal thoughts. He found a new reason for living, however, when an insane member of the Guardians of the Universe used his power to steal cities from alien worlds all over the cosmos, including Earth, to create a patchwork world on the planet Oa as a mad experiment.

Once this Guardian was defeated, Stewart became the defender of his “Mosaic” world. Despite much difficulty, Stewart was able to bring the planet’s very different species together and forge them into one society. The Guardians of the Universe then granted John Stewart a special status as the first mortal Guardian. He also was given a new title—the Master Builder.

Stewart’s power was taken away again when Hal Jordan, possessed by the fear entity known as Parallax, destroyed the Central Power Battery on Oa, and thus the energy that Stewart needed to be a Guardian.

After Parallax eviscerated the Green Lantern Corps, John Stewart once more found himself an ordinary, mortal man. He joined the intergalactic peacekeeping force known as the Darkstars, until a battle with Darkseid’s son Grayven resulted in Stewart losing the use of his legs. Confined to a wheelchair, Stewart returned to his work as an architect. But as one of Hal Jordan’s last gifts to John before sacrificing himself to save the Earth during the Final Night, he restored the use of John’s legs. Not long after, Earth’s next Green Lantern, Kyle Rayner, took a sabbatical in outer space, and beforehand entrusted Stewart with becoming Earth’s official protector once more. During this time John Stewart became much more active with the Justice League.

When Hal Jordan was reborn, free of Parallax’s influence, the Guardians of the Universe changed their interstellar laws so that each space sector would have two resident Lanterns, working as partners. While Hal Jordan was Lantern 2814.1, John Stewart was now officially Lantern 2814.2. 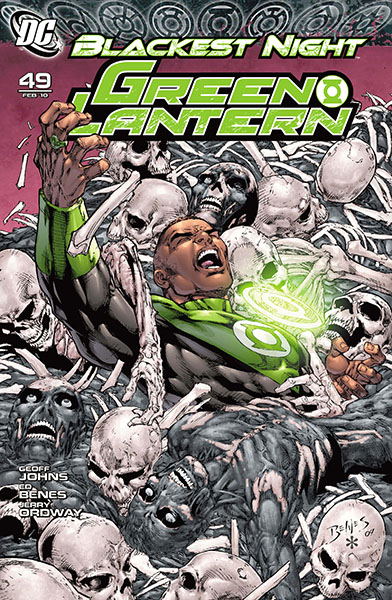 After serving the Green Lantern Corps in such conflicts as the Sinestro Corps Wars, John Stewart faced his biggest challenge during the event known as the Blackest Night. It began when thousands of black power rings flew into the remains of the dead planet Xanshi, reconstituting the entire planet.

The population of Xanshi, along with Stewart’s dead wife Katma Tui, returned as undead Black Lantern Corps members, determined to consume Stewart with guilt over his failure to save them, before destroying him completely. Fortunately, the various Lantern Corps managed to save Stewart, and he was finally able to forgive himself for the destruction of Xanshi.

After the continuity-altering events of 2011’s FLASHPOINT, Hal Jordan was kicked out of the Green Lantern Corps, leaving John Stewart as the main Lantern for Sector 2814. Stewart then joined Guy Gardner and other Lanterns in investigating several attacks in a distant part of the universe. These attacks were the result of an old experiment by the Guardians of the Universe that had gone wrong. During this investigation, John was forced to kill another Lantern who was about to succumb to torture and reveal the access codes to the defense network on Oa.

John was arrested for murder by the Alpha Lanterns, the Green Lantern Corps’ internal affairs officers. But before he could be executed, he was saved by Guy Gardner, along with several other Lanterns who remained loyal to Stewart. He was later exonerated of any wrongdoing. 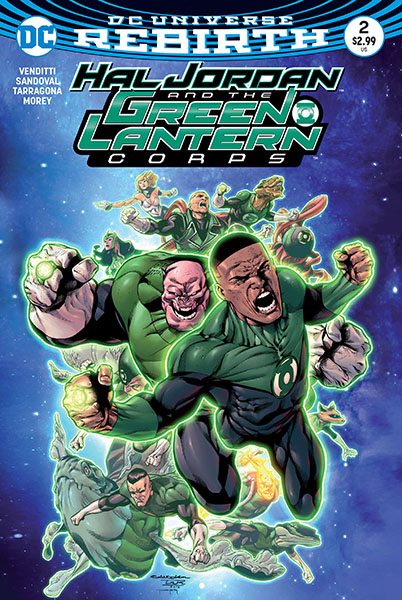 Following the events of 2016’s DC UNIVERSE: REBIRTH #1, the formerly corrupt Sinestro Corps, now under the leadership of Soranik Natu, decided to join forces with the Green Lantern Corps as a united force for good in the universe. Forging these two very different ring-wielding armies into one cohesive unit was no easy task, but Stewart was more than up to the challenge. He was then named Corps Leader of the Green Lantern Corps, an honor long in coming.