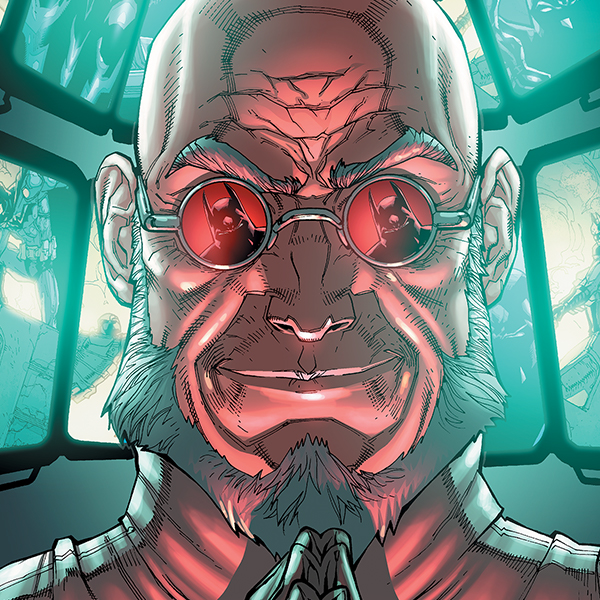 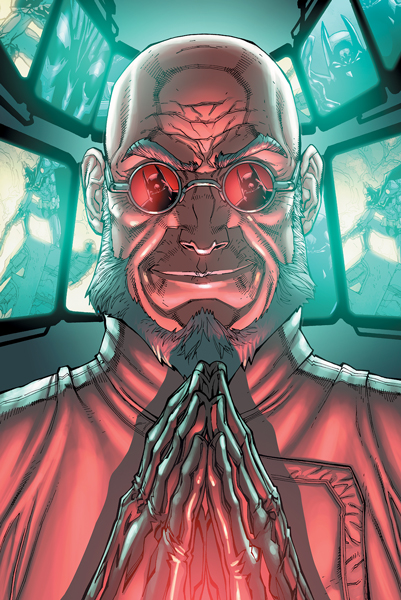 Dr. Hugo Strange found his answer to a life-long pursuit of physical and mental perfection in the Batman. He will do whatever it takes to truly understand this specimen… even if it means becoming Batman himself.

Dr. Hugo Strange found his answer to a life-long pursuit of physical and mental perfection in the Batman. He will do whatever it takes to truly understand this specimen… even if it means becoming Batman himself.

Chemist, biologist, psychologist -- Dr. Hugo Strange is a man of many scientific disciplines, and a master of them all. Under different circumstances, he would undoubtedly be one of the most lauded scientific minds of his age. But like so many scientists in the world of DC Super Heroes, Hugo Strange’s radical ideas about the pursuit of genetic perfection have made him a pariah in the scientific community. A lack of public acknowledgment, however, hasn’t stopped Strange from pursuing his goals, whether that means creating monsters out of men or studying his most promising case to date: the man whose physical prowess and mental cunning protects Gotham City every night. Hugo Strange believes he’s the only person who truly understands Batman. And that this knowledge may be the key to what he’s been pursuing all along. 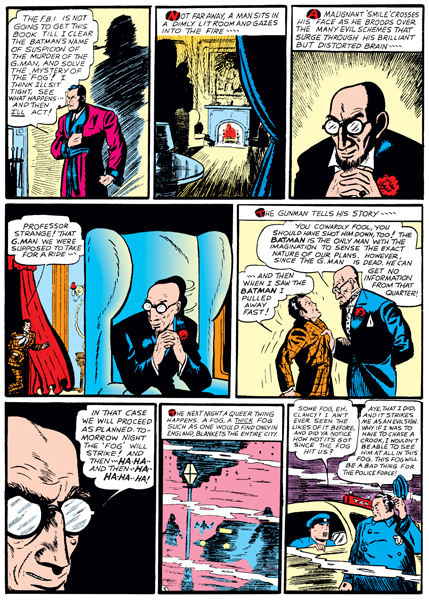 Not very much is known about just where Hugo Strange came from. He was abandoned as a child at an orphanage in Gotham City, where he grew up mostly isolated from his peers. Like many of the DC Universe’s greatest and darkest minds, Hugo Strange always put his studies before the people around him. Despite a lack of financial or personal support, Strange put himself through a prestigious secondary education, eventually becoming a professor himself in the psychology department of Gotham State University. But once he had arrived in the academic spotlight, his new peers learned that his theories on human modification were just as radical as his namesake. After decades of struggling to legitimize his radical theories, Hugo Strange had been completely deplatformed. To continue the work he desperately sought to complete, Hugo Strange sought financial backing from Gotham’s Falcone crime family. Since then, the strange experiments of Hugo Strange have been forever tied to Gotham’s criminal underworld. 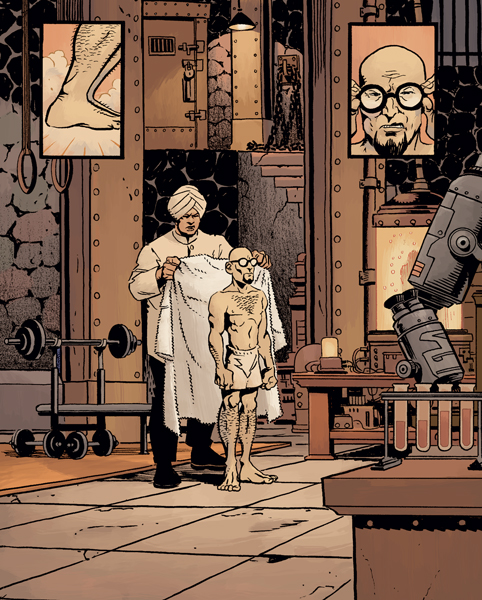 Despite his relatively small stature, Hugo Strange has worked hard to achieve his greatest possible height of physical and mental perfection. Though not quite at the level of Batman himself, Strange has exhibited uncommon levels of strength and agility gained through strenuous physical training. More than his physical training, Hugo Strange is more infamous for his mastery in multiple disciplinary fields. Strange is known as a gifted inventor, chemist and biologist, and uses his knowledge to devise formulas which can turn men into towering monsters. But his most formidable ability may be his background in psychology, which allows him unique insight to understand his foes and their greatest personal weaknesses. 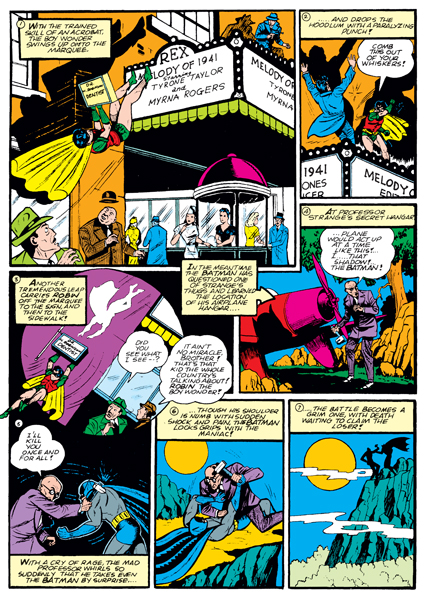 With a debut only 10 issues after Batman himself, Hugo Strange is one of the Dark Knight’s oldest enemies -- not to mention one of comics’ original mad scientists. In his first appearance, Hugo Strange used a lightning-powered machine to generate a dense, city-wide coat of fog, so that his criminal underlings could rob Gotham undetected. Apprehended for this scheme by Batman, Hugo Strange returned in BATMAN #1 from an unnamed asylum, later recognized as an early prototypical appearance of Arkham. This time, Hugo Strange turned his expertise from mechanics to bioengineering. He experimented on a number of fellow inmates to turn them into fifteen foot tall monster men, and even administered the drug on Batman himself. As usual for the Caped Crusader, Batman was able to craft an antidote and stop the Monster Men from wreaking havoc upon Gotham before it was able to permanently deform him. In Strange’s third and final Golden Age appearance (DETECTIVE COMICS #46), Batman confronted the doctor after he unleashed a fear toxin upon Gotham’s citizens, one year before Scarecrow would even make his comic debut. Not yet as concerned as we know him today about letting his enemies die, Batman allowed Strange to fall to his apparent death. Despite a good initial run of terror on Gotham, that would be the last anyone would hear of Hugo Strange for nearly 40 years. 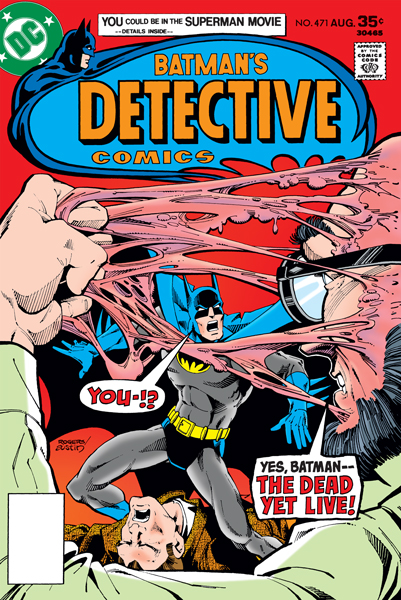 A great deal of continuity gradually changed in the decades during Hugo Strange’s absence. And yet, even as the Batman mythology shifted from Golden Age to Silver Age, Batman’s early encounters with Hugo Strange remained part of the Gotham City canon. In the interim period between his Golden Age disappearance in his Silver Age re-emergence, Strange had been quietly building his power and resources in Europe before finally returning to Gotham under an assumed identity of Dr. Todhunter. As Dr. Todhunter, Strange ran a health clinic for Gotham’s wealthiest citizens, only to both leverage their power against them and use them as further test subjects for his ongoing Monster Men experiments. It was in this endeavor that Hugo Strange achieved his greatest claim to fame: his uncovering of the deepest secret of Gotham’s wealthiest citizen, Bruce Wayne.

Possessed of the knowledge that he and Batman were one and the same, Hugo Strange attempted to auction off Batman’s identity to the highest bidder amongst his greatest enemies. But before bidding could begin in earnest, crime boss Rupert Thorne attempts to pry the secret from him by force -- but only ends up killing him in the process (DETECTIVE COMICS #469-476).

But having faked his death many times before, Hugo Strange was an old hand at making his enemies believe that he was over and done with. Using yoga techniques to survive and slink away from the savage beating given to him by Thorne’s men, Strange spent the next several years exacting vengeance on Thorne by driving him mad with strategic placements of his own holographic image, appearing to haunt him from beyond the grave (DETECTIVE COMICS #513-520). But despite his survival, Strange’s return left him even less connected to reality than ever before. To Strange, it was no longer sufficient to know Batman: he had to become Batman himself. Strange never attempts to give away Bruce’s secret again, but he did spend the rest of his career using his technological and biochemical prowess to usurp the mantle of the Dark Knight. But no matter how clever or fiendish his manipulations, Bruce Wayne always proved to be made of sterner mettle. 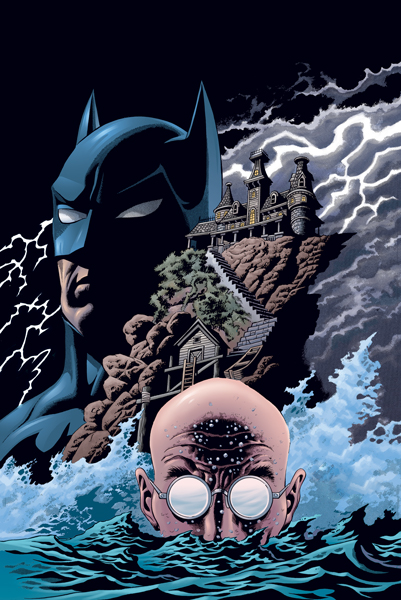 After CRISIS ON INFINITE EARTHS, much of Batman’s past was revisited, rewritten, and reformatted. Flashback story arcs and standalone limited series set in the early days of Batman were a common occurrence through the ‘90s and ‘00s. In these stories set early in Batman’s career, Hugo Strange was often featured as one of his most formidable opponents.

2005’s BATMAN AND THE MONSTER MEN was a retelling of Batman’s original Golden Age encounters with Hugo Strange, in a more modern context -- filling in much of Hugo Strange’s personal backgrounds, motivations, and the depravity of his human experimentation. This time, however, Strange was successful in severing any apparent connection to his “Monster Men” Batman defeats, hanging on by the end to his reputation as a prominent Gotham psychologist.

With his increasing cultural cache, Strange leveraged his position of prominence to paint Batman as an unhinged menace to Gotham, prompting the Gotham City Police Department to assemble a task force to bring him to justice. It’s during this period that Strange once again resumed his quest to take Batman’s place, even dressing as him and romancing mannequins dressed in similar cape and cowl to channel his state of mind. As the police pursued Batman, Strange became increasingly obsessed with discovering his secrets, each theory he proposes more improbable than the last. Ultimately, it was his Strange’s continued underestimation of the dedication and mental discipline required to become Batman that proves to be his undoing (BATMAN: LEGENDS OF THE DARK KNIGHT #11-15).

Drawing upon Strange’s Golden Age connection to fear gas, Strange’s next major story arc in the early Batman timeline established ties with the man he envisioned as his successor, Jonathan Crane -- better known as the Scarecrow. Once again returning from an apparent death at the end of his prior encounter with Batman, Strange got to work mentally manipulating the Scarecrow to answer only to him. But once again, Strange’s underestimation of those around him proves his downfall as Scarecrow turned the tables on him, using Strange’s own plans to end Batman’s career for himself. Thanks to the interference of Catwoman, the trap’s explosive finale failed to kill the Dark Knight as intended. But Strange, all believed, had almost assuredly perished in the ensuing conflagration (BATMAN: LEGENDS OF THE DARK KNIGHT #137-141). Of course, this was not the case. But it would be quite some time before this old enemy returned in the Modern Era. 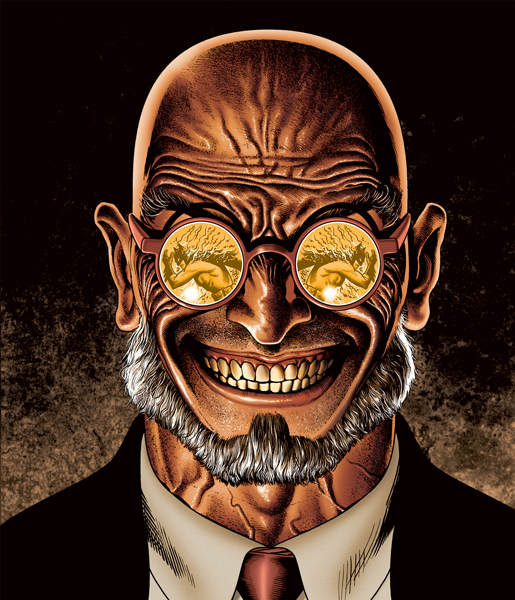 Upon Strange’s eventual but inevitable return, Catwoman became just as much a focus of his fixation as Batman himself. Reappearing in his own Batman cowl, Strange now enlisted the aid of an assistant named Dora, who functioned as his own personal gun-toting Catwoman. Now convinced that Batman and Bruce Wayne were one and the same, Strange infiltrated Wayne Enterprises under the guise of a psychiatrist offering tests for stress and anxiety to the company’s personnel. But rather than coax Bruce into admitting his secret, Bruce and his allies convinced Strange that not only were Bruce Wayne and Batman separate entities, but that Strange himself may have killed the original Batman. This distressing revelation resulted in Strange turning himself into Arkham Asylum for his own failures of character. Of course, the re-emergence of Batman upon his incarceration returned the disgraced psychiatrist to his former enmity, often throwing in with the rest of the city’s troublemakers when a chemical or psychiatric expert was required for some wicked deed. 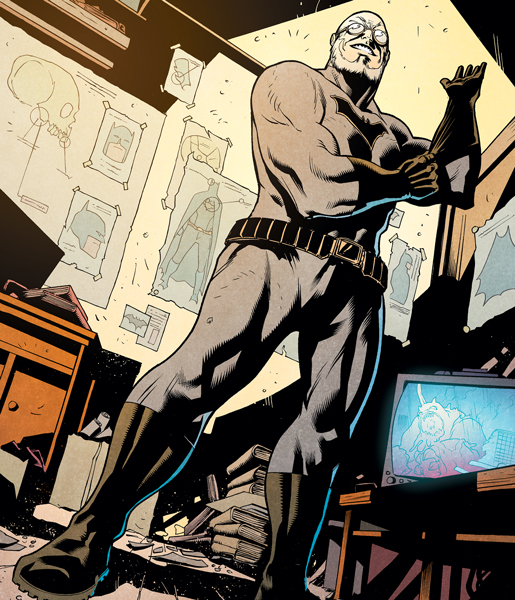 After the FLASHPOINT, Hugo Strange was once again amongst Gotham’s intellectual elite. While young Bruce was away from Gotham in his quest to become Batman, Hugo Strange worked at Wayne Enterprises along with future Gotham villains Doctor Death and Crazy Quilt -- together known as the “Doctors Three” in their extensive research into the human brain (“Batman: Zero Year”). Later, Strange took on an academic career as a professor of the prestigious Gotham Academy. But even as Strange succeeded at the top of his field, an obsession with Batman continued to consume him. This led to a new creation of towering, skyscraper-sized Monster Men to threaten Gotham and challenge Batman to his very limits, allowing Strange to see what he was truly made of. But what Strange failed to account for was the strength of Batman’s network of allies and family members, who together took the professor down (“Night of the Monster Men”).

Committed to Arkham once more, it wasn’t long before Strange had his own run of the place, and a new desire to break a strong man down to his essential components. Such an opportunity arose when Deathstroke the Terminator was committed to Arkham, where Strange took upon himself the duty of killing the man who held back the monster in his heart -- by creating an elaborate gaslighting scenario ultimately culminating in Deathstroke killing the one Arkham doctor who believed he could change (DEATHSTROKE #36-40). Even with no powers or real signature style to call his own, Hugo Strange proves time and again that one of the deadliest weapons in Gotham City is a sharp mind.