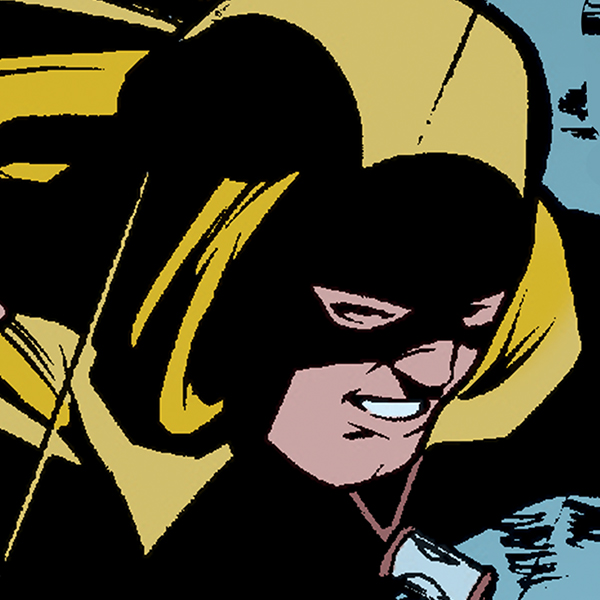 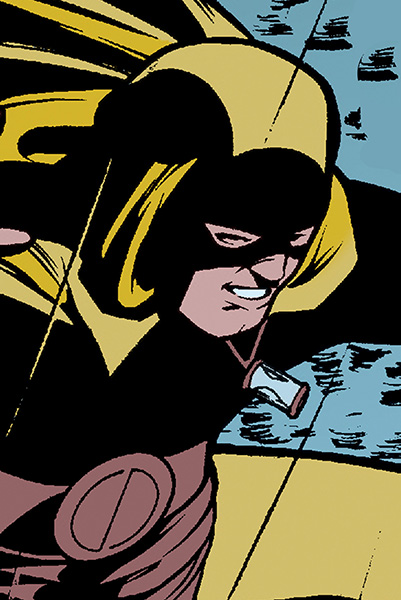 Chemist Rex Tyler uses his Miraclo formula for an “Hour of Power,” giving him all the strength he needs to fight evil for 60 minutes at a time.

Chemist Rex Tyler uses his Miraclo formula for an “Hour of Power,” giving him all the strength he needs to fight evil for 60 minutes at a time.

What would you do if you had superpowers for one hour? For Hourman, the question is more than hypothetical. Given temporary superhuman abilities by his Miraclo serum for one hour a day, Rex Tyler is in a perpetual race against the clock to save the day before his Hour of Power runs out. It was this commitment to being the “Man of the Hour” which led to Hourman’s induction as one of the founding members of the Justice Society of America. 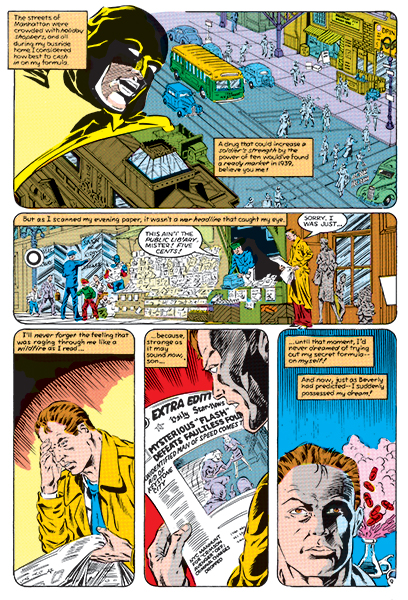 It began simply as a test. Rex Tyler, a brilliant biochemist for the pharmaceutical Bannerman Chemical, was working on a vitamin which could increase the user’s physical abilities for up to an hour at a time. After successfully testing the formula on rats, Tyler volunteered himself to be the wonder drug’s first human test subject. What better way to measure its effects than to take to the streets of Appleton City and fight against crime? Calling himself the “Man of the Hour,” Rex Tyler took out an ad in the paper advertising his services as a bona fide Super Hero. But even when his super-powered exploits proved a rousing success, Tyler couldn’t just return back to the life he had before. The legacy of Hourman had begun.

The human versions of Hourman rely on the experimental Miraclo pills to gain an “Hour of Power.” For 60 minutes after taking Miraclo, Hourman exhibits superhuman strength, speed, durability, vision, and even lung capacity. Thanks to a futuristic hourglass worn around his neck, Rick Tyler also had access to “time vision,” allowing him to see one hour into the future.

The android version of Hourman is actually a collective of self-replicating nanobots, allowing him to heal from any injury. This Hourman is typically as strong as the human Hourman under the effects of Miraclo, but also has the ability to manipulate time -- whether it be looking through time, traveling through time, or stopping time completely. 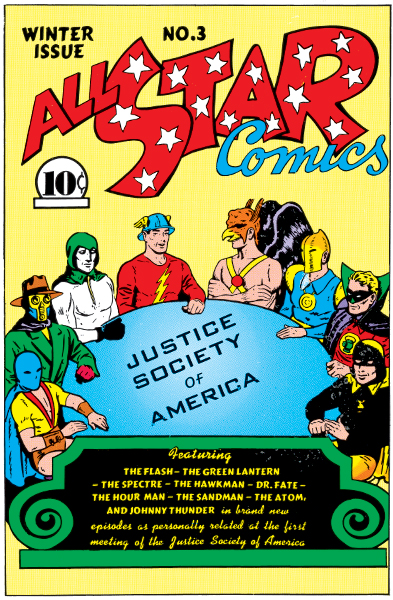 As a chemist, Rex Tyler’s tests of his experimental Miraclo formula as he applied it to crime fighting activities were a rousing success. His strength, speed, and endurance had all been increased beyond human capacity. But fearing what might become of his Miraclo formula if it fell into the public, Tyler kept the formula to himself, using it to continue his life of heroism. Before long, this self-styled “Hourman” became closely associated with a number of like minded peers who all joined to form the Justice Society of America (ALL-STAR COMICS #3, 1940).

But as one of the least powerful members in this group of titans, Tyler felt constant pressure to improve the effects of his formula. Eventually, Hourman developed a chemical addiction to Miraclo which would ruin his life. Tyler’s chickens came home to roost when one day, his dependence on Miraclo became so dire that he suffered a heart attack on the job. Fortunately, fellow Society member Doctor Fate was on the scene, and cleansed is system of the so-called wonder drug (ALL-STAR SQUADRON ANNUAL #3, 1981).

Retired from superheroics, Tyler used money from private patents to purchase Bannerman Chemical, rebranding it as TylerCo and doing what he could to help the world in the capacity he originally sought out to do before getting caught up in the Super-Lifestyle. He married a woman, Wendi, and had a son, Richard. But when the “Zero Hour” struck across the timeline, Rex returned to his role as Hourman one last time to battle the temporal threat of Extant with his former JSA colleagues. Extant’s powers over time killed many of the JSA’s members, and Rex seemed to be among them -- though he was eventually revealed to have been saved from that fate in the nick of time by another android Hourman from the distant future. 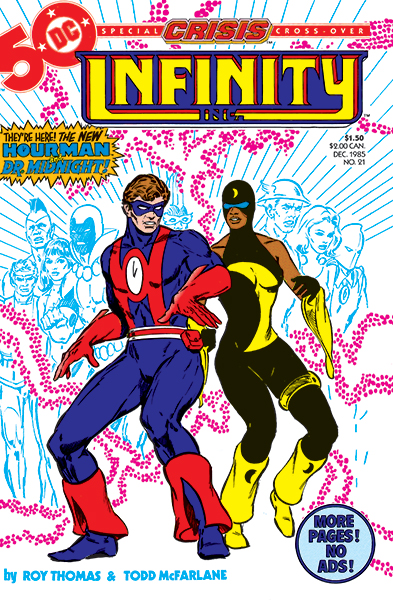 Richard Tyler, son of the original Hourman, never felt the call to scientific pursuit which had defined so much of his father’s life -- so much, in fact, that Rex never seemed to have time for his son while managing the operations of TylerCo. All the parenting Rex seemed to have time for to his son was one single, solemn warning: to never use the Miraclo pills which once gave him power, lest their addictive properties consume him. But when the world was in peril during the CRISIS ON INFINITE EARTHS, and the original Justice Society was trapped fighting a perpetual Ragnarok to save all of existence, Rick felt no choice but to take up arms against the apocalypse and save as many people as he could. Richard took those forbidden Miraclo pills, and despite his father’s warnings ended up with a legacy team to the original Justice Society: Infinity, Inc. But after being led to believe he had killed The Wizard, one of the Justice Society’s oldest enemies, he almost immediately gave up the identity and retired (INFINITY INC. #36, 1987).

Unfortunately, Rick’s short career as Hourman wasn’t quite short enough: his exposure to Miraclo had left him with devastating leukemia. But after years off the scene, Rick was cured by the Hourman of the distant future who had saved his father. With a new lease on life, Rick Tyler used a newer, safer Miraclo formula to return to duty with a reformed Justice Society of America for the modern age. Rick developed a close relationship with fellow JSA member Jesse Chambers (formerly Jesse Quick, later Liberty Belle), who he eventually married (JUSTICE SOCIETY OF AMERICA, 2007). 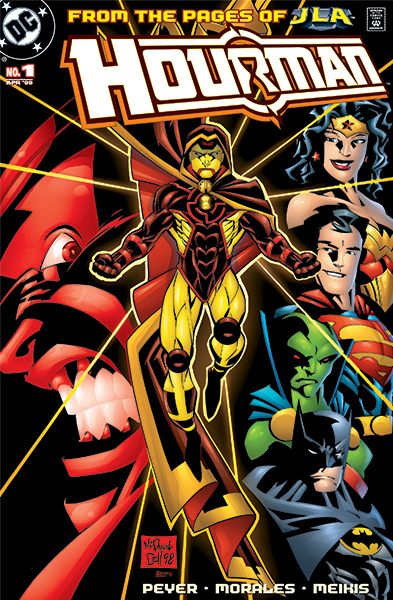 Rex Tyler’s hour of fame lasted longer than anyone could have possibly expected. TylerCo eventually became Tyler Chemorobotics, a company which thrived on developing cutting edge innovation hundreds of thousands of years into the future. Their crowning achievement: a robotic, time traveling Hourman who could be the greatest hero of all time. His construction was commissioned by the New God Metron, who envisioned him to be the perfect candidate to carry on his work in observing all of time and space. In this capacity, Metron entrusted Hourman with the Worlogog, an artifact which enabled him to navigate to any point in the timeline. With this device in hand, Hourman protected the timestream as a member of the 853rd century’s Justice Legion (JLA: ROCK OF AGES, 1997).

Hourman proved essential to the DC: ONE MILLION event, providing a link through time between the modern day Justice League and the far future Justice Legion. But Hourman had also been unwittingly made a carrier of the so-called “Hourman Virus” by Solaris, a living sun and the Justice Legion’s greatest enemy. The Hourman Virus stranded each team in the other’s time period, and spread chaos and discord through man and machine alike. After the teams overcame this, Hourman elected to remain in the modern age so he could learn to grow past his weaknesses in the classical age of heroes. For a time, Hourman replaced Martian Manhunter in the Justice League while he was on a leave of absence, and took up residence in Happy Harbor with former Justice League mascot Snapper Carr -- who gave him the name “Matthew Tyler.” (HOURMAN, 1999) In gratitude to his predecessors, Matthew traveled through time to save the lives of Rex and Richard Tyler, ensuring a future of happiness for each of them.