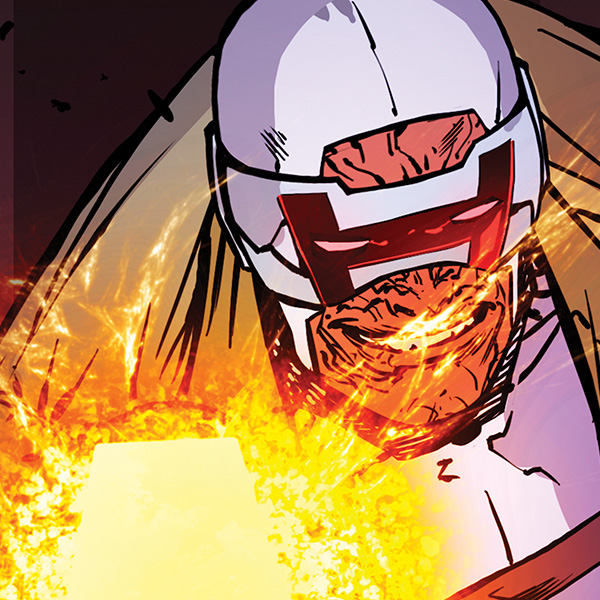 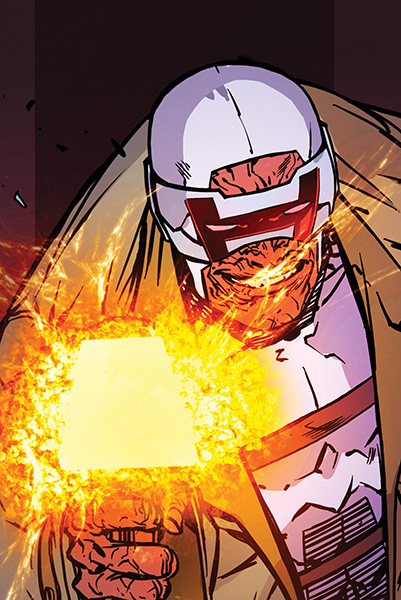 Mick Rory's life has always been about fire: its beauty, its destructive force, and its ability to net him profit alongside his associates, the Rogues.

Mick Rory's life has always been about fire: its beauty, its destructive force, and its ability to net him profit alongside his associates, the Rogues.

Sometimes all it takes is the smallest ember to spark a raging inferno. Mick Rory’s love of fire started innocently enough when he was a small child, but it turned deadly the moment he set his childhood home ablaze, and watched from afar as his family was consumed by the flames.

As he grew older, Mick’s pyromania grew uncontrollable. Inspired by Central City’s band of costumed Super-Villains, the Rogues, Mick invented a handgun-sized flamethrower and a flame-retardant suit for himself. He adopted the code name “Heat Wave” as he began channeling his destructive urges into profit. Eventually, and despite his contentious relationship with the Rogues’ leader, Captain Cold, Mick became an official member of the criminal organization.

Hotheaded and volatile, Heat Wave’s endless need to find an outlet for his peculiar obsession makes him dangerous and unpredictable, but not altogether evil. He’s sometimes turned over new—if slightly charred—leaves at the behest of Super Heroes, who’ve offered him more productive ways to turn up the heat. 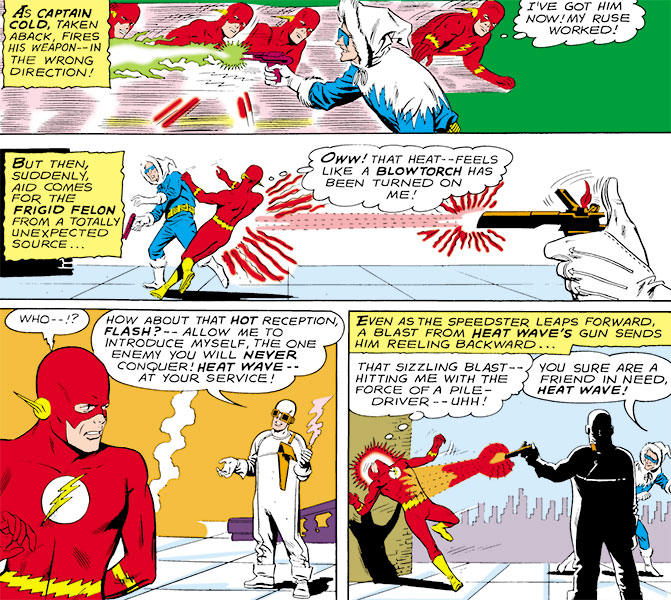 Mick Rory was a hot-tempered and emotional child who grew up outside of Central City on a farm. From a very young age, he was deeply interested in fire. His fascination turned to obsession when he burned his childhood home to the ground with his family still inside.

With the extent of his pyromania made plain, Mick was sent to live with his uncle. During a school field trip to a slaughterhouse, a group of bullies locked Mick in a meat locker, cultivating an intense fear of cold and intensifying his obsession with fire. Unmoored and unhinged, Mick ran away to become a fire-eater in a traveling circus—but the job ended abruptly when Mick burned the big top to the ground. As his pyromania grew, Mick used it to become a Super-Villain. He made himself a suit and a flamethrower, gave himself a code name and began facing off against the Flash.

It wasn’t long before Mick attracted the attention of the Rogues, who were at first averse to his brand of villainy, but came to accept him as one of their own.

Under most circumstances, Mick has no metahuman abilities. His obsession with fire drives him to invent new technology like flamethrowers and fireproof costumes. He has above-average physical strength and agility, and has shown an above-average tolerance for heat and fire. He’s an accomplished burglar and escape artist.

In some incarnations, Heat Wave has been shown to possess pyrokinetic abilities, allowing him to manipulate flames through his body. This ability was due to an experimental procedure merging his DNA with his flamethrower, resulting in a conductive port on his chest. 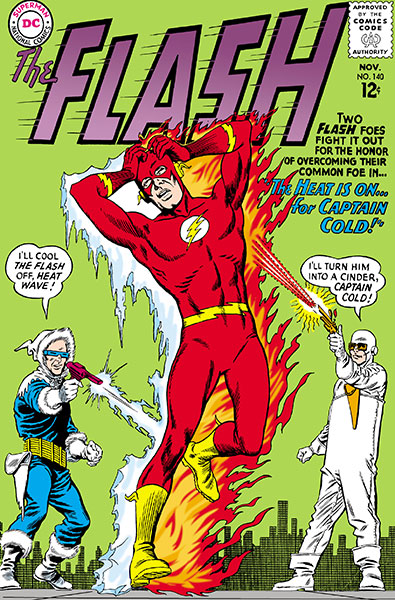 Mick’s relationship with the Rogues, specifically Captain Cold, was uneasy at first due to Mick’s fear of low temperatures. He and Cold clashed with each other almost as often as they did with the Flash. They realized over time, however, that they were stronger together, which prompted Captain Cold to invite Mick to join the Rogues officially.

With the Rogues helping Mick to focus his pyromania on more “productive” (albeit criminal) outlets, Mick became a fixture of Central City’s criminal underground. He and Cold eventually buried their on-again-off-again grudge and became friends and partners, though their old rivalry occasionally flared between them.

In 1995 the Super-Villain Abra Kadabra manipulated Mick into helping him pull off a scheme that Kadabra promised would result in great power and fortune. Unfortunately, Mick agreed to help only to be double-crossed and killed—in what wound up a plot to resurrect the demon lord Neron. This set off the events of 1995’s UNDERWORLD UNLEASHED, which found Neron using the bodies of the Rogues as his vessels.

Once Neron was defeated, Mick’s soul was returned to his body, but he didn’t immediately return to his criminal ways. He left the country to join a brotherhood of Zhutanian monks (in NEW YEAR’S EVIL: THE ROGUES #1, 1998).

Years later, during the IDENTITY CRISIS storyline and following the events of FLASH #216 (2005), a secret about Mick’s past came to light. It was revealed, thanks to a letter from the then-deceased Barry Allen to his successor Wally West, that Mick and several other Rogues had been mentally manipulated by the villainous Top, with help from the Trickster, to believe themselves “reformed.” During this time Mick became a firefighter, an investigator and a friend of Barry and Wally. Mick and several other brainwashed Rogues began working for the FBI and Project Cadmus as backup agents.

During ROGUE WAR (2005), however, the Top reversed his manipulation. This prompted Mick to return to his life as Heat Wave and immediately rejoin the Rogues.

Following the events of FLASHPOINT (2011), Heat Wave was given metahuman abilities via genetic manipulation. He gained the power to shoot fire from a port in his chest, and remained a core member of the Rogues in Central City. 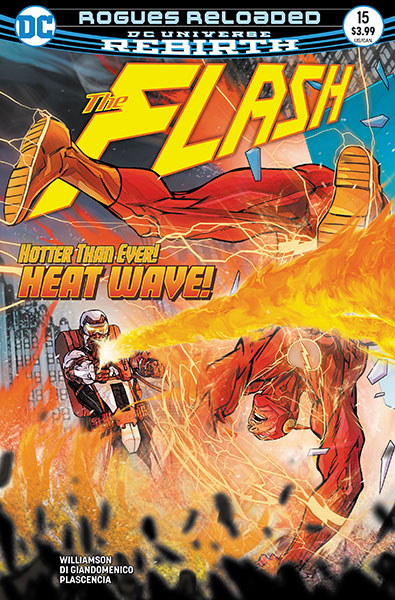 Heat Wave’s original backstory was reinstated, along with his lack of metahuman abilities, after the events of DC UNIVERSE REBIRTH #1 (2016). He continues to operate as a Rogue in their eternal war against the Flash.