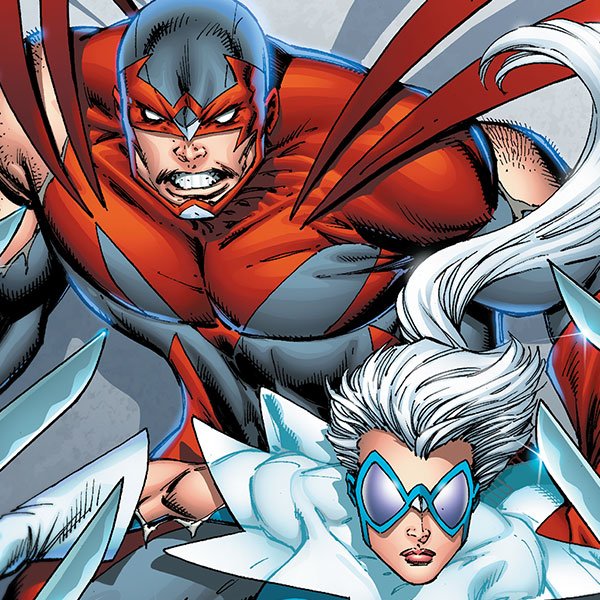 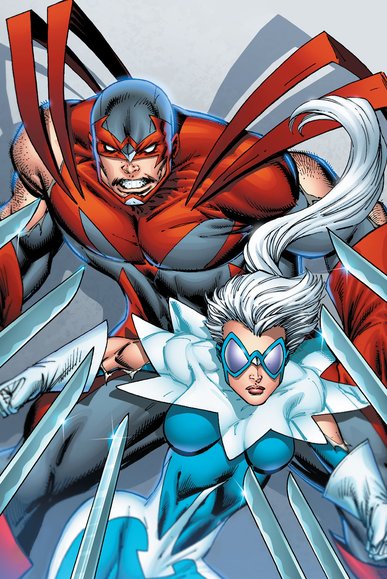 The universe's duality is made manifest in the form of two champions, one for war and one for peace, empowered by the Lords of Order and Chaos.

The universe's duality is made manifest in the form of two champions, one for war and one for peace, empowered by the Lords of Order and Chaos.

The cosmic forces that maintain balance in the universe work in strange and unexpected ways. Years ago, the Lords of Chaos and Order gifted brothers Hank and Don Hall with superpowers, transforming them into the Super Hero team Hawk and Dove, the avatars for the forces of War and Peace.

Hank became Hawk, a red-and-white-clad Super Hero, defined by anger and aggression, while Don, known for his compassion and levelheadedness, became Dove, who wore a mirroring blue-and-white costume. Hank’s shoot-first, ask-questions-later attitude, coupled with his unwillingness to compromise and mile-wide stubborn streak, made him a difficult person to work with for just about everyone but his brother—and even Don had his limits—while Don’s willingness to see compromise and aversion to fighting often made him reluctant to act.

Tragically, the brothers’ partnership was cut short when Don was killed during the catastrophic events of the Crisis on Infinite Earths. College student Dawn Granger was chosen by the Lords to replace him. Over time, Hank accepted Dawn as a fitting successor to his brother.

Dawn’s level head, along with her willingness to see reason and compromise, make her the perfect counterpoint to Hank’s hair-trigger rage and stubbornness. But her measured manner should never be mistaken for weakness. Even though she may be more careful with her power than her partner is, she’s anything but a pushover. 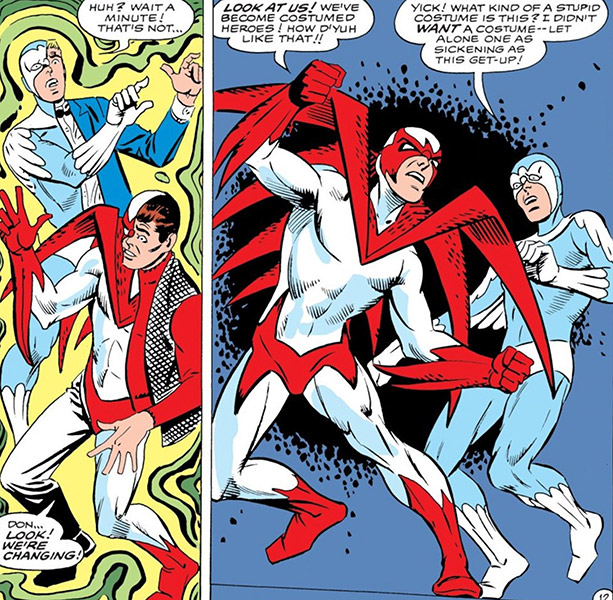 Hank and Don were the sons of a man named Irwin Hall, a judge who had gathered no shortage of powerful enemies after convicting criminals for his entire career. Thankfully, Hank and Don were more than ready to do what it took to keep their father safe.

One night, as Hank and Don worked to foil an assassination plot by a gang of Judge Hall’s enemies, a Lord of Chaos and a Lord of Order visited them. The Lords imbued the brothers with the power to not only survive this specific encounter, but to stand against injustice everywhere. Empowered by the Lord of Chaos, Hank became Hawk; while Don, empowered by the Lord of Order, became Dove.

Hawk and Dove worked together as a crime-fighting duo, with Hawk’s fiery rage balanced out by Dove’s deliberate logic. But brothers will be brothers. This made for a steep learning curve when it came to teamwork, thanks to Hawk’s storming off on his own when frustrated with his brother’s lack of action.

Tragically, Don was killed during the Crisis on Infinite Earths, and the responsibilities of Dove fell onto the shoulders of a woman named Dawn Granger. While in London with her mother, an American diplomat, Dawn was caught in a terrorist attack. It just so happened that this attack took place at the same time as the Crisis. Right at the moment of Don’s death, the Lords of Chaos and Order immediately transferred his power to a new host in order to maintain balance, and Dawn became the new Dove. She thwarted the terrorist attack and saved those threatened by it.

Hank and Dawn found each other shortly thereafter, and began working closely as a team, becoming known as the Avatars of War and Peace in the DC Universe.

Both Hawk’s and Dove’s powers rely on a “danger sense” that allows them to tap into their abilities. For Hawk, that means access to superhuman durability, strength and stamina, as well as claws. For Dove, it means superhuman endurance, strength and agility. Both Hawk and Dove are able to fly, and in the right circumstances, their danger sense can be circumvented, allowing them to tap into their powers at will. 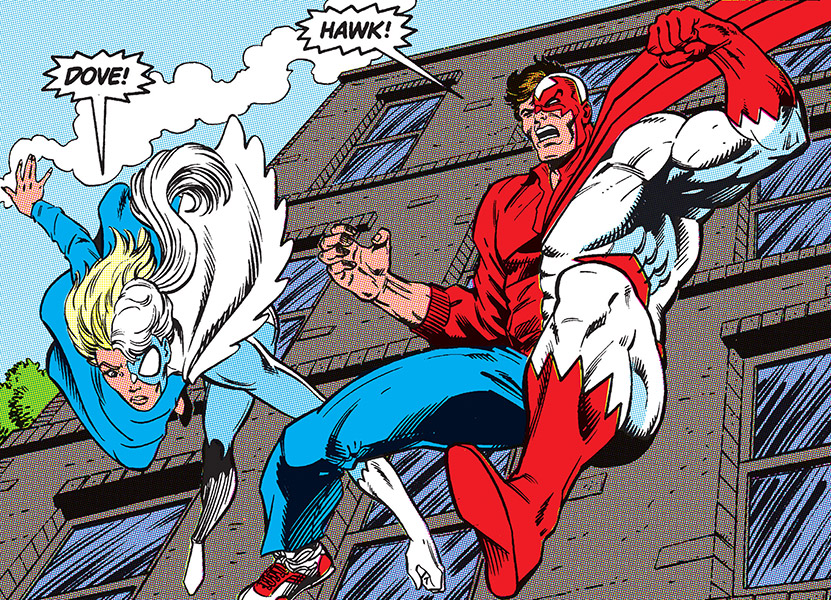 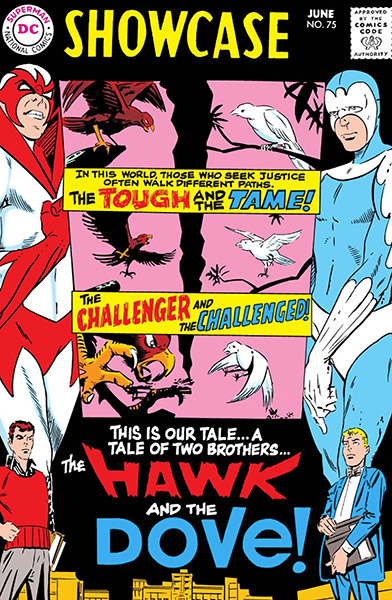 Following their sudden empowerment by the Lords of Chaos and Order, Hank and Don Hall committed themselves to living their lives as the Super Heroes Hawk and Dove.

Bookish, levelheaded and kind, Don was frequently made to play mediator for Hank, who was rash, abrasive and quick-tempered. This made them a perfect pair, but a challenge to others. Nevertheless, they joined the Teen Titans, and operated out of Titans Tower alongside Super Heroes like Robin, Kid Flash, Speedy and Wonder Girl.

Both Hank and Don eventually retired from the Titans, and chose to concentrate on their education, enrolling in college and hanging up their costumes.

Unfortunately, when the world came under attack by the Anti-Monitor in 1985-1986’s CRISIS ON INFINITE EARTHS, Hank and Don were forced to return to active duty. Fighting an onslaught of the Anti-Monitor's shadow minions, Don sacrificed his life to save a child. His body was vaporized instantly, leaving Hank fighting alone and unanchored.

Dawn’s transition from civilian to Super Hero was a rocky one. After a Lord of Order empowered her during the Crisis on Infinite Earths, she was left without direction or guidance. It wasn’t until she attended a memorial for the heroes who’d been lost in the Crisis that she knew Hank was the other half of her new equation. 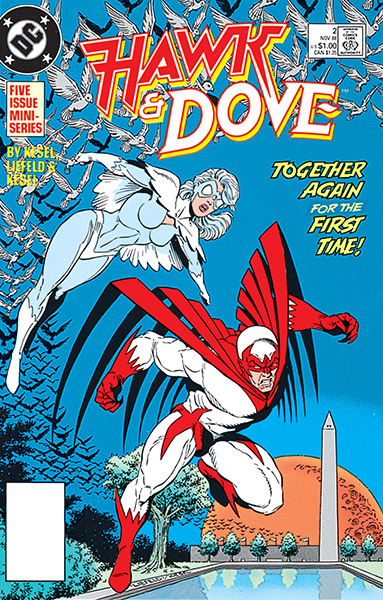 Dawn followed Hank to Washington and worked her way into his social circles until she could state her case for being his new partner. But Hank was not easily convinced. His recent loss, coupled with his naturally prickly nature, led him to reject the idea that there could ever be a new Dove. Dawn was not so easily deterred. After she proved her usefulness against a Super-Villain named Kestrel, Hank grudgingly agreed to work with Dawn on a permanent basis.

Soon after, the Lord of Chaos and the Lord of Order who imbued Hank and Dawn with their powers were killed in a conflict with their peers, a process that caused their essences to merge even more completely with Hawk and Dove. Through this merger, the duo became more powerful than ever.

Despite Dawn’s best efforts to work with Hank, his rage and grief continued to consume huge parts of him, in unexpected ways. During the ARMAGEDDON 2001 event, a time-traveler from 50 years in the future visited the present to warn the world about a tyrant ruler named Monarch who would eventually come to power. The time-traveler, a scientist named Matthew Ryder, explained that Monarch’s rule had begun when every hero on Earth was killed, creating a power vacuum that he filled with evil and oppression.

Together, Earth’s heroes moved to take down Monarch before his transformation, only to discover that Monarch’s true identity was none other than a futuristic version of Hank Hall. During the fight, Monarch killed Dawn, leaving Hank again alone and adrift, locked in an identity crisis.

The temporal anomaly that allowed two versions of Hank Hall to exist at once caused an additional problem after Dawn’s death. The paradoxical situation caused Dawn’s powers to funnel into Hank, rather than finding a new host, transforming Hank into a nearly omniscient being called Extant.

As Extant, Hank would ignite the timeline-manipulating events of 1994’s ZERO HOUR, before a team of Super Heroes—including Doctor Fate and the time-traveling Waverider—worked to resurrect Dawn Granger and attempted to bring Hank down yet again. Only after the catastrophe was averted did time knit itself back together, retroactively “deleting” Hank’s time as Extant and Monarch out of the prime timeline.

Years later, the Justice Society of America was forced to face off against the villain Mordru, who revealed that Dawn’s death at the hands of Monarch had actually been an illusion orchestrated by Mordru himself.

Once she’d been saved and resuscitated by the JSA, Dawn was joined by a new Hawk, her long-lost sister Holly Granger. Together, Dawn and Holly worked with the Teen Titans to face off against some of Hank and Dawn’s old enemies like Kestrel, before striking out on their own. On occasion, they would team up with the Titans East, led by Cyborg, but were largely free agents.

Hank was eventually resurrected as a Black Lantern during 2009-2010’s BLACKEST NIGHT. The Black Lantern Hank isolated and killed Holly, the trauma of which made Dawn realize that her radiance powers were capable of destroying Black Lanterns. She then had a vision of Don, who assured her she could save Hank without destroying him.

Eventually, Dawn realized that her radiance powers were an offshoot of the “white light of creation,” a light on the emotional spectrum that the various Lantern Corps tapped into in order to power their rings. Hank would later be resurrected in his true form by the power of the White Lantern Entity. 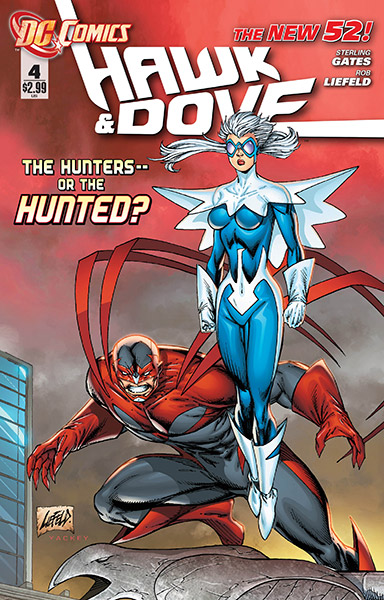 When it was revealed that an old Titans enemy, Mr. Twister, had been working to manipulate time and the team’s memories, Hank and Dawn reunited with their old allies. The longer they fought side by side, the more of their memories were reawakened, filling in gaps they hadn’t realized were there.

Together with the Titans, they were able to defeat Mr. Twister. Hawk and Dove then decided to step away from the team once again, choosing to piece their lives back together.

Animation:
• Justice League Unlimited
• Batman: The Brave and the Bold