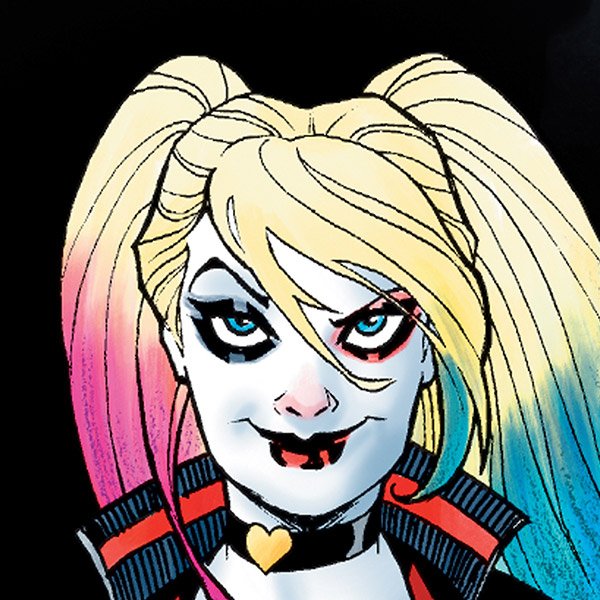 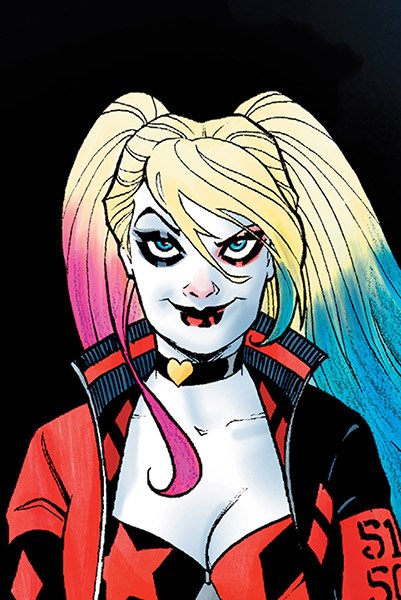 The multiverse would be a much less lively place without the hijinks and shenanigans of the former Dr. Harleen Quinzel, the one and only Clown Princess of Crime.

The multiverse would be a much less lively place without the hijinks and shenanigans of the former Dr. Harleen Quinzel, the one and only Clown Princess of Crime.

Sometimes love can make people do crazy things. Other times? It drives them completely insane. Such is the case with Harley Quinn, formerly Dr. Harleen Quinzel. A promising psychologist and intern at Arkham Asylum in Gotham City, Harleen was given the chance to get up close and personal with The Joker, an experience that wound up ending…badly. Harleen became obsessed with her subject, and after falling madly in love with the Clown Prince of Crime, she helped him escape the asylum.

Her love for The Joker inspired Harleen to adopt a new identity, that of Harley Quinn, The Joker’s sidekick-slash-love interest—whether he wanted one or not. (Most of the time? He did not.)

In time, Harley came to realize The Joker was holding her back, and she struck out on her own. She became an entrepreneur and a member of several slightly less-than-reputable super-teams (including the Suicide Squad), Gotham City’s all-girl gang (the Gotham City Sirens) and a traveling sideshow. Along the way Harley has become one of the most popular Super-Villains in the DC Universe, thanks in part to her versatility, charisma and cheery-but-deranged outlook on life.

After all, as Harley would say, if you're going to go a little crazy, you may as well sit back and enjoy the ride!

Like almost everything about her, Harley Quinn’s origin story is constantly changing and evolving. The first time it was told, she was revealed as a brilliant psychologist employed by Arkham Asylum. Dr. Harleen Quinzel, by all accounts, was on the path to a bright and promising future. But her interest in criminal psychology had insidious roots. While she was studying, her professor, Dr. Odin Markus, manipulated Harleen into believing chaos is the only true constant in the world. Markus went so far as to orchestrate a scheme in which Harleen was made to puppeteer her own boyfriend, a man named Guy Kopski, into committing murder on her behalf. 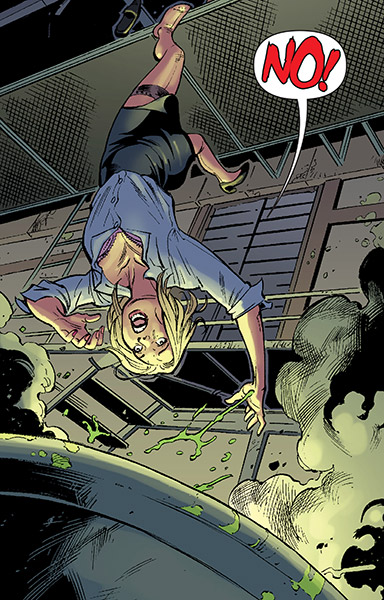 Pleased with the results of his experimentation, Dr. Markus helped Harleen, upon her graduation, to get an internship at Arkham Asylum, which would allow her access to The Joker, with whom she had become obsessed due to his relationship to the chaos she believed existed at the heart of all things. After meeting The Joker in person, and gaining unrestricted access to him, Harleen fell in love with the homicidal clown, despite the mental and physical abuse he showed her. She tried several times to help him escape, before she was caught and made an inmate herself. She then developed the identity of Harley Quinn. Following her own escape, she installed herself as The Joker’s on-again-off-again sidekick.

In another version of Harley’s story, she retained her criminal psychology roots, but her manipulation by her teachers was removed. Instead, she went undercover as an inmate at Arkham in an attempt to gain access to The Joker, rather than winning an internship. The Joker was able to see through her ruse, and he launched a concentrated effort to manipulate her. He managed to convince Harleen to share personal stories and tricked her into believing he’d brought people who’d hurt her to justice, even from inside his cell, promising that he could make her see the world as he did.

The one-sided love affair was cut short, however, when a supervisor at the asylum discovered Harleen’s obsession and attempted to remove her access to The Joker. In a rage, she attempted to kill the supervisor before assisting in The Joker’s escape. The Joker's first order of business as a newly freed man was to take Harleen to Ace Chemicals, the site of his own origin, and push her into a vat—completing her transformation into the Harley we know today.

Harley has no real superpowers, but was injected with a special toxin antidote by Poison Ivy, which resulted in her becoming immune to various forms of chemicals, such as Ivy’s pheromones and Joker Venom. The injection also gave Harley enhanced strength and durability, making her a formidable hand-to-hand combatant.

In addition, Harley is proficient in multiple weapons, often wielding a giant mallet. She sometimes has two pet hyenas, as both companions and attack dogs.

Prior to her interaction with any toxins or chemicals, Harley was a peak athlete and a highly trained gymnast with a genius-level IQ—assets occasionally hindered by her mental instability. 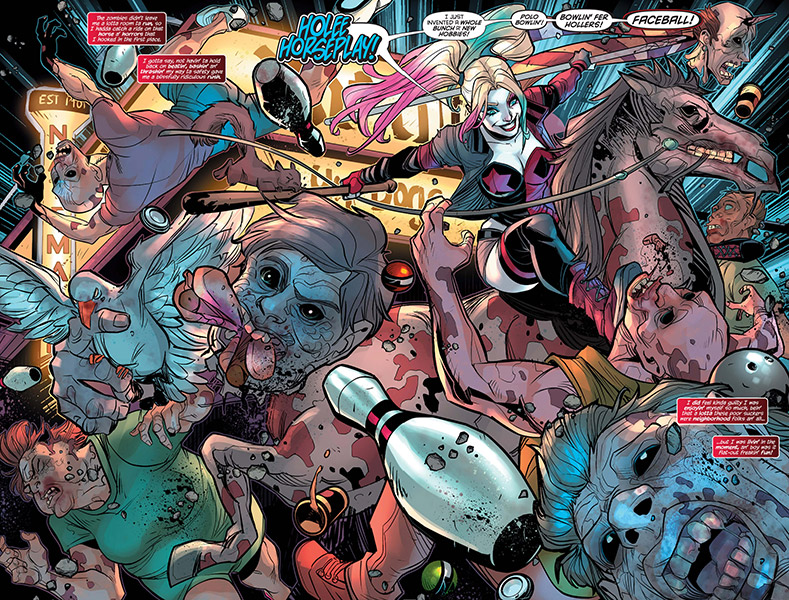 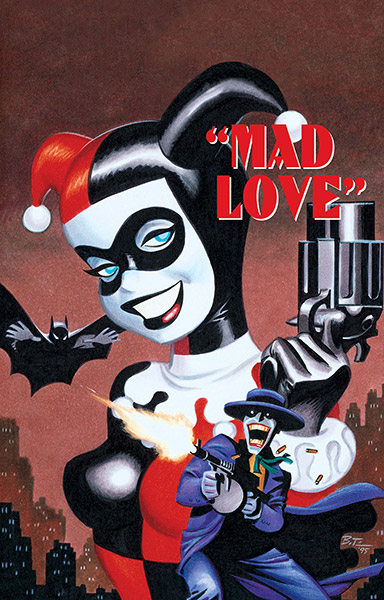 Harley’s origin story was actually first told outside of the main DC Universe, in THE BATMAN ADVENTURES: MAD LOVE (1994). Taking place within the same continuity as Batman: The Animated Series (where Harley Quinn initially debuted in the 1992 episode “Joker’s Favor”), the story established Harley’s origin as an Arkham Asylum psychiatrist meeting The Joker for the first time, falling in love with him and eventually succumbing to her own insanity to become his sidekick and girlfriend.

Harley’s first official appearance in the main continuity of the DCU happened in BATMAN: HARLEY QUINN #1 (1999) as part of the year long “No Man’s Land” crossover event.

Following the events of 1998’s “Cataclysm,” Gotham City had collapsed into an earthquake-ravaged wasteland run by warring factions, including the Batman Family, the GCPD and gangs of various criminals and Super-Villains. BATMAN: HARLEY QUINN #1 adapted Harley’s MAD LOVE origin story, explaining that she was able to break out of Arkham, where she had been an inmate since her own psychotic break as The Joker’s psychologist, thanks to the chaos caused by the Cataclysm earthquake.

In this version of the story, The Joker launched Harley on a rocket in an attempt at murdering her, before confronting the reality of their relationship. The rocket, however, only managed to launch Harley into Robinson Park, an area of the No Man’s Land that Poison Ivy had taken over. Ivy found Harley and injected her with a toxin that rendered her immune to Ivy’s pheromones and other venoms, as well as granting her enhanced strength and durability—enough to allow her to hold her own in hand-to-hand combat against Batman himself.

From this point, Harley became a fixture of Gotham City, both as a sidekick to The Joker and an independent Super-Villain in her own right.

Following a brief stint in Arkham Asylum and willing to try anything once, Harley appeared to fill an opening in the Secret Six in BIRDS OF PREY #105. She quit after her first mission.

Eager to put her life with The Joker behind her, Harley left Gotham in COUNTDOWN and set up shop at a women’s shelter run by Amazons in Metropolis, where she made friends with fellow Gotham expat Holly Robinson. The shelter took Harley to Themyscira, where both she and Holly were made to train as Amazonian warriors. Unfortunately, it was revealed that the Amazon they’d believed to be Queen Hippolyta was actually a disguised Granny Goodness, who used the shelter as a front to train a new army of Female Furies for Apokolips. Harley was then forced to fight through the fires of Apokolips before returning to Gotham City.

Following her return to Gotham, Harley formed a team with Poison Ivy and Catwoman called the Gotham City Sirens. Though not completely a force for good, the Sirens largely spent their time working to keep Gotham safer—even if it meant focusing on personal vendettas and crossing lines Batman and his friends never would.

Things began to fall apart, however, when Harley broke into Arkham with the goal of killing The Joker once and for all. Instead, when she reached his cell, he convinced her to rejoin him and betray Ivy and Selina, fracturing the Sirens’ bonds and setting off a cascade of backstabbing among the three women. 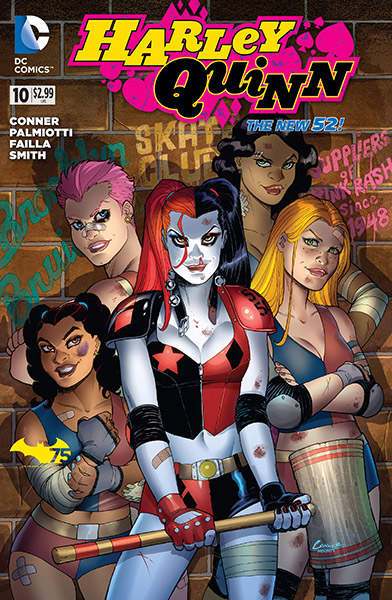 Following FLASHPOINT (2011), Harley was given a new origin story that involved The Joker forcibly pushing her into a vat at Ace Chemicals in order to transform her physically the way he had been transformed. The traumatic event splintered their relationship, and left Harley dangerously unstable and less anchored in Gotham than she’d been in the past.

In SUICIDE SQUAD #1 (2011), Quinn was drafted into the Suicide Squad by Amanda Waller after being captured by Black Canary. She reluctantly served with the team, though her obsession with The Joker kept her preoccupied.

Eventually, upon learning The Joker had been killed (in truth, he’d merely gone into hiding), Harley's mental state crumbled. She wasted no time in betraying the Squad by SUICIDE SQUAD #5 (2012), and escaped to Gotham to try and find evidence of The Joker’s demise. Later, when The Joker was revealed to be alive in DEATH OF THE FAMILY, Harley realized she was no longer in love with him and opted to remove herself from his life completely.

Following her Joker epiphany, Harley left Gotham and moved to New York’s Coney Island with the goal of starting a new life away from the baggage of her past. In her first-ever solo ongoing series, Harley evolved yet again, gaining a brighter, more positive personality and the uncanny ability to break the fourth wall.

In this incarnation, Harley was a true antihero focused on doing her part to better her neighborhood, even if her methods were sometimes questionable. She began making more connections in the larger DC Universe outside of the Batman Family and The Joker’s network of rogues. She became friends with Super Heroes like Power Girl, and even went on to gather her very own “Gang of Harleys”—a troupe of mercenaries inspired by her aesthetic. She teamed up with various heroes in HARLEY’S LITTLE BLACK BOOK (2016), and toured the DC Universe unhindered, “befriending” (or bothering) Superman, Green Lantern and Wonder Woman, among others. 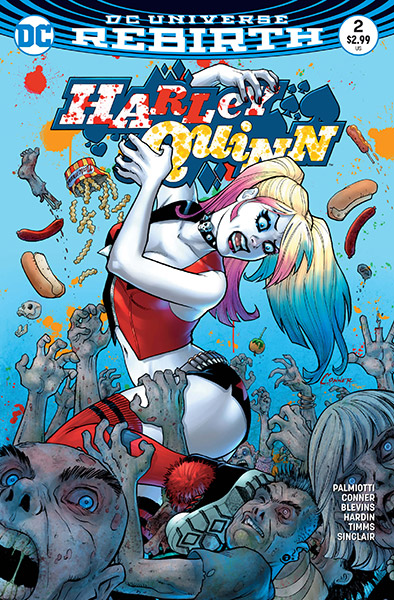 During this time, she became a landlord for her apartment building, the owner of a traveling sideshow and a member of a Roller Derby team, and all while remaining a member of the Suicide Squad.

In the limited series POISON IVY: CYCLE OF LIFE AND DEATH (2015), Harley and Ivy officially repaired their fractured relationship.

Harley’s status quo was largely unchanged after the events of DC UNIVERSE REBIRTH #1, continuing her adventures on Coney Island in HARLEY QUINN (2016) while serving hard time at Belle Reve Penitentiary in SUICIDE SQUAD (2016). How she manages to maintain her independent lifestyle while functioning as a full-time member of the Suicide Squad, however, is anybody’s guess. Harley Quinn’s never had any interest in making sense, after all. Why start now?