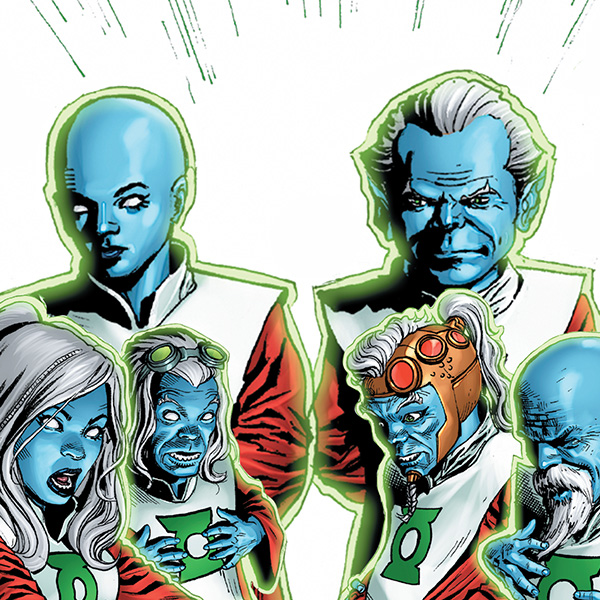 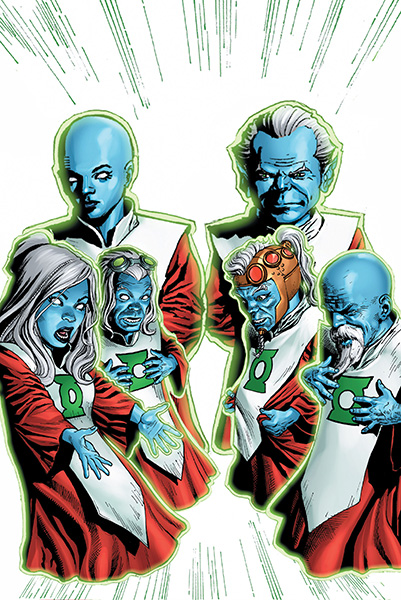 Intergalactic peacekeepers whose obsession with order is born out of guilt, the Guardians of the Universe created and oversee the Green Lantern Corps.

Guardians of the Universe

Guardians of the Universe

Intergalactic peacekeepers whose obsession with order is born out of guilt, the Guardians of the Universe created and oversee the Green Lantern Corps.

When the scientist Krona conducted an illegal experiment that splintered the entire universe into a multiverse, other inhabitants of his planet Maltus declared themselves Guardians of the Universe to atone for the action. To instill order in the cosmos, they created the robot Manhunters, and later replaced them with the Green Lantern Corps.

The Guardians were almost entirely wiped out when one of their Green Lanterns, Hal Jordan, was possessed by the fear avatar Parallax. But the Guardians were eventually reborn, and reformed the Green Lantern Corps. Since then, however, they have often been at odds with their soldiers, as their manipulative ways and obsession with order sometimes leave them with little room for compassion. 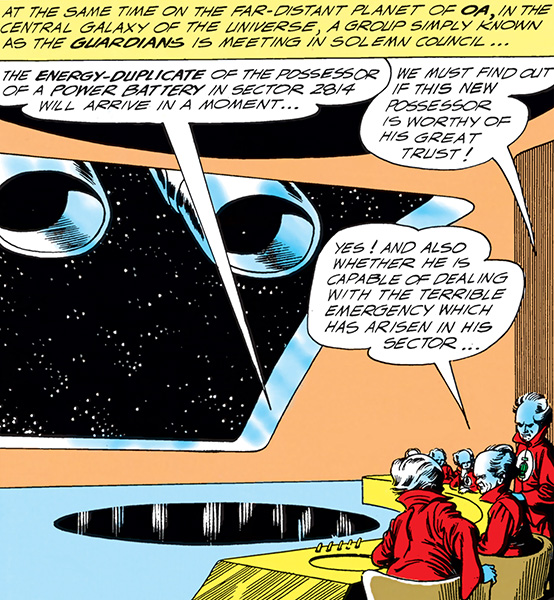 Billions of years ago, the planet Maltus was home to an advanced civilization of blue-skinned humanoids. One Maltusian scientist named Krona sought forbidden knowledge, particularly regarding the creation of the universe. During one of his experiments, Krona saw a hand in the center of a void, holding a swirling star field in its palm. Before Krona could see anything further, his equipment exploded and great energies were unleashed.

Whatever the case, Krona’s crime convinced several Maltusians to atone for his action by becoming the “Guardians of the Universe.”

The Guardians of the Universe are immortal, meaning they can be killed but do not age or suffer disease. Their minds are so evolved that their ability to think and process information does not atrophy, regardless of their age. The Guardians command great psionic power and possess vast knowledge regarding the history of the universe and the forces that make it work. 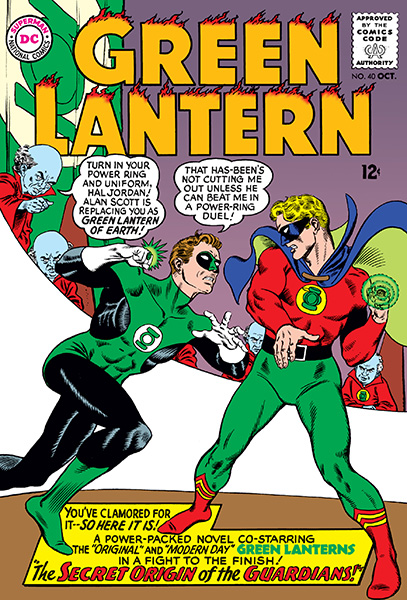 Following Krona’s initial experiment, the Maltusians were visited by a traveler from a parallel universe, Volthoom of Earth-15. Volthoom had used a device called a Travel Lantern to escape the destruction of his world. This device, he explained, tapped into the emotional spectrum, an energy field created by the emotions of all sentient life in the universe. The Guardians became interested in the green light of willpower, the center of the spectrum.

Wishing to have their judgment unclouded, the Guardians purged themselves of their emotions and stored them in a lantern-like machine called the Great Heart. This somehow resulted in creating the first power ring. Volthoom took the ring and had the Great Heart attached to directly access emotional spectrum energies. As the First Lantern, he worked with the Guardians to instill order (GREEN LANTERNS #18, 2017).

Several Maltusian women believed that the purging of emotion was a mistake and that passion and love should be embraced. They left their people behind and established a base on the planet Zamaron. Eventually, they learned to harness the violet energies of love from the emotional spectrum, creating the Star Sapphire champions and the Violet Lantern Corps (SHOWCASE #22, 1959).

Parallax, the embodiment of the yellow fear energy in the emotional spectrum, wreaked havoc across several worlds, causing panic and paranoia that led to wars and destruction. The Guardians fought the fear avatar and imprisoned him in a box-like containment unit (GREEN LANTERN: REBIRTH #1, 2004).

When Volthoom was corrupted, the Guardians destroyed his Travel Lantern and he, in turn, murdered thousands of Maltusians. The Guardians then armed seven beings with rings fueled by willpower. Together they defeated the First Lantern. Volthoom was then imprisoned and the rings of these seven “proto-Green Lanterns” were locked away (GREEN LANTERNS #18, 2017).

To better protect the cosmos, the Guardians created robots named Manhunters to act as their army, believing androids would be incorruptible without the influence of emotions. The Guardians loosely modeled their Manhunters on the formidable Green Martian police force known as the Manhunters (MARTIAN MANHUNTER #21, 2000).

A group of thieves came to Maltus, stealing the box containing Parallax and a map created by Krona that led to an avarice-powered orange lantern on the planet Okaara. Several Guardians and Manhunters engaged in a bloody battle with these thieves, and a truce was agreed upon. The Guardians took possession of Parallax again and promised not to interfere with Okaara or the Vega star system it inhabited as long as the orange light did not leave that territory (GREEN LANTERN #41, 2009).

Believing that the Guardians were wrong to remove emotion, Krona attempted to tap into the full power of the emotional spectrum. The Guardian called Ganthet pleaded with him to stop, but he refused and the Manhunters were sent after him. In retaliation, and to prove that robots could be corrupted without emotions to guide their morality, Krona reprogrammed the Manhunters to conclude that all organic life must be ended to ensure order (GREEN LANTERN #63, 2011).

The Guardians warred against their creations and stopped them, but not before almost all life was wiped from Sector 666, with the exception of a handful of beings who became known as the Five Inversions (GREEN LANTERN #33, 2008). Krona was tried for his crimes and removed from physical existence, his immortal life energy cast out (GREEN LANTERN #40, 1965).

The Massacre of Sector 666 led to a schism among the Guardians. Those who believed in more direct methods of control to ensure order left Oa and became known as the Controllers. 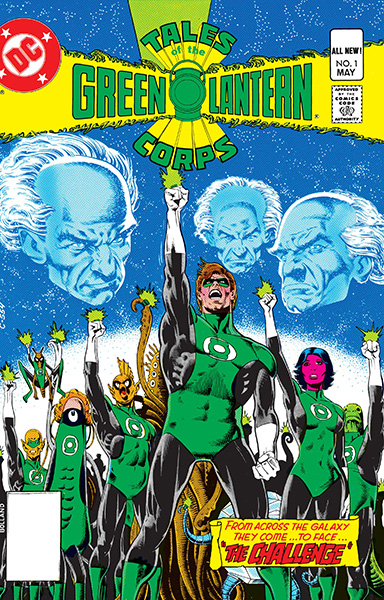 The Guardians decided to recruit a new army of living, sentient beings. On Oa, they created the Central Power Battery to directly access green willpower energy and to house Ion, the living embodiment of will. The Guardians then recruited their second army, giving each soldier a green power ring and – to recharge it – a lantern-like portable battery with a link to the Central Power Battery. This became the Green Lantern Corps (TALES OF THE GREEN LANTERN #1, 1981).

Parallax was imprisoned within the Central Power Battery. Its presence made Green Lantern rings ineffective against anything colored yellow. The Guardians long blamed this weakness on a “yellow impurity” inherent in their technology (GREEN LANTERN: REBIRTH #1, 2004).

Though the Green Martians and Guardians were not enemies, the Martian Manhunters did not trust the Oans or their agents. An agreement was reached in which no Green Lantern would operate within Mars’ solar system as long as the Martian Manhunters were around to protect it themselves (MARTIAN MANHUNTER #21, 2000).

The Guardians discovered that in the anti-matter universe there existed a planet called Qward. The Weaponers and Thunderer warriors of Qward frequently traveled to the positive matter reality and fought the Guardians and their Lanterns (GREEN LANTERN #2, 1960).

In the modern era, the Guardians and their authority were questioned frequently, particularly by the Green Lanterns of Sector 2814. One such Lantern was Abin Sur, a history teacher and philosopher on his planet Ungara. Abin’s successor, Hal Jordan of Earth, likewise repeatedly questioned the methods and motives of the Guardians (GREEN LANTERN #29 – 34, 2008).

On more than one occasion, Krona found ways to return and attack the Guardians and the Green Lantern Corps (GREEN LANTERN #40, 1965; TALES OF THE GREEN LANTERN CORPS #1-3, 1981). But a greater threat came from the Anti-Monitor, a being of enormous power born in the anti-matter universe in the wake of Krona’s attempt to observe the beginning of all reality. The Anti-Monitor attempted to become a god-like being by destroying parallel universes and absorbing the energy unleashed by their destruction. Eventually, various heroes and villains stopped the Anti-Monitor, though time and space were altered in his wake (CRISIS ON INFINITE EARTHS #1-12, 1985-1986).

Following the CRISIS ON INFINITE EARTHS, the Guardians of the Universe left Earth’s dimension with several Zamarons in the hope of creating their race’s next generation. Sadly, their efforts were apparently in vain, as the Guardians returned to Earth’s plane of existence.

The villains Mongul and Cyborg Superman destroyed Hal Jordan’s home of Coast City. Overcome by grief, he was pushed into insanity by Parallax. Determined to gain enough power to alter history and resurrect Coast City, Hal fought through several Green Lanterns and arrived on Oa, where he tapped directly into the Central Power Battery and absorbed its energies, destroying it in the process and rendering all Green Lantern rings powerless. The Guardians gave up their life energies to empower their designated survivor Ganthet, who then restored Jordan’s own abandoned green ring. Ganthet chose Kyle Rayner as the new, and now only, Green Lantern (GREEN LANTERN #47-50, 1994).

Unbeknownst to his former comrades, Jordan had freed both Ion and Parallax, the latter of which now mentally possessed him.

Kyle Rayner served bravely as a Green Lantern for years. After bonding with Ion for a time, he decided to give up his power by reigniting the Central Power Battery on Oa. This caused the Guardians of the Universe to be reborn, under the guidance of Ganthet (GREEN LANTERN #150, 2002). Not long after, Kyle learned the truth about Parallax. This led to a series of events in which Hal was freed from Parallax and the Guardians reformed the Green Lantern Corps (GREEN LANTERN: REBIRTH #1-6, 2004-2005). Soon after, Ganthet and the Guardian named Sayd harnessed the energy of hope and created the Blue Lantern Corps. 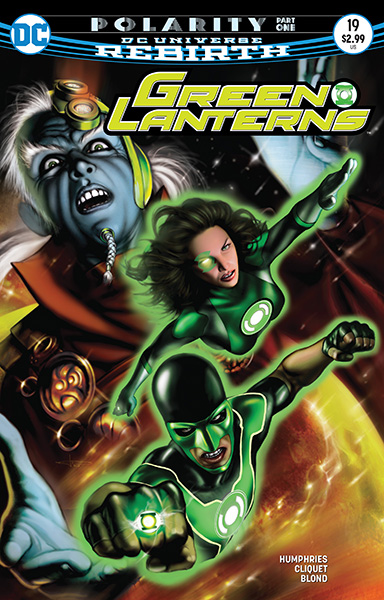 After the renegade Green Lantern named Sinestro created his own fear-empowered Sinestro Corps, and the power of the Black Lantern led to corruption in their ranks, the Guardians reassessed their methods. The Guardians then dealt with Krona, and more secrets from their past were revealed in 2011’s War of the Green Lanterns. Afterwards, the other Guardians decided they needed a new Third Army to act for them, believing the Green Lanterns a flawed creation that needed to be destroyed.

As seen in 2013’s Rise of the Third Army, these new agents of the Guardians were artificial constructs loyal to their will, able to duplicate and assimilate others into their ranks. The First Lantern became involved and helped destroy the Third Army. In the aftermath, Sinestro executed all of the remaining Guardians except for Ganthet and Sayd.

A group of Maltusians that had remained on their home planet to guard the First Lantern became known as the Templar Guardians. After helping them against the Controllers, Ganthet declared that Sayd and the Templar Guardians were the new Guardians of the Universe (HAL JORDAN AND THE GREEN LANTERN CORPS #34, 2018).