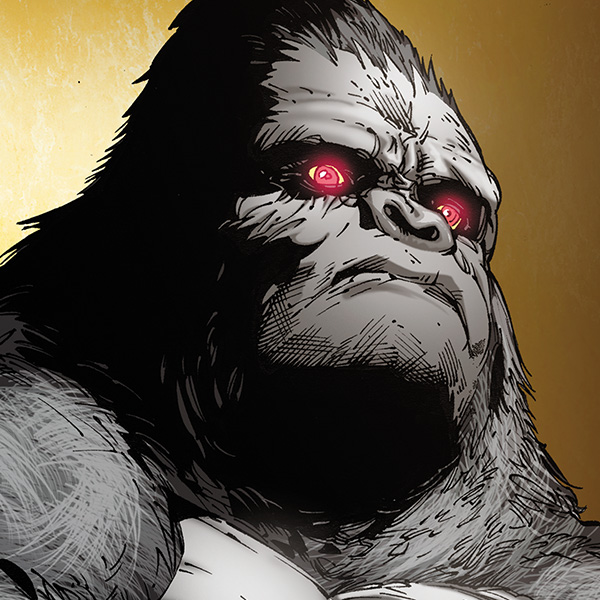 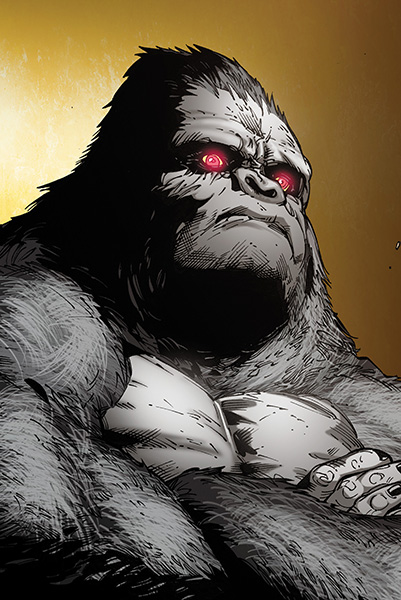 A hyper-intelligent telepathic ape, Gorilla Grodd has sought to rule both the simian and human worlds, though The Flash has frequently thwarted his plans.

A hyper-intelligent telepathic ape, Gorilla Grodd has sought to rule both the simian and human worlds, though The Flash has frequently thwarted his plans.

Although many of the Flash's most dangerous Rogues are criminals with gimmicks or evil speedsters, there is one enemy of the Fastest Man Alive who stands apart -- the hyper intelligent ape known as Gorilla Grodd. The product of a chance encounter with an alien race, Grodd and his people evolved past the common gorillas who lived in his portion of the African jungle, and developed super intelligence, along with a wide array of other mental powers. But while the rest of his people chose to live apart from the world peacefully, Grodd only sought to conquer humanity so he could rule it.

First coming into conflict with the Barry Allen version of the Flash, Grodd was a thorn in not only his side for many years, but also his successor Wally West's. Grodd also plagued the Justice League by joining forces with the likes of the Secret Society of Super-Villains, the Legion of Doom, and other organizations of super criminals bent on world domination. With his genius level intellect combined with his innate animal savagery and his vast mental abilities, Gorilla Grodd is not an enemy to ever be 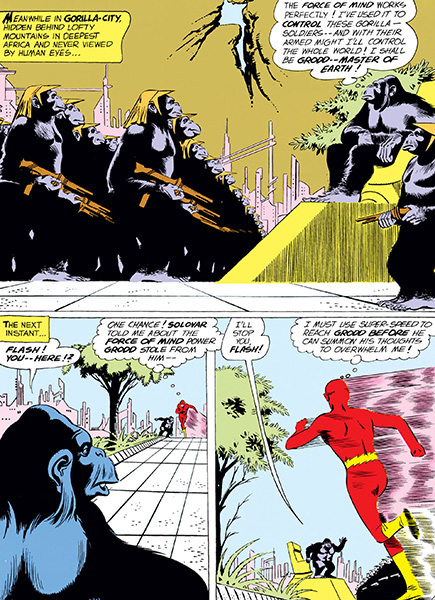 The second Flash Barry Allen first came into conflict with Grodd in the early days of his career as a Super-Hero. While he had already encountered criminals like Captain Cold and the Weather Wizard, Grodd was on another level compared to the villains he had encountered before. Solovar, an ape from the hidden Gorilla City, was pretending to be a regular gorilla in the Central City Zoo, when he contacted the Flash to warn him of Grodd's plans to conquer the human world.

He explained to the Flash how he and his people came to be, telling him that he was once a regular ape until an alien spacecraft crashed in his African jungle home. The local tribe of apes were then changed when the ship's alien pilot granted them incredible intelligence and mental powers, giving them all telepathy and telekinesis. The alien then helped them all build Gorilla City, where the apes chose to live in peace, apart from humanity, with technology more advanced than any human's. But the gorilla named Grodd was corrupt, and believed that the apes should take over humanity, and appointment him as their ruler.

There the residents of Gorilla City lived in peace for many years until their home was discovered by a group of explorers. Grodd then forced one of the explorers to kill the alien who granted them their powers, and he took over Gorilla City, from where he planned to take over the entire world. The ape Solovar journeyed to the outside world for help, and contacted Barry Allen to warn him of the evil gorilla's plans. Once Grodd was defeated by the Flash, he was able to temporarily remove Grodd's mental powers.

Grodd's powers eventually returned, and for the next several years he makes many attempts at destroying the Flash, with schemes involving transferring his mind into that of a human being (alternately named Drew Dowdon or William Dawson), taking away the intelligence of his fellow apes from Gorilla City, and even faking his own death, and transferring his mind into that of a regular ape from the Central City Zoo. When fighting the Flash solo didn't pan out for him, he would team up with several other world conquering villains on many different teams, but he always wound up defeated and imprisoned by the Scarlet Speedster.

After the events of the Crisis on Infinite Earths, Barry Allen died saving the universe, and the mantle of the Flash was passed on to his nephew and former partner Wally West. Gorilla Grodd then attempted many schemes against Wally West just as he did with his mentor Barry Allen. One of Grodd’s most elaborate plans to conquer the world was to arrange King Solovar's assassination, and then manipulate the inhabitants of Gorilla City into war against the human world. He tried to accomplish this with the help of a secret organization of powerful and corrupt apes called Simian Scarlet. But in his hubris, Grodd absorbs too much mental energy from the apes of Gorilla City, and he is left with the intelligence level of a normal gorilla. Although he eventually recovered, he was then placed in a special wing of the prison called Iron Heights.

It was also Grodd who was responsible for Hunter Zolomon's crippling, resulting in the man's transformation into the villainous Zoom after trying to change the past and prevent his own injury. Zoom then became one of Wally West’s greatest adversaries.Grodd once again teamed up with several of the villainous elite of the DC Universe, working with the likes of Lex Luthor and even the Joker. He was also a member of the terrorist group known as Tartarus, who fought against Wally West's team the Titans.

After the events of 2011's FLASHPOINT, reality was altered, and so was much of Grodd's personal history. In this new timeline, Grodd was raised by the village Elders in Gorilla City, who believed him to be the chosen one who would receive something called "The Light," which was the ancient power which altered their gorilla ancestor's minds and evolving them to what they became (and which humans call the Speed Force). The apes of Gorilla City believed that when the Messenger of The Light arrived, he would be able to bring in a new age for Gorilla City.

When the twisted young Grodd finally came of age, he challenged his father, King Grodd, to a life or death fight, the survivor of which would rule over Gorilla City. Father and son fought, but the younger Grodd had no mercy for his father, and killed him. Proclaiming himself the new King Grodd, he ate his father's brain, thereby acquiring all of his knowledge and memories. A terrified Gorilla City was ready to bow before their new king.

Not long after this moment however, after travelling through the Speed Force, Barry Allen (now alive again in this new reality) finds himself in Gorilla City. Seen by the apes of the hidden metropolis as the messenger from an ancient prophecy that heralded him as the Bringer of Light, many apes were now skeptical of Grodd really being the chosen one. Seen as a threat to his rise to power, Grodd tried to have the Flash murdered.

Although seemingly defeated, Grodd would return again and again to seek his revenge against the Flash, sometimes alone, and sometimes with other villainous allies. After trying to take over Central City and enslaving its population, Barry eventually drags Grodd into the Speed Force itself, during which time Solovar takes over as King of Gorilla City and attempts to repair the apes' relationship with the human world. Grodd eventually escaped, becoming an ever present threat to the Flash family, and the entire world. 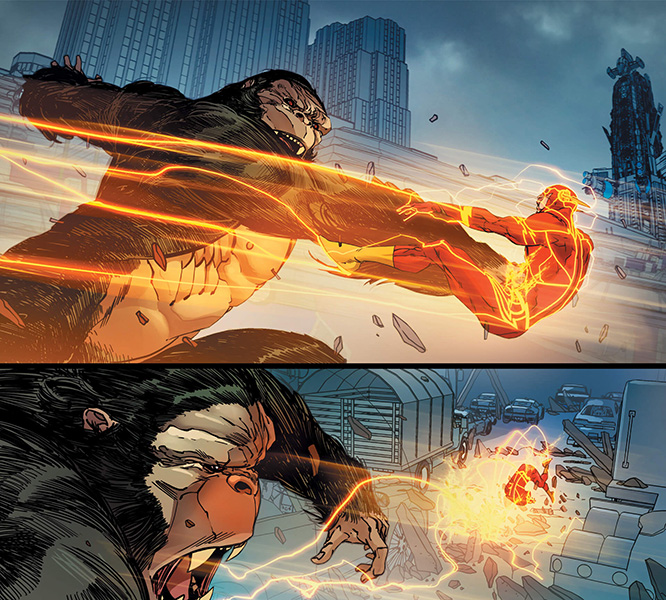 Grodd's mental powers grant him the ability to exert telepathic control over others, and even transfer his consciousness into other bodies, both human and ape alike. He has also exhibited other mental powers before, such as telekinetic abilities like force beams and telekinetic transmutation of matter, and has even created force fields with his mind on some occasions.

In more recent continuity, Grodd has shown he can absorb intelligence by devouring the brains of his victims, which also gives him access to all their memories. A genius level intellect, Grodd can master technology that most humans can barely understand, and has used this knowledge to create sophisticated and deadly weapons. Grodd also is physically far stronger than any ordinary gorilla.

In the post Flashpoint reality, Grodd, along with all of the other apes of Gorilla City, gained their hyper intelligence centuries ago from something they call The Light, which is what the Gorillas call the Speed Force from which the speedsters all derive their powers. This connection to the very thing that gives the Flash his super speed is also why Grodd can keep up with the Flash's movements, and even go toe to toe with him in a physical fight. 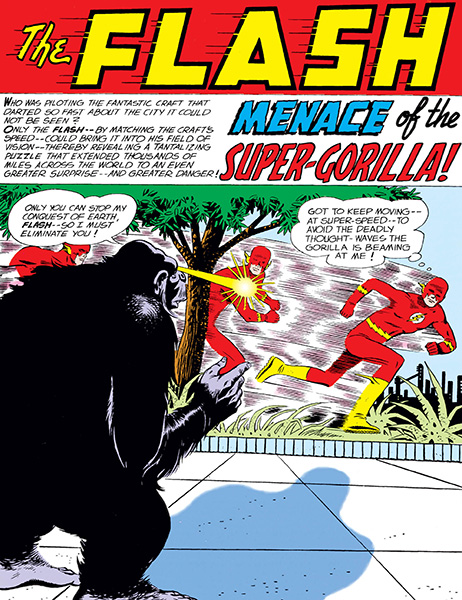 In the Flash's first encounter with Grodd, the hyper-intelligent simian comes to Central City, hoping to learn the secret of mind control from Solovar, another gorilla from the same hidden culture who is hiding among humanity by pretending to be a regular ape at the zoo. When Solovar asks the Flash for help, he defeats Grodd in Gorilla City, thus beginning a lifelong animosity between the two. 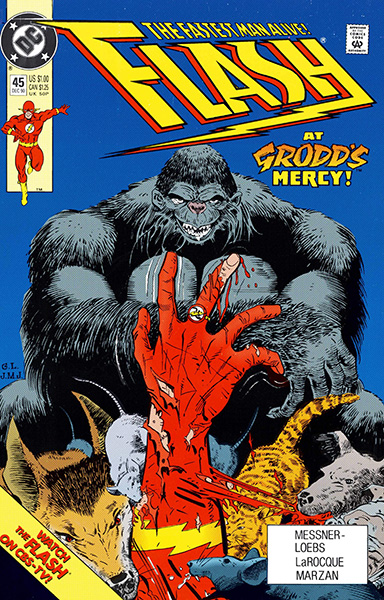 In one of his earliest battles with Barry Allen's successor as the Flash, Wally West, Grodd uses his mental abilities to increases the brain power of the local animals in Central City, hoping these newly intelligent beasts will follow his lead and turn on humanity for what he sees as their enslavement. But Grodd doesn't count on the pets being loyal to their human masters and not following him, and his plan is then thwarted by the Flash and his allies. 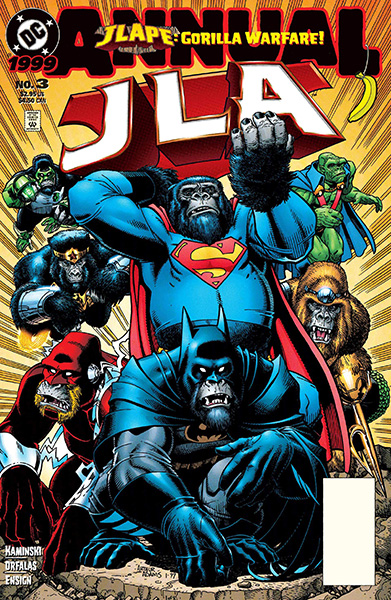 King Solovar of Gorilla City attempts to bring his people and humanity closer together, and travels to New York to petition for his people to join the United Nations as a sovereign country. But before he can address the General Assembly, a car bomb destroys his vehicle, killing him.

A group called the Human Supremacy Movement claims they are behind the attack, and war almost breaks out between humanity and the advanced apes of Gorilla City. It is ultimately revealed that Grodd is the one truly responsible, trying to create a war after which he himself would rise as the ultimate ruler. He is ultimately exposed and defeated by the Justice League. 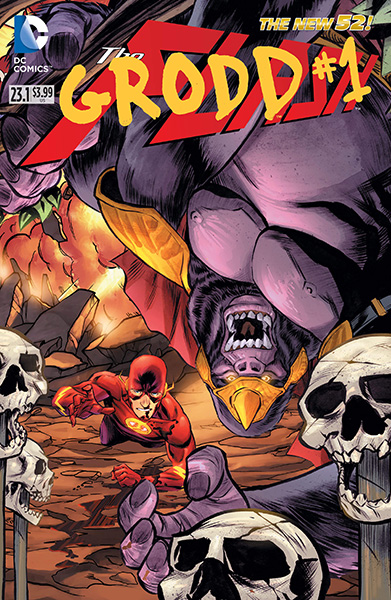 Following the events of 2011's FLASHPOINT, Gorilla Grodd takes advantage of the fact that Earth's heroes have vanished during the reign of the villainous Crime Syndicate, and he returns to Central City during a ceremony commemorating Flash, who is among those missing. Grodd, who is now exhibiting new powers, takes control of Central City as its king and renames it Grodd City. With no Flash or other heroes to fight however, Grodd simply becomes bored, and eventually gathers the rest of his loyal apes and they depart for parts unknown.

• Challenge of the Super Friends

• Batman: The Brave and the Bold - The Videogame