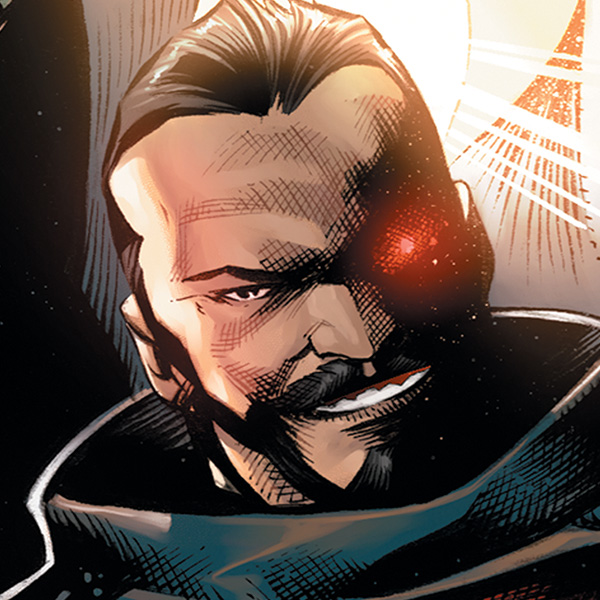 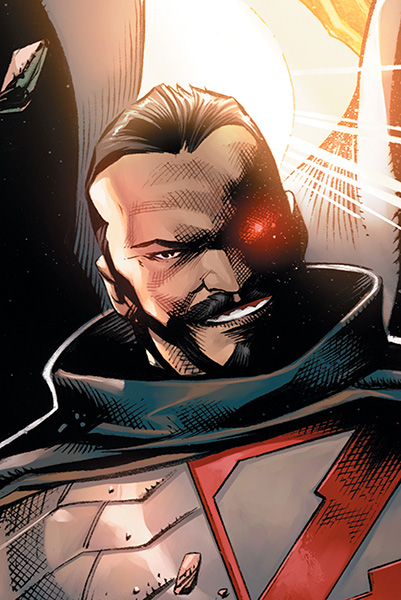 General Dru-Zod was imprisoned in the Phantom Zone for treason, but survived the destruction of Krypton and now demands the universe kneel before him.

General Dru-Zod was imprisoned in the Phantom Zone for treason, but survived the destruction of Krypton and now demands the universe kneel before him.

Once considered a military hero of the planet Krypton, General Dru-Zod decided he would rather rule his world than serve it. He launched a failed coup, after which he was exiled to the prison dimension known as the Phantom Zone. Krypton exploded and the years flew by, but the general remained safe and ageless in the Zone. Over the years he’s escaped time and time again, and used his Kryptonian powers to threaten Earth. All the while declaring that his enemy Superman will die—or kneel before Zod!

Dru-Zod was introduced in 1961, during the Silver Age of Comics. After defeating the terrorist Zo-Mar, who had taken over the Kryptonian military base Fort Rozz, Zod earned the rank of general (DC COMICS PRESENTS vol. 1 #84, 1985), and was later appointed director of Krypton’s space program. In this role, he met a brilliant young scientist, Jor-El, and his wife-to-be, astronaut Lara Lor-Van (WORLD OF KRYPTON vol. 1 #1, 1979).

Secretly, General Zod was more interested in conquest than exploration, or in protecting the people of Krypton. When he attempted to overthrow the ruling Science Council, he led a force of artificial duplicates of himself (all of which resembled Superman’s later enemy Bizarro). But Zod was defeated, arrested and exiled for 40 years to the Phantom Zone, the “twilight dimension” discovered by Jor-El that served as a prison for Krypton’s most dangerous criminals. In the Zone, Zod became an ageless, wraithlike being who could see the physical universe but couldn’t physically interact with it. Zod swore he would one day escape and conquer other worlds, as he believed was his right (ADVENTURE COMICS vol. 1 #283, 1961).

Following 1985’s continuity-altering CRISIS ON INFINITE EARTHS, Superman’s history was changed. Many years later a post-Crisis version of General Zod debuted. He was the descendant of Admiral Dru-Zod, and became the head of Krypton’s military guild. His second-in-command and lover Ursa led his elite Black Zero unit. Zod’s one major defeat came when he failed to keep the alien villain Brainiac from shrinking and capturing Krypton’s city of Kandor, imprisoning it and its citizens in a bottle (ACTION COMICS vol. 1 #866, 2008).

Not long after this defeat, Zod discovered the Science Council was covering up the scientific findings of scientists Non and Jor-El, findings that revealed Krypton would soon explode. Zod and Ursa defected from the military guild and joined Non and Jor-El’s cause. After the Council lobotomized Non, Zod decided he and Jor-El needed to overthrow it, but the scientist refused to believe a violent coup would solve things. Zod, Non and Ursa then attacked the Council, killing five of its members before they were stopped.

Jor-El argued for mercy and convinced the Council to exile the insurrectionists to the Phantom Zone. Zod considered Jor-El a traitor, swearing revenge on him and his son, Kal-El, who would one day become Superman.

A soldier for most of his life, Dru-Zod is a master combatant in excellent physical condition. He is an expert in military tactics, Kryptonian martial arts, firearms and melee weaponry, with a solid understanding of Kryptonian technology. Zod sometimes wears Kryptonian armor, which is impervious to conventional weapons.

As a Kryptonian, Zod’s cells process the radiation of a yellow sun in a way that grants him superhuman powers. His strength, speed, stamina and resistance to injury rival those of Superman. Zod can survive in the vacuum of space and withstand the pressure of the ocean floor. He can run several times the speed of sound and fly even faster. His power increases his memory and thought-processing speed, and his reaction time is automatically enhanced when he moves at superhuman speed. Compressing air in his super-strong lungs allows him to deliver ice attacks, a power called “freeze breath” or “arctic breath.” Zod heals several times faster than an Earth human, unless the injury is caused by something that interferes with his powers.

With yellow sun radiation, Zod’s senses are all expanded. He can shift his vision across the electromagnetic spectrum and, with focus, hear heartbeats across a city. He possesses telescopic vision, microscopic vision and “X-ray” vision (though lead and certain other materials will block this ability). Zod can directly release the solar radiation in his cells through his heat vision, delivering it from his eyes as fire, wide heat-ray blasts or focused lasers. Doing this causes him to drain his solar energy reserves more quickly. 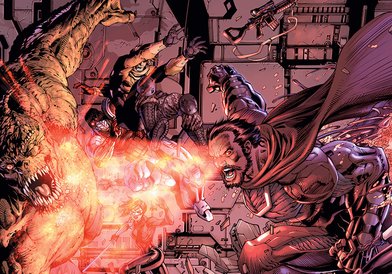 If Zod is fighting at full capacity for an extended period of time, he’ll start using up solar radiation in his cells faster than he can replenish it, and all of his powers will weaken. Certain types of radiation will interfere with his powers and health. Red solar radiation will shut off his powers. Green Kryptonite radiation will poison and weaken him until he finally dies. Magic-based energy has a disruptive effect on how Kryptonians process solar energy, so attacks and weapons using magical energy can injure Zod. Due to his enhanced senses, Zod is vulnerable to sensory-based attacks. 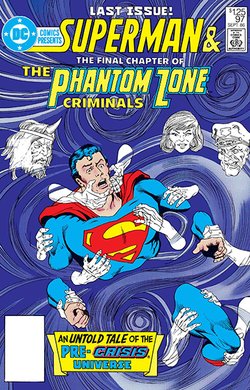 The original version of Zod made various escapes and attempted escapes from the Phantom Zone over the years. In all of these cases, Zod joined forces with other Phantom Zone criminals. One such attempt involved Zod and other prisoners projecting their thoughts to Jor-El, hoping to influence him into releasing them. But Jor-El’s wife, Lara Lor-Van, thwarted this plan (DC COMICS PRESENTS vol. 1 #97, 1986).

At one point the Green Lantern named Guy Gardner was accidentally exiled into the Zone. General Zod and the Phantom Zoners then tortured and brainwashed him (GREEN LANTERN vol. 2 #122-123, 1979).

In 1982’s PHANTOM ZONE limited series, Zod and the other Phantom Zone prisoners escaped and waged attacks across the Earth. They fought the Justice League to a standstill before Superman joined the battle (PHANTOM ZONE vol. 1 #1-4, 1982). Later the Phantom Zone was destroyed, releasing all its prisoners on Earth. Zod unleashed destruction on Washington, D.C. before Superman again defeated him (DC COMICS PRESENTS vol. 1 #97, 1986).

This version of Zod’s history was removed from DC continuity in 1985’s CRISIS ON INFINITE EARTHS.

After encountering a Zod from a parallel “pocket” universe and a dictator named Avruiskin, who ruled the country of Pokolistan and modeled himself after Zod, Superman finally met the real post-Crisis General Zod, a native of the planet Krypton. It was revealed that when Krypton exploded, the blast somehow caused a piece of the military fortress Fort Rozz to shift into the Phantom Zone. Within the walls of Fort Rozz, prisoners could become fully tangible again. Thanks to this, Zod and Ursa were able to interact and comfort each other during their long exile, and eventually they had a child, Lor-Zod. They eventually found a way to send Lor-Zod to Earth, using him as a catalyst to release all the Phantom Zone prisoners (ACTION COMICS vol. 1 #844-846, 2006-2007).

Clark Kent and Lois Lane looked after Lor, naming him Christopher, before General Zod led the Phantom Zone villains on an attack against Earth. With help from several heroes and villains, Superman sent the terrorists back into the Phantom Zone (ACTION COMICS ANNUAL vol. 1 #11, 2008). 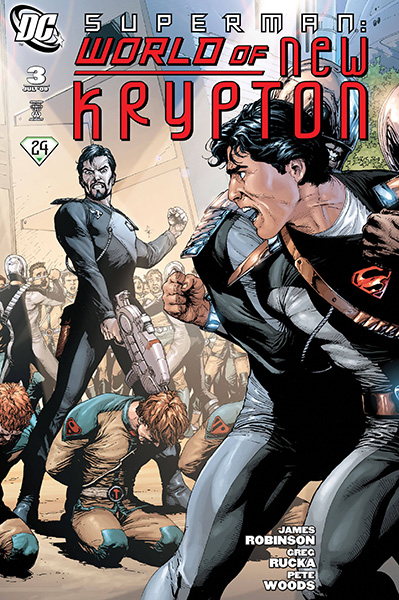 When the bottle city of Kandor was released from Brainiac’s imprisonment and restored, the newly freed Kryptonians only knew Zod as a hero and thus freed him from the Phantom Zone. To keep an eye on Zod, Superman joined the military guild (SUPERMAN: WORLD OF NEW KRYPTON #1-12, 2009-2010). After a 90-minute war erupted between Earth and the Kryptonians, Zod and his followers were sent back to the Phantom Zone (SUPERMAN: WAR OF THE SUPERMEN #0-4, 2010).

In 2011 much of DC’s history was reimagined as the New 52. In this new version of events, Dru-Zod was the son of two Kryptonian scientists. When maddened animals attacked him and his father during an expedition, Zod’s father was killed. Zod himself escaped, and then spent a year in the wilderness before being found.

This Dru-Zod became a colonel in the Kryptonian military. To justify war against an alien race called the Char, he faked attacks on Krypton. But his plan was exposed by Jor-El. He and his conspirators Faora and Non were then sent to the Phantom Zone, only to later escape and attack Earth, killing many before being defeated by Wonder Woman and Superman (SUPERMAN/WONDER WOMAN vol. 1 #3, 2014). Zod and Faora then escaped again, but a nuclear explosion sent them back into the Zone (SUPERMAN/WONDER WOMAN vol. 1 #4-6, 2014).

Since 2016’s DC Rebirth, Zod seems to have regained his Post-Crisis origin. Though he has still fathered Lor-Zod with Ursa, his later history is different. 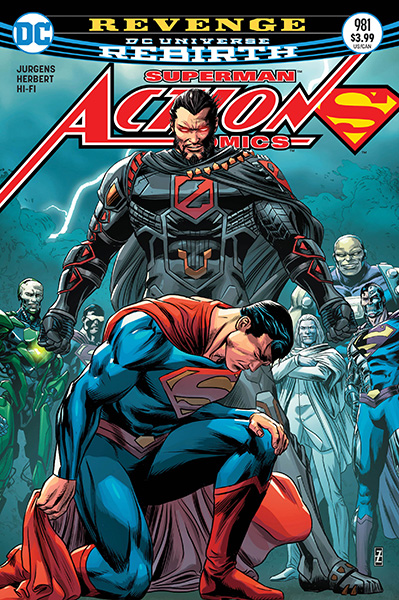 After escaping the Phantom Zone and fighting Superman, Zod wound up imprisoned on Earth for many years in a Phantom Zone sphere known as the Black Vault, a device that could act as a portal to the Zone (ACTION COMICS vol. 1 #981-984, 2017). The Russian government held the Black Vault in a lab, and the U.S. black-ops unit Task Force X (a.k.a. the Suicide Squad) later stole it. When the Squad accidentally released Zod, he was insane with rage and stood at nearly 10 feet tall due to the Vault’s energies (SUICIDE SQUAD vol. 5 #2-4, 2017).

Zod was then recruited into the new Superman Revenge Squad. On this team, he worked alongside the Kryptonian artificial intelligence known as the Eradicator, who hoped Zod would remold Earth into a copy of Krypton (SUICIDE SQUAD vol. 5 #17-19, 2017).

While the new Superman Revenge Squad made an attack on Superman, Zod freed Ursa and Lor-Zod from the Zone, evidently now meeting his son for the first time. With the Eradicator, the House of Zod then left Earth (ACTION COMICS vol. 1 #981-984, 2017). They found their way to Jekuul, another planet orbiting a yellow sun, and appointed themselves its new rulers after convincing the natives that they were gods (HAL JORDAN AND THE GREEN LANTERN CORPS Vol. 1 #37-38, 2018).