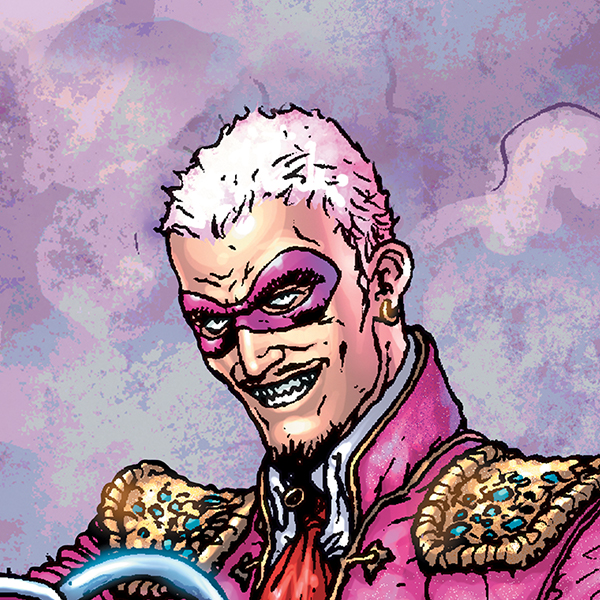 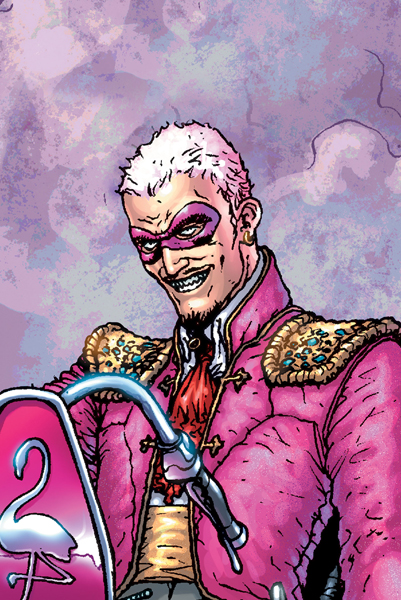 A flamboyantly dressed fallen hero who now kills for a Mexican drug cartel. Boasting a rather impressive record, his penchant for eating his targets’ faces can be overlooked by his masters.

A flamboyantly dressed fallen hero who now kills for a Mexican drug cartel. Boasting a rather impressive record, his penchant for eating his targets’ faces can be overlooked by his masters.

The rise of every great hero invites a dark opposite; a contrasting figure to stand for evil in the same fashion as their heroic inspiration upholds the values of the righteous. The flamboyant El Flamingo was designed as a warped reflection of one of the heroes who inspired Batman in the first place: the debonair, swashbuckling Zorro.

Perhaps it’s fitting, then, that when Flamingo first became active, there was a more suave Batman on the scene to counter his particular savoir faire: the Dark Knight’s original protégé, Dick Grayson.

Favoring rifles and motorcycles, El Flamingo was once a vigilante not unlike his masked inspiration who fought the drug cartels of his home country — until the day he was beaten and captured by the El Penitente drug cartel, and lobotomized by their leader, the enigmatic Simon Hurt, into becoming their greatest enforcer. His morality cut out of him, El Flamingo became more monster than man, removing and eating the faces of the people the cartel would send him to kill.

When anti-drug vigilantes Red Hood and Scarlet struck against the cartel, they dispatched El Flamingo to their Gotham hometown to remove their problem. As a testament to his skill, El Flamingo nearly had Red Hood and his young sidekick beaten before a timely intervention by the ersatz Batman and Damian Wayne — allowing Red Hood the opportunity to eliminate his enemy for good… or so he believed. (BATMAN AND ROBIN #4-6, 2009)

Even if El Flamingo had perished, the reality-warping events of 2011’s Flashpoint resigned his fate to Arkham Asylum. Though he’s spent most of his time since his debut bout within Arkham’s walls, like most super-villains in Gotham he’s enjoyed a number of escapades in the outside world before a swift apprehension. With the fall of Simon Hurt and the Penitente Cartel, El Flamingo was now a free agent. His client list has included the likes of Cluemaster, who dispatched him against Cluemaster’s own daughter, Stephanie Brown — better known to Gothamites as Spoiler. (BATMAN ETERNAL #27-28, 2014) Most recently, El Flamingo entered a deadly motorcycle race on the Isle of Harm, where the winner would receive the answer to any question they desired. His chief opponent: the original Batman who ended his reign of horror, Dick Grayson. (NIGHTWING #48-49, 2018)