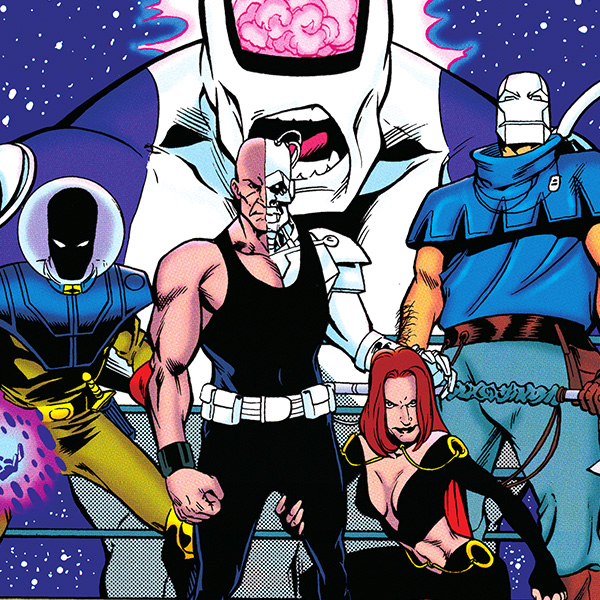 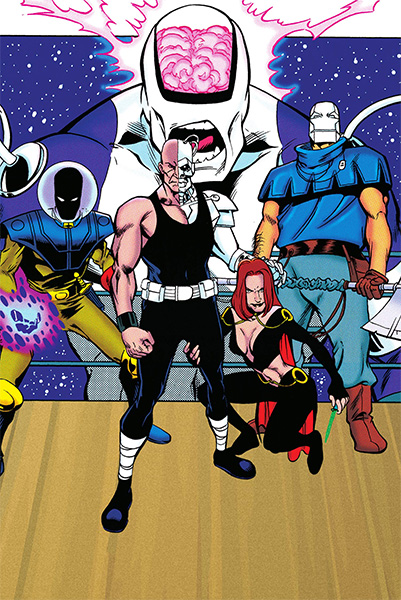 A thorn in the side of the Legion of Super-Heroes, this team of 31st century super-villains has also terrorized the 21st century.

A thorn in the side of the Legion of Super-Heroes, this team of 31st century super-villains has also terrorized the 21st century.

The Legion of Super-Heroes has faced many deadly enemies over the years, but perhaps their deadliest are the quintet of criminals known as the Fatal Five. And unlike the other villains they have battled, the Legion itself is actually responsible for the formation of this terrifying team. When the powerful Sun-Eater threatened the galaxy, the Legion knew that it was something too big for them to face off against alone. While watching a Science Police documentary on “The Fatal Five,” five of the universe's most vile criminals, the Legion decided to bring them on to help defeat the Sun-Eater. Although they helped the Legion win the day, the five villains decided to stay together as a team and have been a thorn in the Legion's side ever since.

The primary members of the team are the Emerald Empress, Mano, the Persuader, Tharok and Validus; although other members have filled in for one of the five founders on different occasions. Despite operating primarily in the Legion's 31st century time frame, the Fatal Five have also wreaked havoc in other historical time periods, facing off against the likes of the All-Star Squadron, the Justice League, the Outsiders, and many others. But the Legion of Super-Heroes has remained their primary adversaries, and the Fatal Five will never rest until they've brought the Legion, and the entire United Planets, to its knees. 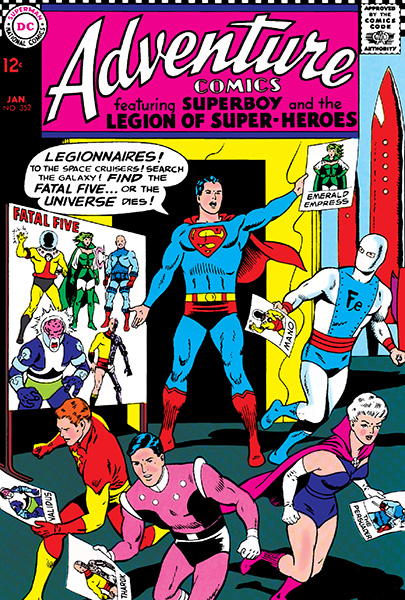 During the late 30th Century, the Milky Way was threatened with destruction by the powerful Sun-Eater. The United Planet's primary defenders, the teenage Legion of Super-Heroes, knew they would need help to destroy this lethal menace. While watching a Science-Police documentary about the greatest criminals in the United Planets, they came across five of the very worst, who had been given the nickname "the Fatal Five."

Among them were the Emerald Empress, also known as Sarya of the planet Venegar, who held command over the powerful and mystical Eye of Ekron; Mano, a mutant from the planet Angtu who could disintegrate anything that he touched with his right hand; Persuader, who wielded an atomic ax; the super-strong behemoth known as Validus; and their leader, the cybernetic man called Tharok. These five criminals helped the Legion save the galaxy from the Sun Eater's threat and were given full pardons for their assistance. However, they rejected the offer to go straight, instead joining forces to try to subjugate the worlds of the galaxy.

Over the years, the Fatal Five has remained the biggest threat the Legion of Super-Heroes has faced. Although the team has mostly remained the five original core members, over time, there have been substitute members like Flare, a Rimborian who had pyrokinetic abilities; Caress, whose touch was acid, the monstrous Mordecai, and Mentalla, who was really a hero who had infiltrated the team as a way of impressing the Legion and gaining membership. Despite their formidable powers, the Legion kept finding ways of defeating them, and sending them to the prison planet of Takron-Galtos.

In the post-ZERO HOUR continuity, the Fatal Five's history was revealed to be very similar to their counterparts in the previous reality, and were also brought together to help the Legion defeat the Sun Eater. During a team up with the 21st Century heroes the Teen Titans, the Legion faced off against a super charged version of the Fatal Five, when Persuader used the power of his atomic axe to bring different versions of the Fatal Five from across the Multiverse, forming the Fatal Five Hundred. The Legion eventually found a way to use the Cosmic Treadmill to send the alternate Fatal Fives back to their original universes. During the multiversal event known as the LEGION OF 3 WORLDS, the villainous Superman Prime included the Fatal Five in his ultimate version of the Legion of Super-Villains. 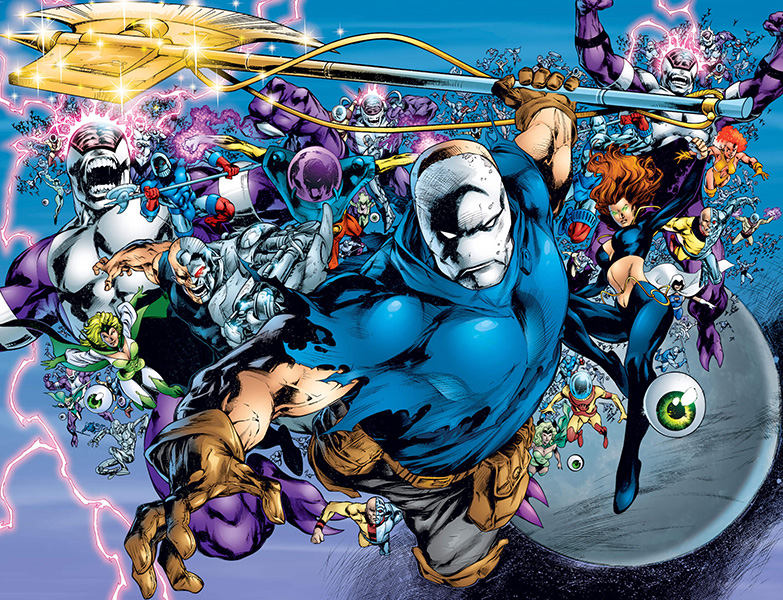 Each member of the Fatal Five has a unique and lethal ability, which makes the team even more deadly when used in concert with one another. The Emerald Empress controls the mystical Eye of Ekron, which can channel immense energies, and was once part of a super powerful being named Ekron. Mano has the power to disintegrate whatever he touches with his right hand, which he refers to as his "anti-matter touch."

The Persuader has an Atomic axe which can cut through virtually anything, and Validus is a giant creature with superhuman strength and near-invulnerability, and who can wield energy projection powers straight from his mind. But the most deadly member is the cyborg Tharok, whose intelligence was boosted significantly by cybernetic enhancements. It is with Tharok's deadly mind that the Fatal Five have come so close to defeating the Legion time and time again.

In their very first appearance, the various criminals are brought together by the Legion of Super-Heroes, as a ways of defeating the deadly Sun Eater, which is ultimately brought down by Andrew Nolan’s, a.k.a. Ferro Lad’s, noble sacrifice. Although granted pardons by the UP for their help, they decided to stay a team and attempt to take over the galaxy. 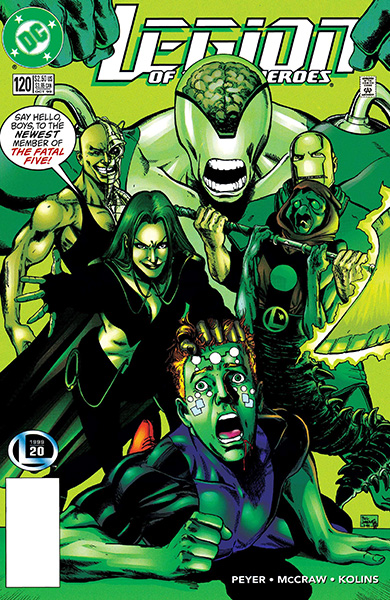 The post-ZERO HOUR legion makes themselves known in this story, which finds them facing off against a newly enhanced Brainiac 5.1. But even this more powerful Brainy finds himself at the mercy of the Persuder's atomic ax. 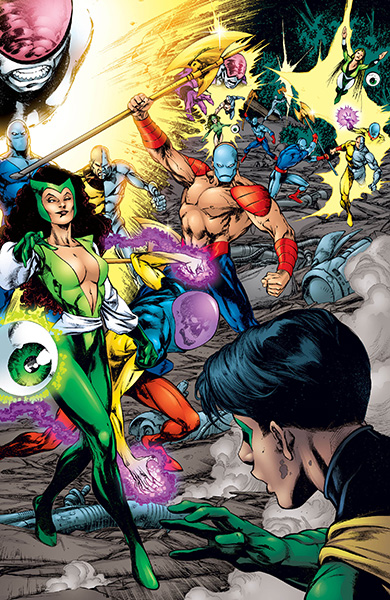 When Superboy Conner Kent of the Teen Titans journeys to the 31st century and battles alongside his other team, the Legion of Super-Heroes, they stand together against the Fatal Five Hundred. This team is created when the Persuader finds out that his atomic ax can cut through the cosmic barrier between realities, and thus brings together hundreds of versions of the Fatal Five.