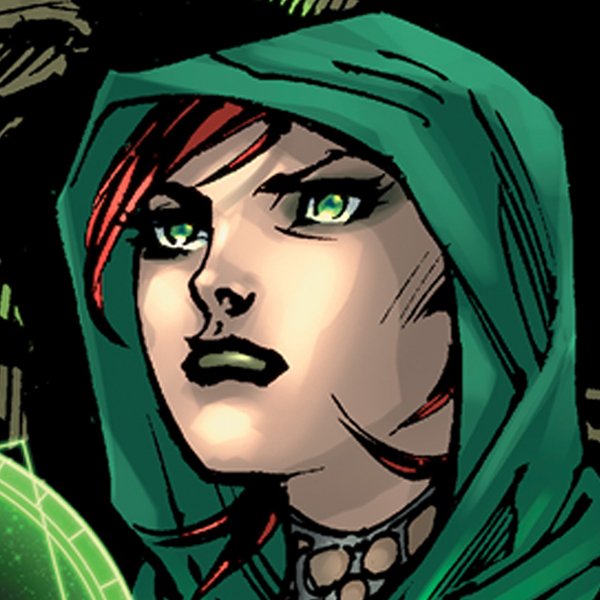 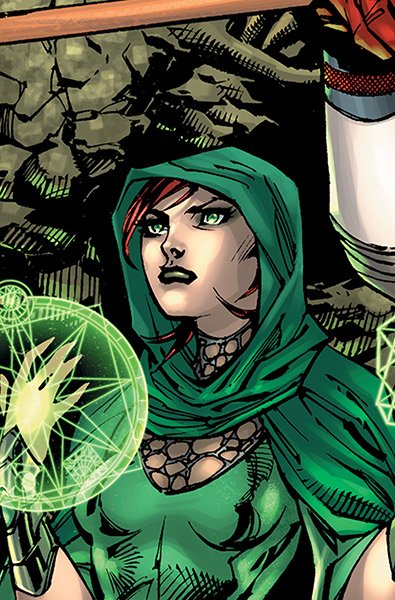 The Suicide Squad's most tragic member, June Moon has been both blessed and cursed to play host to a supernatural entity.

The Suicide Squad's most tragic member, June Moon has been both blessed and cursed to play host to a supernatural entity.

When mild-mannered June Moone inadvertently opened herself up to possession by a powerful magical entity known as the Enchantress, her life was forever changed. Upon speaking the words "The Enchantress," June transforms from her mortal self and completely succumbs to Enchantress' parasitic whims—which are often as powerful as they are uncontrollable.

Despite her perpetual fear of losing control to the entity, June has made every attempt to harness the powers of the Enchantress and use them for the greater good. With help from other powerful magic users and the less-than-gentle guidance of Amanda Waller, June found a place for herself and the Enchantress in Justice League Dark, Shadowpact and the Suicide Squad.

Still, the risk of forever losing herself to Enchantress' arcane magic is something June faces every time she allows the entity to transform her. There will come a day, she fears, when the danger posed by her supernatural abilities will outweigh the reward of being a DC Super Hero.

June's possession by the Enchantress was an accident. After she attended a costume party thrown in a haunted mansion, known as the “Terror Castle,” June stumbled into a mysterious chamber. It was within this chamber that she first encountered a magical being called Dzamor who granted her magical powers. But the powers came at a cost.

By speaking the words "The Enchantress" June would transform and forfeit her will as she was forced to take a back seat in her own body. Initially, the Enchantress was helpful, saving the lives of the people around her when various magical threats presented themselves. But things quickly took a dark turn, as the Enchantress' lust for power became more and more uncontrollable.

June grew to fear the entity inside her and tried to avoid transformation at all costs, concerned that she may never be able to regain control again. 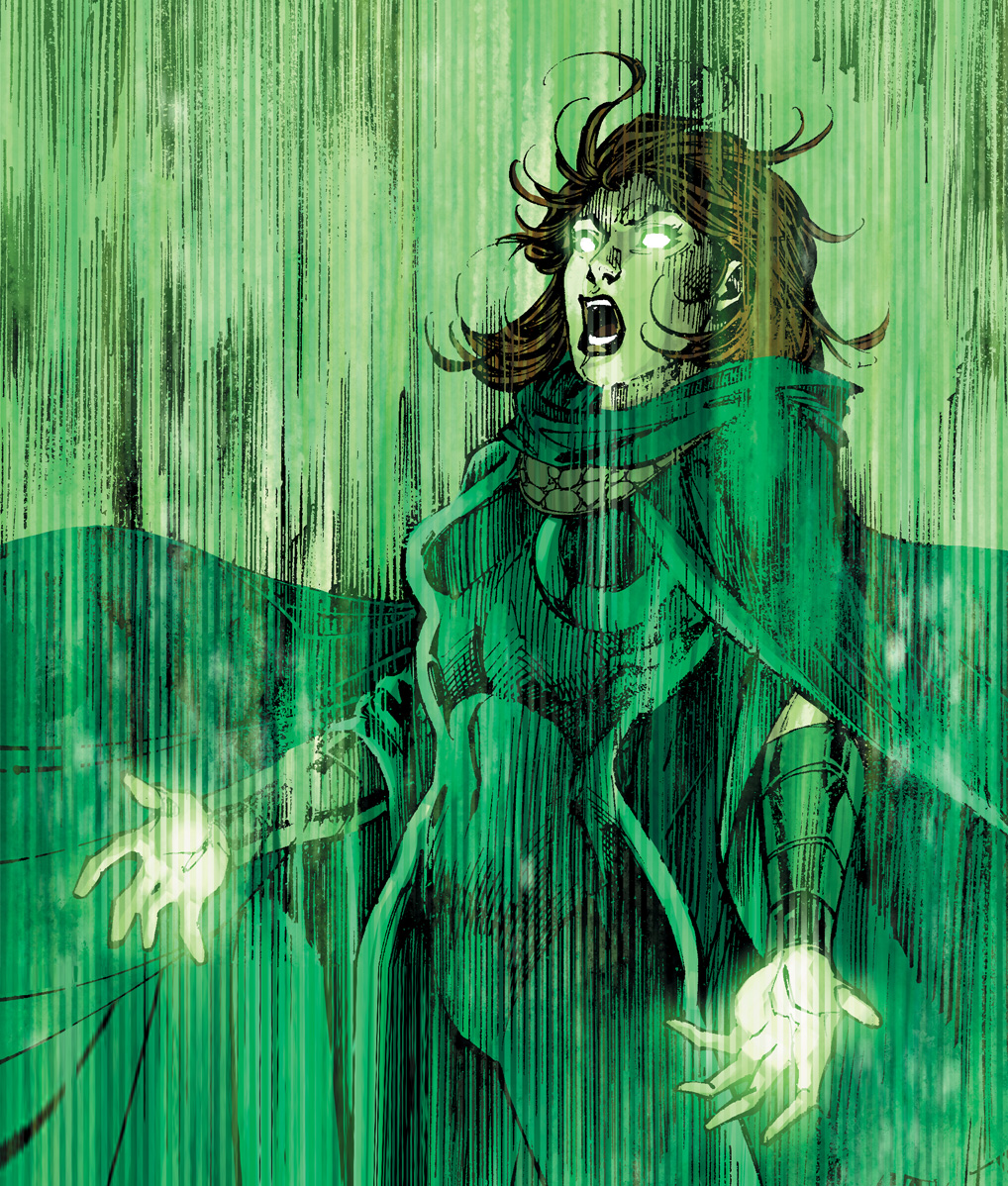 The Enchantress is a potent magic user with virtually limitless powers. She has the ability to conjure terrors, manipulate minds, teleport and fly. She has enhanced strength and endurance and accelerated healing, and has been shown to summon demons and illusions at will.

June Moone is a human with no metahuman abilities. 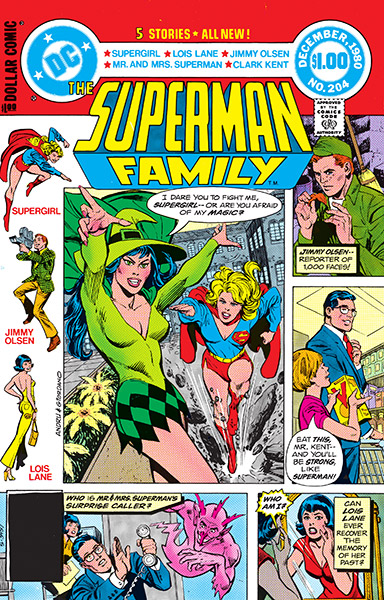 After several heroic turns as Enchantress, June found herself increasingly succumbing to the entity’s darker impulses. This led to the Enchantress taking control and attempting to gain more power for herself through an ancient ritual that involved astral alignment.

Enchantress argued that the power she would gain was for the greater good, but disregarded the fact that the ritual would cause untold environmental destruction and risk the lives of people in the area. Fortunately, Supergirl (Linda Danvers) was able to stop Enchantress from completing the ritual by kicking the moon out of astral alignment.

After this confrontation, Enchantress became even more dangerous and power hungry, sparking her slow spiral from Super Hero to Super-Villain.

June was eventually contacted by Amanda Waller to join Task Force X. June joined the Suicide Squad of her own free will hoping that the team would help her control the Enchantress, and believing that they would be able to subdue her if she lost control.

June remained with the Squad, despite the continued risk to her personal safety, and eventually revealed she could feel the Enchantress growing stronger each time she was released. This culminated in disaster on a mission to Moscow, where the Enchantress went on a rampage and nearly sparked an international incident, forcing Deadshot to subdue her.

Eventually, the Squad enlisted the help of Madame Xanadu to help June learn to control her powers. Xanadu warned that June was, essentially, a mystical atom bomb waiting to explode. She gave June a necklace and ring that would help her to control the Enchantress and her abilities, but with one caveat—that June and the Enchantress might wind up merging into one entity. 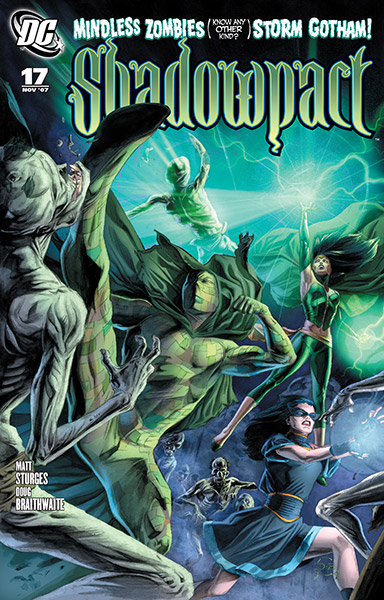 Following the corruption and subsequent madness of the cosmic entity known as the Spectre, the spirit of vengeance, June joined the Shadowpact, a group of mystics who set out to fight him.

Exhibiting more control than she had in the past, June was able to finally channel Enchantress' abilities for good, helping trap the mind of the demon Eclipso and save the Spectre—and ultimately the world—from a complete collapse into chaos.

Enchantress continued to work with the Shadowpact against mystical and cosmic threats until the team was disbanded.

After the events of 2011’s FLASHPOINT, both June Moone and Enchantress were slightly reimagined. In their first appearance in the new continuity, June had been physically separated from Enchantress, allowing the entity the unlimited use of her powers.

2016’s DC UNIVERSE: REBIRTH #1 returned June to the Suicide Squad where she currently serves under Amanda Waller. June has struck up a romantic relationship with one of her teammates, Waylon Jones, a.k.a. Killer Croc.