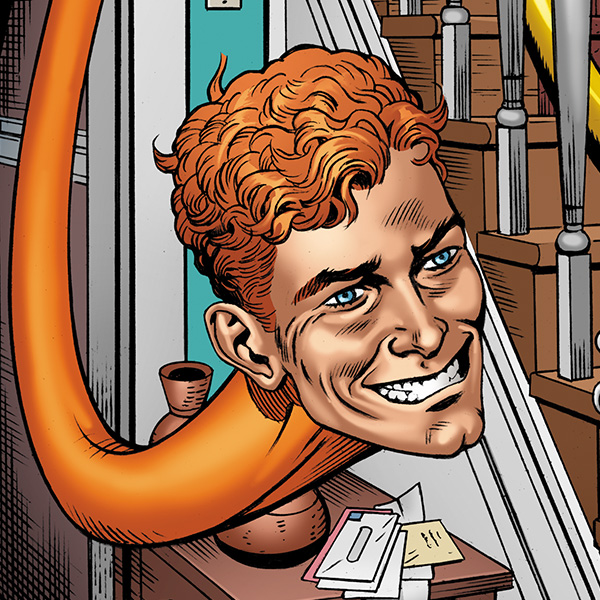 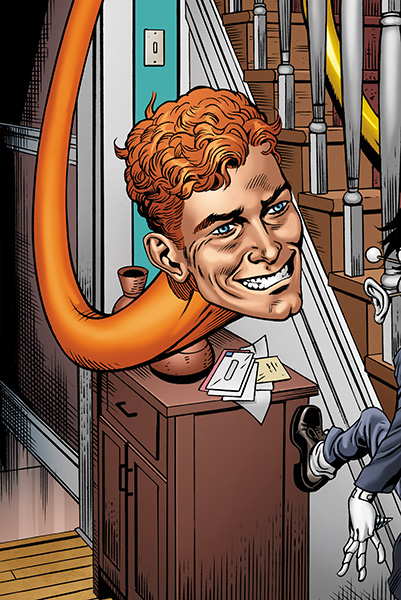 When stretchable sleuth Ralph Dibny smells a mystery, he and his wife and partner Sue are on the case.

When stretchable sleuth Ralph Dibny smells a mystery, he and his wife and partner Sue are on the case.

He may not always get the recognition he deserves, nor are his powers as sexy as those of many other DC Super Heroes, but the hero known as the Elongated Man has been a fixture of several incarnations of the Justice League over the years, and one of the planet's stalwart defenders. Ralph Dibny gained the powers of incredible elasticity when he ingested a concentrated form of a rare substance called gingo. Discovering he could stretch his body at will, He soon became a crime-fighting partner to Barry Allen, a.k.a. The Flash, and later, joined the Justice League of America, staying with the team through several line-up changes. Along with his JLA teammate Batman, Ralph is also one of the DC Universe's greatest detectives, and his favorite catchphrase is "I smell a mystery!" – something he often said while twitching his rubbery nose.

Elongated Man was one of the first Super Heroes to share his true identity with the general public, and also one of the few who had a stable and long-lasting relationship, with his wife Sue, who was often his partner is solving mysteries. Sue even became an unofficial member of the League herself. The Elongated Man and Sue's long honeymoon came to end, however, when Sue was shockingly murdered. This sent Ralph into a spiral of depression that ultimately resulted in his also losing his life. Reuniting on the other side, Ralph and Sue became a pair of "ghost detectives," solving cases from beyond the grave, now together forever. Thankfully, in the post-FLASHPOINT timeline, Ralph is still alive, and still the Elongated Man. 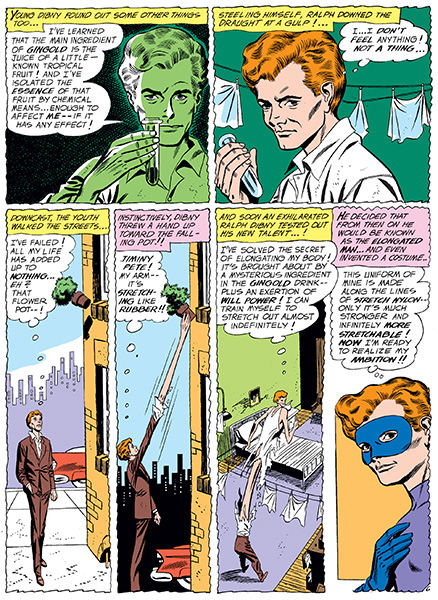 When Ralph Dibny was a young man, he found himself obsessed with the "Indian Rubber Men" he saw at various carnivals and sideshows. Desperately curious about just how their powers of contortion worked, Ralph eventually found out that they all drank a soft drink brand called Gingold, which contained gingo, a rare fruit from the Yucatán, one which most people were severely allergic to, but which gave those who could stand it more elastic skin and limbs. Ralph then found a way to distill the gingo fruit down to its raw form, and once he ingested that, he gained the powers to stretch his body in all kinds of forms.

Soon after gaining his abilities, Ralph ended up moving to Central City and becoming a costumed Super-Hero, and started calling himself the Elongated Man. As long as he took a new dose of the gingo extract every few days, he could maintain his powers. Once in Central City, Ralph became close friends and crime fighting partners with Barry Allen, the second Flash. During his early years as a costumed hero, Ralph learned to become an amazing detective, despite not being formally trained, and doing everything on instinct.

Despite wearing a mask early on his heroic career, Ralph decided to reveal his secret identity to the public, being one of the very first DC Super Heroes to ever do so. Becoming a wealthy celebrity from his nationwide public appearances, it was during one of those that that Ralph met and fell in love with a woman named Sue Dearbon, whom he later married. Together, Ralph and Sue becoming a mystery solving pair of globetrotting detectives, a kind of married Holmes and Watson.

Ralph joined the Justice League of America during their most formidable years, when they were operating out of a satellite in Earth's orbit. Elongated Man stayed with the team when they shed many of their most powerful members and moved their base of operations to Detroit, and then joined the European branch of the Justice League International. Always, his wife Sue was at his side. After the JLI broke up, Ralph had some adventures in Opal City with Starman, and fought alongside his friend Barry's successor as the Flash, Wally West. He rejoined his JLI teammates when they got back together and called themselves "the Super Buddies," and even had a brief stint in the Doom Patrol.

Ralph's charmed life hit a brick wall when his wife Sue was murdered. Not being able to cope with the loss of the love of his life, Ralph became hellbent on finding a way to bring her back to the land of the living. He stops taking the gingo extract, therefore losing his powers, but goes on a quest all over the world to find a way to reunite with his lost wife by going to every magic user and wizard he could find. Ultimately however, he discovered he could only reunite with Sue one way – by dying himself.

Now reunited with the love of his life on the other side, Ralph and Sue became a pair of ghostly detectives, helping solve Earthy crimes, only from beyond the grave. Only Batman has been able to deduce that Ralph and Sue are possessing different living bodies to interact with people on the physical plane. Although their spirits had moved on, Ralph's body was desecrated when it, along with Sue's, was resurrected as a member of the Black Lantern Corps during the event known as the Blackest Night. The Black Lantern Ralph even killed Hawkman and Hawkgirl, but when the Black Lantern Corps was defeated, Ralph's body returned to the grave.

In the post-Flashpoint DC Universe, Ralph and Sue were never killed. He shows up during an adventure involving the Secret Six. It is not revealed if this version of the Elongated Man was ever a member of the Justice League. 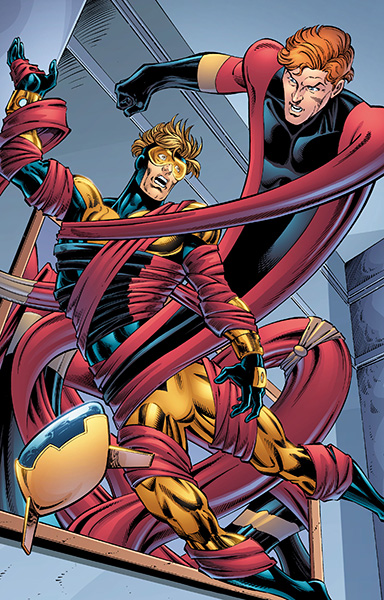 Elongated Man has the ability to stretch his limbs and body to incredible lengths, as well as to alter his body to different sizes. With the stretching powers granted to him by the gingo extract, he can alter his body into different shapes, and can even contort his face to appear like someone else, even though this is painful for him and difficult to maintain. His powers are similar to fellow stretchy hero Plastic Man, but also more limited, as he has a limit to how far he can stretch and the kind of shapes he can become, and Plastic Man seems to have less limits on his powers. 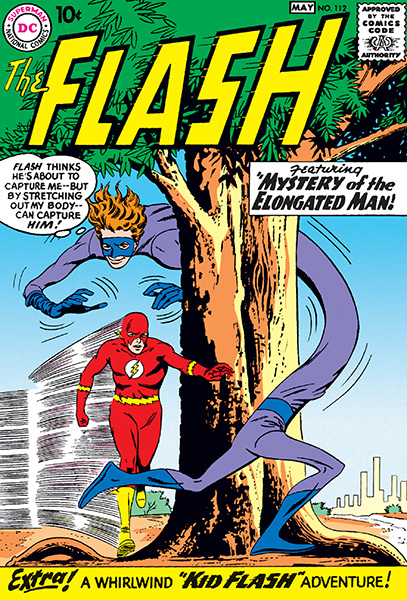 In his first-ever appearance, the Elongated Man gives the Flash a run for his money as Central City's newest Super Hero. At first the Flash thinks that Elongated Man is a phony, and actually thinks he is responsible for a series of crimes in the city. But when Elongated Man leads him to the real criminals, the two become fast friends and soon after often fight crime together. 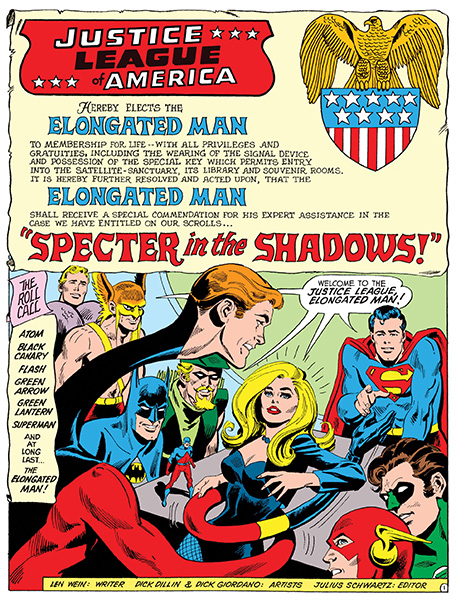 After several years of being a costumed adventurer, Elongated Man is formally accepted into the Justice League of America as their newest member. On his first adventure with the team, Ralph helps the JLA stop a group of criminals who are pliable "putty people" similar to him. He infiltrates their ranks and pretends to be one of them, only to help the League defeat them, proving his worthiness to become a member. 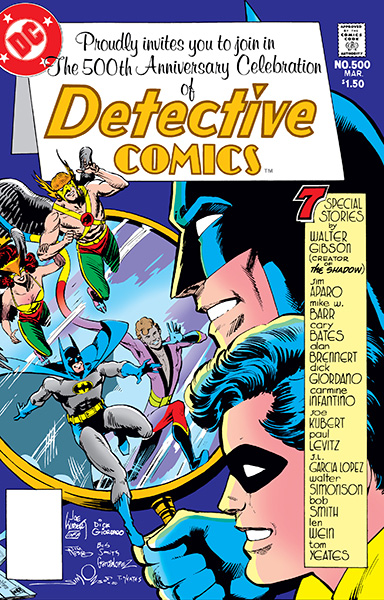 After appearing in a series of back-up stories in the pages of DETECTIVE COMICS over the years, the Elongated Man and his wife Sue become embroiled in one of the strangest cases of their investigative careers, as they discover a lost magazine edited by the creator of the modern detective story, the great Edgar Allan Poe. 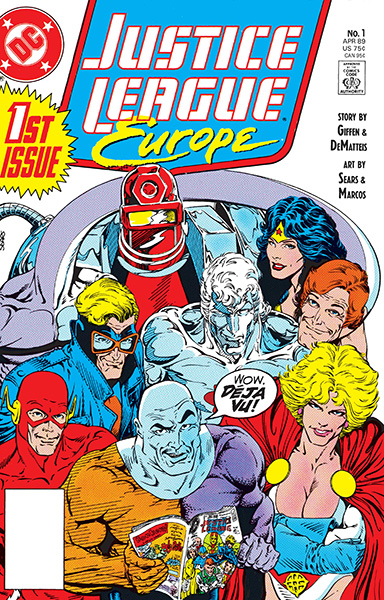 When the United Nations branches off the Justice League International into embassies all over the globe, a permanent team is placed in Paris, France, and Ralph and Sue become charter members of the Justice League Europe. One their first day of operation, a former Nazi dies on the JLE's doorstep, creating a new mystery for Ralph to solve. 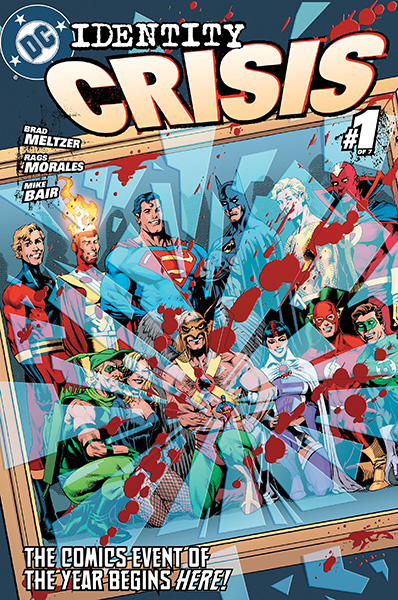 In a shocking turn of events, shortly after finding out that Sue has become pregnant, Ralph comes home to find her murdered, and her body mutilated and burned. Assuming the murderer is Dr. Light, who years before sexually assaulted her, Sue's killing leaves Ralph a broken man, and one willing to do whatever it takes to bring his wife's killer to justice. 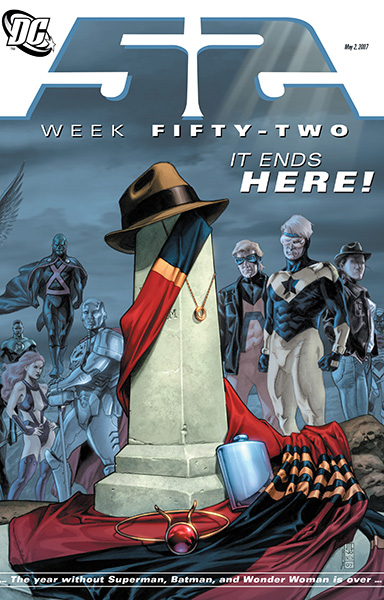 After a long search across the globe that takes him a whole year, consulting with powerful sorcerers and wise gurus, Ralph ultimately reunites with his wife Sue when he himself dies. But after the grueling year long journey, the pair are revealed to be "ghost detectives," spirits solving crimes in the corporeal plane, proving that even death can't bring an end to the Elongated Man's heroism.

Following the events of 2011's FLASHPOINT, much of DC history was reimagined, and neither Ralph nor Sue were ever killed (although it is unknown if he was ever a member of the JLA). He first appears in this new timeline as a rogue member of the Secret Six, using the name "Damon Wells," also known as "Big Shot." In this disguise, Ralph reports to the Riddler, who is the secret leader of the team. When Ralph is eventually reunited with his wife Sue, he once again becomes the Elongated Man.