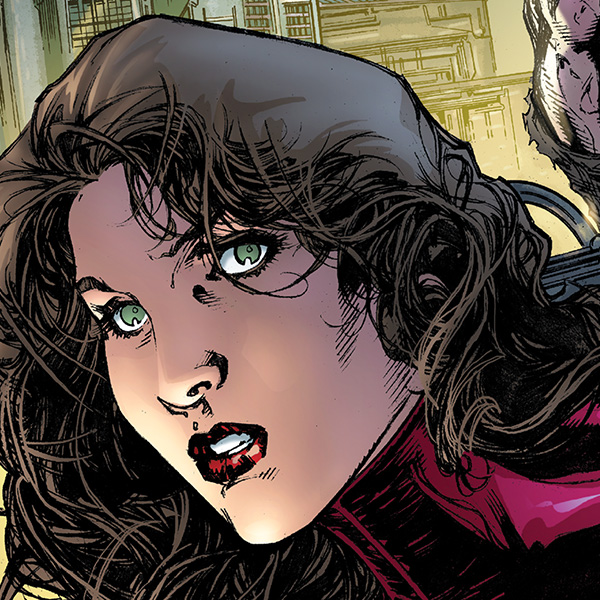 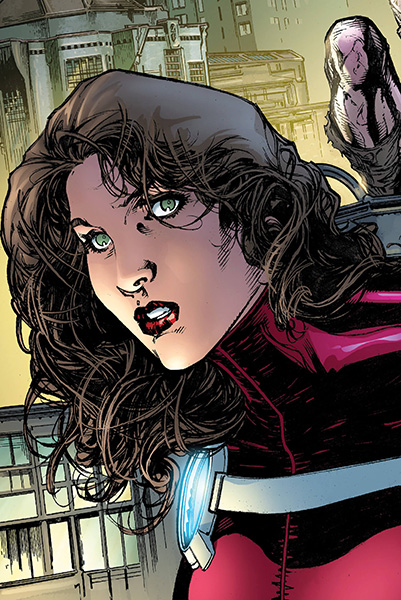 Actress and Olympian Rita Farr was exposed to toxic gases that granted her the amazing ability to change her size and shape.

Actress and Olympian Rita Farr was exposed to toxic gases that granted her the amazing ability to change her size and shape.

One of the founding members of the original group of Super-Hero outcasts known as the Doom Patrol, Rita Farr lead a charmed life, first as an Olympian athlete, and later, as a movie star. But fortune would stop smiling on her when one day, she was involved in an accident that gave her incredible powers that allowed her to alter the size and shape of her body. Not being able to control these new abilities, Farr was now labeled a freak, and found new life as a hero when Dr. Niles Caulder recruited her for his team.

With the Doom Patrol, Rita found a new purpose in life, and a new extended family with her teammates Robotman and Negative Man. She met and fell in love with the billionaire Steve Dayton, who became the Super-Hero called Mento so the pair could become a crime fighting couple. When Rita gave up her life to save strangers she never met, she cemented her legacy as one of the all-time bravest heroes of the DC Universe. Although she remained dead for many years, when various cosmic circumstances altered the fabric of reality, Rita Farr was once again alive and also a hero once more, fighting the good fight alongside the other heroic freaks and weirdos of the Doom Patrol.

Rita Farr found fame and fortune early in life, when she became a Gold Medalist swimmer in the Olympics, and then parlayed her newfound fame to start a career as a Hollywood actress. Appearing in several "chiller features," her films became box office hits, and were among the favorite movies for heroes like the Martian Manhunter. Her glamourous lifestyle would end however, when one day while shooting a film on location in Africa, she became exposed to strange volcanic gases. These gases altered her physiology, and she could now expand or shrink her body at will, from being inches high to growing up to several hundred feet tall. Initially, she doesn't have great control of her powers, but once she gained greater control, she eventually she discovers she can even enlarge one limb at a time.

Now seeing herself as a freak, and her acting career effectively over, Farr becomes a recluse, rarely spotted in public. It is during this time that Dr. Niles Caulder, also referred to as the Chief, recruits Rita to become one of the founding members of his group of Super-Hero outcasts he calls the Doom Patrol. Rita finds a new lease on life as the Super-Hero Elasti-Girl, and her teammates become her new family. During this time, billionaire Steve Dayton proposes marriage to Elasti-Girl, and even becomes a Super-Hero himself under the name Mento. The super couple's wedding was even attended by the Justice League and the Teen Titans. Farr and Dayton eventually adopt orphan Garfield Logan, who would become future Teen Titan known as Beast Boy. But these happy times were sadly not to last.

The end came for Elasti-Girl when the Doom Patrol's most dangerous enemies, the Madame Rogue and Captain Zahl, threatened to kill everyone is a small New England fishing village. The Doom Patrol all elect to sacrifice themselves to save the group of innocent strangers who lived in that town, and are seemingly killed in a massive explosion. It is later revealed that all of Rita's teammates actually survived that day, and only Rita was actually killed in the explosion. But due to several multiversal upheavals, this was not the end of Rita Farr's story.

After Rita's death, the Doom Patrol reform in many different incarnations over the next several years. It is ultimately revealed that her teammates Robotman, Negative-Man and the Chief all survived what appeared to the world to be their untimely deaths. When Robotman goes to seek evidence of her possible survival, he finds the remains of Rita's body under the sea, along with her wedding ring, thereby giving up all hope that she somehow lived. The Doom Patrol continued on, honoring Rita's memory.

Then, the cosmic interference of the being known as Superboy Prime altered the history of all reality, allowing all the original members of the Doom Patrol to be reintroduced into the DC Universe, with all their past history was seemingly erased. That meant that Rita Farr was alive once again, and she had no memory of her life in the previous timeline, where she had died. Her heroic origins remained the same however, as she was once again a star athlete who became a famous actress, and suffered an accident which resulted in her gaining powers.

When the events knows as the Infinite Crisis happened, Superboy-Prime broke the Phantom Zone barrier while in battle with the Teen Titans and their heroic allies. At that moment, all of the members of the Doom Patrol were able to remember their previous lives that had been wiped from the timeline. Suddenly, Rita now remembered everything, including her husband, her having an adopted son, and even her own death.

After the Multiverse was reborn due to the events of the Infinite Crisis, Rita Farr's presence in the Doom Patrol is explained in a new way. With her original history restored, Rita still died several years ago. The Chief had managed to salvage a piece of Elasti-Girl's skull, and used his scientific skills to regrow her entire body, which was possible due to its malleable form. Because of the process which brought her back, Elasti-Girl became a more docile and suggestible person, and was reluctant to ever question Dr. Caulder. During this time, she changed her Super-Hero name to Elasti-Woman.

The Chief suggested to her Doom Patrol teammates that her malleable form impaired her ability to think properly, which resulted in this new personality which deviated from the way Rita had been in her previous life. All of this lead to her lack of personal initiative, which made her dependent upon Caulder. While observing Rita's interaction with the Chief, Teen Titan Tim Drake began to suspect that Dr. Caulder had in fact brainwashed her. It turned out that this Rita was actually not the original Rita returned from the dead, but a clone of her.

At the same time, Rita discovered that her husband Steve Dayton was using the powers of his Mento-helmet on her, believing she would never love him without its powers. Rita confronts Dayton over his mental manipulation of her, and when he once again attempts to use his mind control powers to force her to love him, she almost kills him. Although Rita stops herself from harming Dayton, their marriage is now officially over.

In the wake of the Flashpoint event, the DC Universe timeline was heavily changed once more. In this new reality, the Doom Patrol was once again introduced to the world as the original team of Robotman, Negative Man and Elasti-Woman, all under the leadership of the Chief. All of their previous history was seemingly erased, including Rita's death and resurrection.

This version of Elasti-Woman first appeared when the Doom Patrol went on a mission to capture the mysterious artifact from another universe called the Power Ring, which had attached itself to a young troubled woman. During this mission, it was revealed that Rita's accident which gave her powers, as well as all of the accidents of her fellow Doom Patrol members, were all caused by Dr. Niles Caulder in the first place. 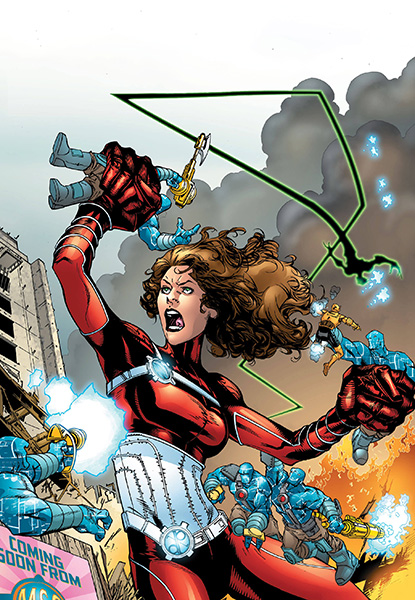 Rita Farr's body was forever changed when exposed to mysterious volcanic gases, resulting in her ability to expand and shrink her body. These powers allow her to become as tall as a building, or to reduce her size to mere inches. On one occasion, she was even able to shrink down to a microscopic size and enter a sub-atomic universe, but she was never able to use her powers to this extent ever again. As Rita mastered her powers over the years, she discovered she could selectively shrink or expand individual parts of her body.

During the era when she was mysteriously resurrected prior to the events of the Infinite Crisis, Elasti-Girl could also change the size of objects and people by touching them, after which they would revert to their normal size once she released them (this power disappeared after the Multiverse was reformed). Due to her unique physiology, Rita can regenerate any part of her body, including re-growing severed limbs or fixing damage to any part of her skin.

In her most recent incarnation, it was revealed that when Dr. Caulder regrew her after her death, the method he used was able to eliminate all "weaknesses" such as her bones and internal organs, meaning that Rita 2.0 wasn't really even human anymore. When this version of Rita sleeps, she loses her human shape and reverts to a puddle of goo, having to remold herself into human form every day when she wakes up. 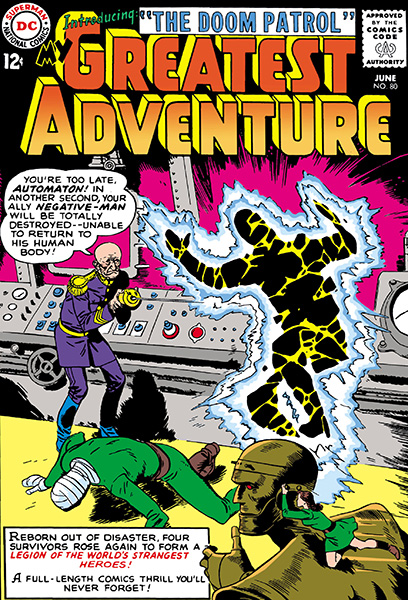 In his very first appearance, Elasti-Girl is introduced as a member of the Doom Patrol, when the Chief recruits her for his super team of freaks and disfigured outcasts. Rita explains her tragic backstory to her new teammates, and together they face their first mission facing alien invaders who have come to Earth, curious about our expanding nuclear abilities. 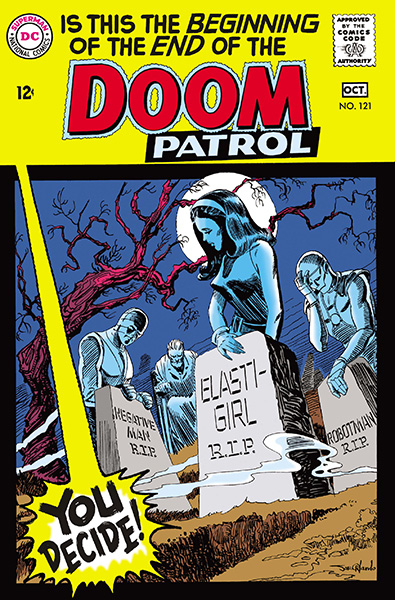 Rita Farr and her Doom Patrol teammates sacrificing their lives to save a small town full of strangers occurred in this story, in what was an unprecedented move for comics at the time. When Madame Rouge and Captain Zahl force the team choose between saving their own lives or those of the tiny town of Codsville, Maine, Rita and her friends offer their lives in exchange for that of the townsfolk. Although her fellow Doom Patrolers would all be revealed to have escaped death, Rita would remain the only member of the team to have actually died in this story. 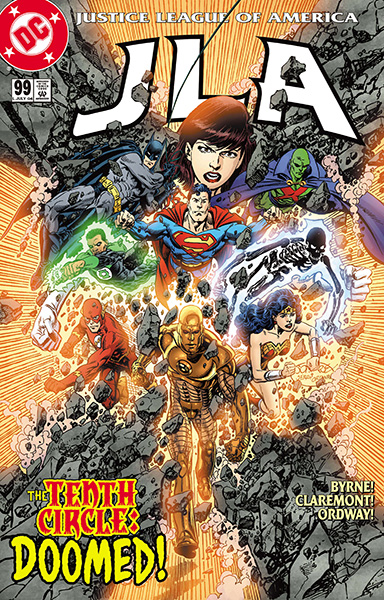 This Justice League story is the reintroduction of the original Doom Patrol into the DC Universe, with their previous history seemingly wiped out (revealed years later to be due to Superboy Prime). In this story, Elasti-Girl is once more a founding member of the Patrol, who are introduced to the world when they team up with the Justice League to defeat a secret cabal of vampires called the Tenth Circle. 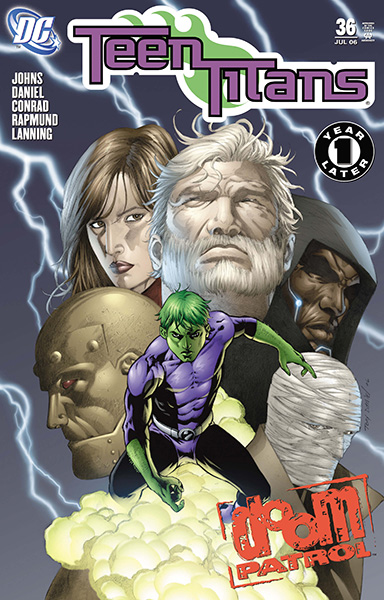 The Patrol's original history is restored due to the aftermath of the Infinite Crisis, and now a new Rita Farr is introduced, calling herself Elasti-Woman. This version of the team is introduced in a Teen Titans storyline where Beast Boy's connections to the Doom Patrol are expanded upon, including that of his adopted mother Rita Farr. This storyline reveals that Rita was "regrown" using the original's DNA, and came back more than a bit different, with a lot of her previous personality discarded. 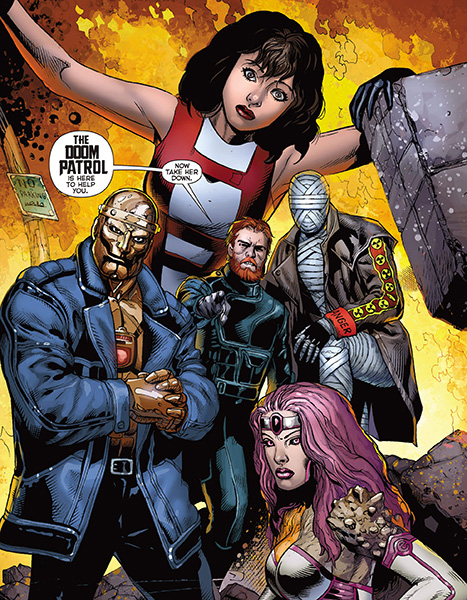 With the DC Universe timeline rebooted once again due to the effects of Flashpoint, the original Doom Patrol were reintroduced again as all-new heroes. Rita Farr first appeared in this new timeline when the Doom Patrol went on a mission to capture the mysterious Power Ring from Earth-3, which had attached itself onto a woman named Jessica Cruz.

During this mission, it was revealed that Rita's accident which gave resulted in her gaining powers, as well as all of the accidents of her fellow Doom Patrol members, were all caused by Niles Caulder in the first place. Despite the revelation, she continues to serve with the latest incarnation of the Doom Patrol.