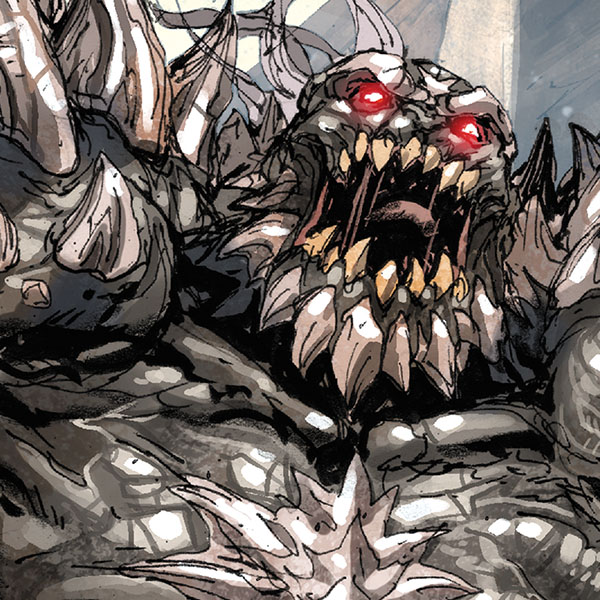 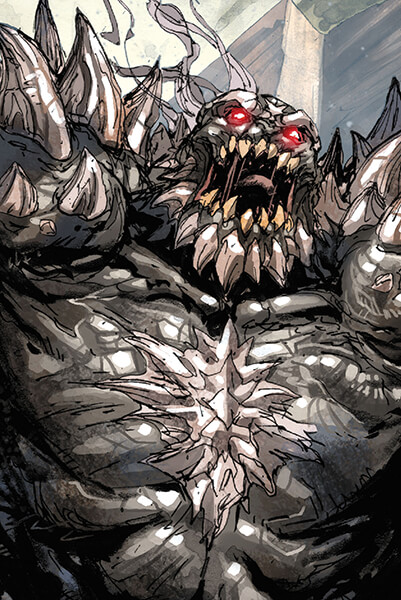 A weapon crafted in the most extreme conditions imaginable, Doomsday is an ultimate and unstoppable force of destruction and devastation.

A weapon crafted in the most extreme conditions imaginable, Doomsday is an ultimate and unstoppable force of destruction and devastation.

Aliases: The Ultimate, The Armageddon Creature

Long ago, scientists on the planet Krypton engineered a creature to be the ultimate weapon. This creature, the Ultimate, had no purpose except destruction, and made his way across other planets before finally being defeated. Buried on the primitive planet Earth, he stirred awake after many centuries and unleashed death, earning himself the name Doomsday. The monster was finally stopped by Superman, who seemingly lost his own life in the process. Driven by an instinct to hunt the inhabitants of his own homeworld, Doomsday has resurfaced time and time again to threaten Superman and his adopted planet—no matter what gets in his way. 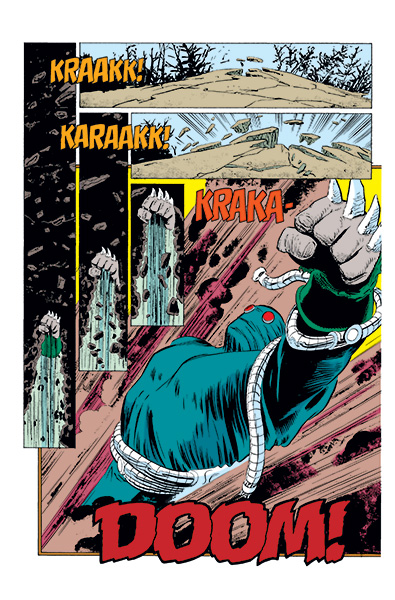 Nearly 250,000 years ago in Krypton’s past, a scientist named Bertron (not a native of Krypton himself) began genetic experiments with a team of fellow scientists he’d assembled, intending to create a perfect biological weapon. His test subject was an infant he’d brought from another world and exposed to the natural dangers and predators of Krypton. The infant did not survive long. Bertron had the infant’s remains examined and, after adjusting its genes slightly, created a clone. This process repeated every day for decades, allowing Bertron and his scientists to simulate and direct the effects of millions of years of evolution in a relatively short span of time (SUPERMAN/DOOMSDAY: HUNTER/PREY #2-3, 1994).

This creature, “the Ultimate,” became a powerful biological weapon of destruction that could seemingly survive any environment, as well as any attack. Driven by an instinctive hatred for the native life on Krypton, he spent a few years hunting and killing local predators. Then, somehow understanding that Bertron was responsible for his dying repeatedly, the Ultimate returned to the lab that created him and killed everyone. Soon afterward a supply spaceship arrived, having been arranged by Bertron. The monster boarded it and used it to leave Krypton (SUPERMAN/DOOMSDAY: HUNTER/PREY #2, 1994).

The Ultimate, who also earned the name “Armageddon Creature,” made his way to other planets, killing many innocents and warriors, including members of the Green Lantern Corps (DOOMSDAY ANNUAL #1, 1995). He was finally defeated on the planet Calaton by an artificially created being called the Radiant. Had his body been destroyed there, Doomsday would have died. But the people of Calaton instead placed his body in a cage and buried it underground on the planet Earth (SUPERMAN/DOOMSDAY: HUNTER/PREY #2, 1994). 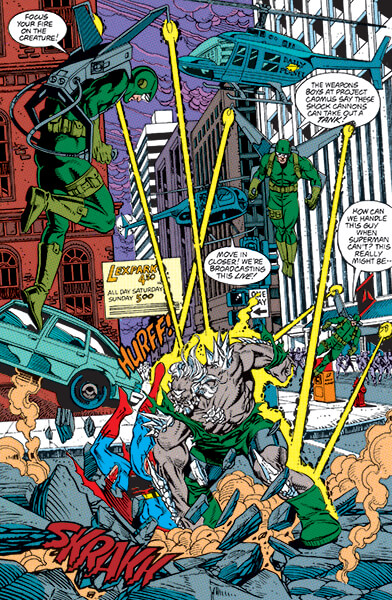 Doomsday has strength, resistance to injury and stamina on par with Superman at full strength. This makes him impervious to conventional Earth weapons. He is also resistant to many forms of energy attacks. In one story, he withstood Darkseid’s destructive Omega Beams.

It is often difficult for telepaths to read Doomsday’s mind, as usually his thoughts are completely occupied by an overriding compulsion to destroy—and when dealing with his enemies, by fighting instincts. But Doomsday is not immune to telepathic attack, and he has been mentally controlled more then once (though each time he has been able to resist when given enough time).

Doomsday has both an endoskeleton and a partial exoskeleton, providing him natural armor over parts of his body, as well as claws. These exposed bones and claws are capable of slicing and piercing the body of even a super-powered Kryptonian. On one occasion, Doomsday was able to project his claws from his body and deliver venom through them.

On at least one occasion, Doomsday demonstrated heightened senses. Doomsday also has enhanced speed. Though his speed doesn’t match Superman’s, he is still much faster and more agile than most beings of his size and mass.

With his super-strength, Doomsday can leap into the air from a standing position at least a couple of miles at a time. This allows him to cover great distances quickly.

Doomsday has the ability to evolve and adapt his body to resist new forms of attack. After dying at the hands of Imperiex and being brought back to life by Lex Luthor’s genetic engineering, Doomsday became less resistant to attacks from enemies such as Superman, and was vulnerable to Kryptonite.

Doomsday does not need food, water or oxygen to survive. How he sustains himself is not clear, but it’s possible he feeds on ambient radiation and energy around him, much like how Superman draws energy from solar radiation. 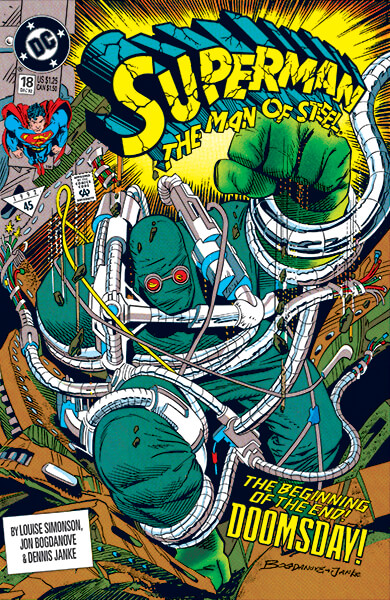 Over thousands of years, the Ultimate regenerated from the wounds he sustained in his battle with the Radiant on the planet Calaton, and then finally stirred awake (SUPERMAN: THE MAN OF STEEL #17, 1992). With some effort, the monster freed himself and began marching across the United States, killing and destroying whatever he came across.

The Justice League of America tried to stop the monster and failed. The hero Booster Gold, wondering if this beast was a biological weapon, referred to him as “Doomsday,” and the name stuck (JUSTICE LEAGUE AMERICA #69, 1992). After Doomsday defeated and hospitalized several Super Heroes, he came to Superman in the streets of Metropolis (SUPERMAN #75, 1993). The two fought until they apparently beat each other to death, then both fell.

But Doomsday wasn’t dead. He simply needed time to recover. Months later the monster revived and events sent him to the planet Apokolips. There he fought both Darkseid and Superman, and his full origin was revealed (SUPERMAN/DOOMSDAY: HUNTER/PREY #1-3, 1994). This battle resulted in Doomsday being exiled to the end of time. He was then rescued by Superman’s enemy Brainiac, who used telepathy to possess the creature’s body. Brainiac was driven from Doomsday by a psi-blocker and the monster was once again imprisoned, this time in a feedback loop between different teleporters (SUPERMAN: THE DOOMSDAY WARS #1-3, 1999).

When the cosmic villain Imperiex attacked Earth, Lex Luthor (then president of the United States) had Doomsday released so he could be used as a weapon. After killing Luthor’s version of the Suicide Squad, Doomsday fought Imperiex’s forces until the villain reduced him to a skeleton unable to regenerate again. Doomsday was now truly dead (ADVENTURES OF SUPERMAN #594, 2001). 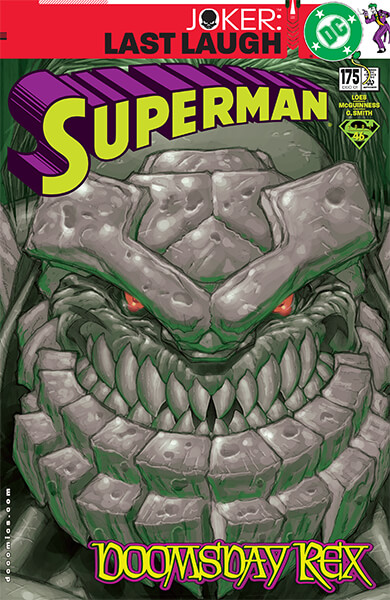 After the conflict with Imperiex was over, Lex Luthor recovered Doomsday’s skeleton and used advanced technology to bring back the monster, as strong as ever, but more vulnerable and with a weakness to Kryptonite so he would be easier to control. Doomsday was then further altered when The Joker introduced his own chemicals into its biology. When he awoke, Doomsday remembered his past life and blamed Luthor for sending him to his death by Imperiex. He also now had greater intelligence and the ability to speak.

Superman fought this reborn Doomsday, realizing that the monster’s new intelligence also brought with it the capacity for pain and fear. Compared to their previous meetings, Superman was now able to defeat Doomsday easily (SUPERMAN #175, 2001).

Lex Luthor gifted Doomsday to Darkseid, who in turn had duplicates created. These fearsome but noticeably less powerful duplicates were released onto Themyscira, the home of the Amazons, as part of a plan to kidnap and corrupt Supergirl (SUPERMAN/BATMAN vol. 1 #10, 2004). Eventually Doomsday returned to Earth and realized he now had the potential for compassion and other emotions, and even briefly aided Superman against an enemy. But he returned to his murderous ways, encouraged by other Super-Villains and mentally controlled at one point by Dr. Psycho (INFINITE CRISIS #7, 2006).

Some time later, Lex Luthor created other clones of Doomsday, including a cyborg version called Doomslayer. They fought the Justice League of America before being destroyed by the Kryptonian artificial intelligence known as the Eradicator, who used Doomsday himself as a weapon against these new clones (ACTION COMICS #904, 2011). 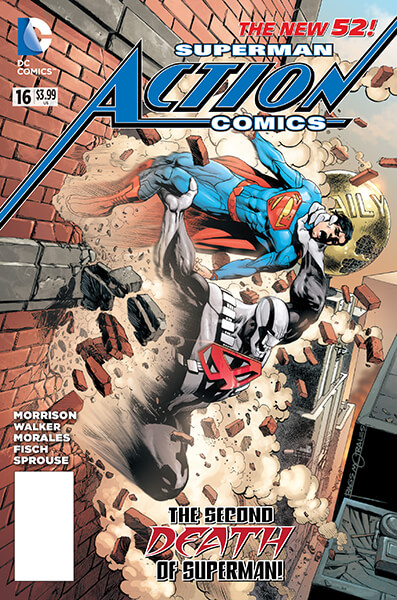 Following the events of 2011’s FLASHPOINT, Doomsday’s origin was reimagined so that he suddenly appeared one day on Krypton, a few years before the planet’s destruction. Military leader Dru-Zod (a colonel at the time) defeated the nameless beast (BATMAN/SUPERMAN #3.1, 2013). Zod later implied he had the monster created and/or was responsible for him being unleashed on Krypton as part of a plan to shock the planet’s society out of complacency and to make its people strong again.

Decades later, the creature somehow resurfaced and came to Earth, where the media dubbed him Doomsday. He battled Superman in Metropolis, apparently killing him, only for the hero to revive later. Superman defeated Doomsday and exiled him to the Phantom Zone (ACTION COMICS #16-18, 2012).

Doomsday occasionally resurfaced, but was sent to the Phantom Zone again (such as in SUPERMAN/WONDER WOMAN vol. 1 #1, 2013). After escaping one more time, he evolved and released spores into the air that would poison others or alter them to become similar creatures. Deciding that his rule against killing did not apply to Doomsday because he was mindless, Superman destroyed the monster (SUPERMAN: DOOMED #1, 2014). 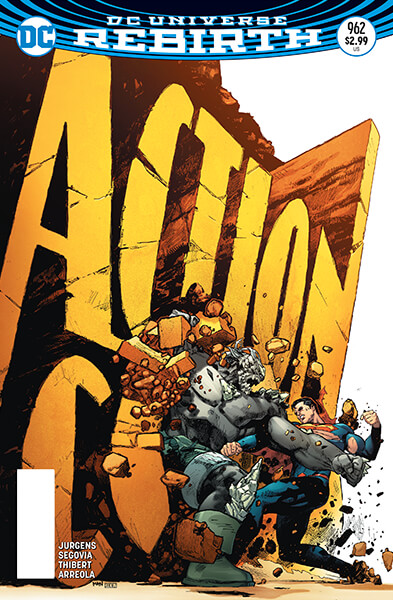 Following the events of 2016’s DC UNIVERSE: REBIRTH #1, much of the pre-New 52 history regarding Doomsday has been restored. Doomsday appeared in Metropolis once again, beast-like in his behavior again but still intelligent enough to rationalize basic strategies against his opponents and predict attacks. After another battle, Superman exiled Doomsday to the Phantom Zone yet again. But the monster was then taken by the villainous Mr. Oz (ACTION COMICS #692, 2016).