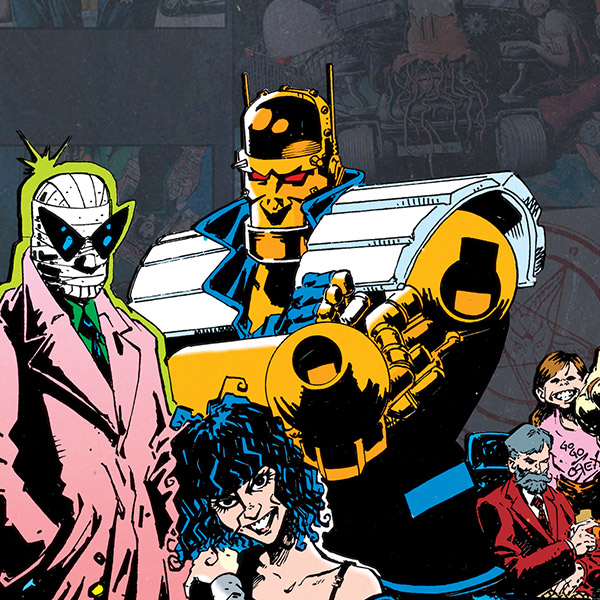 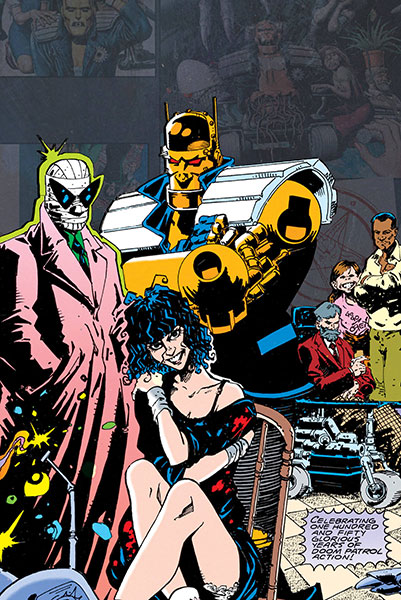 Born of experiments and accidents, and outcast from society, the Doom Patrol occupies the weirder corners of the universe.

Born of experiments and accidents, and outcast from society, the Doom Patrol occupies the weirder corners of the universe.

For some, super powers are anything but a blessing. The Doom Patrol, appropriate to their rather dire sounding name, are a group of DC Super Heroes who, for one reason or another, have found themselves struggling against the expectations, judgement, and constraints of a society that may not always understand them or their gifts. And for that, they've often found themselves pushed to the margins.

They don't always get along and they're not always saving the day, but the members of the Doom Patrol -- including founding members Robotman, Elasti-Girl (now Elasti-Woman), and Negative Man, and The Chief -- have found a family in each other. One that lets them focus their accidental abilities and unwanted powers in a way that benefits themselves and their world.

Doctor Niles Caulder, otherwise known as The Chief, took it upon himself to bring a group of three metahuman individuals together and convince them that their pereceived disabilities were, rather than cause for self-pity, best viewed as an opportunity to save the world. These metahumans were Cliff Steele, a man who had "died" when his body was destroyed in a car wreck, only to be saved when his brain was placed into a robot body; Rita Farr, an all-star athlete and actor who was exposed to chemicals that allowed her to change her size and shape; and Larry Trainor, who became charged with radioactive energy that allowed him to project a negative energy "soul" from his body.

As Robotman, Elasti-Girl and Negative Man, the three, at The Chief's urging, joined forces and formed the Doom Patrol, a group of heroic adventurers. 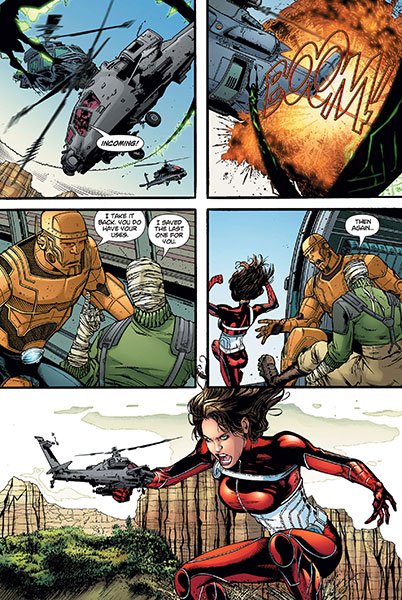 The Doom Patrol functions predominantly outside the prying eyes of society at large. Though not necessarily a secret organization, they're less public than other, more prominent Super Hero teams in the DC Universe. Because of their roster of outcast heroes with esoteric abilities, the Doom Patrol is ideally suited to handle more offbeat threats to humanity. Thus they often find themselves going up against villains more unusual than those faced by the Justice League.

The Doom Patrol also often gravitates towards problems that can further their understanding of themselves. Each member joined the team because they felt pushed out of society in one way or another, and for many of them the Doom Patrol has become a family in a very literal sense.

The group's founding members consisted of Robotman, Elasti-Girl, and Negative Man, as well as their leader The Chief. Elasti-Girl has the ability to change her physical size and shape at will, though she must constantly face the danger of losing focus and transforming into an amorphous blob. Thanks to his mechanical body, Robotman possesses enhanced speed, strength, endurance, and senses, as well as the power to generate extreme heat though heating coils. He has recently gained the ability to fly. Negative Man can project a negative energy soul that is unbeholden to most physical constraints. Though confined to a wheelchair, The Chief possesses a genius-level scientific intellect. 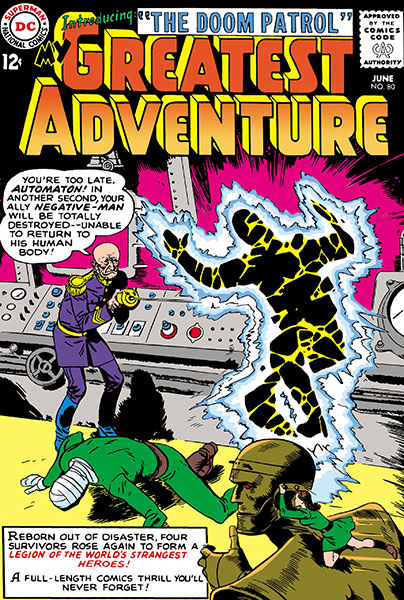 The Doom Patrol first appeared in 1963's MY GREATEST ADVENTURE #80. This title transitioned to an ongoing DOOM PATROL series after issue #86, which featured the misadventures of Robotman, Elasti-Girl, Negative Man, and The Chief as they faced off against such eccentric rogues as the Brotherhood of Evil, Madame Rouge, and General Immortus.

Gar Logan, a.k.a. Beast Boy, joined the team's ranks in DOOM PATROL #99, after the Doom Patrol rescued him from a conspiratorial plot by Gar's erstwhile guardians to use his transformative abilities for profit. Gar was eventually legally adopted by Elasti-Girl and her husband, Steve Dayton, a.k.a. Mento.

1968's DOOM PATROL #121, however, would prove to be the title's last issue. In it, the team was killed off in a plot by one of their recurring villains, Madame Rouge. With the population of a small town in Maine at risk, the Doom Patrol elected to sacrifice themselves rather than allow the innocent civilians to die, no matter how cruel those innocent civilians may have been to them in the past.

In 1977, the team was "resurrected" in SHOWCASE PRESENTS #94, which revealed that Robotman had, in fact, survived the explosion; and that a woman named Celsius, who claimed to be Niles Caulder's widow, was reforming the Doom Patrol to maintain Caulder's legacy. This new incarnation continued to grow and branch out, adding new members before it completely collapsed and was scattered during 1989's INVASION! event, during which Celsius was killed. 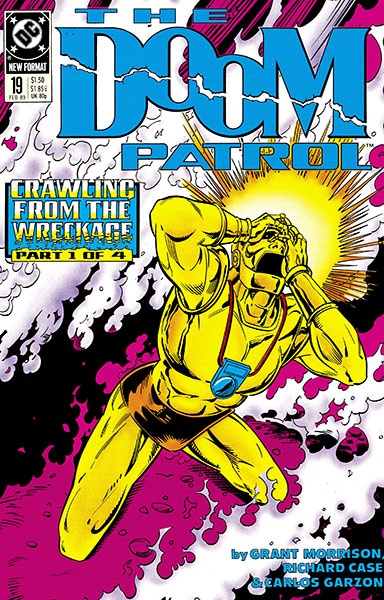 Out of the literal wreckage of INVASION!, a new Doom Patrol was born. In 1989's DOOM PATROL #19, the team returned to its former, albeit strange glory, and saw the return of The Chief, who recruited both Robotman and Negative Man once more to his cause.

This incarnation of the Doom Patrol introduced the team member Crazy Jane, a woman with 64 different personalities, each of which had a different super power, as well as Danny the Street, a sentient, transvestite street able to change its appearance and teleport to various cities. This era also saw the arrival of the Scissormen, a group of villains who existed outside of reality and Mister Nobody and his Brotherhood of Dada, a nihilistic reincarnation of the original Brotherhood of Evil.

Eventually, it was revealed that The Chief himself had caused the accidents that gave the original Doom Patrol their powers (in 1992's DOOM PATROL #57). This called the entire history of the team, as well as Caulder's motivations, into question. After he was exposed, Caulder was decapitated by an entity called Candlemaker, though he survived this attack, thanks to nanotechnology he had implanted in his body, as a disembodied head, kept alive on a tray of ice. Powerless, Caulder expressed regret over his manipulations, though his connection with the team would never be the same.

The team largely faded from prominence until the events of 2005's INFINITE CRISIS event saw it revived once more. Following The Chief's betrayal, Mento stepped in and took over as leader while Beast Boy temporarily returned to the roster alongside two of his Teen Titans teammates, Vox and Bumblebee, both of whom joined the team for the first time. 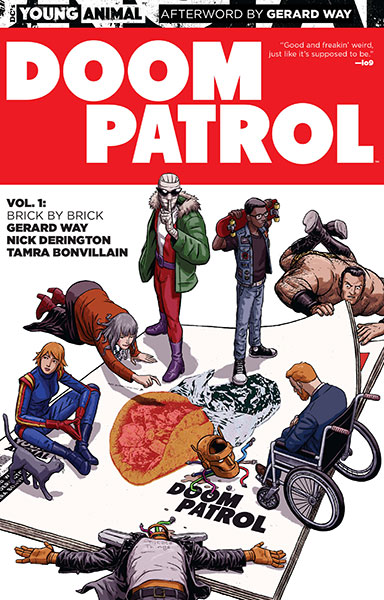 Following the events of 2016's DC UNIVERSE REBIRTH #1, a new Doom Patrol was born. Its roster included a new character, Casey Brinke, who discovered a surreal world in which some of the team's prior members still existed.

Casey was revealed to have been a comic book character imagined by Danny the Street, who now existed inside an ambulance that Casey drove. The duo were  joined by Robotman and Negative Man, alongside newly created characters like Terry None, the daughter of Mister Nobody. This incarnation of the team did not adopt the codename Doom Patrol immediately and instead focused on freeing Danny from an evil corporation known as Vectra before turning its attention to large-scale heroics.