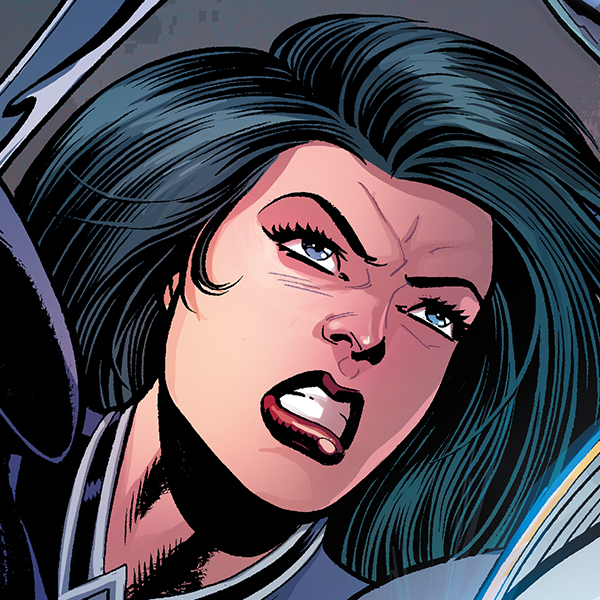 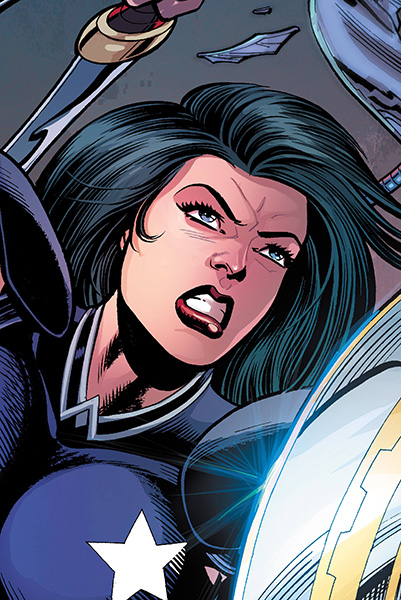 Whether she's referred to as Wonder Girl, Troia, or Darkstar, the Titan known as Donna Troy has honored her adoptive Amazon warrior heritage time and time again.

Whether she's referred to as Wonder Girl, Troia, or Darkstar, the Titan known as Donna Troy has honored her adoptive Amazon warrior heritage time and time again.

The lives of DC Super Heroes can be complicated, and none perhaps more so than Donna Troy. An Amazon from Themyscira, the home of Wonder Woman, Donna began her career as the hero Wonder Girl, playing a key role in the formation of the Teen Titans. But her world was not as it seemed.  While Donna matured as a hero, she discovered numerous lies and half-truths she'd been told as a child, to keep the reality of her history hidden from her several times over.

With the burden of this history and her ever-changing roles heavy on her shoulders, Donna found an inner strength to carry herself forward. With the help of her friends and her mentor, Diana, she came to stand tall as a representative of the Amazonian ideal -- a strong, compassionate, and inspirational leader -- who worked tirelessly to save the world any way she could. 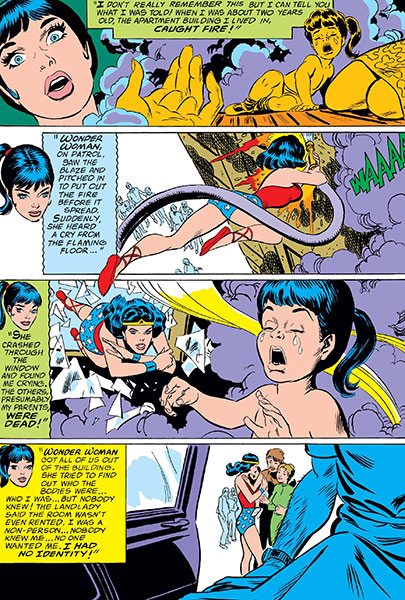 Though she was unaware of her true origin for many years, Donna was created by an Amazonian sorceress out of clay and given life through magic to be a playmate for -- and a weapon to be used against -- Wonder Woman.

Donna lived her earliest years under the pretense of false, implanted memories, believing she was a human girl who'd been rescued by Wonder Woman and brought to Themyscira for protection. She continued under this assumption as she joined the Teen Titans and became Wonder Girl.

Later, through another series of implanted memories, Donna believed she had been rescued from disaster by a mythical group of cosmic beings known as the Titans of Myth. When these false memories were activated, Donna took on the code name Troia, which she operated under for several years.

Later still, Donna was stripped of her Amazon powers and left the Titans to join a cosmic organization known as the Darkstars, which empowered its members with special suits. Donna adopted the name "Darkstar" on this new team.

Eventually, Donna came to learn the truth of her origins. Created through the magic of the witch Derinoe out of the remains of Diana's mother Hippolyta, she was "born" to be the perfect Amazon, and challenged Wonder Woman's claim to the Amazonian throne. Thankfully, she saw the true evil in Derinoe and her mission when Diana used her Lasso of Truth upon her. 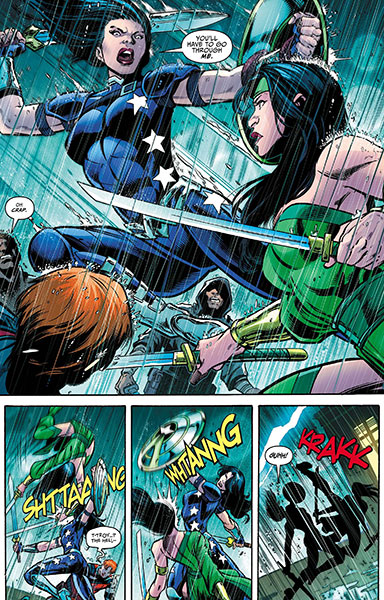 Though she is not a biological Amazon, Donna has the same powers and abilities of her Amazon sisters, including enhanced strength, stamina, speed, and endurance. She is an expert fighter trained in multiple martial arts styles and a wide range of ancient and modern weapons.

Donna's earliest years were spent as an integral part of the Teen Titans alongside Robin, Speedy, Kid Flash, and Aqualad. In this era, it was revealed she had once been a normal human girl whom Wonder Woman had saved from a fire in which her family was killed. Not wanting to see the infant orphaned, Diana took her to Themyscira, where she was trained to be an Amazon warrior. The Amazons used their technology to empower Donna, giving her abilities like those of Diana, and she was raised as Wonder Woman's adoptive little sister.

Eventually, Donna and the rest of her young Titans teammates grew up, continuing to function as Super Heroes. During this time, she and Robin set out to uncover more information about her birth parents, and they learned that, prior to her rescue by Wonder Woman, Donna had been the victim of a child-selling underground network (NEW TEEN TITANS #38, 1984). Around this time, Donna met and fell in love with Professor Terry Long and the two married (TALES OF THE NEW TEEN TITANS #50, 1985). 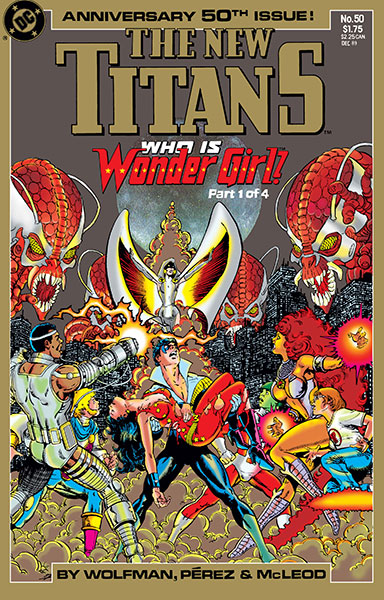 Following the continuity-altering events of CRISIS ON INFINITE EARTHS, Donna's origin story was reimagined. The memories she had of her adoption by the Amazons were said to be false. Instead she had been rescued by the Titans of Myth, a group of cosmic entities who raised her and then erased her memories of them, sending her to Earth to be reawakened when the time was right (NEW TITANS #50-54, 1989).

Following this revelation, Donna chose a new code name, Troia, as well as a new costume.

Donna later learned she was pregnant with a son, but also that his birth would trigger a horrific, cosmic event, turning him into a being known as Lord Chaos. In order to circumvent this fate for her unborn child, Donna agreed to give up the powers given to her by the Titans of Myth and become human (NEW TITANS #92, 1992). Her sacrifice saved her son, but left her powerless.

Seeking a way to continue as a Super Hero, Donna joined the Darkstars, an intergalactic organization of law enforcers, in which she operated under the name "Darkstar." But the change put pressure on her marriage, and she and her husband Terry wound up divorcing. Tragically, both Terry and her son were killed in a car accident not long after (WONDER WOMAN #121, 1997). 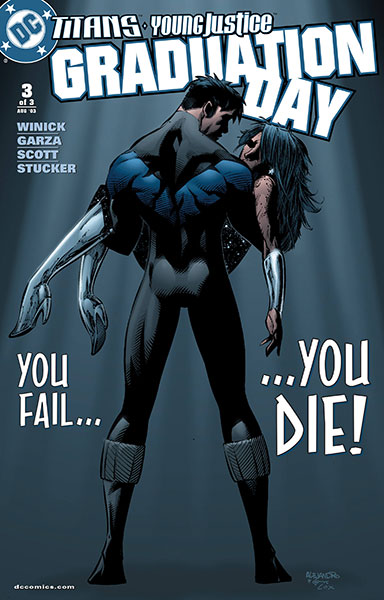 In 1998, Donna's origin story was altered yet again. It was revealed she was not a normal human girl who had been rescued by Wonder Woman or the Titans of Myth, but instead a clay figure enchanted to life by an Amazonian sorceress to be a companion and sister to Diana.

Unfortunately, as a near identical doppelganger to Diana, Donna was mistakenly kidnapped by a villain named Dark Angel. Upon realizing her mistake, Dark Angel forced Donna to live through an endlessly fragmented cascade of her possible lives. As each "life" ended and restarted, Donna would forget all details of the experience she had just lived, but retain the emotional weight of the suffering she had endured. She was freed from this cycle of death and rebirth by Diana, Hippolyta, and her former Titans teammate Wally West.

Soon after, Donna was killed in an attack by a Superman android controlled by a rogue Brainiac program (TITANS/YOUNG JUSTICE: GRADUATION DAY, 2003). She was resurrected in 2006's THE RETURN OF DONNA TROY.

Following her resurrection and the events of 2006's INFINITE CRISIS, Diana passed the title of Wonder Woman down to Donna as she embarked on a personal journey of self-discovery. Donna remained in the role through 2006's "One Year Later" time-skip storyline, but later rejoined her Titans teammates in her more familiar role when they chose to reform (in 2008's TITANS).

During the COUNTDOWN TO FINAL CRISIS (2007), Donna partnered with fellow recently resurrected Super Hero Jason Todd to search the micro-verse for the missing Ray Palmer.

Donna remained a Titan until the aftermath of FINAL CRISIS, when Wonder Woman offered her a position on the Justice League of America, in which she stayed until 2011's FLASHPOINT event. 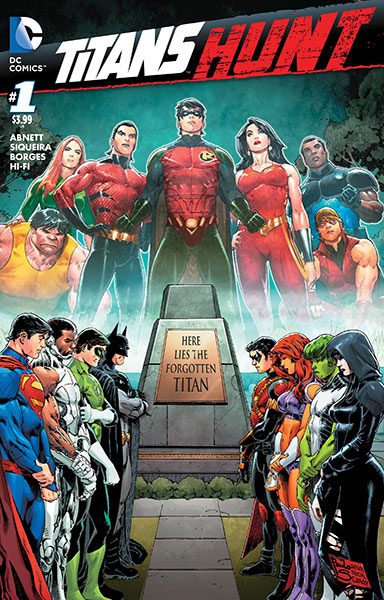 Following 2011's FLASHPOINT, Donna's history was reimagined once again. In this version of events, she was a magically empowered clay figure created by an Amazonian sorceress to be used as a weapon against Wonder Woman.

Much like the first version of her origin story, Donna retained no memory of her actual past. Instead, she was given false memories of being a human girl raised on Themyscira to shield her from the truth.

Despite this, Donna still came into conflict with Diana when they were forced to fight one another over the destiny and social politics of Themyscira, specifically whether or not the island should allow men (WONDER WOMAN #39, 2015).

Later, Donna reconnected with her Titans teammates during 2016's TITANS HUNT, when she learned that her past as Wonder Girl -- along with the memories of all of her teammates -- had been dramatically altered by the evil Mister Twister. 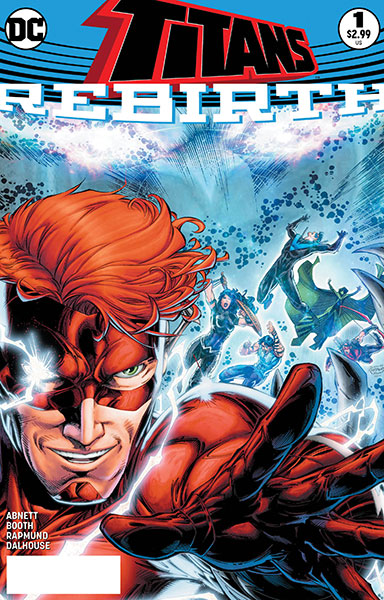 Following the Titans reformation and the subsequent recovery of their memories, Donna decided to remain with her team, re-learning the past that had been hidden from her by both the Amazons and the machinations of Mister Twister. As the team rediscovered their relationships with one another, Donna found herself in a romantic triangle between Wally West and Roy Harper, and ultimately chose to be with Roy. But after a twisted version of Donna from the future called Troia returned to manipulate the timeline (TITANS #17), Donna was quarantined and kept under observation by the Justice League; and this unsupervised iteration of the Titans was disbanded.

After the events of 2018’s NO JUSTICE, Nightwing was tasked once again – this time, by the Justice League – to build a new team of Titans in order to help those affected by the dissolution of the Source Wall (TITANS SPECIAL #1). Donna was the only Titan from the prior team that Nightwing called upon to rejoin – but she faced tragedy once more with the death of Roy Harper during 2018’s HEROES IN CRISIS. Nevertheless, Donna continued her work with Nightwing, and forged new relationships with her teammates.