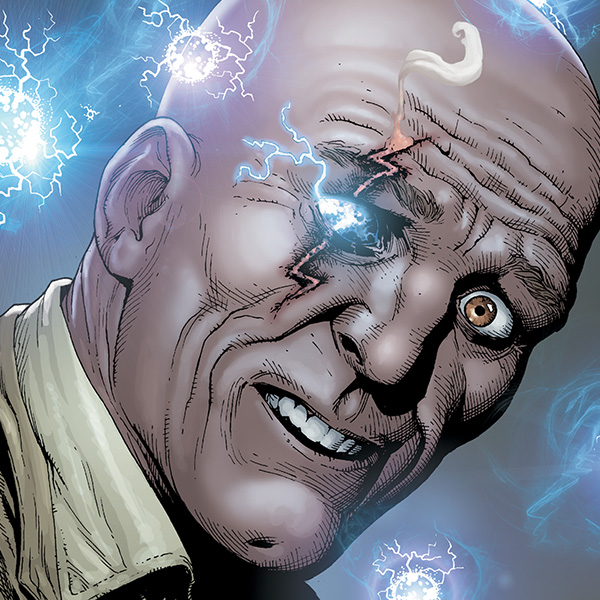 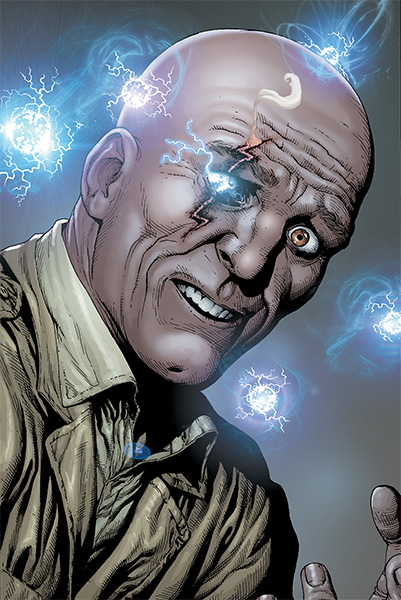 Shazam's sworn archenemy, Doctor Sivana uses both science and magic to carry out his evil schemes.

Shazam's sworn archenemy, Doctor Sivana uses both science and magic to carry out his evil schemes.

Shazam may be the World's Mightiest Mortal, but there's one villain who has consistently given him a run for his money – the evil genius known as Doctor Thaddeus Sivana. Either alone or with the help of other DC Super-Villains, the bald, diminutive inventor has repeatedly used his brilliant scientific mind to try and defeat Shazam, the hero to whom he once gave the derisive nickname "the Big Red Cheese." Sivana was in many ways the prototypical "mad scientist", even coining the phrase "Curses! Foiled again!" He was also prone to uproarious laughter after each of his wicked misdeeds.

Although for decades Sivana used technological against Shazam and his family of heroes, in recent times, the genius inventor has turned to mastering the art of magic as well. In his current incarnation, a bolt of magical lightning hit him in the eye, partially blinding him and leaving him with the power to see magical energy all around him; in ways that ordinary people couldn't. But whether he's using his genius to create deadly weapons or casting ancient spells, Doctor Sivana will stop at nothing to master all forms of knowledge in an effort to destroy his archnemesis.

Doctor Sivana was the original arch enemy of the Shazam family, and during the 1940s, he faced off against those heroes in nearly half the stories published about them. He was born somewhere in Europe, although the exact place is unknown, and in his earlier years, tried to use his scientific knowledge for the betterment of mankind. Sivana was married twice, but lost both wives tragically. He was originally a good man who wanted to help humanity, but the leaders of big business, along with mob bosses and other powerful organizations, blocked him at every turn. In addition, most of the men in charge of these institutions mocked him and considered him a madman, and smeared his reputation.

Deeply bitter because society rejected him, he then used his scientific knowledge to build himself a spaceship, which he used to take himself and his children to the planet Venus, where he lived in exile for many years. Sivana lived on that planet with his four children, starting with his kind adult daughter Beautia, his son Magnificus, who had enhanced strength, and two teenagers Georgia and Thaddeus Sivana, Jr, who were wicked geniuses like their father.

After many years in hiding on Venus, He then returned to Earth, where he became a master criminal and Shazam's most frequent enemy. He fought against the Shazam family both alone and with other villains like the Monster Society of Evil. He was one of the only Super-Villains who had discovered that teenager Billy Batson was in fact the World's Mightiest Mortal. Shazam once discovered all the good deeds done in Sivana's past, and actually facilitated his winning the Nobel Peace Prize, but he no longer cared about receiving accolades from those who would not bow down and worship him.

After disappearing for twenty years, Doctor Sivana returned. It was explained that Doctor Sivana and the entire Sivana Family had trapped the Shazam family and their associates, and also accidentally, themselves, in a sphere of a substance of his own creation called Suspendium. They were released when the Suspendium sphere came close to the sun, thus melting it enough that the Shazam family were revived, and they then pushed it back to Earth.

The Sivanas escaped their vessel, and they began their long standing rivalry with the Shazam family all over again as if no time had passed. It was during this time that it was revealed that the Shazam heroes and all their enemies, including Sivana and his family, took place on the parallel world of Earth-S, one of the worlds of the original Multiverse. 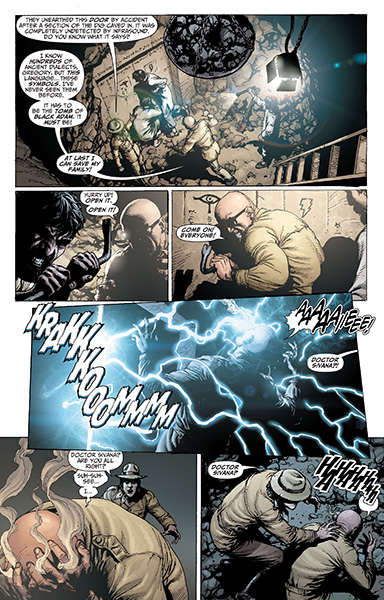 After the Multiverse was consolidated after the events of CRISIS ON INFINITE EARTHS, the denizens of Earth-S, including Sivana, were folded into a singular Earth. In this new reality, Sivana reemerged once again as a mad scientist and a criminal genius in the miniseries SHAZAM! THE NEW BEGINNING. In this reality, Sivana only had two children, Beautia and Magnificus, and was also Billy Batson's step-uncle. In the POWER OF SHAZAM! graphic novel, Sivana was once again revamped, and he was now a powerful industrialist, and the CEO of his own company, Sivana Industries. But when he loses his vast fortune, he blames Shazam for his predicament, and becomes his lifelong enemy.

Sivana later reorganized the Super-Villain team known as the Fearsome Five, and set himself up as its leader. After several conflicts with not only the Shazam family but also the Outsiders, Sivana was eventually taken to the mysterious Oolong Island, a tropical paradise which was run by the criminal organization known as Intergang. There, he and other criminal scientists were allowed to create deadly inventions completely freely, all which were to be used against the Super-Hero community.

Dr. Sivana later turned out to be ultimately responsible for the events of the limited series 52. When Sivana captured Mr. Mind, a sentient worm who was also hated Shazam, Sivana then showered him with treatments of his own Suspendium time-travel compound. As a result, Mr. Mind mutated into a "hyperfly", a planet-sized creature with the ability to travel through time and appear in different realities, posing a serious threat to the Multiverse. He is finally thrown back in time to the day where Dr. Sivana found him in the first place. After this event, Sivana joined various versions of the Secret Society of Super-Villains and the Injustice League.

In the post-FLASHPOINT reality, Thaddeus Sivana was still one of the Earth's greatest scientific minds, but he abandoned science for magic, during a point in his life when science failed to help members of his family who were dying from a mysterious illness. Sivana began to research ancient myths, hoping to find an answer as to how to save his family through mystical means. He thought he found that answer when he came across the legend of Black Adam, a slave who walked into a cell door and found himself in the Rock of Eternity. There, he was granted the power of the wizard Shazam.

Sivana searched the world over for the tomb of Black Adam, and found it in the deserts of Khandaq. When he pried open the tomb, a bolt of lightning struck him in the right eye, giving him the ability to see magical energy out of that eye. Because of this mystical change to his being, Sivana's bones and muscles started to weaken due to his unprotected connection to magic. Sivana then freed Black Adam from his centuries-long imprisonment, and the two became partners, hoping to steal the powers of Shazam, which had now gone to young Billy Batson. After working with Black Adam and failing to defeat Billy Batson, he later teamed up with Mr. Mind. 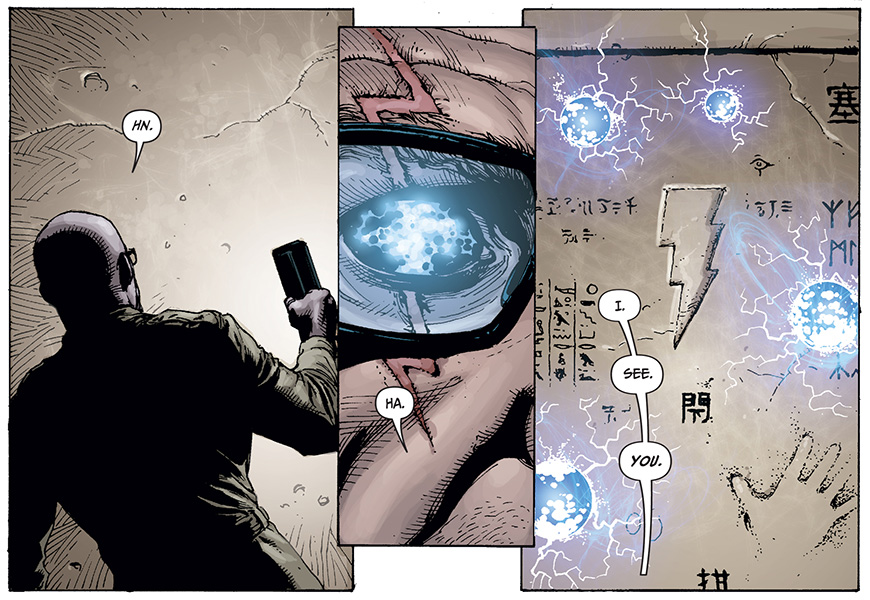 In his original Golden Age incarnation, Doctor Sivana had a genius level intellect, with scientific knowledge that was far superior to almost any scientist on Earth. He was an expert in the fields of robotics, electronics, and chemistry, but his body was small and weak. He built a spaceship that allowed him to travel to the planet Venus. He even once mastered a formula which allowed him to walk through walls and other solid objects. After the events of CRISIS ON INFINITE EARTHS, Sivana was still a scientific genius, but was also a rich and powerful business tycoon.

In the post-FLASHPOINT reality, Doctor Sivana still had a genius level intellect, and was a master of all manner of scientific disciplines. He also had a vast knowledge of ancient history, and could read and speak hundreds of ancient languages. But he also began to become an expert on magic and mysticism due to his time studying Black Adam. When the mystical lightning struck him in the eye, it partially blinded him, but also granted him the power to "see" magical energy, in a way ordinary mortals could not.

Doctor Sivana appeared for the first time right alongside his arch-enemy, starting a rivalry that would last decades. In this original story, he created a "Radio-Silencer" ray, which could drive all radio broadcasters off the air, and then attempted to extort fifty million dollars from the commercial broadcasting industry. Captain Marvel thwarted his plans, but a lifelong hatred was born in Sivana.

After having vanished for twenty years, Sivana returns to comics in this story, where we learned that he once used his own creation, a substance called Suspendium, to trap the Shazam Family inside of a force field bubble which kept them in a state of suspended animation for two decades. Unfortunately for him, Sivana foolishly also trapped himself and his own family within the same predicament.

In this reinvention of the Shazam character after the Multiverse-altering CRISIS ON INFINITE EARTHS, Billy Batson goes to live with his Uncle, Thaddeus Sivana, after his parents are killed in an accident. Upon gaining the Shazam powers however, he learns that Sivana actually is the one who engineered his parent's deaths, so he could collect the life insurance money, which he hoped to use as a means of funding his criminal experiments. 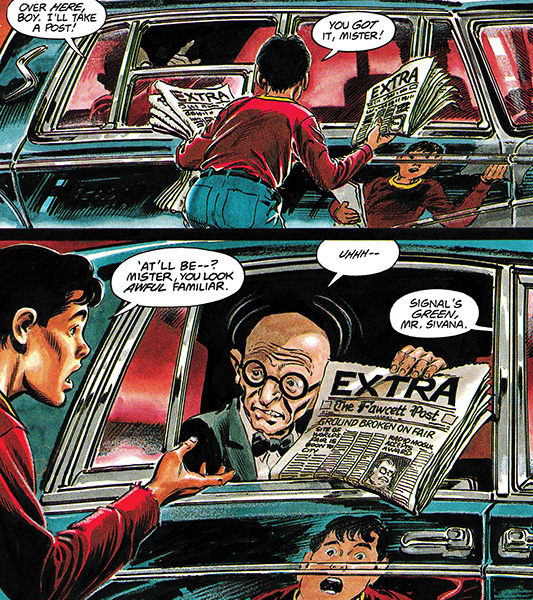 In his second post-CRISIS reintroduction, which relegates the previous mini-series to being out of continuity, Sivana is introduced as powerful businessman, who had funded the Fawcett City World's Fair. But when Captain Marvel and Black Adam have a battle on his fairgrounds, costing him millions in lost and damaged property, Sivana is financially ruined, and vows revenge against the World's Mightiest Mortal.

In the post-FLASHPOINT reality, Dr. Sivana make his first appearance as a renowned scientist, who will go to any lengths to save his family from an unknown illness. Turning to magic to find answers, Dr. Sivana's team finds the tomb of Black Adam, and when he attempts to crack it open, he is then half-blinded by a magical bolt of lightning to the face, which has the side-effect of allowing him to see magical energy.