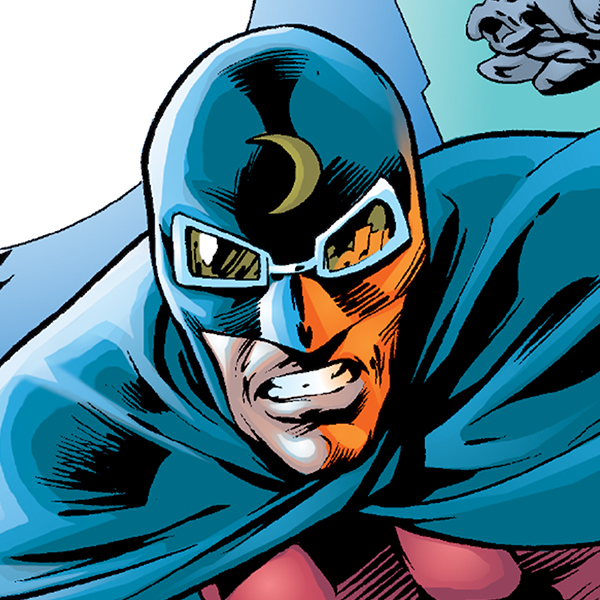 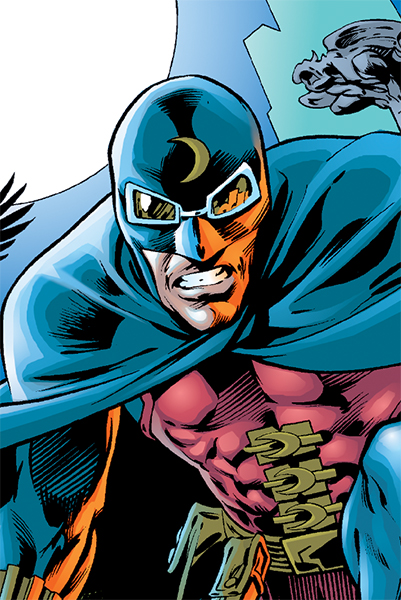 Blind in the light but keen in the dark, this Justice Society member’s greatest asset to the Super Hero community is his medical prowess. When heroes need a doctor, they seek Doctor Mid-Nite.

Blind in the light but keen in the dark, this Justice Society member’s greatest asset to the Super Hero community is his medical prowess. When heroes need a doctor, they seek Doctor Mid-Nite.

The DC Universe is filled with heroes who can fight against evil, or protect the innocent. But how many of them can treat the sick and wounded? Since the Golden Age of the Justice Society, one of those rare heroes has been Doctor Mid-Nite: a blind surgeon with special lenses which allow him to see perfectly in the dark, despite his condition.

In his civilian identity, few would suspect that this blind but brilliant doctor was a crime fighting hero. But both in the cowl and out, Mid-Nite stands as a necessary pillar to a community of heroes when they are in need of medical attention, and have nowhere else to turn without endangering their own identities. Over the years, Doctor Mid-Nite has developed a specialty in treating the Super Hero set, making him the best person to seek out for a hero in need of healing. 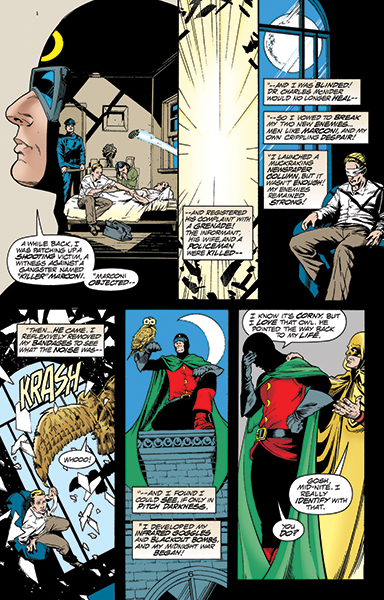 Although there have been a number of Doctors Mid-Nite over the ages, all share an uncannily similar backstory. It begins when a promising young doctor is blinded in an accident. In the case of Charles McNider, it was a grenade thrown into an operating room. For Beth Chapel, it was an oxygen explosion in a hospital. And in the case of Pieter Cross, he was dosed with an experimental drug by street dealers and ended up in a car accident. But in each case, these victims emerged with their sense of sight in darkness enhanced. No matter who wears the ultrasonic cowl, however, under the cover of night, Doctor Mid-Nite always seeks to right the very injustices that robbed them of their sight, and do all they can to ensure no others may suffer their fate. 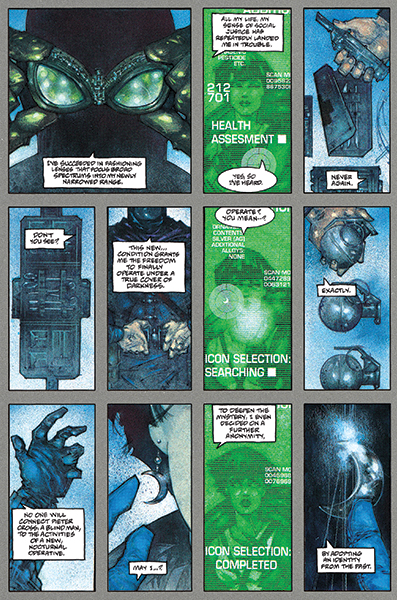 Though he is blinded by light, Doctor Mid-Nite’s cowl allows him to see perfectly in darkness. Thanks to the aid of proprietary “ultrasonic” lenses within his cowl, Mid-Nite can overcome his blindness and see during the day. As a crimefighter and member of the JSA, Mid-Nite’s combat abilities allow him to keep up with the rest of the team in their battles against evil. His signature weapons, “blackout bombs,” shroud the field of battle in darkness, granting him an advantage over his enemies. For additional aid and reconnaissance, Doctor Mid-Nite keeps trained owls to go where he cannot.

But perhaps Mid-Nite’s greatest ability is his vast medical knowledge of both the fantastic and mundane. When a hero falls ill or injured, Mid-Nite is typically the hero that the world’s most powerful men and women turn to for help. 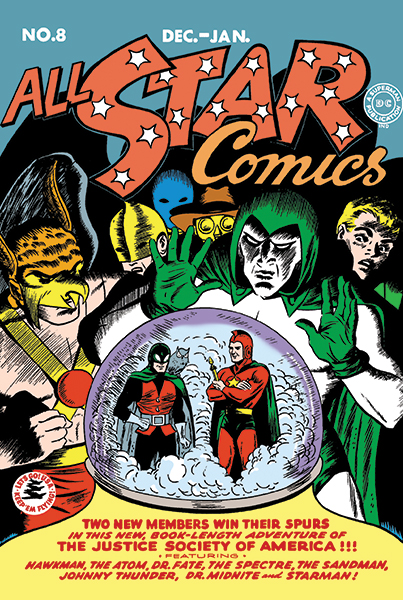 As one of Keystone City’s most capable surgeons, Charles McNider had always been a hero. But when he was called one day to operate on a key witness in the trial of mafia boss “Killer” Maroni, one of Maroni’s men broke into the operating room and threw a grenade. Instantly, everyone present was killed… everyone but Charles, who had been left permanently blinded.

As McNider recovered from the attack, he resigned himself to the fact that he may never be able to practice medicine again, and threw himself into training the rest of his body to prime physical condition, while dictating an opinion column which he hoped would help put Maroni in prison. But new possibilities opened up for Charles when an owl crashed through his window, and he instinctively removed the bandages from his eyes to look -- to find that somehow, in the pitch black of night, he could see even better than he previously could in the day.

Keeping his night vision a secret, McNider adopted the identity of Doctor Mid-Nite in order to take a more proactive role in bringing “Killer” Maroni to justice. To help him fight crime, he invented a cowl with “infrared” (later, “ultrasonic”) lenses which would aid his ability to see in light, and “blackout bombs” which emitted clouds of darkness through which no one could see but him. He even adopted the owl who had crashed through his window, and trained him to act as an extension of his will. (He called him “Hooty.”) After doing his part to foil “Killer” Maroni once and for all, Doctor Mid-Nite continued to pursue an active role in crime fighting.

Eventually, Doctor Mid-Nite’s efforts would earn him a chair at the table of the world’s first Super Hero team, the Justice Society of America, where he protected America against Axis forces during World War II. Even after the Society’s disbanding in the McCarthy era, McNider continued to publish periodicals in an effort to root out organized crime. Briefly, he returned to crime fighting as Starman, taking over for former JSA colleague Ted Knight after suffering a nervous breakdown, until the mantle could be passed down to Ted’s son David (STARMAN SECRET FILES & ORIGINS, 1998).

Charles McNider’s last great case was a decade-long pursuit of The Shadower, a villain who murdered his longtime assistant and lover, Myra Mason (STARMAN #77, 2001). After that, McNider would occasionally emerge from retirement along with other living members of the JSA in an advisory role to the new generation of heroes, and, as a professor, instructing the next generation of doctors. What he would never guess was just how closely two of his students would follow in his footsteps. 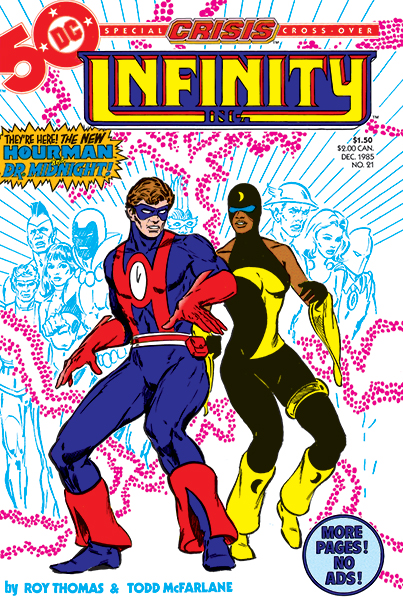 Elizabeth Chapel, one of McNider’s prized proteges, first entered the world of super-medicine when helping Jade, daughter of original Green Lantern Alan Scott, recover from a battle against Mister Bones (INFINITY, INC. #19, 1985). But during the world-shattering “Crisis on Infinite Earths,” an oxygen explosion destroyed the hospital where she worked. Although Hourman was able to save her in time, the explosion would permanently blind her, just as that fateful grenade had blinded her mentor long ago. But the similarities didn’t end there: like Dr. McNider, Beth discovered that she could see even better than before in the dark, and took up the name “Doctor Midnight” as a member of Infinity, Inc. -- a team of legacy heroes following in the footsteps of the JSA (INFINITY, INC. #21). But after the tragic death of team member Skyman at the hands of Harlequin, Mister Bones, and Solomon Grundy, the team soon disbanded.

One last mission waited for Doctor Midnight after the end of her team. Spymaster and government agent Amanda Waller recruited Chapel for her team of “Shadow Fighters” -- an elite unit tasked specifically with bringing down one of the greatest active global threats, Eclipso. Chapel made her final stand against Eclipso in South America, where she and a number of other heroes- including former fellow Infinitor Yolanda Montez, Peacemaker, Commander Steel, and Major Victory- would all perish under the wrath of Eclipso.

With his protege gone, McNider himself returned to battle shortly after with his fellow JSA alumni to battle Extant during the temporal disaster known as “Zero Hour.” McNider, the original Atom, and the futuristic android Hourman were all killed in the encounter.

In the aftermath of DOOMSDAY CLOCK, Doctor Manhattan returned many forgotten heroes back to a significantly altered timeline. One of many side effects to this interference was the apparent resurrection of Beth Chapel -- although what future adventures await her remain untold. 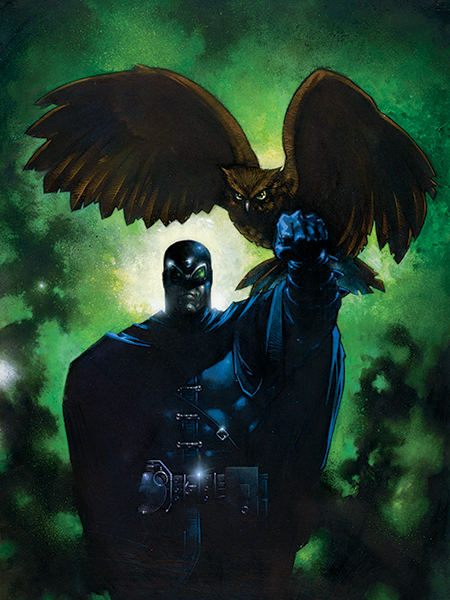 However, Beth Chapel wasn’t the only student under the original Dr. Mid-Nite. The Norwegian born Pieter Cross wasn’t just a protege to McNider, he was the first person Pieter ever met -- as a baby, Charles McNider delivered him into the world. Pieter grew up to be a doctor himself, and moved to America to study with the great Dr. McNider. Like his mentor, Pieter also inherited a need to weed out organized crime, and began pursuing an illegal Venom-derived drug hitting the streets of Portsmouth City, courtesy of the animal themed group of Batman villains known as the Terrible Trio. In his pursuit of the trio, Pieter was drugged and left for dead in an orchestrated car crash. But like his predecessor, Pieter survived the organized crime assault, but with his vision lost to him… though, thanks to an unexpected side effect of the drug, he could now see perfectly in the dark. Cross used these abilities to pursue the other half of his mentor’s legacy, and continue on as the third Doctor Mid-Nite. (DOCTOR MID-NITE #1-3, 1999)

After McNider’s death in “Zero Hour,” Pieter was enlisted as a new member of the reformed Justice Society of America (JSA #7-9, 1999). Though Cross was no stranger to crime fighting, it soon became clear that Pieter was both more capable and more useful at an operating table. Since his induction to the Justice Society, Pieter Cross has been the man heroes turn to when injured or infirm with a job hazard the likes of which aren’t seen in normal medical facilities, or when secret identity preservation is paramount. When a hero needs a hospital, they dial “M” for Mid-Nite.