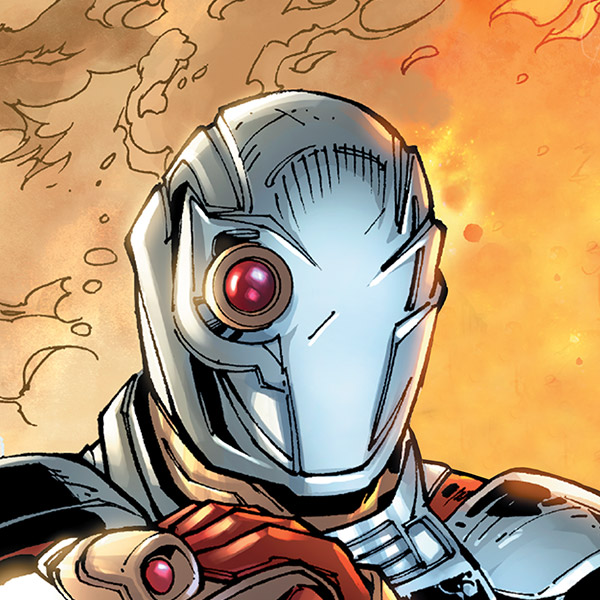 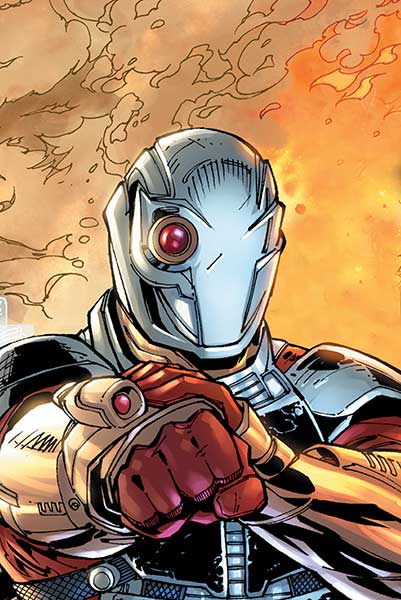 A former Batman villain and a founding member of the Suicide Squad, Floyd Lawton is the ultimate killer for hire.

A former Batman villain and a founding member of the Suicide Squad, Floyd Lawton is the ultimate killer for hire.

One of the deadliest assassins in the DC Universe, Floyd Lawton, a.k.a. Deadshot, has no real superhuman abilities, unless you count his uncannily accurate aim and affection for firearms of all types. Boasting that he never misses a shot, Lawton became infamous as a deadly marksman and gun-for-hire, a reputation that earned him no shortage of trouble with both the law and the Super Hero community.

During one of his prison stays, Lawton was recruited by Amanda Waller to join the covert Task Force X, otherwise known as the Suicide Squad, in exchange for a reduced prison sentence. A thrill-seeker with a self-destructive personality, Lawton readily accepted the terms and went on to be one of the Squad’s longest-serving members.

Though he’s violent, dangerously unbalanced and murderous, Lawton has, over time, shown a capacity for good. He is fiercely loyal to his semi-estranged daughter, Zoe, whom he tries to support with the earnings from his missions and criminal endeavors. 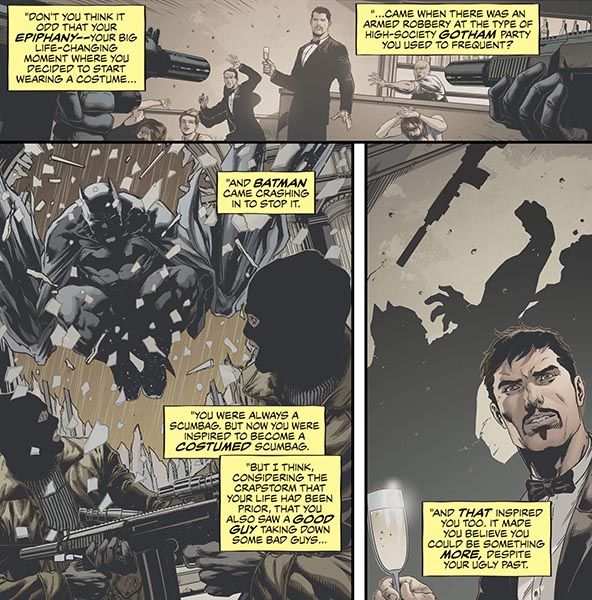 The son of a real estate baron and a banker, Floyd spent his childhood in the luxury of upper-class wealth. But he was trapped under the thumb of an abusive father and a mother who only had time for Floyd’s older brother, Edward. Though he was neglected and largely forgotten by his parents, Floyd deeply respected and idolized his brother.

When Floyd was still young, his mother snapped under his father’s perpetual abuse and asked both of her sons to kill her husband, ostensibly for the good of the family. Edward agreed, but Floyd tried to stop him and—in a freak, horrific accident—wound up shooting his brother while aiming for his father. From that moment on, Floyd vowed he would never miss another shot and ran away from the wreckage of his family to train as a marksman. 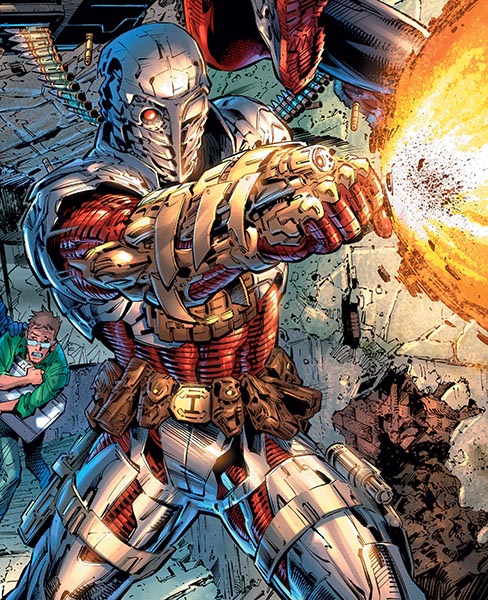 Lawton is a human in peak physical condition with expert marksmanship abilities. He is proficient with multiple weapons and projectiles, often bragging about his ability to “never miss” a target. He also has access to custom technology, such as the wrist-mounted pistols he frequently uses. 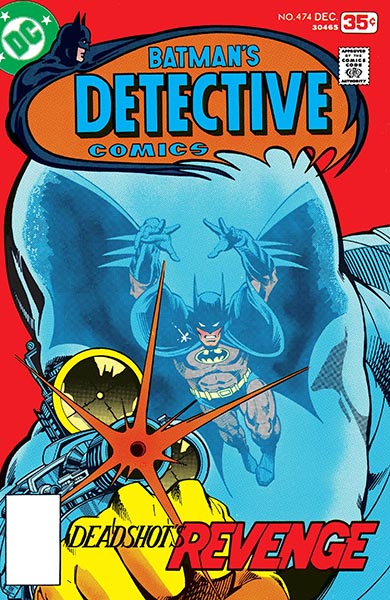 Floyd’s introduction to Gotham City came with a half-baked plan to “replace” Batman. Dressed in his first costume—a tuxedo, top hat and mask—Floyd took up the moniker Deadshot and touted himself as a vigilante, working closely with the Gotham City Police in an effort to make a name for himself. It wasn’t until Batman uncovered the truth—that Deadshot had in fact been using his artificial Super Hero status as a front to build ties to criminal organizations—that Deadshot was sent to prison.

His stay in Blackgate was unkind to Floyd, and he emerged from his sentence a hardened convict with no real regard for collateral damage or bystanders. He upgraded his costume, turning in the tuxedo and hat for a red-and-gray uniform and full-face mask, and began terrorizing Gotham as a murderous criminal. He blamed Batman specifically for ruining his life and carried out a personal, maniacal crusade against him at every opportunity.

Following an arrest by the Flash, Floyd was given the opportunity by Amanda Waller to join the covert Task Force X, a.k.a. the Suicide Squad, in exchange for his freedom. He accepted and, somewhat begrudgingly, worked with the Squad for a lengthy period of time under the leadership of Rick Flag. 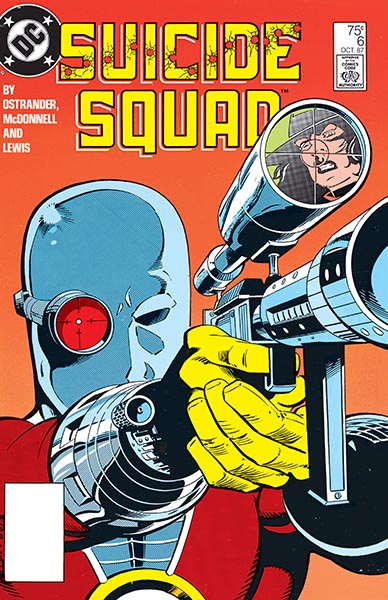 During his time with the Squad, Floyd revealed that he had an ex-wife named Susan and a son named Edward, named after his late brother. Susan reached out to Floyd after Edward was kidnapped, but Floyd was too late to act and Edward was murdered by a crime lord named Wes Anselm. Blind with rage, Floyd executed Anselm, only to learn he was just a small piece of the puzzle. It turned out that Floyd’s own mother, who’d blamed Floyd for the death of her eldest son, had masterminded the entire scenario.

The revelation and subsequent fallout sent Floyd into a delusional and depressive episode that caused Amanda Waller to have second thoughts about Deadshot’s viability on the Suicide Squad. But he was not officially benched from active duty. Instead, he continued to spiral, leading to several close calls with mission targets and an increasing propensity to place himself in extremely dangerous and potentially fatal situations.

Eventually, Floyd learned he had a daughter being raised in the slums of Star City, which prompted him to go straight. After faking his own death, he monitored the city in secret (DEADSHOT: URBAN RENEWAL, 2005).

In the days before 2005-2006’s INFINITE CRISIS, Deadshot was one of a group of heroes recruited by a cloaked figure called Mockingbird (secretly Lex Luthor) to become part of a new incarnation of the Secret Six. While active with the team, he sent his earnings to his daughter and her mother.

Floyd remained with the team, developing a grudging respect for his teammate Catman, for several years, until the disbandment of the Secret Six during the build-up to FINAL CRISIS (2008-2009).

Without a team, Floyd briefly struck out on his own, haunting Gotham City (BATMAN: CACOPHONY, 2008-2009), and temporarily returned to the Suicide Squad before the Secret Six were reestablished. He remained with the latter team until the events of FLASHPOINT (2011) reset the continuity of the DC Universe. 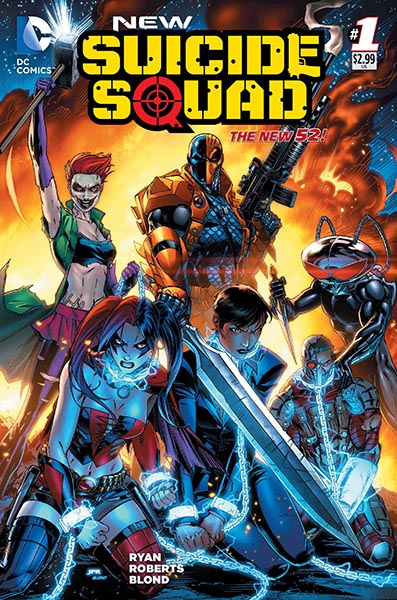 During the New 52, Deadshot retained most of his original backstory. He was sentenced to life in prison after attempting to assassinate a senator. From his cell, Amanda Waller recruited him to the Suicide Squad, which he joined in an effort to make a better life for his daughter.

In BATMAN: THE WAR OF JOKES AND RIDDLES (2017), with Floyd’s original history reinstated, it was revealed that during his time in Gotham City he faced off against Deathstroke—in a marksmanship competition that racked up a large body count of innocent people before Batman intervened. The ensuing fight left Floyd badly beaten and hospitalized.

At some point after this event, Floyd was approached by Amanda Waller and made to join the Suicide Squad, in which he currently remains.