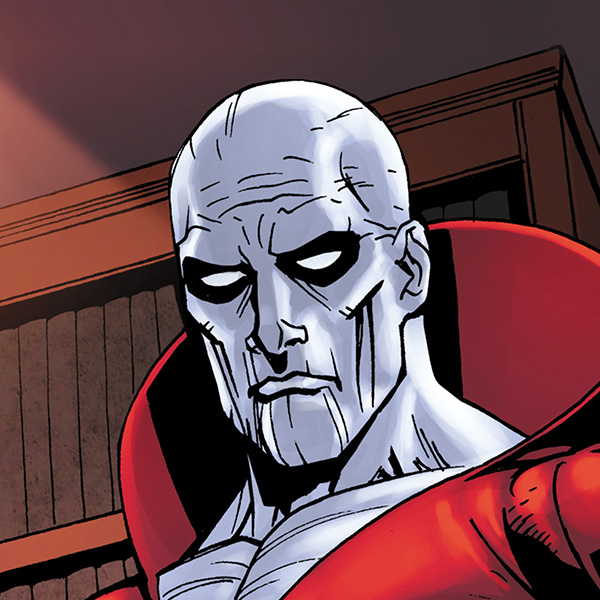 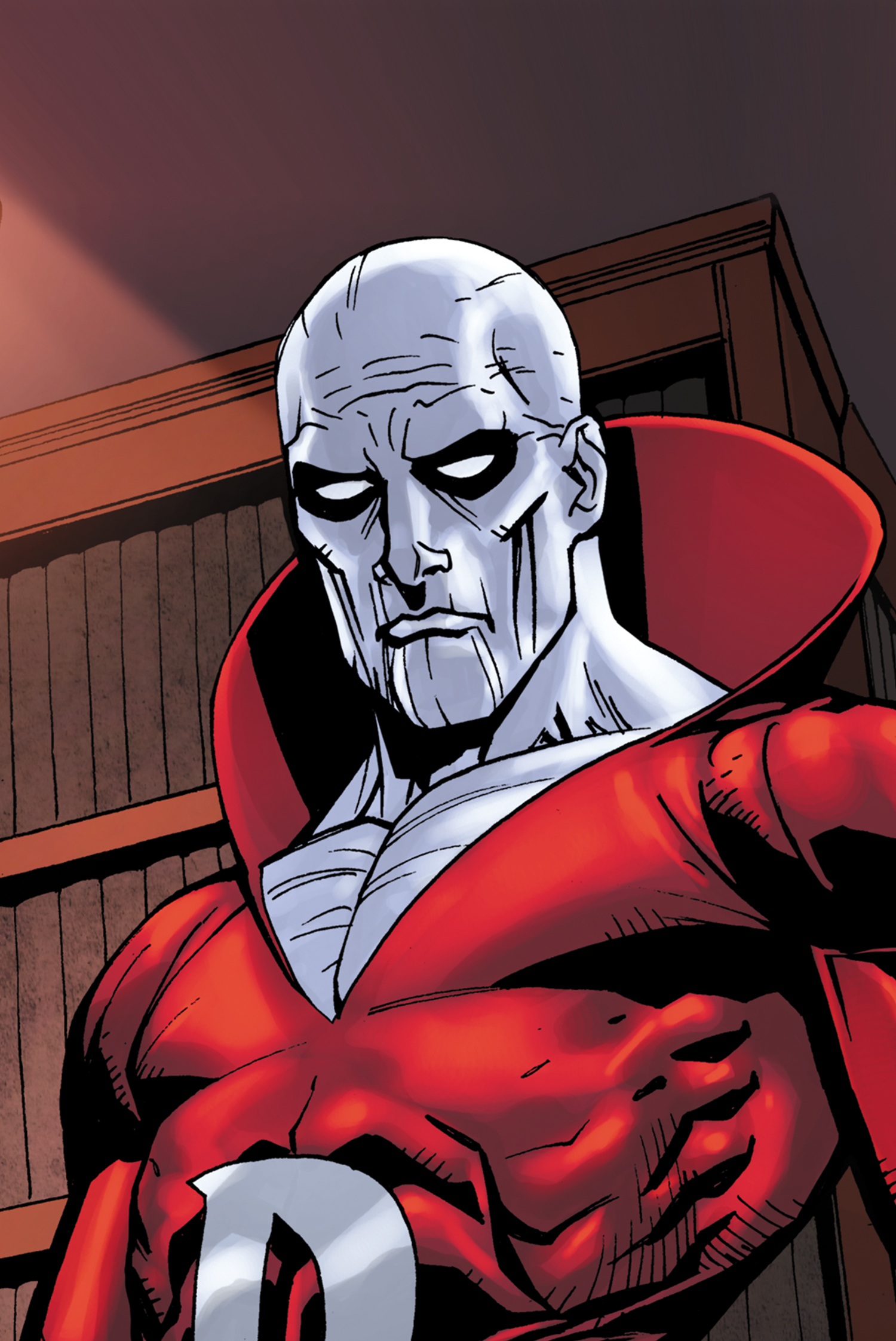 A circus aerialist murdered in his prime, Boston Brand haunts the Earth in search of justice.

A circus aerialist murdered in his prime, Boston Brand haunts the Earth in search of justice.

In life, circus aerialist Boston Brand was one of the world's greatest acrobats. But in death, he became one of its greatest heroes. Brand performed as a trapeze artist using the stage name "Deadman," due to his death-defying acts, along with ghostly white face paint and a flamboyant costume. But during one of his performances he was murdered in midair by a mysterious assassin -- known only as "The Hook." When he died, his spirit was granted the power to possess any living being by the Hindu god Rama Kushna, so that Boston could search for his killer and receive a measure of peace. Now a literal Deadman, he was both a ghost and a DC Super Hero.

Although Deadman would eventually catch his murderer, who'd killed him as part of an elaborate initiation ritual to join an elite group of assassins, he continued to use his abilities to help people in the mortal world. While the majority of Earth's heroes don't know about Brand's existence as Deadman, there are a select few who do. He's worked several times with Batman, as well as more supernaturally inclined heroes like the Spectre and the Sentinels of Magic. In more recent years, he's served as a member of the Justice League Dark. Whether solo or partnered with other heroes, Deadman continues to haunt the Earth, protecting the innocent and working to balance the scales of justice. 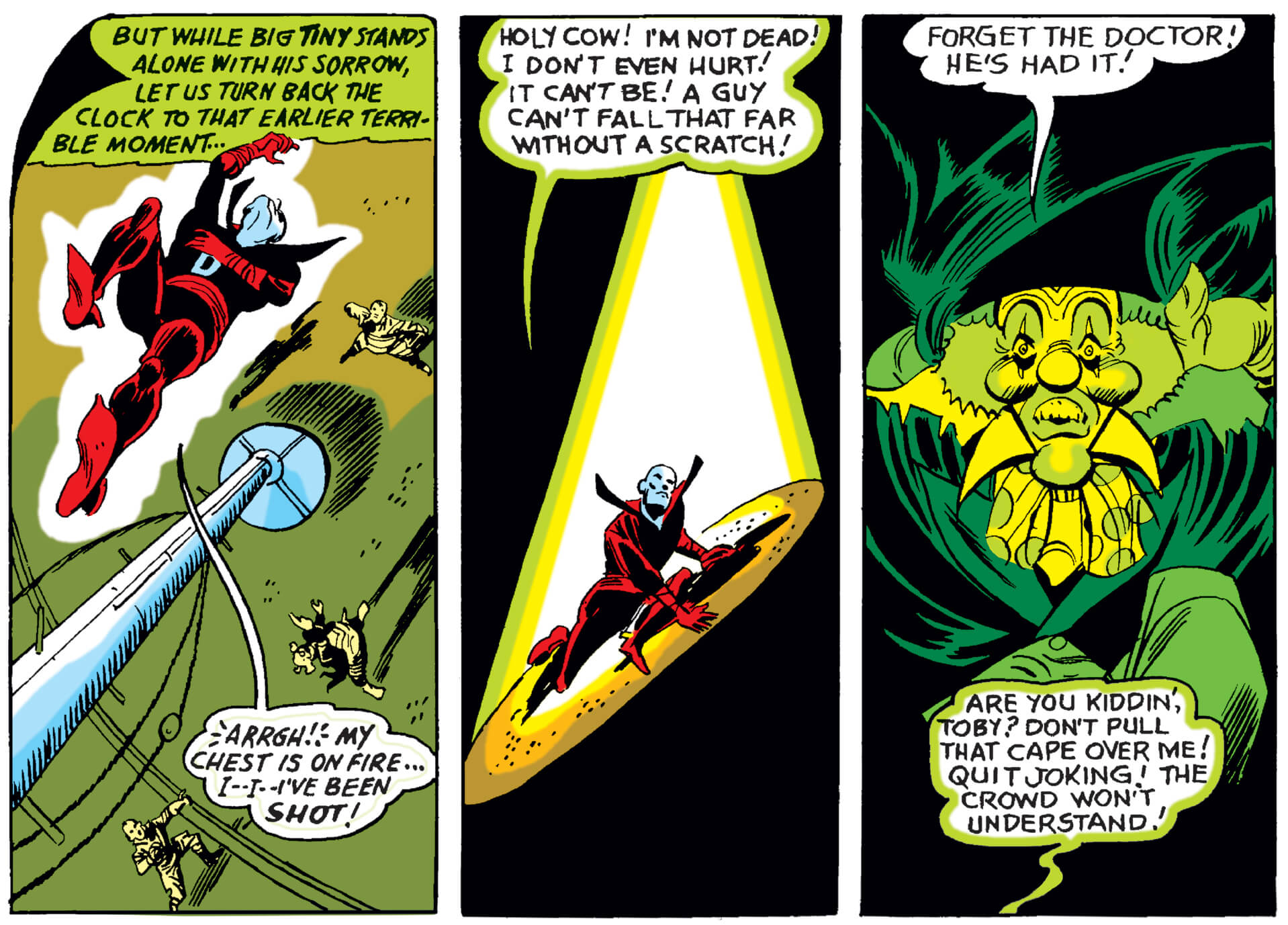 Boston Brand was one of the world's most famous high wire acts, and as "the Deadman," he drew in huge crowds for the Hills Brothers’ Circus, performing death defying acts in theatrical, macabre makeup. His twin brother Cleveland Brand was also an acrobat, but was never talented as Boston was, and retired from the circus life early on. One night, while performing his trapeze act, Boston Brand was killed by an assassin's bullet. As his spirit drifted into the afterlife, he encountered the Hindu Goddess of Balance known as Rama Kushna. She explained to him that due to the many acts of kindness he performed during his lifetime, she would grant his soul the ability to possess mortal bodies for brief periods of time, and use those bodies to do good in the world and to help others.

Now a literal Deadman and not just a figurative one, Brand began taking over different living bodies, and started searching for his killer, who he only remembered had a hook for a hand. He eventually tracked down "the Hook," and learned that he had killed him as part of an initiation ritual to get into the infamous League of Assassins. He was never able to get vengeance however, as the Hook was killed by the League's leader, the mysterious Sensei. Later, with the help of the Batman, Deadman was able to prevent the League of Assassins from taking over the fabled land of Nanda Parbat in the Himalayas, a place that was guarded over by Rama Kushna.

Eventually, Boston Brand asks to possess his twin brother Cleveland's body for one week, and then Boston, inside his own brother's body, starts training to perform his world famous aerial act one more time for a live audience. But during the performance, Boston is shot once again, in an almost exact repeat of his first death. Only this time, his brother also died. Boston and Cleveland both confront Rama Kushna inside a supernatural vortex, but Cleveland is allowed to move on to the afterlife, while Boston must continue on in his mission as Deadman.

Continuing his mission on the Earthly plane, Deadman assists many living beings in seeking justice, sometimes alone, and sometimes with the help of other heroes like Batman, whom he teamed up with many times. Other times, he joined forces with other supernatural crusaders like the Spectre, Doctor Fate, and John Constantine. He briefly joins some of Earth's mystical heroes during in a short-lived group called the Sentinels of Magic, as well as the Seven Soldiers of Victory.

During the Blackest Night catastrophe, his corpse became a part of the Black Lantern Corps. His soul attempted to possess his former body which was now animated by a Black Lantern power ring, but it caused him great agony. While inside though, he was able to gain significant knowledge about the plans of the villainous Nekron, who was behind the Black Lanterns, and help turn the tide in favor of Earth's heroes, helping to save creation. After the conclusion of the Blackest Night, the White Energy of Life brought Boston Brand back to life in his mortal form.

The newly mortal Deadman discovers that his White Lantern power ring can return the dead to life. During this period, he falls in love with Dawn Granger, a.k.a. Dove, another formerly dead hero who came back to life in the aftermath of the BLACKEST NIGHT event, a.k.a. BRIGHEST DAY. But Captain Boomerang kills Boston Brand all over again, denying him his second chance at life, and separating him from Dawn. Before he dies, he passes on his White Lantern power ring to Alec Holland, the Swamp Thing, and shares an emotional goodbye with Dawn.

In the post-FLASHPOINT reality, Boston Brand's origins are changed. In this new timeline, during his life Brand grew up in an abusive household, and ran away to join the circus at age sixteen. He grew into a selfish and egotistical man, and after his assassination on the high wire, he is forced to possess people as Deadman as a way of setting the problems in their lives right, all in an effort to avoid spending an eternity in Hell. He later joins several supernaturally powered heroes in a team that was unofficially called the Justice League Dark. 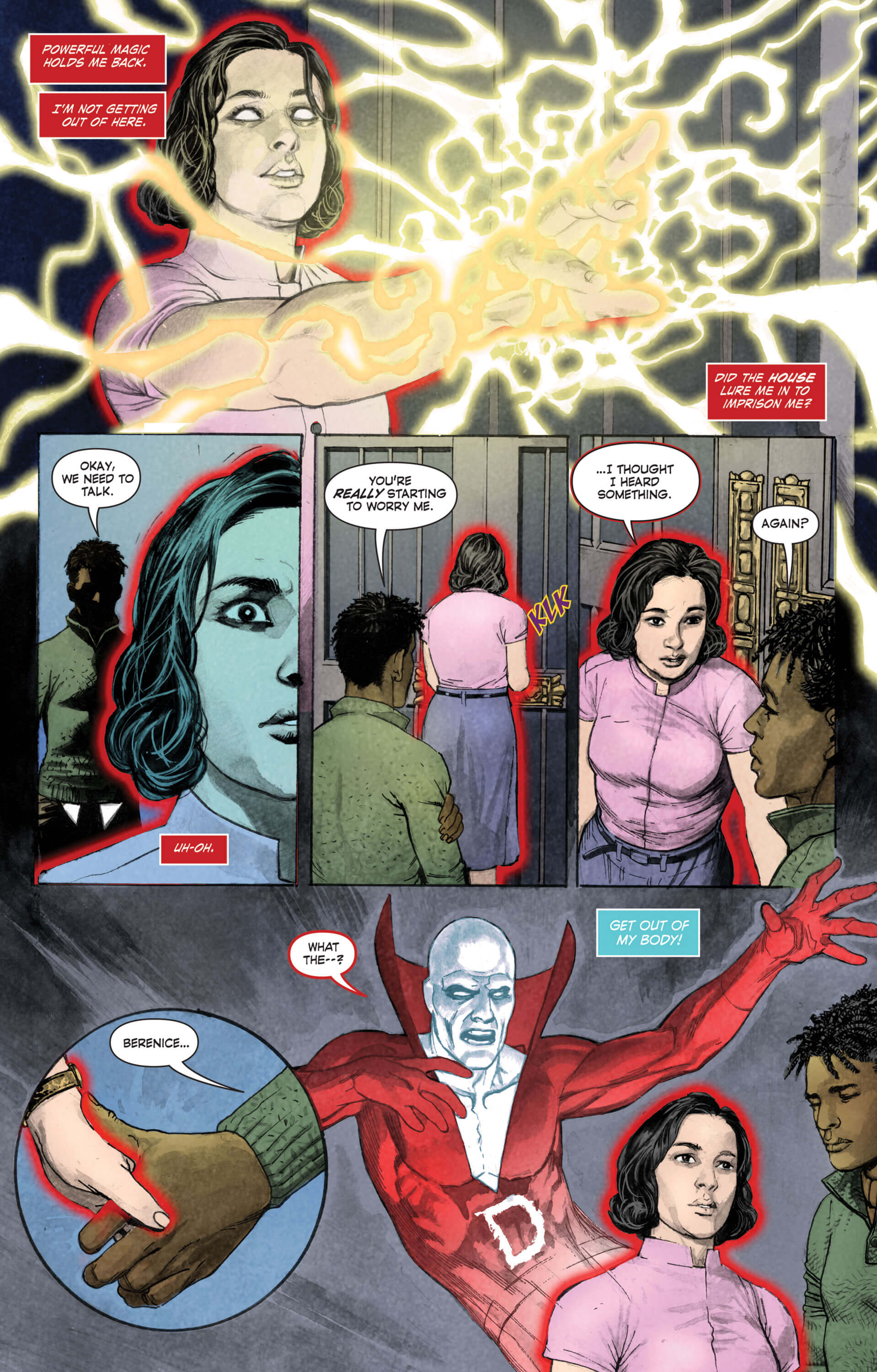 Essentially a ghost, Deadman can't be seen or heard by most ordinary mortals, although those with magical proclivities can sometimes see him. As a spirit, Deadman is able to pass through solid objects, and appear to fly or float to those whom he appears to. He has the ability to possess any living being, both human and animal, for a limited time. He can control their actions, and is then able to communicate with people in the mortal plane through someone else's body.

He sometimes has trouble controlling the minds of those under post-hypnotic suggestion, and once he departs a host body, those he has possessed retained no memory of the experience. He also sometimes struggles with possessing those with strong minds and wills, like the Batman. As a spirit, he is sometimes susceptible to being controlled by those with magical abilities.

When he was alive, Boston Brand was an Olympic-level athlete and a master in acrobatics. When he was brought back to life and became a White Lantern, his power ring granted him the powers of flight, invisibility, the ability to cloak his presence, teleportation, healing, making solid energy constructs, and the ability to bring beings back to life. When his body was a Black Lantern, that power ring gave his reanimated corpse the power to bring back the dead, but never really fully resurrecting them as they truly were in life. 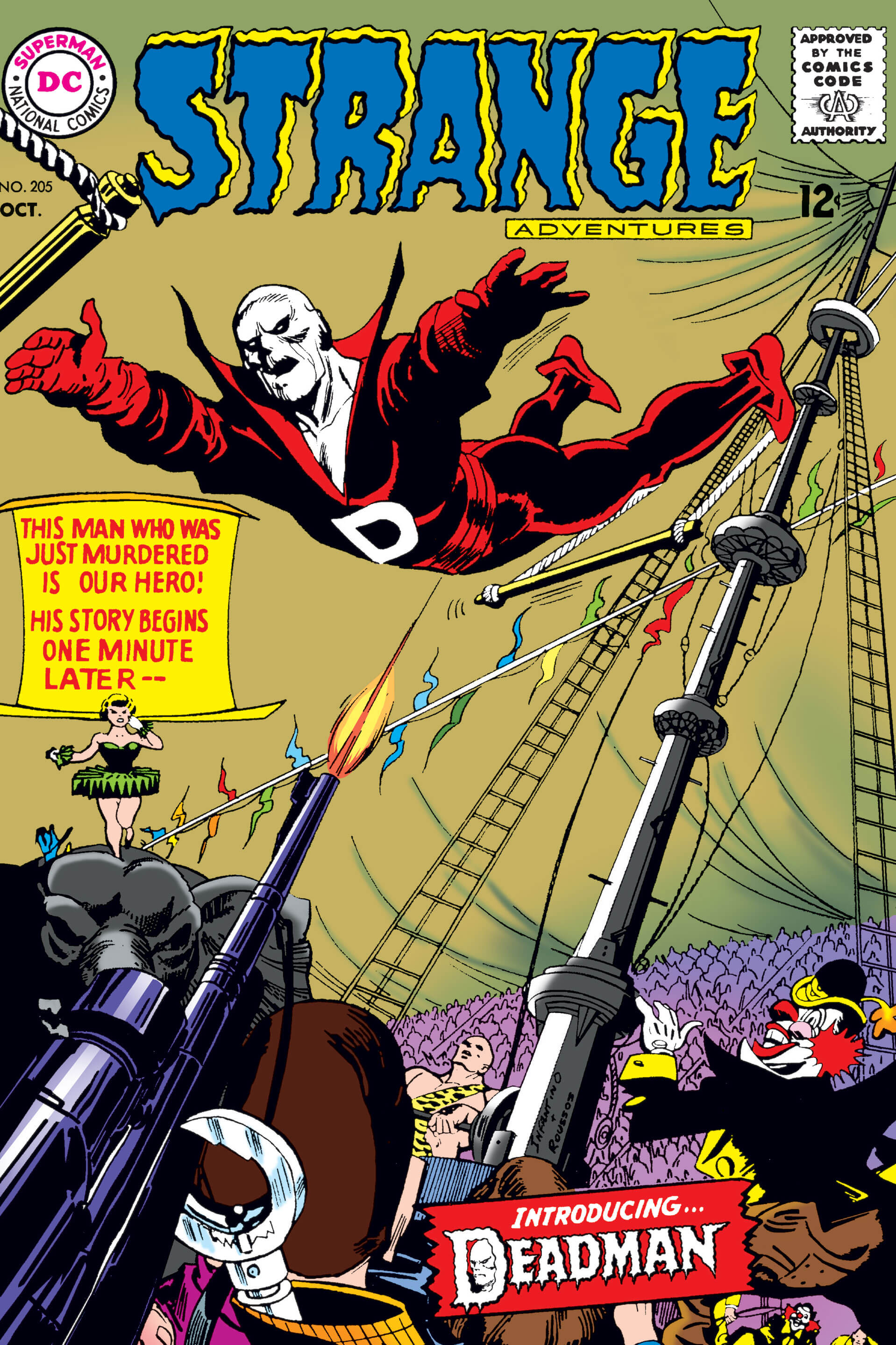 In his first appearance, we get Deadman's full origin story, and see how he goes from murdered trapeze artist to avenging spirit and spectral Super-Hero. In his first adventure as an undead avenger, Deadman takes over the body of Tiny, a strongman in the circus where he once worked, and takes down a drug smuggling ring, after which he embarks on the search for his own killer. 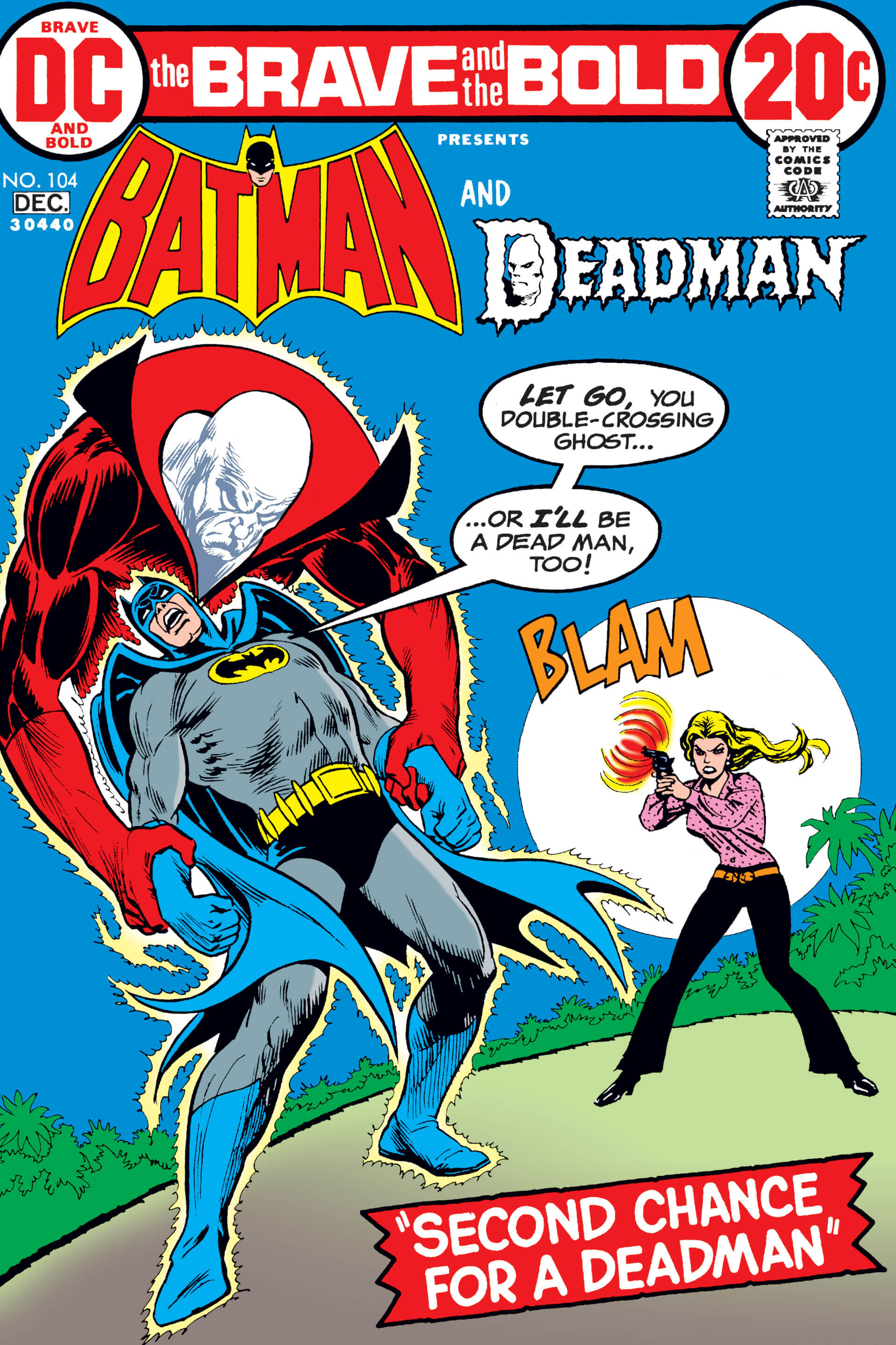 In one of his earliest team-ups with the Dark Knight, Deadman aides the Bat in taking down a ring of criminals, by possessing the body of one of the crooks, and trying to take them down from within. But when he falls in love with one of the female criminals, who is already in love with the man which Boston is possessing, he then double crosses Batman to be with the woman that he now loves. Ultimately though, he kills her to save Batman's life, leaving the Caped Crusader to defeat them alone. 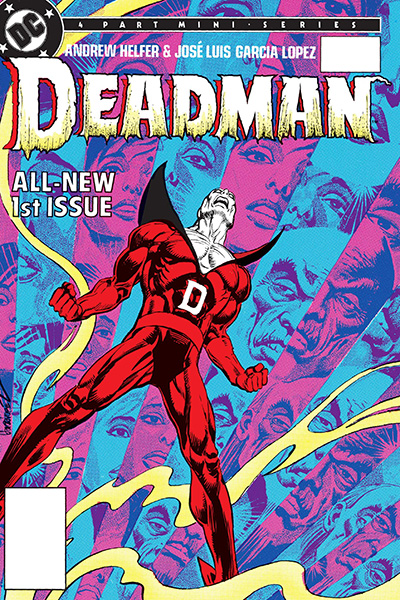 In his second solo series after his run in STRANGE ADVENTURES, and a self-titled mini-series which reprinted those classic stories, Boston Brand returns at last. This time, he reconnects with his twin brother Cleveland, whom he convinces to allow him to take over his body for a brief time, so he can perform as an acrobat once again. But when his brother is killed by Sensei just as he was, he vows to bring his old enemy to justice.

During the BLACKEST NIGHT event, Boston Brand starts to hear his own remains, and those of other dead people, calling for him to protect them. But since he is just a ghost, he can't his stop his body from being raised as a Black Lantern. He tries to possess his own Black Lantern corpse, but can't. He is able to help Earth's heroes defeat the Black Lanterns in the end however, and as a result, is rewarded a new living human body by the power of the White Lantern, in the aftermath of the BLACKEST NIGHT, called the BRIGHTEST DAY. 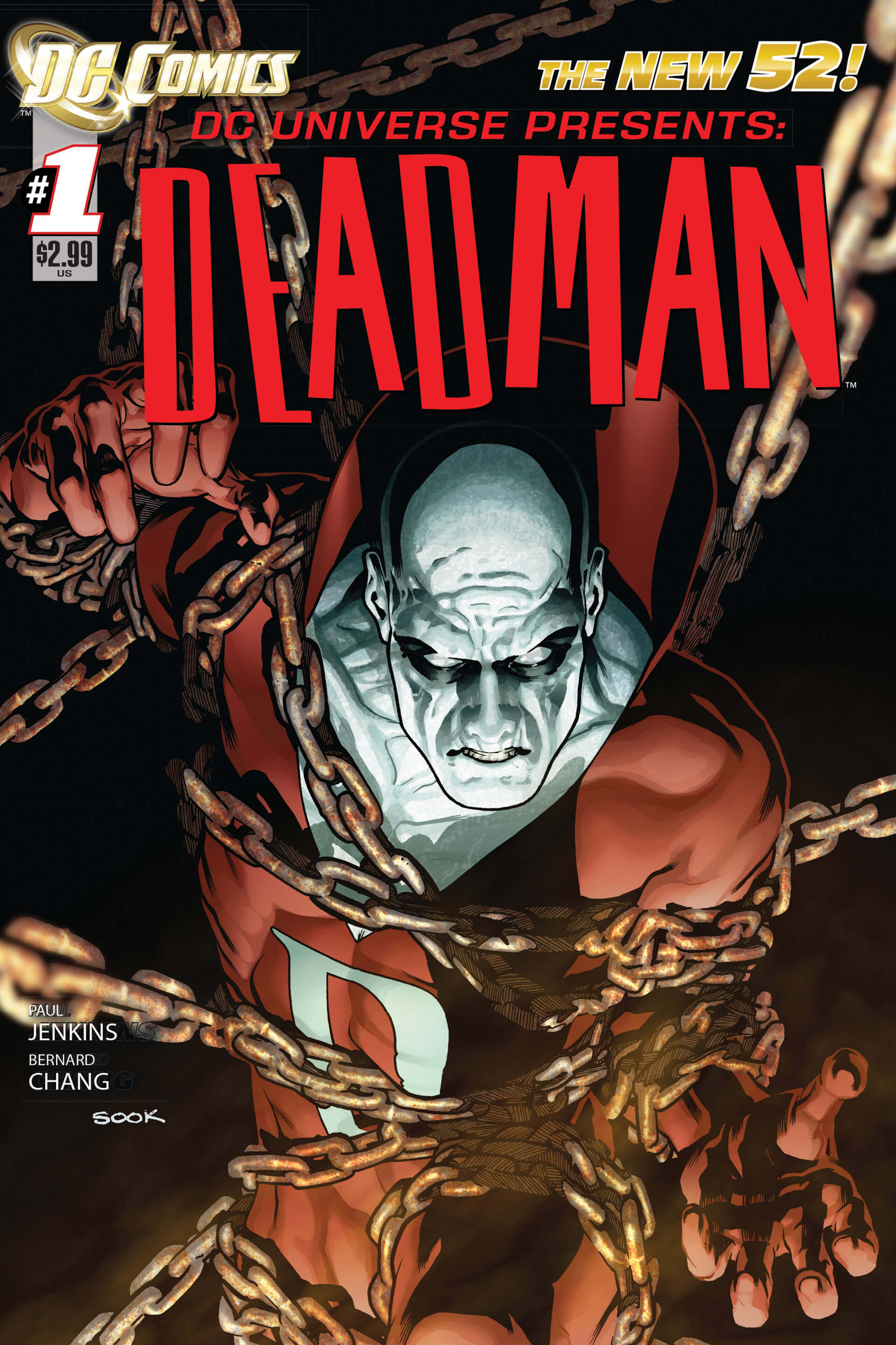 In the post-FLASHPOINT universe, we learn about Boston Brand's revised origin in this story, and find out how his past mortal life before becoming Deadman was filled with abuse, both mental and physical. Becoming a selfish and unkind man, Boston Brand, upon his death, is forced to possess people as Deadman to help people in dire circumstance who need help to fix their own lives, all in an effort to atone for his own.