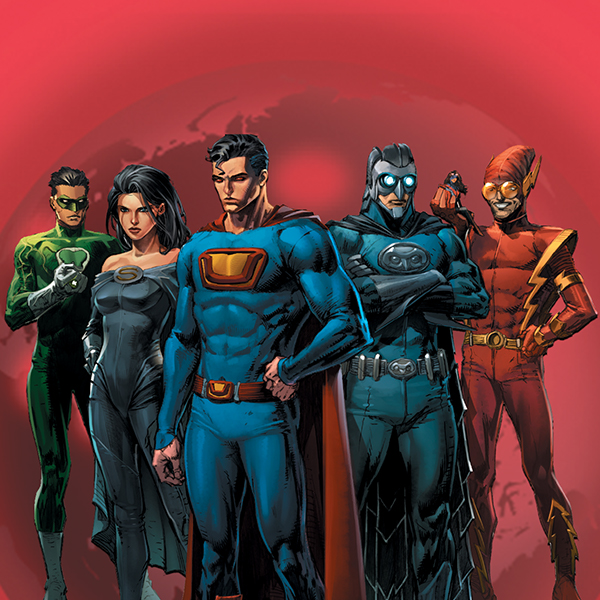 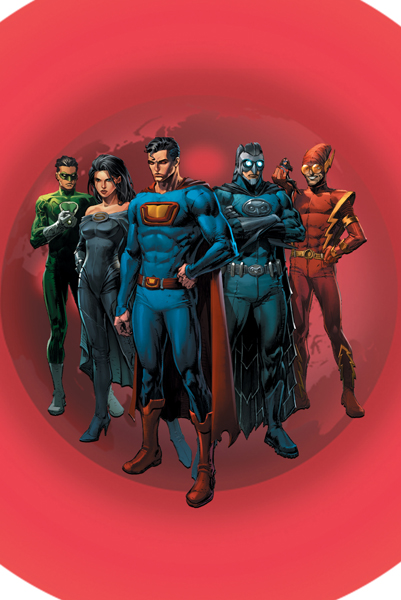 Evil, selfish, and authoritarian, these alternate universe counterparts to the Justice League of America represent the opposite of everything the World’s Greatest Super Heroes stand for.

Evil, selfish, and authoritarian, these alternate universe counterparts to the Justice League of America represent the opposite of everything the World’s Greatest Super Heroes stand for.

The concept of infinite realities introduces the idea of infinite possibilities. What if there was a world where one had a taco for lunch instead of a sandwich? Or if one pursued a different career? Or if every moral decision anyone has ever made in the history of the universe was done in reverse? This was the core idea of “Earth-Three,” a universe where the greatest heroes ever known chose a path of villainy. Ultraman, Owlman, Superwoman, Power Ring -- each member of this alliance of a parallel world’s greatest villains are reminiscent of the heroes known on Prime Earth, but with an inverted sense of character which renders each of them irredeemable. The Crime Syndicate of America is so ruthless in their pursuit of power that it often takes heroes from more than one universe to stop their plans for conquest. But perhaps the greatest tragedy of their existence is that just as the DC Universe always trends towards justice, the Crime Syndicate of America’s universe must always maintain a status quo of evil. 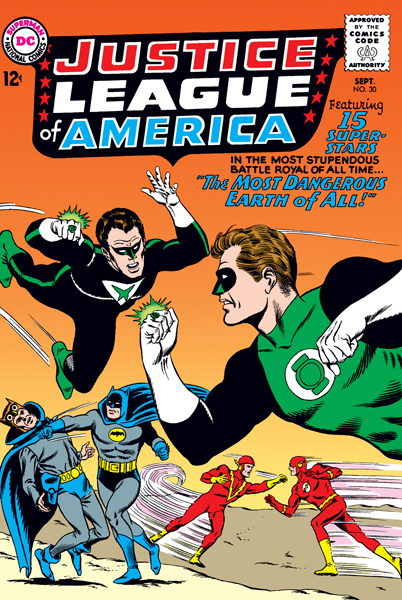 Each member of the Crime Syndicate of America has their own twisted origin, darkly reflecting their Justice League counterparts. Ultraman, last survivor of Krypton, was raised by an abusive rural family and learned to value power above all else. Owlman, born as Thomas Wayne Jr., had his parents and brother Bruce killed in order to exploit their family fortune. Superwoman is the last of Earth 3’s Amazons, having killed all her sisters before leaving to man’s world. Rather than gain his powers in an accident, Earth 3’s speedster Johnny Quick engineered his own super speed, and has developed an addiction to the chemicals which grant him those powers. Power Ring is in truth Volthoom, an ancient Lantern Corpsman trapped inside a ring which feeds off the fear of its host. These core members have an influence which spreads throughout a large network of villainous counterparts to the heroes of the DC Universe. But as Earth 3 perpetually teeters on the brink of extinction, the Crime Syndicate has no choice but to spread their evil through the multiverse for the only value that matters to them: self-preservation. 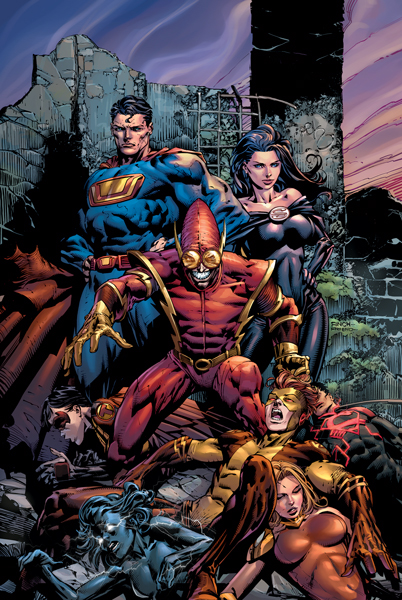 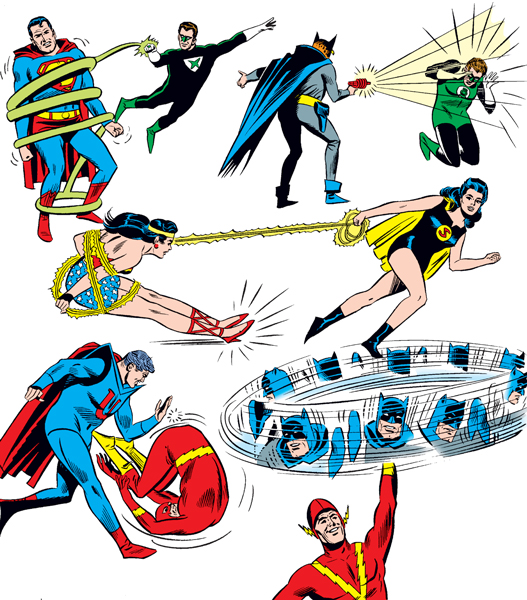 The first time the Crime Syndicate of America challenged the Justice League, it was because they had already completely dominated their own world. With no enemies capable enough to oppose them, the Crime Syndicate yearned for greater challenges. When Ultraman was exposed to a new piece of Kryptonite- an occurrence which gives him new power, as opposed to its deleterious effects on Superman- he gained a new Ultra-Vision sense which allowed him to peer into other realities. Through Ultraman’s Ultra-Vision, the Crime Syndicate learned of the existence of Earths-One and Two, where the Justice League and Justice Society presented themselves respectively as potentially worthy opponents. Ultimately, the Crime Syndicate would prove no match for the combined heroic efforts of Earth-One and Earth-Two, but over the years they would reemerge with the help of like-minded villainous allies, such as the Secret Society of Super-Villains, to challenge the multiverse’s mightiest heroes once more.

However, these campaigns would come to an end in CRISIS ON INFINITE EARTHS. With the rise of the Anti-Monitor, Earth-Three was the first world to fall as the Crime Syndicate abandoned their selfish creeds in a noble but ultimately futile attempt to save their world. Its only survivor: the young son of their heroic counterpart to Lex Luthor, Alexander Luthor Jr. 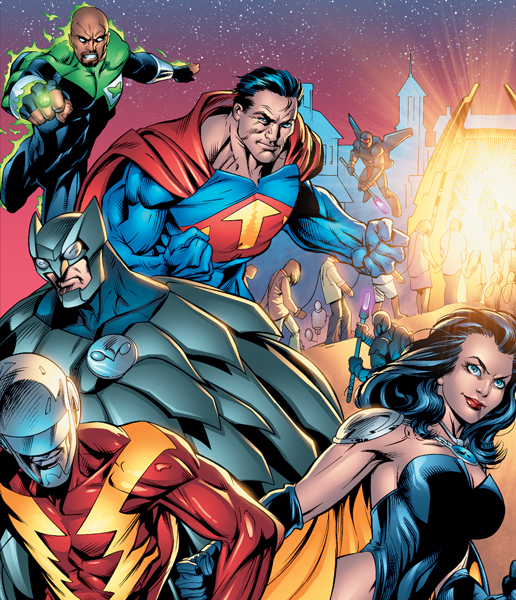 CRISIS ON INFINITE EARTHS spelled the end of the multiverse. And yet, balance dictates that for every positive function, there must be an equal negative. In 2000’s JLA: EARTH 2, the Justice League discovered that a parallel reality to the DC Universe still yet remained: an antimatter counterpart to the universe composed of positive matter. This so-called “Crime Syndicate of Amerika” ruled their antimatter Earth unequivocally, where the prior incarnation merely ran amok unopposed. One of the most recurring points of contention within the Crime Syndicate’s ranks developed during this period: a romantic triangle between Ultraman, Superwoman, and Owlman, where Superwoman would carry out secret affairs with one while publicly involved with the other.

Like Earth-Three before them, the Anti-Matter Universe was left completely devastated by another existential crisis: the INFINITE CRISIS caused in part by Alexander Luthor Jr, Earth-Three’s sole survivor. With the rebirth of a limited multiverse of 52 earths in the crisis’ wake, the Crime Syndicate of Amerika began exploiting these parallel universes in order to rebuild their own -- an effort which was ultimately stopped by a temporarily deified Superman, Batman, and Wonder Woman (TRINITY, 2008-09). 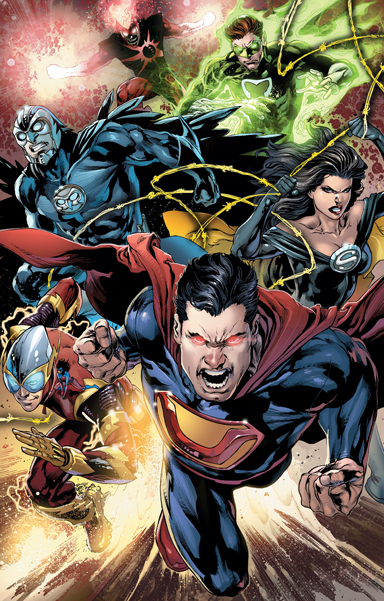 Following the reality-altering FLASHPOINT, the multiverse was restructured once more. A mysterious figure known as Pandora lurked in the background of events unfolding anew, with an ominous box in tow in the form of a three-eyed skull. A figure known as “The Outsider” conspired with a newly assembled Secret Society of Super-Villains to obtain this box, ultimately revealing himself to be Alfred Pennyworth of Earth 3 -- guardian to his world’s Owlman, who had managed to breach the barrier between worlds as Darkseid carved his way through on his own campaign through the multiverse. Using Pandora’s Box, The Outsider created a bridge between the prime DC Universe and Earth 3, allowing a displaced Crime Syndicate of America to claim this unspoiled Earth as their own. With The Outsider’s advanced organization of Earth’s villains, and by trapping the Justice League proper within the Firestorm Matrix, the Crime Syndicate of America was free to do with the Earth as they pleased as evil reigned. It was only the combined efforts of Batman, Lex Luthor, and a handful of other resisting villains that thwarted this campaign for global domination, resulting in the deaths of most of its members. Only five remained: Ultraman, Superwoman, and Owlman, who were all incarcerated; the Cyborg-created G.R.I.D., who subsumed himself back into Cyborg’s programming; and the sentient Power Ring, who found a new host in the agoraphobic Jessica Cruz. 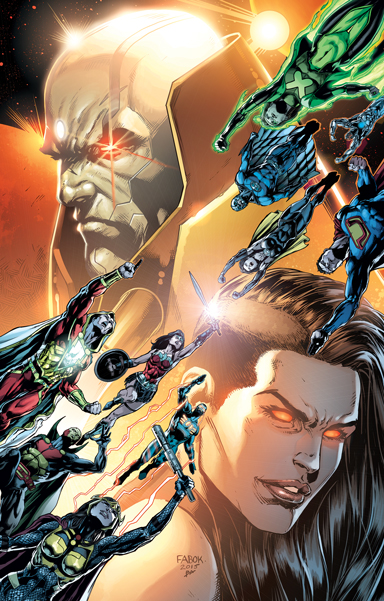 When war began to rage throughout the multiverse between the forces of Darkseid and the unstoppable Anti-Monitor, the Justice League learned the true reason for the Crime Syndicate’s prior campaign: as he had done once before in CRISIS ON INFINITE EARTHS, the Anti-Monitor had already devastated Earth 3, leaving the Crime Syndicate in search of a new home to conquer. As the battle spilled over to the DC Universe proper, the Anti-Monitor destroyed the physical incarnation of Darkseid and unleashed a new “Godwave” effect, transmuting members of the Justice League into New Gods. The remaining Justice League members were left with no choice but to team up with the remaining members of the Crime Syndicate -- including a heavily pregnant Superwoman, with the child of Earth 3’s Lex Luthor. Both Ultraman and Superwoman died on the battlefield against the Anti-Monitor, but not before she gave birth to a baby who would become a new vessel for the spirit of Darkseid. The tormented Jessica Cruz gained the courage she needed to overpower Volthoom and overcome her fate as the new Power Ring, proving herself worthy as the newest inductee to the Green Lantern Corps. Of all people it was Wonder Woman’s flame Steve Trevor who ultimately vanquished the Anti-Monitor and saved the Justice League, armed with the power of the Anti-Life Equation.

Of the original Crime Syndicate, only Owlman and G.R.I.D. survived, claiming as their prize the Mobius Chair: the seat of all knowledge in the universe. But upon their attempt to use it, they were wiped from existence by an azure godlike being, and reset to a newly reborn Earth 3.