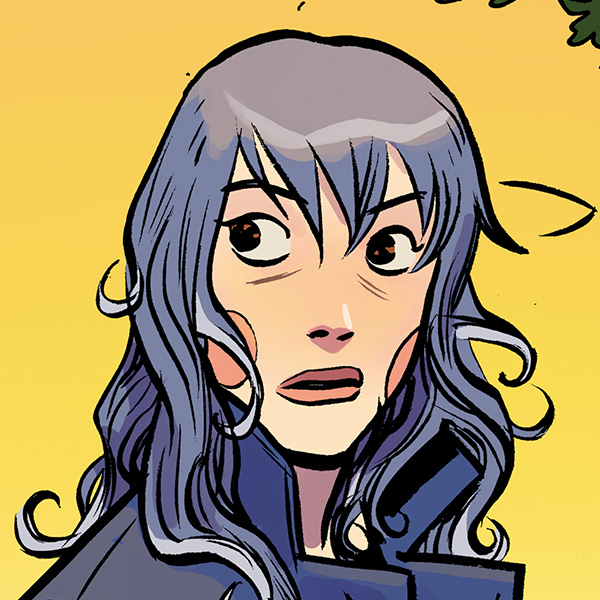 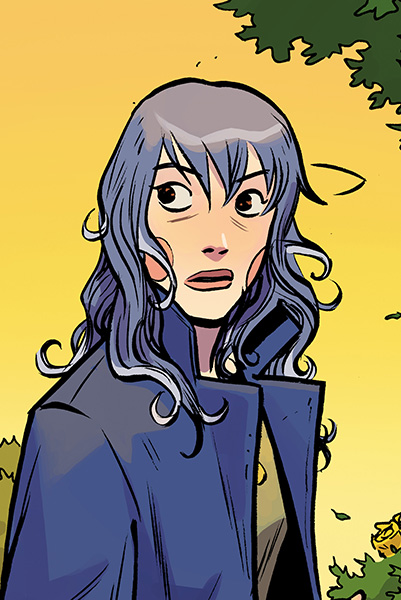 Kay Challis' dissociative identity disorder is different from that of anyone else, as each of her 64 extra personalities has its own super power.

Kay Challis' dissociative identity disorder is different from that of anyone else, as each of her 64 extra personalities has its own super power.

The Dc Super Hero team known as the Doom Patrol has always been home to those who are more outcasts and freaks than traditional Super Heroes, and none have been more non-traditional than the woman nicknamed Crazy Jane. Born Kay Challis, her backstory is more tragic than most. Abused repeatedly as a child, her mind began to cope by fragmenting into multiple personalities, which ultimately led her to being institutionalized. While there, an alien "Gene Bomb" went off, granting people with latent metagenes super powers. But in Kay's case, all 64 of her personalities had different abilities, making her one of the most formidable metahumans on Earth.

Her dominant personality was that of Jane Morris, later “Crazy Jane,” and Dr. Niles Caulder recruited her into his team the Doom Patrol, during a time when the team had some of their most surreal missions. After many adventures together, she formed a close relationship with Cliff Steele, a.k.a. Robotman, and the two eventually went off together to explore new and different realities. Despite many setbacks, Crazy Jane came to accept her mental illness. No longer looking for a way to cure it, she is happy just managing it. Although no longer an active Super Hero, any one of Jane's 64 personalities will still emerge to protect an innocent in danger. 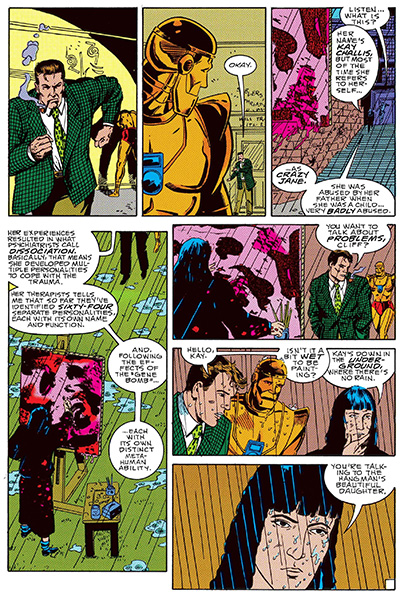 Born as Kay Challis, the woman who would grow up to become Crazy Jane would suffer a horrific childhood. Starting when she was only five years old, Kay Challis was molested by her father. The first time this happened, she was putting together a jigsaw puzzle, and the image of the puzzle would imprint on her mind, and help her cope with her abuse years later. As her suffering continued, Kay eventually withdrew completely into her own mind, and is replaced by an alternate personality that went by the name "Miranda."

During one Easter Sunday years later, Miranda was sexually assaulted in a church, which triggers flashbacks to her former childhood abuse, and which ultimately destroys the "Miranda" personality. This results in a massive fragmentation of her psyche, like pieces of a jigsaw puzzle. Kay now developed at least 64 different personalities, some which were prominent, and others which were deeply buried. Soon after, Kay is committed to a mental institution when she can no longer cope with her trauma. It's during this time that the alien race called the Dominators invade the Earth, and attempt to active all the latent metagenes on the planet with what they call the "Gene Bomb." When it is detonated, almost all 64 of Kay's personalities develop super powers.

Each of Kay's personalities gained a different ability unique to them. There's the angry "Black Annis" who has razor sharp claws, Scarlet Harlot, who projects ectoplasmic bursts and absorbs sexual energy, and "Sun Daddy," a gigantic figure with a sun for a head and with the ability to create fireballs. And these are just the tip of the iceberg. The dominant personality goes by the name Jane Morris, who is later given the nickname Crazy Jane, an homage to a famous 19th century painting and a series of poems by William Butler Yeats.

The Super-Hero Cliff Steele, also called Robotman, suffered terrible losses during the alien invasion, which killed several of his Doom Patrol teammates, and as a result, he was suffering emotionally. While staying in the same institution as Jane, Dr. Will Magnus, creator of the Metal Men, asked Cliff to look after her, as she was coping with becoming a metahuman. This ultimately led to Jane being asked by Dr. Niles Caulder into becoming a member of the new Doom Patrol.

As a member of the Patrol, Jane formed a close bond with Cliff, during an era when the team had many wild adventures, fighting against the likes of the Brotherhood of Dada, the Scissormen, and the Beard Hunter. The team eventually settled in a place called "Danny the Street," a living transvestite street, with which Jane found a particular affinity for. During her time with team, Jane journeys back to the home she lived in as a child, and she confronted her own traumas and eventually overcame them. Because of her newfound inner peace, her personalities integrate into different facets of a more complicated single being.

During one Doom Patrol adventure, Jane was attacked by the creature known as the Candlemaker, who tossed her into another dimension. In this world, which was similar to ours, she was diagnosed as being schizophrenic, and tortured with shock therapy. Cliff was finally able to rescue Jane from this dimension, and he and Jane relocated to the newly dubbed Danny the World. Not long after, it was revealed that all of Jane's other personalities actually still existed, which led to many arguments with Cliff. He left Danny the World and returned to Earth, but Jane stayed behind

When a group of cross dimensional gentrifiers tried to alter Danny the World to their own liking, he reconfigured himself into Danny the Brick to escape them. Jane returned with Danny to Earth, and sought sanctuary with her old friends the Doom Patrol, now residents of Oolong Island. During this time, yet another personality of Jane's makes itself known. This personality starts a cult and plans to spread Jane's personalities among the sixty-three cult members, and then kill the cultists. The Doom Patrol stops her, and the Jane Morris personality returns and dominates the other 63 personalities once more. Jane now fully accepts her mental illness, and instead of trying to cure it or suppress it, she has chosen to simply try to manage it. 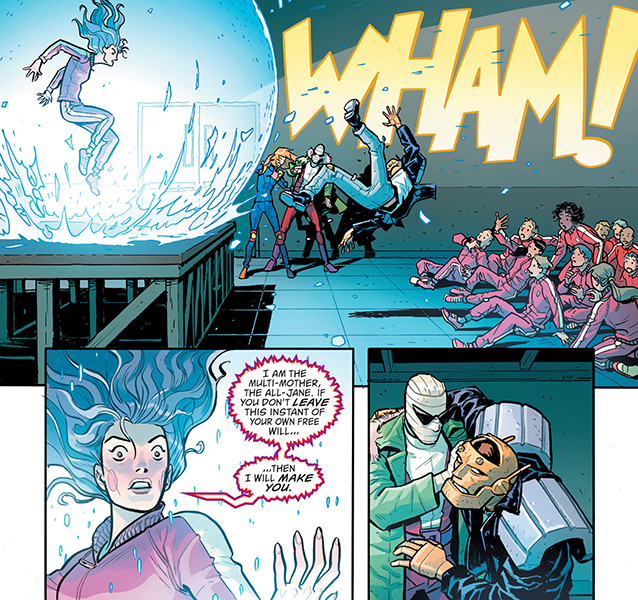 Crazy Jane has 64 different personalities, almost all of which have their own unique abilities. The Jane Morris personality has no metahuman powers that we know of, but she controls all the others to a certain extent. Among the more notable are the following:

Sun Daddy:  A giant with a sun for a head, who can throw fireballs.

Sex Bomb:  Who explodes into energy when sexually aroused.

Lucy Fugue:  This personality has radioactive bones and see-through skin.

Lady Purple:  Can sense the future.

Daddy:  A recreation of Jane's father as a giant monster. This personality was destroyed.

Driver 8:  Conductor of the Underground subway

Some of Jane's personalities have so far stayed dormant, while others have not shown what their powers are just yet. 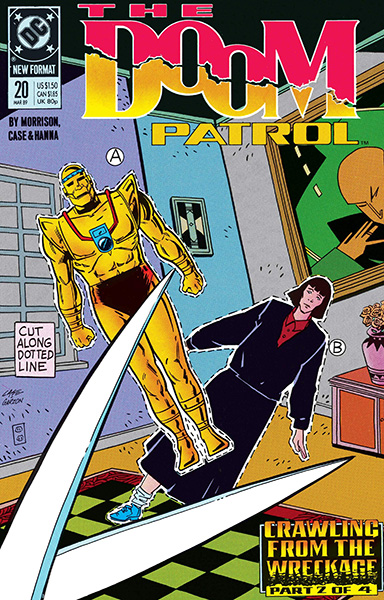 The storyline that introduced Crazy Jane to the Doom Patrol was 1989's "Crawling from the Wreckage", in which she began as a mental patient staying in the same hospital as Robotman. Recently realizing she has powers, she joins the new Patrol on their first adventure, where they face off against the Scissormen, part of "philosophical location" that has escaped and threatens to engulf all of reality. 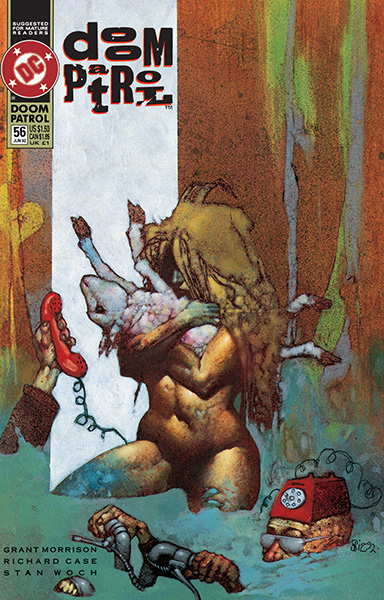 Jane goes back to the source of all her trauma in this issue, when she returns home to the farm she grew up on, and to the well where her father once abused her. By finally confronting her pain, she begins to integrate her disparate personalities into one, at least for a time. 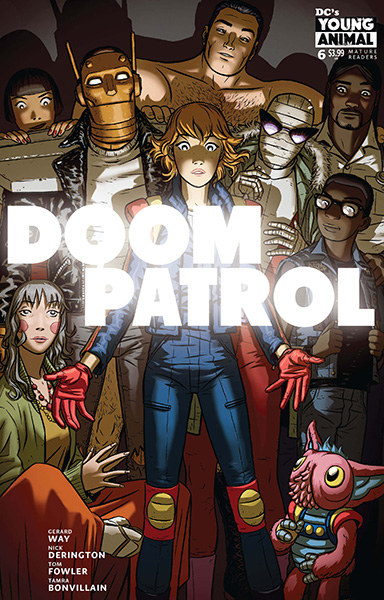 After many years away, Crazy Janes returns to her old friends in the Doom Patrol, along with her friend Danny the Brick, who was once Danny the World, and before that, Danny the Street. But Jane has changed since her time away, and Cliff realizes that her multiple personalities have reemerged, and that Jane may no longer be in control anymore.