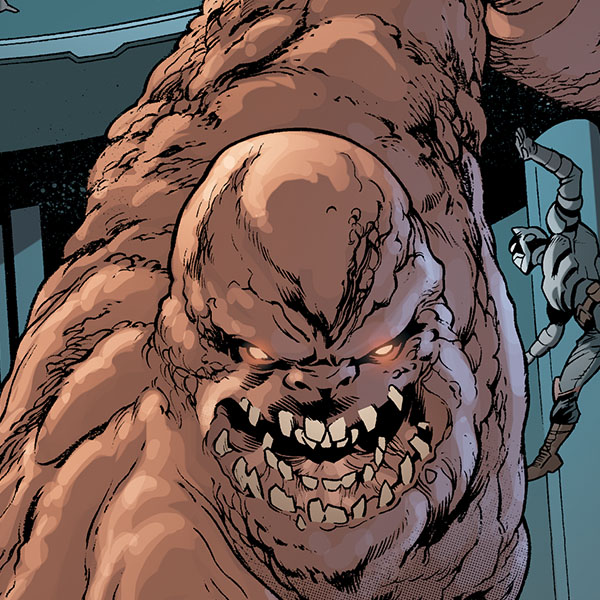 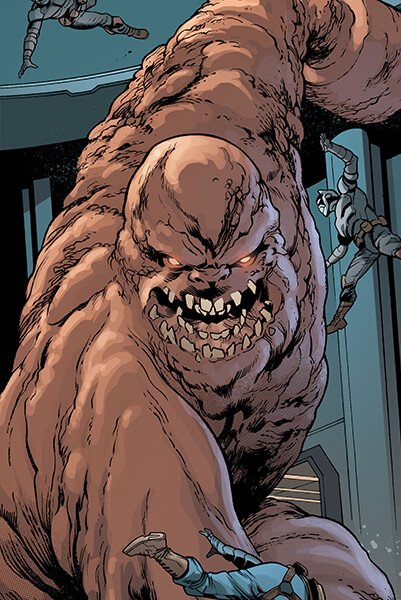 The tragic Clayface is a virtually indestructible shape-shifting monster who's both threatened Gotham City and served as an ally to Batman.

The tragic Clayface is a virtually indestructible shape-shifting monster who's both threatened Gotham City and served as an ally to Batman.

In Gotham City, people are never quite what they seem—sometimes literally. As one of the most skilled and dangerous shape-shifters in the DC universe, Clayface is a complicated and multifaceted rogue who oozes in and out of different roles with the fluidity of the mud that makes up his body.

Numerous beings have held the name Clayface, including the victim of a tragic accident and a crook who unlocked the secrets of magical clay to grant himself powers. The Clayface story is constantly evolving and pulling new people into the muck and mire. With a total of eight different characters officially holding the mantle at one time or another, knowing just whom—and what—to expect from a Clayface can be a tricky affair. Virtually indestructible, criminally devious and brilliant at improvisation, even the most harmless-looking incarnations of Gotham’s resident mud-based monster represent a massive potential threat—one that Batman must grapple with regularly to keep his city safe.

The current version of the original Clayface, Basil Karlo, began as an up-and-coming movie star set to take on a breakout part as the villain in a film about a jealous actor who kills the people who landed the roles he wanted. Before the movie began filming, however, Basil was in a car accident that left the majority of his body horribly disfigured and scarred.

Mad with grief and desperation, Basil began using an experimental cosmetic chemical called “Re-Nu” to conceal his deformities. But when the chemical was taken out of production, he began going mad. His tenuous grasp on sanity crumbling, he attacked the plant that produced Re-Nu, demanding more of it—all the while ignoring the clear side effects its use was having on his body. During the heist, he was thwarted by Batman, but the arrest wasn’t enough to stop him. Too far gone to understand he was headed down a road from which he could not return, Basil broke into the courthouse holding the Re-Nu as evidence and was eventually doused in the entirety of the remaining chemical.

The results were horrifying. Basil’s body was completely melted down into a mud-like clay, capable of shape-shifting and size-changing. But with this transformation came the final break in his already-fractured mind. Clayface was officially born. 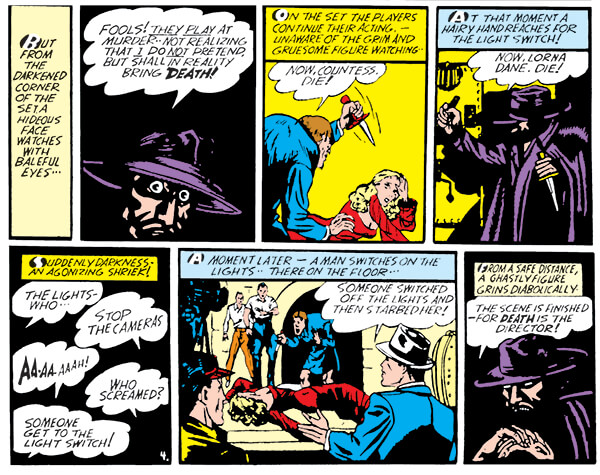 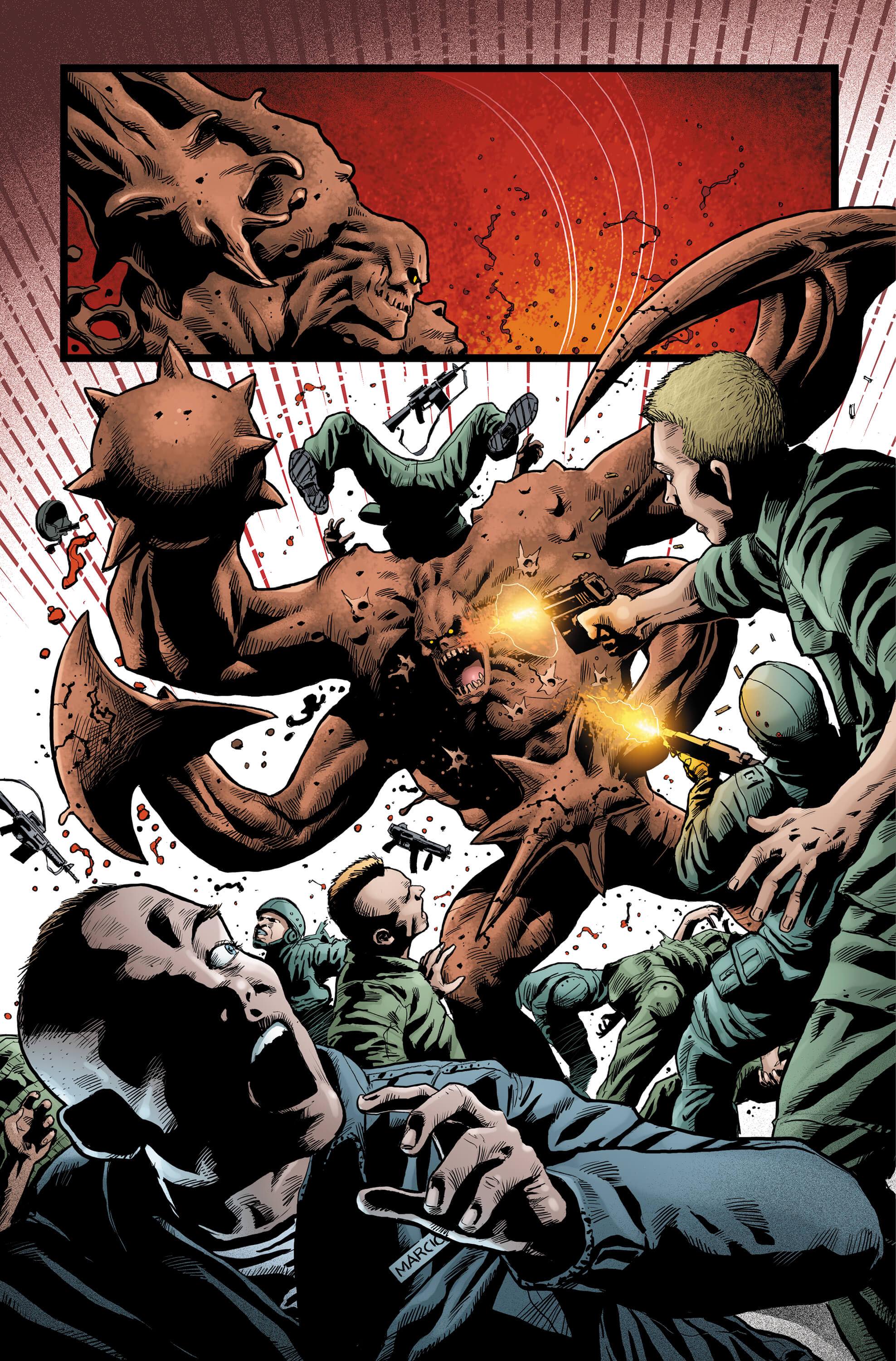 Clayface’s body is composed entirely of malleable “clay,” which can assume any form, liquid or solid. Basil is able to manipulate his size, divide himself into duplicates and control his density. He is functionally invulnerable, able to reconstitute himself after any physical trauma and only vulnerable to extreme heat or cold, which paralyze his shape-shifting abilities and allow him to be shattered or stunned.

Clayface’s duplicates have shown the ability to become sentient and autonomous if not reconstituted into his primary body. 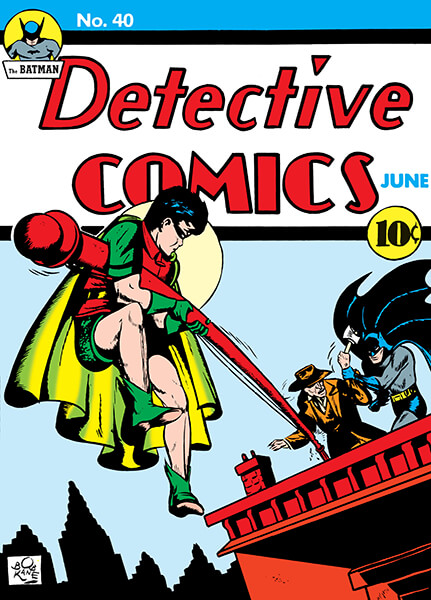 Originally, Basil Karlo didn’t have any supernatural abilities. In his first appearance in DETECTIVE COMICS #40 (1940), he was depicted as an insane and jealous B-list actor who wore a costume from a movie he’d once worked on. With no special abilities or powers, Basil relied on staging murders based on scenes from movies, before he was finally brought to justice by Batman.

Chronologically, the first version of Clayface to display monstrous powers was Matt Hagen, who debuted in DETECTIVE COMICS #298 (1961). Hagen was a treasure hunter and a thief who specialized in procuring rare and valuable items, selling them off to less-than-reputable buyers. During one mission, Hagen inadvertently fell into a pool of magical, clay-like “protoplasm,” which covered his body and gave him special abilities. The effects of the pool were not permanent, however, and Hagen would have to return to the pool time and time again to “recharge.”

Hagen promptly decided to use his powers in his criminal activities, which quickly caught the attention of Batman and Robin. The Dynamic Duo deduced they could use water and ice to weaken Hagen in his empowered form, and were thus able to send him to prison. Hagen wasted no time in staging various escapes, after which he would inevitably return to the clay pool to re-empower himself and begin another crime spree.

In DETECTIVE COMICS #312 (1963), Batman and Robin uncovered the source of Hagen’s powers and destroyed the pool. Unable to accept returning to a life of normal, decidedly non-clay-based crime, Hagen focused his efforts on trying to chemically re-create the pool’s effects. He was successful, but during his trials and experimentation he inadvertently allowed one of his blood samples to fall into the hands of the third Clayface, Preston Payne—who used it to empower himself in DETECTIVE COMICS #478 (1978) while searching for a cure to a genetic disease he suffered from.

Payne did not have shape-shifting abilities, however, and his body nearly disintegrated into a pile of mud. He created an exo-suit to keep himself together (literally) after experiencing another side effect: his touch could melt anyone who touched his skin, something he discovered after coming into contact with his girlfriend. She did not survive the experience, and neither did Payne’s sanity.

Payne was committed to Arkham Asylum, while Hagen was eventually killed by Shadow Demons during the CRISIS ON INFINITE EARTHS in 1986. 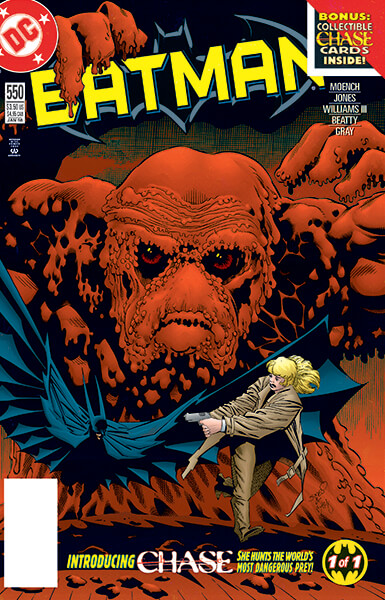 Basil Karlo inherited the Clayface mantle yet again following the Crisis on Infinite Earths, joining another Clayface, Sondra Fuller, or “Lady Clay,” who was introduced as a villain in THE OUTSIDERS #21 (1987). Fuller, who had voluntarily agreed to undergo an experimental procedure to grant her Matt Hagen’s powers, met Karlo in prison, where she convinced him to form the “Mud Pack,” a cabal of the existing Clayfaces—including Payne and the muddy remnants of Matt Hagen—to take on Batman (DETECTIVE COMICS #604, 1990).

The Mud Pack failed, but not before Basil used samples of both Fuller and Payne’s blood to transform himself into the “ultimate” Clayface, with a shape-shifting, mud-based body he retained permanently.

From that point on, Clayface became a fixture of the Gotham City underground, perfecting his shape-shifting abilities to trick and manipulate the Batman Family as he moved in and out of Arkham Asylum.

In SHADOW OF THE BAT #27 (1994), it was revealed that Payne and Fuller escaped prison after the Mud Pack’s failure and fell in love. Fuller’s abilities allowed her to withstand Payne’s toxic touch, and the two conceived a child—Cassius Payne—who was born with versions of both his parents’ abilities, as well as the ability to spawn sentient duplicates or “Clay-Things” out of his body.

One such autonomous Clay-Thing came in the form of Dr. Peter Malley, who was created from a skin sample pulled from Cassius (BATMAN #550, 1998).

Later, two more Clayfaces were introduced—Todd Russell (introduced in CATWOMAN #1, 2002), who was given his powers thanks to military experimentation, and Johnny Williams (in BATMAN: GOTHAM KNIGHTS #60, 2005) who was a firefighter caught in a chemical explosion. 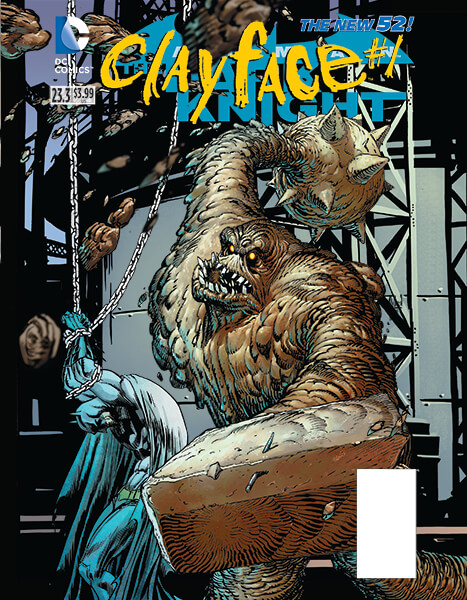 Following the events of 2011’s FLASHPOINT, the Clayface family tree was largely condensed once more down to Basil Karlo, who retained his monstrous, clay-based powers following the continuity reimagining. His abilities were bolstered with the addition of a power to mimic the DNA of the people he copied. He attempted to impersonate Bruce Wayne in an effort to take over Wayne Enterprises, but was thwarted by Batman.

After the events of DC UNIVERSE: REBIRTH #1, Basil was reimagined yet again. In DETECTIVE COMICS #934 (2016), Basil escaped Arkham, not to go on a criminal rampage but to sneak into a theater to watch one of his own movies. Full of self-loathing and regret for his actions, this interpretation of Basil was more victim than villain—something that Batman saw and noted as he recruited Clayface onto his newly formed team of burgeoning vigilantes led by Kate Kane and Tim Drake.

Basil adjusted to the change from rogue to hero poorly at first, grappling with his inability to see himself as anything but a monster. But with the help of his new team—including Cassandra Cain, Stephanie Brown, and Luke Fox—Basil came to see himself as someone capable of good.

Basil’s abilities were used with the help of Tim Drake to create the “Mud Room,” a training facility within the team’s base of operations (a.k.a. the Belfry), in which Basil would use his clay form to create constructs and simulations for his teammates to fight. Sadly, medical testing revealed that his brain was slowly deteriorating when he stayed in his clay form, and would eventually drive him to become the mindless monster he feared himself to be.

When the time came that Basil could no longer control himself, Kate Kane used an experimental weapon designed to put him down. Kane was removed from the team for her actions, and with Clayface gone it wasn’t long before the Gotham Knights all went their separate ways. After the team’s dissolution, a somehow re-emergent Clayface appeared briefly to show his end may not have been as final as the Knights had thought… but that he would retreat from Gotham until he could truly get himself under control. (DETECTIVE COMICS #969-981)