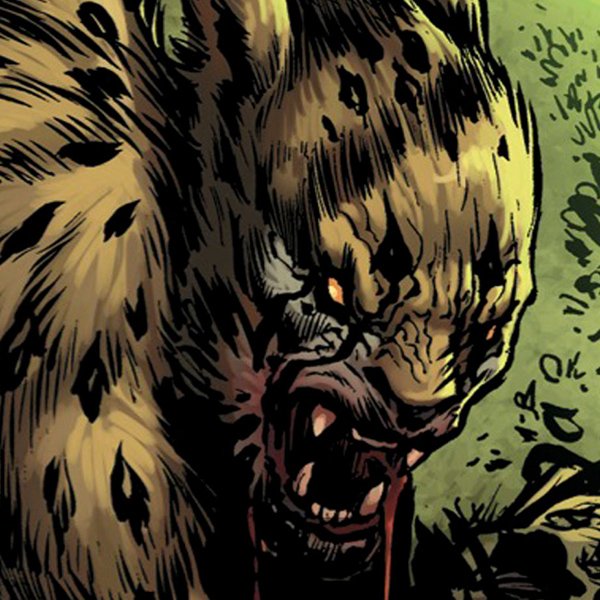 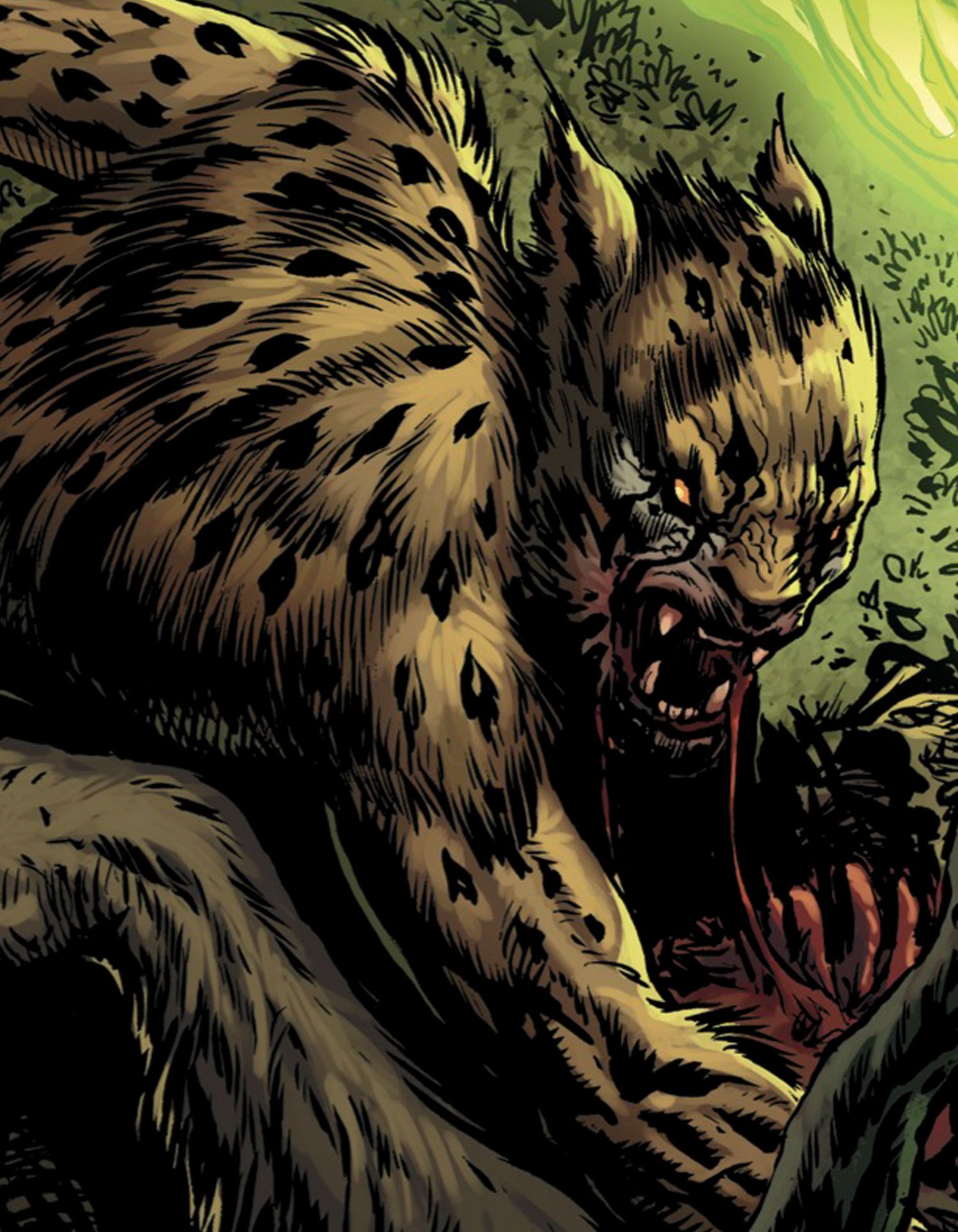 Alternately enemy and ally to Wonder Woman, The Cheetah forever seeks a balance between her human and animal natures.

Alternately enemy and ally to Wonder Woman, The Cheetah forever seeks a balance between her human and animal natures.

Archaeologist Barbara Ann Minerva always had a reputation for going to any lengths to retrieve the artifacts she was after, no matter the risk. Her attitude, unsurprisingly, resulted in tragedy. After growing increasingly obsessed with mythology and divinity, Barbara Ann took her team deep into the wilds of Africa, only to be trapped and forced to participate in an ancient, arcane ritual that cursed and transformed her into a human-cheetah hybrid with a lust for blood.

Once a friend of Wonder Woman’s, Barbara Ann blamed her transformation on Diana’s inability to save her, and harbored a grudge against the Super Hero that drove her to the point of madness.

Prior to Barbara Ann’s turn, two other women held the title of the Cheetah: Priscilla Rich and her niece, Deborah Domaine—both of whom served as enemies of Wonder Woman in the Golden, Silver and Bronze Ages. 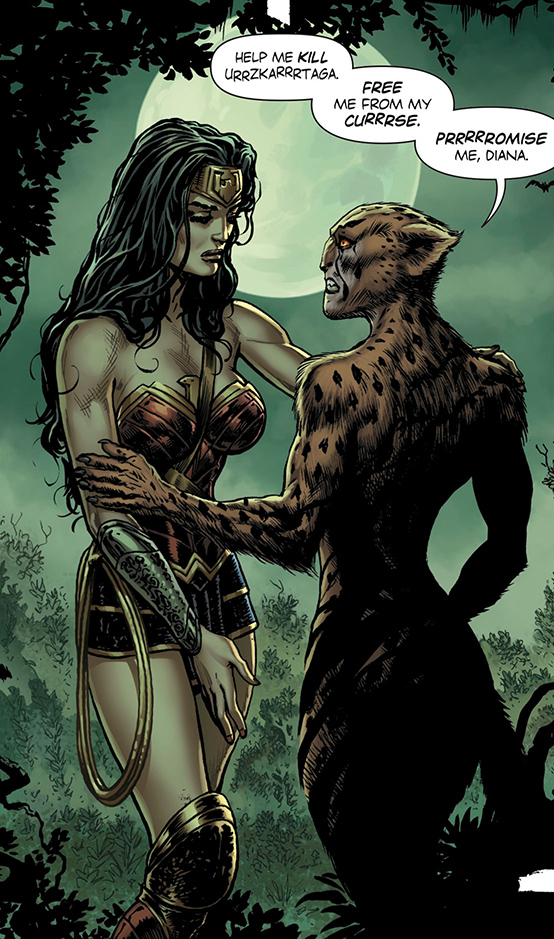 The original Cheetah, Priscilla Rich, was a government employee during World War II who harbored a deep resentment of Wonder Woman’s fame. This drove Priscilla to attempt to kill the Amazon, but her botched scheme left her injured and even more troubled. Unable to cope with the trauma and her jealousy, Priscilla developed a “split personality” in which she would dissociate and adopt the Super-Villain moniker “The Cheetah.”

Priscilla would eventually pass her mantle down to her niece, Deborah Domaine, a radical environmental activist who functioned as the Cheetah throughout the 1980s, after she was forcibly brainwashed by the terrorist organization Kobra.

The modern incarnation of the Cheetah fell to a woman named Barbara Ann Minerva, an archaeologist whose obsession with her work led her to uncover a dangerous tribal cult. The cult forced Barbara Ann to perform a ritual that transformed her into a bloodthirsty humanoid monster, doomed forever to be a slave to her own cannibalistic cravings. Believing Wonder Woman could have saved her from this fate, Barbara Ann became consumed with vengeance and a resentment toward Super Heroes. 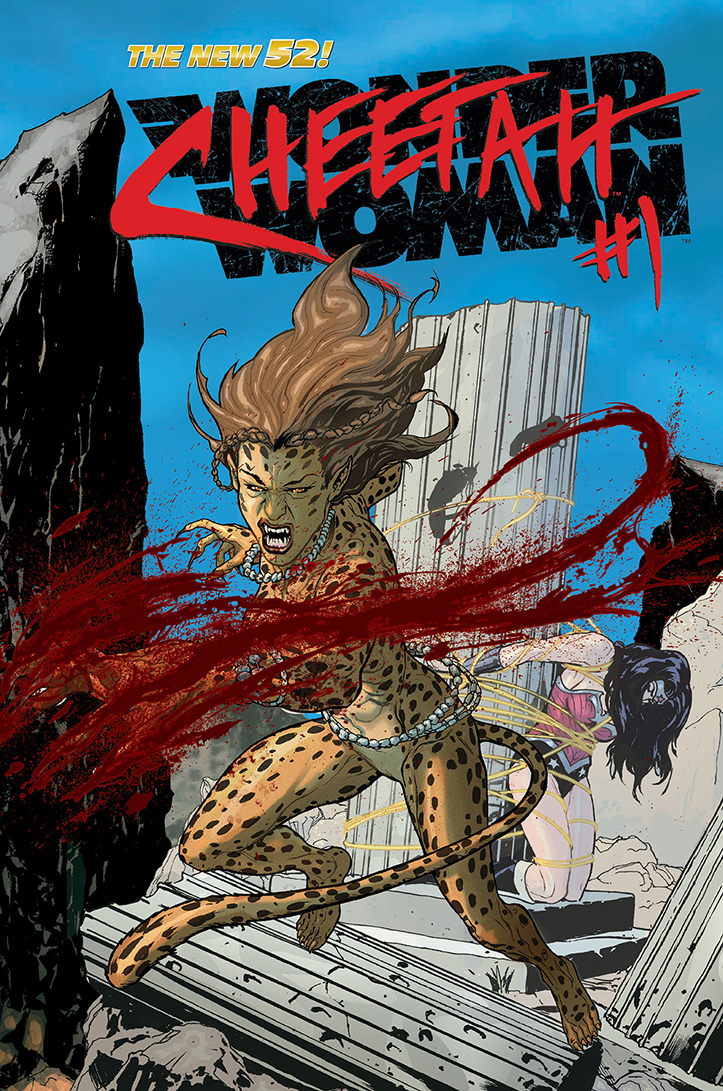 Both Priscilla and Deborah had no powers nor superhuman abilities, though they both possessed peak human agility, strength and reflexes.

Barbara Ann’s abilities stemmed from her connection to the plant god Urzkartaga. In her original incarnation, she was able to control her transformation into the Cheetah. In this form, Barbara Ann had enhanced endurance and strength, claws and fangs, and superhuman speed.

Later, Barbara Ann lost her ability to transform back to her human self, but retained all her other metahuman abilities. Along with her bloodlust. 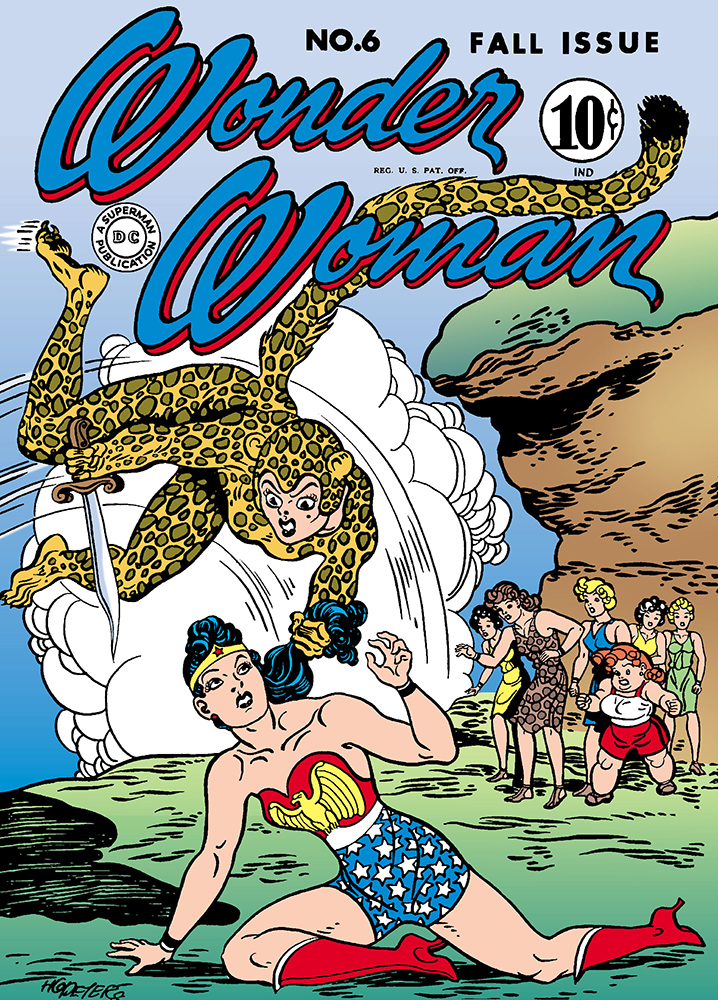 Priscilla Rich was a debutante who worked for various charities during World War II, but her motivations were anything but pure. Hungry for recognition and fame, Priscilla resented the fact that Wonder Woman had become so beloved, and designed a trap to rid the world of her for good—all while making herself look like a hero.

Unfortunately for her, Priscilla’s plan backfired, leaving her in danger and forcing Wonder Woman to come to her aid—thus making Priscilla’s rival look like even more of a hero than she had before. Unable to cope with this turn of events, her fragile mind fractured, splitting her personality into that of mild-mannered Priscilla and that of the Cheetah.

As the Cheetah, Priscilla wore a cat-themed costume and made every effort to thwart Wonder Woman’s heroic exploits, framing her for theft, launching smear campaigns and even attempting to infiltrate Paradise Island.

Deborah Domaine, the niece of the original Cheetah, was introduced as a potential ally to Wonder Woman. A passionate activist, Deborah met Diana Prince while working to clean up an oil spill, and the two became fast friends.

However, this comradery didn’t last. Shortly after Priscilla’s death, agents from the terrorist organization Kobra sent operatives to enlist the help of the Cheetah. With Priscilla dead and Deborah having just recently learned of her aunt’s terrible secret, the Kobra operatives kidnapped Deborah instead. They subjected her to various brainwashing techniques until she was able to act as a new Cheetah; first under Kobra’s control and later as a free agent and member of the Secret Society of Super-Villains.

Deborah operated as the Cheetah until the events of 1985’s CRISIS ON INFINITE EARTHS. 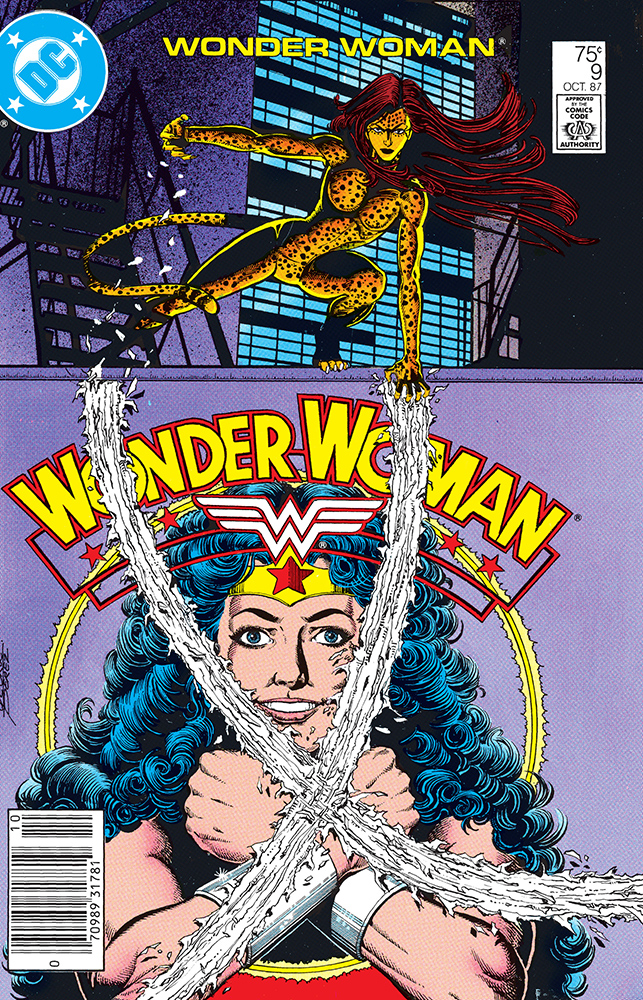 Barbara Ann Minerva was first introduced as a wealthy heiress and archaeologist who fell victim to an ancient ritual. She was transformed into a frail, weak woman who could become a powerful human-cheetah hybrid—with the caveat that in her Cheetah form, she would be overwhelmed by an insatiable bloodlust.

Barbara Ann became aware of Wonder Woman after her transformation, when she learned of Diana’s mythical Lasso of Truth, which she believed to be an important archaeological artifact. She nearly succeeded in stealing the Lasso (WONDER WOMAN vol. 2 #9, 1987), which prompted her to reveal her form as the Cheetah to Diana for the first time.

Years later, after the events of INFINITE CRISIS (2007), Barbara Ann was visited by the goddess Circe, who gave her a potion that would allow her to remain in her Cheetah form permanently while simultaneously achieving more control over her bloodlust. Barbara Ann accepted this deal, but didn’t realize that the potion would also make her a slave to Circe’s will. Furious, she did everything in her power to thwart Circe, going so far as to ally herself with Wonder Woman temporarily in an attempt to break the spell.

During this time, Barbara Ann had her powers stolen by a man named Sebastian Ballesteros, who, operating as an agent for Circe, submitted himself to the plant god Urzkartaga, making the case that he could succeed where Barbara Ann had failed. He became a new version of the Cheetah until Barbara Ann herself killed him to regain her abilities.

Later, free of Circe’s control, Barbara Ann joined the Injustice Society and formed her own branch of the Secret Society of Super-Villains, in which she remained throughout the events of FINAL CRISIS (2009) and FLASHPOINT (2011).

Barbara Ann remained the Cheetah through the new continuity of the New 52, but her origin story was altered. She was given a connection to the Amazons and Wonder Woman prior to her descent into villainy. This new Barbara Ann had grown up in an all-female community known as “Amazonia,” where she became an expert in divine relics.

When she was cut by a ritual dagger, Barbara Ann became possessed by the “Goddess of the Hunt,” which transformed her into a half-human, half-cheetah hybrid. A scratch from her claws could create similar transformations in other individuals, including Super Heroes.

During 2013’s FOREVER EVIL event, the Cheetah teamed up with other animal-themed Super-Villains, which she called her “menagerie,” but was defeated by Steve Trevor. 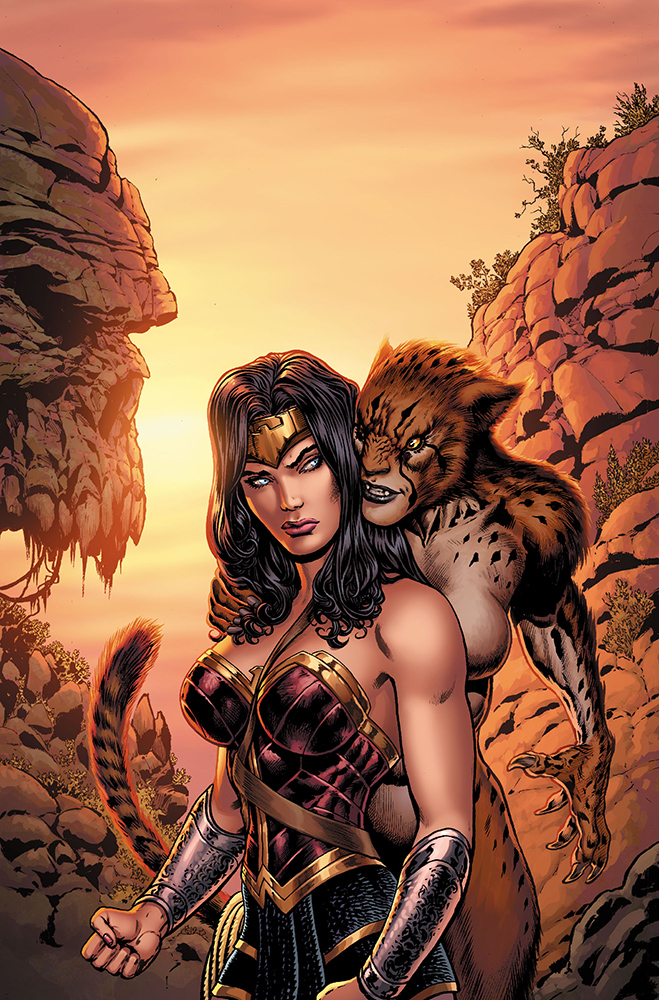 Rebirth saw Barbara Ann reinvented yet again, with her power once more granted to her by the plant god Urzkartaga. In this incarnation, however, she’d been friends with Wonder Woman prior to her curse, and blamed her fate on Diana not being able to save her.

Diana agreed to kill Urzkartaga in exchange for Barbara Ann’s help in locating Themyscira, which had been veiled from her. She succeeded, allowing Barbara Ann to transform back into her human body.

The reversal, however, was only temporary. Urzkartaga managed to possess another host, which forced Barbara Ann to submit herself to becoming the Cheetah again, lest both Etta Candy and Steve Trevor be killed. She then succumbed yet again to her cannibalistic urges, forcing Diana to subdue her.