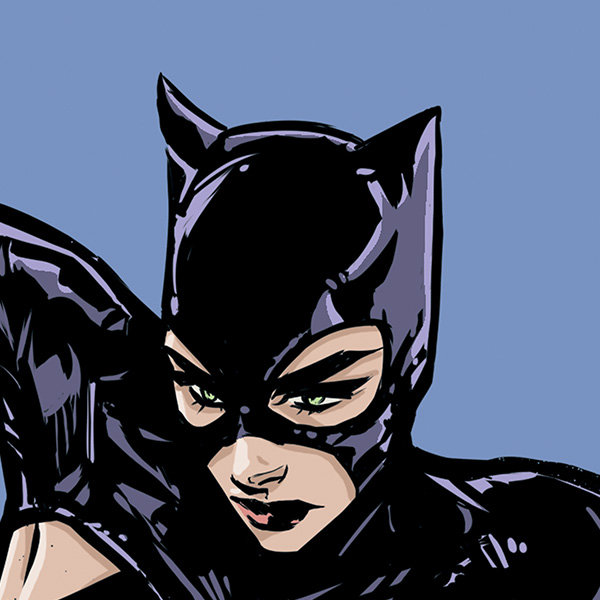 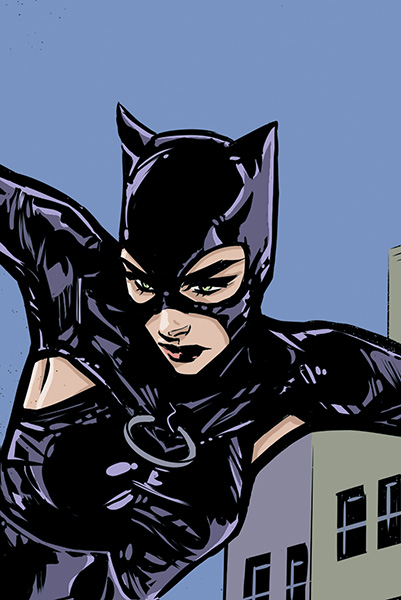 As deadly as she is beautiful, infamous cat-burglar Selina Kyle uses her nine lives to walk the razor's edge between light and darkness in Gotham City.

As deadly as she is beautiful, infamous cat-burglar Selina Kyle uses her nine lives to walk the razor's edge between light and darkness in Gotham City.

The Bat may be the king of the beasts of Gotham. But the Cat? The Cat is definitely the queen. Infamous burglar Selina Kyle is certainly one of the most iconic characters in the DC Universe -- not because she's a Super Hero, per se, but because she's so good at stumping them. Motivated partly by her own self interest, partly by the fun of it all, Catwoman has been baffling Gotham City's heroes, both masked and unmasked, from the very beginning.

An accomplished jewel thief and an occasional hero herself, Selina's murky moral compass has made her relationship with Batman complicated, to say the least. Still, the undeniable magnetism between Bat and Cat is one of Gotham's most reliable constants: wherever Catwoman goes, Batman is sure to follow, if only to take her down. Bruce and Selina have been playing their complicated game of cat-and-mouse for a long, long time. 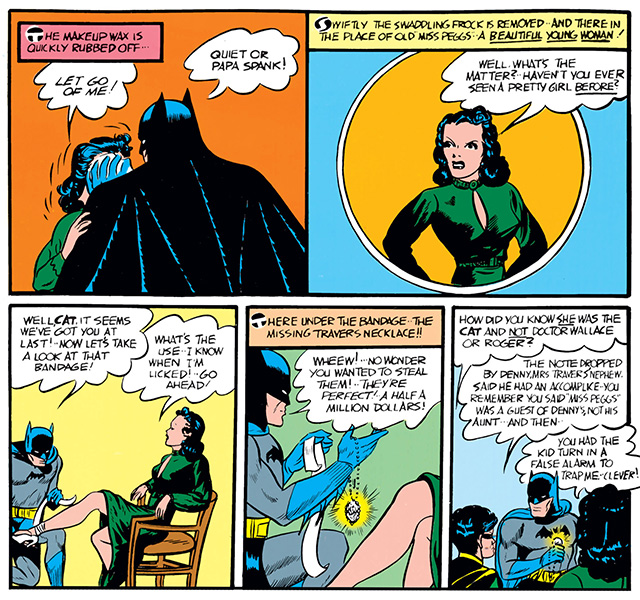 Selina's personal history and origin story is a matter of some debate, even for her closest friends and associates. It's understood that she had a rough, isolated childhood spent largely in and out of foster care or orphanages, where she learned to lie, cheat and steal through the day to survive. As she grew older, she perfected her skills until she finally begin crafting her alter ego Catwoman.

Selina's family history had always been a mystery to her, until she began pulling at threads that lead her to uncover the truth: she was actually the daughter of one of Gotham's most notorious crime lords, Rex Calabrese. Calabrese attempted to have Selina killed by having her shoved off a roof, but she managed to not only survive the fall but slowly follow the trail of clues that lead back to her heritage -- all while becoming one of the most accomplished thieves in Gotham. 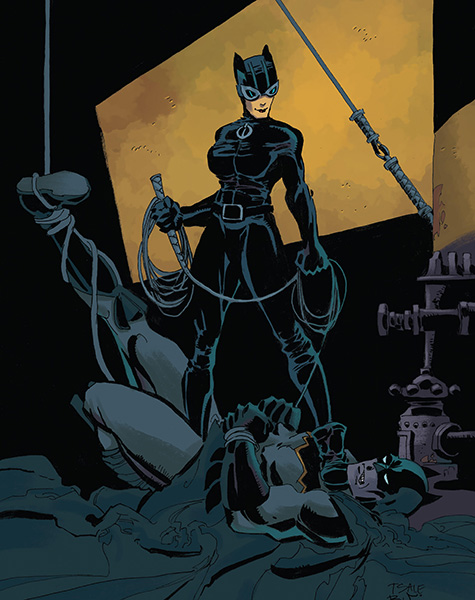 Selina has no true metahuman abilities and instead relies on her peak human reflexes and agility to aid her in her schemes. She is a master burglar, gymnast and acrobat with a mastery of both hand-to-hand and weapon based combat. She is deadly with a bullwhip, which she usually keeps tied around her waist as part of her costume -- which also includes razor-sharp, retractable claws as part of the gloves, allowing her to cut through glass. 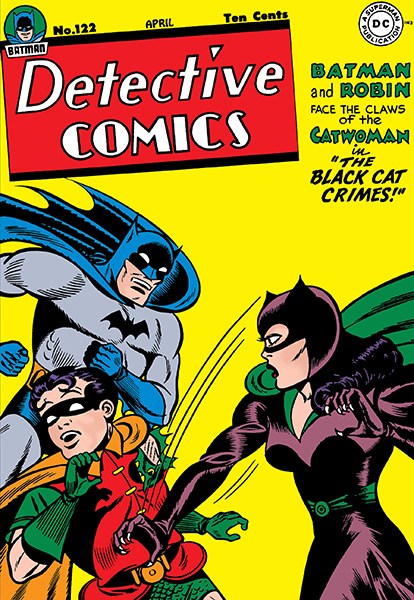 Selina was introduced in BATMAN #1 (1940) known only as "The Cat," a burglar and master of disguise who Batman would begin to recognize as a repeat offender in Gotham City -- though her antagonistic relationship with the Caped Crusader always painted her more as a femme fatale than a proper villain. During the earliest BATMAN issues, Selina is repeatedly thwarted by Batman, but manages to escape at the last minute each time.

She was given her first proper backstory ten years after her introduction in BATMAN #62 (1950) which established she was an amnesiac who had worked as a flight attendant during a flight that had crashed. The story, however, was later proven to be a lie Selina had made up in order to garner sympathy for her life of crime. Later, in the mid-50s, Selina briefly "reformed" from her life of crime, but her stories didn't pick up on this new leaf for several years.

In the mid-'70s, following the formal establishment of the Multiverse, Selina's reformed, Golden Age self was revealed to have entered into a committed, loving relationship with Batman in the alternate reality of Earth-2. She had Bruce had a daughter named Helena Wayne who eventually became a vigilante in her own right, Huntress, and continued to fight side by side in wedded bliss.

Meanwhile, on the "main" Earth, Earth-1, Selina and Bruce continued their flirtatious but often contentious relationship and endless game of cat-and-mouse.

Selina's Earth-One identity was revamped following CRISIS ON INFINITE EARTHS (1986) during BATMAN: YEAR ONE (1986). Her mysterious past was solidified to reveal that she had been a sex worker at the mercy of an abusive pimp. The violence she had endured just to survive taught her to fight while simultaneously instilling a fiercely protective streak in her, prompting her to take in and defend fellow battered women. During her time on the streets, she met a young woman named Holly Robinson who would become one of Selina's chief motivations for her turn to burglary.

To protect and provide for Holly, Selina began crafting her identity as a masked thief, taking what she and Holly needed to keep themselves safe and fed. Through these minor crimes, she came in contact with Batman and was inspired to invent her Catwoman persona.

Selina was eventually given her own solo ongoing series, CATWOMAN (1993), which continued to flesh out her backstory and establish her relationship with Batman. She worked chiefly as an international jewel thief, but regularly returned to Gotham to participate in various major events such as 1994's KNIGHTFALL storyline, which saw Bruce wounded and temporarily replaced by Azrael. Selina regularly arrived to lend a hand, despite her self proclaimed disinterest in heroism, during Gotham-based catastrophes in storylines like "Contagion", "Cataclysm", and NO MAN’S LAND.

Selina's lack of "official" allegiance often earned her the unwelcome attention of not just the GCPD, but many of Gotham's costumed criminals, who she would regularly steal from or betray. Selina was regularly investigated by, and occasionally partnered with private investigator Slam Bradley, who helped her bring down corrupt GCPD officers after she had been framed (CATWOMAN, 2002).

Despite her marriage to Batman on Earth-Two, the modern day Selina did not learn Batman's identity as Bruce Wayne until he unmasked himself during 2002-2003's HUSH storyline.  But his trust and the brief, genuine romance shared between them was somewhat short lived. As Bruce began to unravel the manipulations of Tommy Elliot, he began to question whether or not Selina's feelings for him were genuine, and if he had made the right choice in sharing his secret. Feeling as though there could never be true honest between them, Selina chose to leave Bruce and continue her life of crime and vigilantism on her own.

Shortly thereafter, Selina was forced to confront Black Mask, who had, in an effort to close in on Selina personally, killed her sister Maggie’s husband, and tortured Maggie to insanity (“Relentless,” 2002). In their final confrontation, Selina compromised her moral code and shot Black Mask, killing him and spinning Selina into a major internal crisis (CATWOMAN #52, 2006).

Following 2005's INFINITE CRISIS and the subsequent "One Year Later" time jump, Selina gave up the mantle of Catwoman for a brief period, allowing Holly Robinson to take on the role instead. It was revealed that during the year away, Selina had been pregnant and given birth to a daughter (who she named Helena, as a metatextual nod to her daughter with Batman on Earth-2). However, when pressure to return to her life as Catwoman began mounting, Selina gave Helena up for adoption. In an effort to save herself from the grief, she asked Zatanna to modify her memories and remove Helena entirely -- but Zatanna refused.

Selina and Batman reconnected upon Selina's volunteering to join his latest incarnation of The Outsiders. It was somewhat short lived, however, when Tommy Elliot aka Hush returned and gravely wounded Selina before stealing her heart from her body. Dr. Mid-Nite and Mr. Terrific were able to keep Selina alive on life support until Bruce was able to track Hush down and retrieve her heart. The surgery to replant it within her chest was a success, and Selina made a full recovery (in 2008's "Heart of Hush" storyline).

Selina did not so easily forgive Elliot, who she tracked to the jungles of Vietnam and tortured in order to exact her revenge. At the end, she refrained from killing him, and instead delivered Hush safely back to Gotham.

Following Batman's "death" (in 2008's FINAL CRISIS), Selina joined with Poison Ivy and Harley Quinn to form the "Gotham City Sirens" team, which split its time between fun, profit, and patrolling the streets of Gotham in Batman's wake. 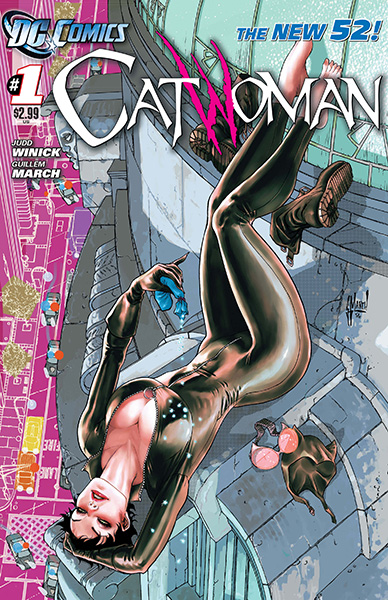 Following the continuity reimagining of 2011's FLASHPOINT, Selina's history was completely rewritten. An orphan placed into a corrupt group home that forced children to steal, Selina learned the tricks of her trade at a young age before adopting her Catwoman identity.

Her focus was on Gotham-based crime, specifically the crime syndicates, which she eventually toppled and instituted herself as kingpin in 2014's BATMAN ETERNAL. During this time, it was revealed that Selina's father was actually the notorious Rex Calabrese, a powerful mafioso who's seat Selina was able to take. As head of the Calabrese family, Selina temporarily shed her Catwoman costume and identity and instead focused her attention on running Gotham's underworld bureaucratically. The Catwoman mantle was temporarily handled by Eiko Hasigawa, the heir of a rival crime family (in 2015's CATWOMAN ANNUAL #2). 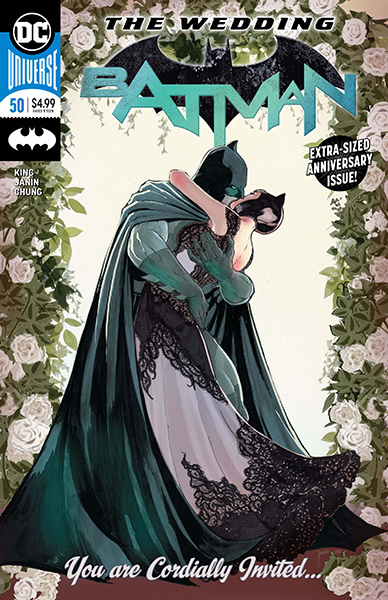 Following 2016's DC UNIVERSE REBIRTH #1, Selina returned to her life as Catwoman, leaving the kingpin position of Gotham's crime families up for grabs. However, shortly after she returned to the streets, she was arrested and sent to Arkham Asylum. She was accused of murdering over two hundred people (in 2016's "I Am Suicide" storyline).

Batman eventually broke Selina out in an effort to recruit her for a mission to the island of Santa Prisca. The two began an intense flirtation and reconnection, picking up old threads that they had both tried and fail to bury in the past, that eventually culminated into a marriage proposal. Selina hesitated to give an answer, and instead waited for Bruce to confess what he believed to be his greatest sin -- an event called The War of Jokes & Riddles -- that had happened when he had first picked up the cowl before she would respond (in 2017's "The War of Jokes & Riddles" storyline).

Despite saying "yes" to Bruce's proposal, and despite being willing to fight Talia al Ghul, one of Bruce's ex-lovers, for the honor of marrying him, Selina eventually changed her mind, deciding that putting Batman in a position that allowed him to be happy would essentially "kill" his will to continue his crusade (in 2018's BATMAN #50). Selina left Bruce at the altar, and ran to the border town of Villa Hermosa In CATWOMAN #1 (2018) to start a new life — and to look after her sister Maggie, still traumatized by her encounter with Black Mask. 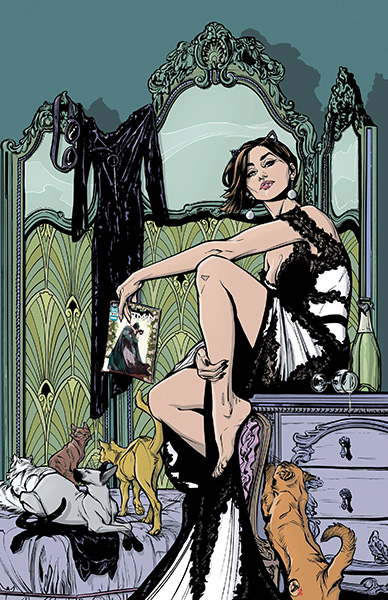