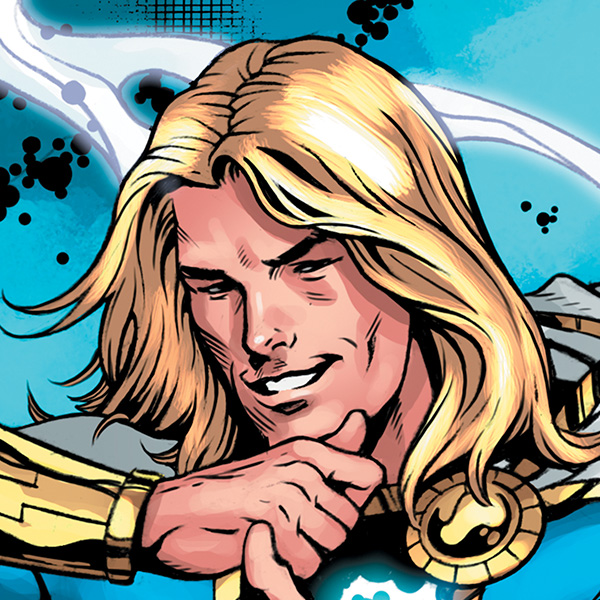 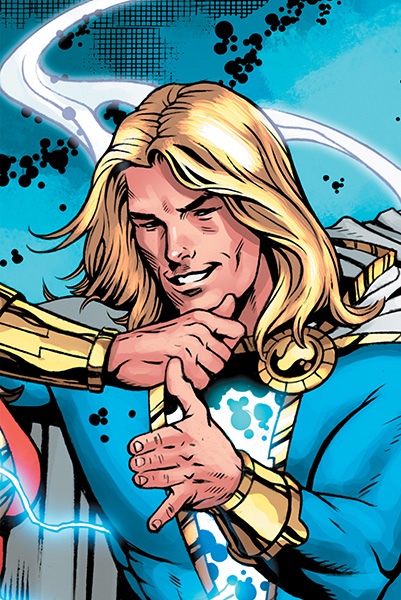 Captain Marvel Jr. -- also known as Shazam Jr. -- is powered by the same magic that flows through his best friend Billy Batson, better known as Shazam!

Captain Marvel Jr. -- also known as Shazam Jr. -- is powered by the same magic that flows through his best friend Billy Batson, better known as Shazam!

The DC Super Hero formerly known as Captain Marvel (now known as Shazam) was able to share his powers with many people, forming a family of fellow heroes. Among his most trusted and close lieutenants was Freddy Freeman, a young man was became seriously injured during a battle between Captain Marvel and the evil Captain Nazi. When ordinary medical care could not save his life, Billy Batson shared a portion of his powers with Freddy, in an effort to heal him. It did that, and so much more. Now, whenever Freddy said the name of his idol Captain Marvel out loud, he would transform into a Super Hero himself, named Captain Marvel Jr.

Captain Marvel Jr would have all the same powers as the original Captain Marvel, but unlike Billy Batson, he would remain his youthful self and not transform into an adult when saying the magic words. Sadly, while in mortal form, Freddy would also remain crippled from the injuries sustained from being caught in the crossfire of the battle. Freddy served faithfully at the side of his mentor and his sister Mary for many years, and for a time he even replaced him when Billy Batson became the new Wizard at the Rock of Eternity. In the post-FLASHPOINT reality, Freddy Freeman is actually Billy Batson's foster brother, and goes by the name Shazam Jr., as part of a larger, extended Shazam family. 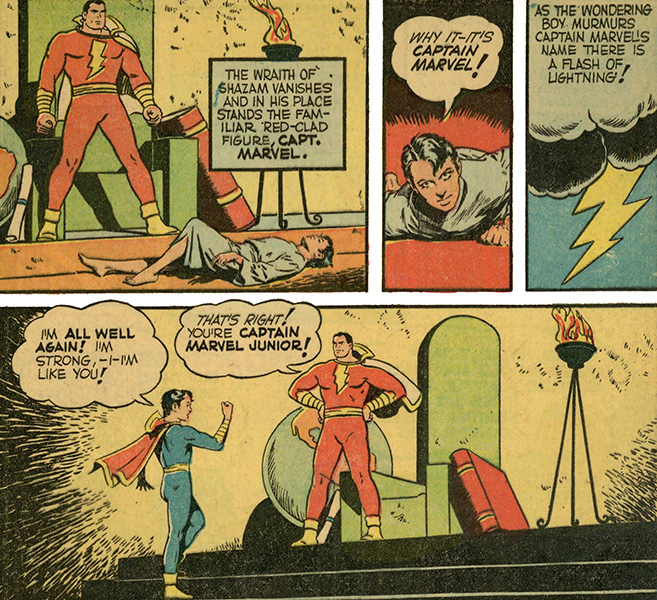 In the early 1940s, an elderly man named Jacob Freeman and his grandson Freddy went on a fishing trip on a lake, when they were both embroiled in an epic fight between Captain Marvel and his nemesis, Captain Nazi. One solid punch from Captain Marvel knocked Nazi straight into the lake, and the Freemans then brought the unconscious man into their boat to save him from drowning. But when Captain Nazi came to his senses, he threw Jacob into the lake, and tossed Freddy out of the boat with an oar. Although Jacob died, Captain Marvel was able to save an unconscious Freddy and brought him to a hospital for emergency medical treatment.

After being told that Freddy would probably not make it through the night, Billy Batson then spirited Freddy away from the hospital, and took him to the secret underground throne room of the wizard Shazam, from whom Billy derived his powers. Feeling partially responsible for what happened to Freddy, Billy then asked the Wizard to save Freddy's life, but he cannot uses his powers to reverse the damage that was done to him. But the Wizard then informs him that he can pass along some of his powers to Freddy, which will allow him to live, and also to become a super-powered champion.

When the unconscious Freddy awakens, he sees Captain Marvel, and by saying his name out loud, he is instantly transformed into a younger version of the Captain. Unlike Billy Batson, Freddy remains a teenager when he transforms, and takes on the name Captain Marvel, Jr. Now with all the same powers as his adult counterpart, Captain Marvel, Jr. becomes his partner in crime fighting. Sadly however, when he transforms back into regular Freddy Freeman, he is now a cripple due to his injuries, and is only able bodied in his super heroic identity. As a mortal, Freddy's left leg is permanently injured, and he must now walk with a crutch.

Captain Marvel Jr. would have many adventures during the Golden Age, with both the adult-presenting Captain Marvel and also as a solo hero. Eventually, he and the rest of the Shazam family would get caught in a trap by the evil Doctor Sivana, where they were stuck in suspended animation for decades. Once free from this trap, he resumed his heroic career. He learned during this time that his Earth was one of many parallel worlds in the Multiverse, and that his planet was designated as Earth-S. During this era, Freddy discovered that fellow hero Kid Eternity, who also derived his powers from saying a magic word, is in fact his long-lost brother. When the CRISIS ON INFINITE EARTHS happened, his Earth was folded into a New Earth with Earths 1, 2, and others.

In the post-CRISIS timeline, Freddy Freeman was popular student and athlete at Binder High School, and one of Billy Batson's close friends. One day, at a WHIZ Radio spelling bee which Billy hosted, Freddy and Billy met Billy's long-lost sister Mary, whom Freddy instantly fell head over heels for. From this point forward, Freddy's history played out very similarly to his Golden Age origin story, as he and his Grandpa Jacob were injured during a fight between Captain Marvel and Captain Nazi. Once again, Jacob dies, and Freddy is rushed to the hospital with a severely injured spine and a broken leg.

Freddy is then taken to the wizard Shazam by Captain Marvel, who then grants him the power to become Captain Marvel, Jr. But when Freddy discovers that his grandfather died in the attack that injured him, he loses control and goes on a rampage against Captain Nazi, now with the power of Shazam behind him. Freddy stopped just short of killing Nazi, thanks to Mary Marvel managing to calm him down.

This version of Captain Marvel, Jr. did not get along as well with the other members of the Shazam family as in previous timelines, and in fact he stopped working with them for a time and moved to New York City, leaving Fawcett City behind. There, he began to call himself CM3, as in "Captain Marvel 3," with Mary Marvel being the second designated hero with the powers of Shazam. He joined the Teen Titans for a time, and then later, the Outsiders.

During the events of INFINITE CRISIS, the wizard Shazam was killed, and Mary Marvel's and Captain Marvel Jr.'s powers are taken away. Billy Batson, in the wake of the Wizard's death, was put in charge of the Rock of Eternity, and therefore became the one who made decisions on how its power was distributed. Batson initiated a series of  trials, which if Freddy passed, would allow him the chance to take back his powers, and then succeed Billy Batson and become the new Captain Marvel.

The Lords of Magic were six beings who confer their powers to Captain Marvel—Solomon, Hercules, Atlas, Zeus, Achilles, and Mercury—and they each put Freddy through a particular task, and once he accomplished them, they would grant him their abilities. A powerful sorcerer named Zarab Babak performed as Freddy's guide during these labors, after which he becomes the new Captain Marvel. He serves for a time with the Justice League, and joins with Earth's other defenders during the FINAL CRISIS event. However, after the event known as the BRIGHTEST DAY, Freddy Freeman loses his powers once again, due to the interference of the similarly magic-powered Osiris.

After the events of FLASHPOINT, reality was altered once more. Freddy Freeman was now the child of two convicted criminals, and when his parents went to prison, he was taken into foster care, and found a home with the Vasquez family, who also fostered several other kids. He is seen as the prankster of the family, and he becomes friends with orphan Billy Batson once the Vasquez family takes him in as well. When Billy becomes Shazam, he grants Freddy a portion of his power, and just as in previous timelines, he now wears a blue variation of Billy's costume. Unlike previous timelines however, he now has long blonde hair, and doesn't care for the name "Shazam Jr.," preferring "King Shazam." 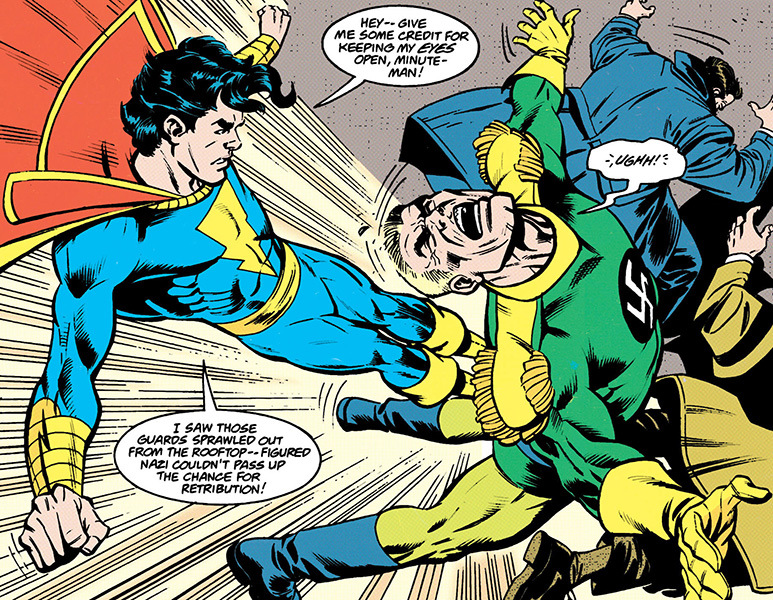 When granted the powers of Shazam, Freddy Freeman has the magically attributed abilities of superhuman strength, durability, speed, and reflexes. He also exhibited the powers of electrokinesis, can deploy an electro-blast, and has limited teleportation abilities, which can take him to the Rock of Eternity at will. He can also fly at great speeds and also has accelerated healing and an advanced intellect.

In the post-FLASHPOINT reality, it is Billy Batson, as Shazam, who grants him the power, so he can also take it away at will. When Freddy is the only hero using the Shazam power, he is at his strongest; but when others members of the family are similarly powered up, he loses a fraction of his abilities. 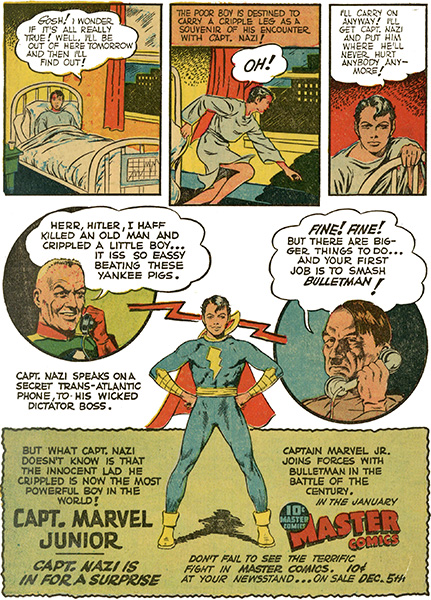 In his first appearance at the dawn of America's involvement in World War II, Freddy Freeman and his grandfather are caught in a battle between Captain Marvel and Captain Nazi. Freddy is gravely injured in the battle, but Captain Marvel is able to confer some of his powers to him, and Captain Marvel Jr. is born, becoming one of Billy Batson's most trusted allies. 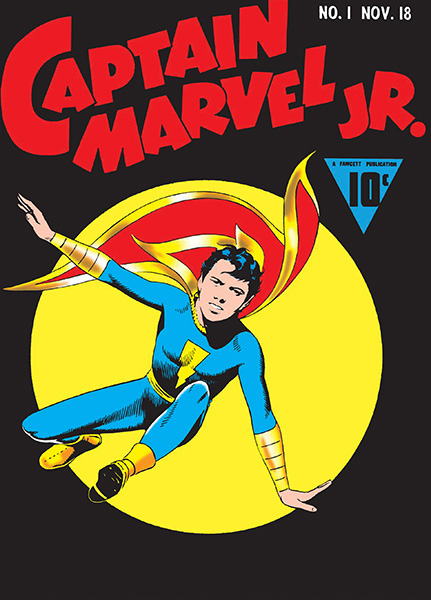 Just a few months after making his debut, Freddy Freeman got his own solo series, which lasted for nine years and 119 issues. The first issue saw his origin retold as to introduce him to new readers, and featured stories where he took on Axis saboteurs and big city gangs. The stories in CAPTAIN MARVEL, JR. were a favorite of a young Elvis Presley, and would later inspire his iconic look and costumes.

This story explains the twenty-year absence of Captain Marvel, Jr. and the rest of the Shazam family of heroes, as we learn that they were all trapped in something called "Suspendium" for two decades. Once they escape, they return to Earth and resume their heroic careers. Although he and his friends were on the parallel world of Earth-S, Captain Marvel, Jr. would later meet the Earth-One heroes of the Justice League, and team up with the Superman family of as well. 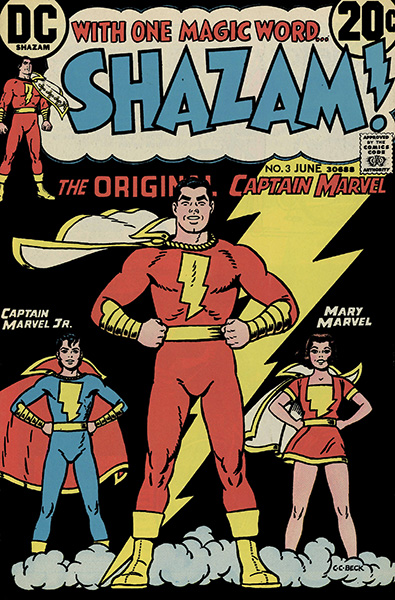 In his first post-CRISIS ON INFINITE EARTHS appearance, Freddy Freeman gets a '90s update to his classic origin story, only this time, when his grandfather is killed by the evil Captain Nazi, the newly powered Captain Marvel, Jr. goes on a rampage in which he nearly kills the villain, but is stopped by Mary Marvel, who appeals to his better nature. 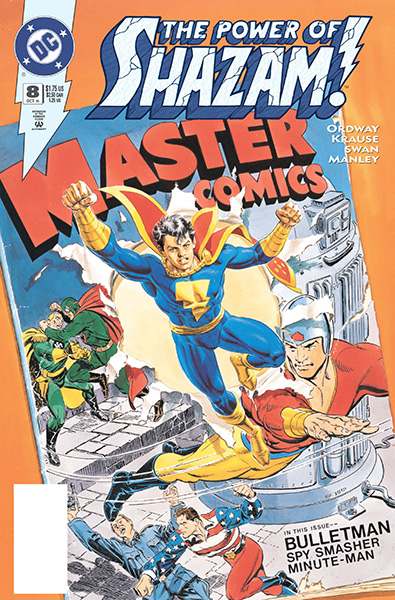 After the Wizard Shazam is killed in the events of INFINITE CRISIS, Billy Batson becomes the new master of the Rock of Eternity, and Freddy Freeman must undergo a series of trials to determine if he worthy to be the new Captain Marvel in Billy's place. The events of this twelve-part limited series would introduce Freddy as the bearer of the mantle of Captain Marvel for some time.

In the post- FLASHPOINT universe, Freddy Freeman is introduced in the SHAZAM back-up stories in the pages of JUSTICE LEAGUE. In the conclusion to the year-long storyline which reintroduced the character to the DC Universe, Billy Batson grants a portion of his power to his foster brother Freddy, who is now called Shazam Jr., though he much prefers the name "King Shazam."