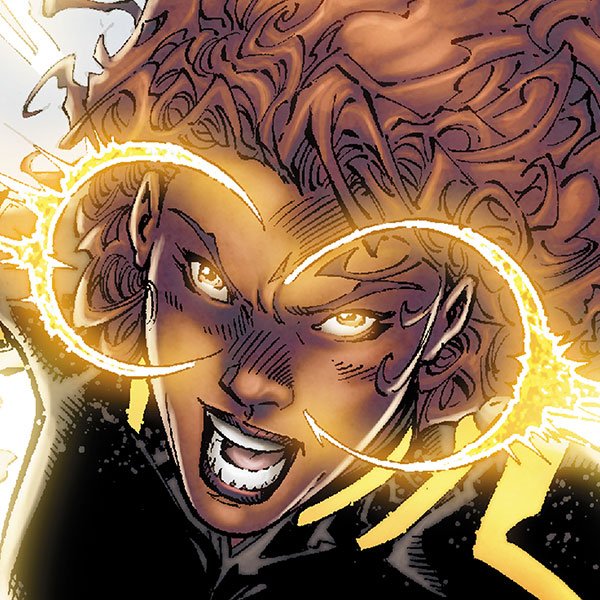 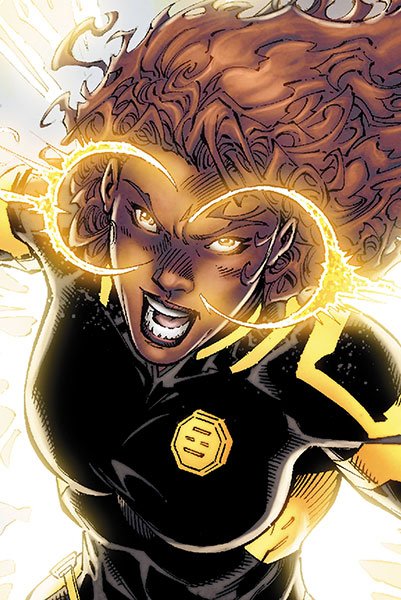 Karen Beecher is the very definition of a self-made hero. She designed and built her very own super-suit—a technological marvel that imbued her with the ability to fly on insect-like wings and shoot powerful "stinger" blasts from her hands. Under the name Bumblebee, she joined the Teen Titans alongside her partner, Malcolm Duncan.

Karen's scientific know-how not only made her a DC Super Hero, it netted her a job at S.T.A.R. Labs; where she worked as an engineer when she briefly retired from saving the world. Brilliant, unflinchingly loyal and ready to adapt to whatever the job might throw at her, Karen has, over the years, become a versatile member of both the Titans and the Doom Patrol. 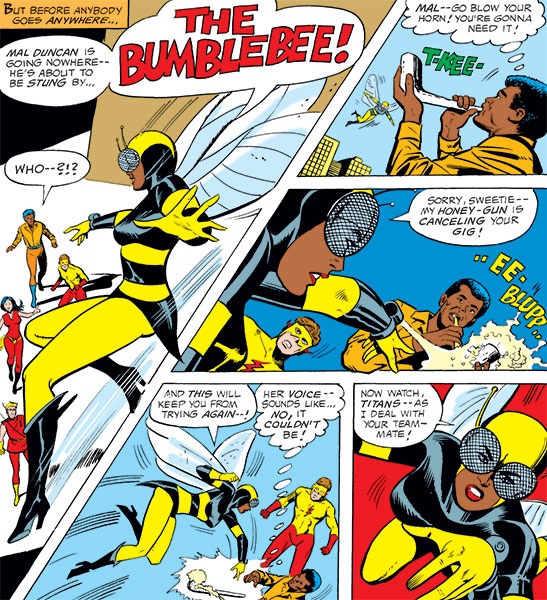 Karen's life as a superhero began as a ruse. Her boyfriend, Mal Duncan, a.k.a. the Herald, was a new member of the Teen Titans and anxious to prove himself worthy of the team. Wanting to help Mal, Karen made herself a costume and took up the name Bumblebee. Pretending to be a super-villain, she attacked the Titans and took a fall— all to make her boyfriend look like he'd saved the day.

Surprisingly, when Karen revealed what she'd done to the team, they were impressed with her skill in crafting her costume and executing her plan. They immediately offered a place on the team alongside Mal, and she officially adopted Bumblebee as her alias.

Karen's powers were first derived from her self-made, technologically enhanced super-suit. Exponentially increasing her physical strength, it allowed her to shoot sonic blasts and "stings" from her hands, and to fly on artificial insect-like wings.

Eventually, however, she was the victim of a science experiment gone wrong—she shrank in size and remained stuck in her shrunken form for some time. Henceforth, in certain continuities, Karen had the ability to shrink and return to full height at will. 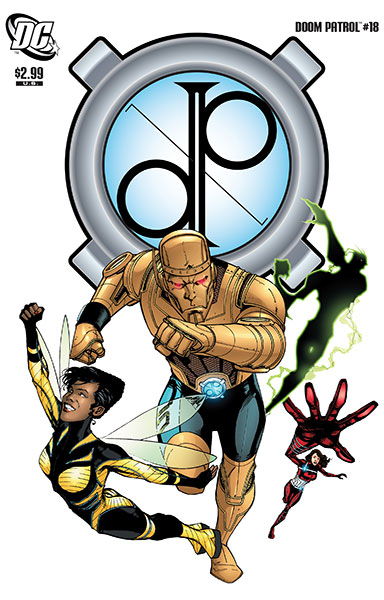 After Karen and her boyfriend, Mal Duncan, joined the Teen Titans, they transferred to Titans West before the short-lived team dissolved. The reprieve from duty allowed Karen and Mal to focus on their relationship, and the two decided to retire from superhero life and get married. At this point, Karen took a job with S.T.A.R Labs, working on the development of non-lethal weaponry.

Both Mal and Karen briefly returned to active duty with the Titans West during the JLA/Titans crossover event, THE TECHNIS IMPERATIVE (1998-1999), but resumed their civilian lives once the Technis threat had been dealt with.

It wasn't until the events of 2005-2006’s INFINITE CRISIS that Karen officially returned to her life as Bumblebee. The Crisis placed both her and Mal in danger and in need of rescue. Adam Strange and one of his Zeta Ray beams eventually saved her, with the beam teleporting Karen out of harm's way. But there were side effects—the beam affected Karen's physiology. The end result? Karen was shrunk down to six inches.

The changes stuck for Karen, and she was forced to seek help from the scientists of the superhero community to reverse her newfound problem. Her search led her to the Doom Patrol and its leader, Dr. Niles Caulder, who solved her dilemma. During this time, Karen and Mal both worked with the Doom Patrol. 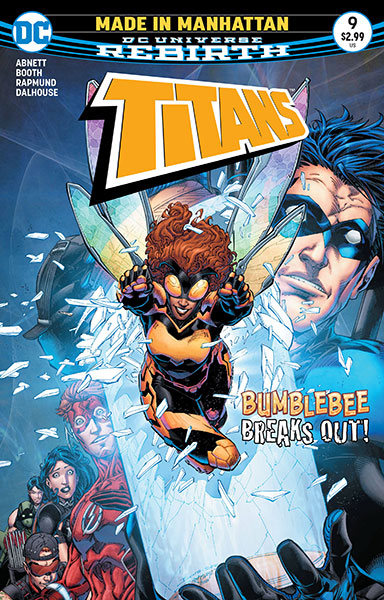 Following the continuity-reshaping events of 2011’s FLASHPOINT, Karen was reintroduced to the DC Universe as a former member of the Titans for the first time in TITANS HUNT (2015). She and Mal were married in this new continuity, though retired from their roles as superheroes.

Karen, however, returned to active duty as Bumblebee, despite becoming pregnant with her and Mal's child. She gave birth following a confrontation with the Titans’ very first foe, Mr. Twister.

Following the events of 2016’s DC UNIVERSE: REBIRTH #1, Bumblebee did not immediately return to the active Titans roster. Instead, she went back to work at S.T.A.R. Labs while raising her child. It wasn't until the Fearsome Five launched an attack on her friends that Karen was pulled back into action, albeit temporarily, in 2017’s TITANS vol. 3 #10.