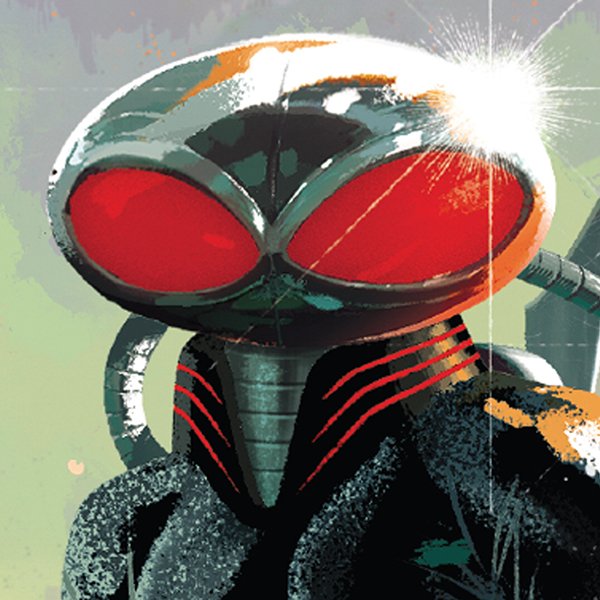 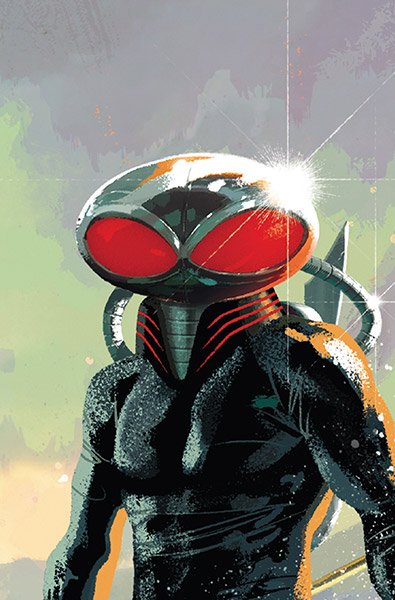 Aquaman's greatest enemy is the scourge of the seven seas, David Hyde, whose heart is as cold as the ocean depths he hunts. 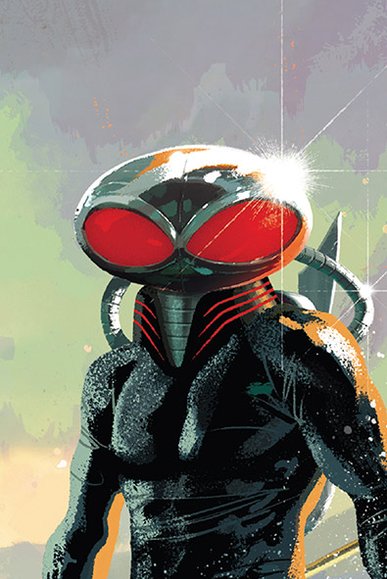 Aquaman's greatest enemy is the scourge of the seven seas, David Hyde, whose heart is as cold as the ocean depths he hunts.

Considered one of Aquaman’s greatest enemies, Black Manta has a singular hatred for the King of Atlantis. For decades, Manta’s true name and motives were shrouded in mystery, hidden behind his menacing oversize helmet. In modern times, however, his true motivations have been revealed.

But no matter the era, Black Manta has always inflicted a special kind of pain upon his archenemy, cementing his reputation as one of the most ruthless and driven criminals in DC history.

Black Manta was the scourge of the Seven Seas, and Aquaman’s greatest foe, for decades before any information was revealed about who he really was. Even when he committed his greatest act of villainy—killing Aquaman’s infant son, Arthur Jr.—his motivations for such an act were very much a mystery. Hidden behind a menacing black helmet, no one knew anything about the high-tech undersea pirate, except that he was not to be underestimated.

The young child who would take the name Black Manta was born in Baltimore, Maryland, near the Chesapeake Bay. One day, while playing by the water as a boy, he was kidnapped by pirates and forced to work as a slave on one of their ships. Abused by his captors for an unspecified amount of time, he spotted a young Aquaman and a group of dolphins in the ocean. He signaled for rescue, but was not seen. He subsequently killed one of his captors, but never forgot how, in his eyes, the King of the Seven Seas had rejected his plea for help. From that day forward, Aquaman was his enemy.

It should be noted that, during this time, Manta had given a different account of his troubled childhood. Instead of coming from Baltimore, he was said to have grown up in Gotham City. An autistic child, he was, for reasons unknown, placed in Arkham Asylum. There, he preferred to be immersed in cold water rather than a comfortable bed.

The staff at Arkham, not knowing how to cope with his autism, chose to administer an experimental treatment that would cure him. While it seems his autism was cured, the treatments made him excessively violent. Not long after, he killed the scientist who administered the procedure and escaped Arkham, beginning a life of crime.

At some point, Manta would gain significant technical knowledge and he designed his infamous helmet, which allowed him to survive underwater depths no surface-dwelling human could, and which could shoot out deadly plasma beams. He also designed for himself an advanced submersible vehicle based on the deadly manta ray, his namesake.

At one point, Manta discovered he had a son. And it turned out there was another wrinkle to his backstory that had been kept a secret: prior to becoming a villain, Manta was a treasure hunter near the Bermuda Triangle. He was also married. While treasure hunting, Manta and his wife were captured by the water-breathing inhabitants of Xebel, another dimension.

The pair was tortured horribly by the Xebel. Experiments were performed on Manta’s pregnant wife, resulting in her son being born with the power to breathe underwater and to create hard-water constructs. The princess of Xebel (Aquaman’s future paramour, Mera), fearing her people would use the infant for evil purposes, took him to Earth. There, the child was raised in the surface world, and Manta had no idea what became of him. Eventually, Manta escaped Xebel and returned to Earth, but his wife died. His son, Jackson Hyde, would grow up to become the second Aqualad.

Following the events of Flashpoint, Black Manta’s history was altered. The new Manta was given a much more understandable reason for his hatred of Aquaman. Manta’s father was tasked by a scientist to procure a sample of young Arthur Curry’s blood, to prove whether he was truly Atlantean. During the attempt, Curry’s foster father, Thomas, leapt to his son’s defense, but died of a heart attack. Vowing revenge, young Arthur attacked the boat of the man whom he felt was responsible, accidentally killing Manta’s father. With both their fathers gone, the two young men became blood enemies.

Manta’s suit allows him to survive extreme pressures and temperatures underwater, and to breathe underwater. It includes a jet pack and a telepathic scrambler, which keeps Aquaman’s underwater telepathy at bay during confrontations. Black Manta also has an arsenal of deadly weapons at his disposal, including a trident, a harpoon gun and powerful energy beams that shoot from his helmet.

Black Manta’s first appearance was in AQUAMAN #35 in 1967. It should be noted that although he first appeared in this issue, he was already described as an “old enemy” of Aquaman’s; having supposedly faced the Sea King already in multiple encounters. This story showcased Manta kidnapping Aquaman’s son Arthur Jr. Although he is saved, a decade later, Manta would kidnap him again, and this time murder him. This first Black Manta story also featured Ocean Master, and the two shared a cover. Interestingly, to this day, both are considered Aquaman’s greatest villains. 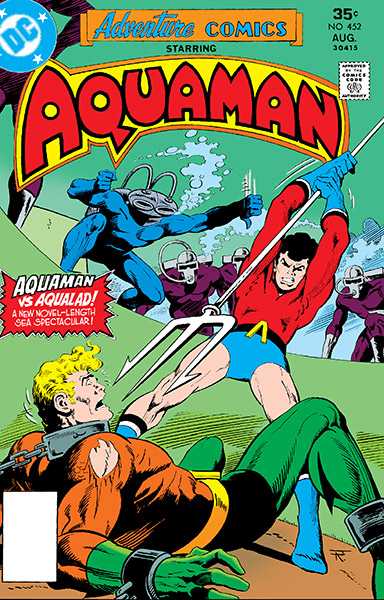 Ten years after his first appearance, Black Manta would commit an act that was unthinkable to most villains at the time. Manta would once again kidnap Arthur Jr., who was given the nickname Aquababy. He placed the child in a bubble which he slowly filled with air, as the Atlantean could not breathe anything but water. Manta forced Aqualad and Aquaman to fight in exchange for saving the boy’s life, but he ultimately died. Enraged, Aquaman tracked down Manta, but his code of ethics prevented him from killing him. Because of this, his queen, Mera, left him, launching the darkest chapter in Aquaman’s life.

It should be noted this was also the first time that Black Manta removed his helmet, revealing his true face, that of an African-American man. At first, he stated his use of the name “Black Manta” was a reference to his race, and that he sought to conquer the oceans for his people. But these motivations were later rewritten or ignored.

The demon Neron made a pact with various Super-Villains for their souls, in exchange for augmenting and increasing their powers to help them defeat their foes. Black Manta was made into a human-manta hybrid creature with greater underwater abilities, rendering his battle suit unnecessary. Despite these augmentations, he was still no match for Aquaman, and would eventually revert to his human form.

In the New 52 universe, Manta was given a new history, one in which he was a treasure hunter, following in the footsteps of his late father. He searched the Seven Seas for ancient Atlantean relics, which brought him into conflict with Aquaman and the mysterious “Others,” a group of heroes wielding ancient Atlantean weapons. 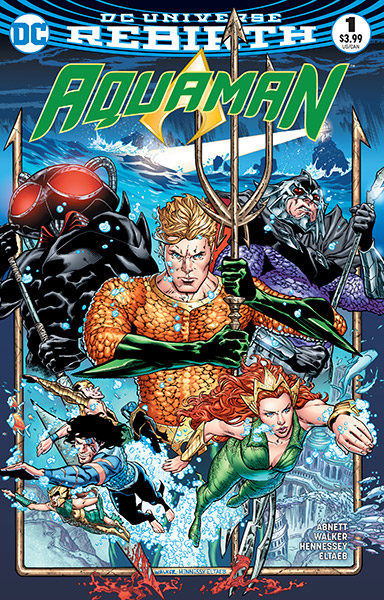 Following the events of DC UNIVERSE: REBIRTH #1, David Hyde still found himself obsessed with destroying Aquaman, although which elements of his backstory hold true remain unknown (in the Rebirth timeline he did not kill Arthur Jr., because the child has yet to be born). When Aquaman opened up an Atlantean embassy, Manta posed as a reporter and infiltrated it, planting explosives and killing humans and Atlanteans alike. Impressed by his act of terrorism, the anti-Atlantean group N.E.M.O. recruited Manta. Eventually, Black Manta killed the group’s leader, the Fisher King, and assumed control of the organization.